In commemoration of international women’s day, I recommend a 2015 Mollie Gregory book titled Stuntwomen: The Untold Hollywood Story. There is a shocking and moving passage by the titular woman of this article. She used to be a martial arts actress in Hong Kong movies. She should have been the British equivalent to Cynthia Rothrock (whose birthday is March 8), but she ended up being relegated to that of a stunt performer in Hollywood. What she’s been through is still better than what befell Anne Winton. I don’t want to create a stolen thunder situation for Mollie, so I will only use some of the quotes… 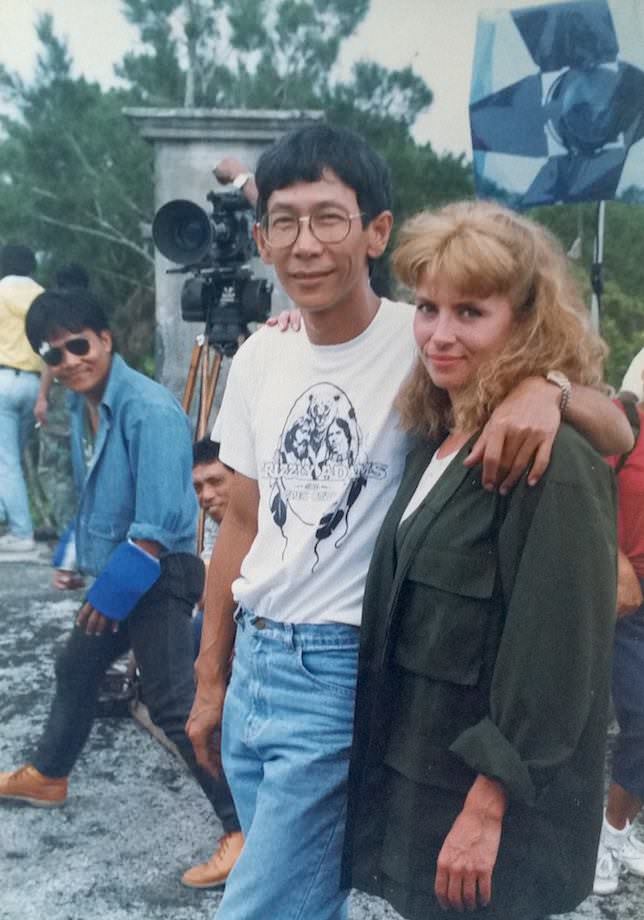 Sophia says: “Hong Kong was a British colony, everyone knew the lease was up and they felt empowered. Toward me, the team had two faces. Sometimes, I went to karaoke bars with them, but as much as I practiced martial arts and studied Cantonese, on the set – I felt segregated. No one would talk to me; it wasn’t the right thing to do. I was the gweilo – white ghost. The pay was crap, no union, no adjustments, no overtime, but I was thankful to be there. I didn’t care if people were unfriendly.”

It gets worse: “One director screamed in my face, swearing, spitting. They were hard on us gweilos. I was so new that they lost patience. Why did they bother with me? A director told me that I didn’t have the best technique, but I had heart…I fought with passion. In a fight, you have to get into that moment just as a good actor gets into the moment of the scene. Over those five years, I improved dramatically. I was tenacious; I stuck it out.” 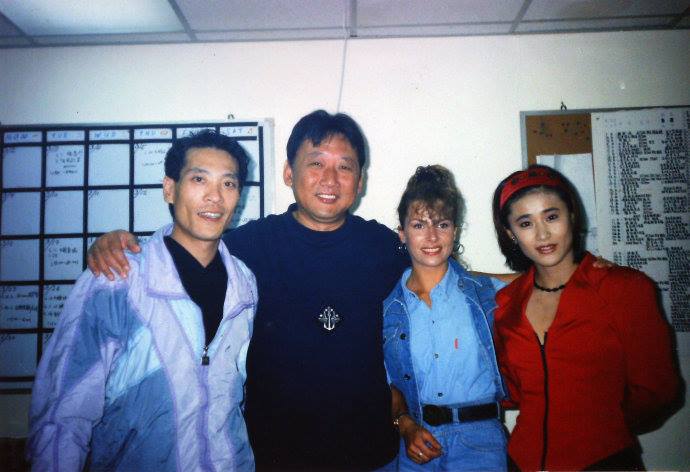 Yukari Oshima was nice to her. She invited Soph to join her all-Asian stunt group: “She was a real stuntwoman and she inspired me. She created her unique fighting style out of her personality and taught me a combination of martial arts, stunt skills and acting. The girls fascinated me. Yukari, Moon Lee and Sibelle Hu – I wanted to be like them.” 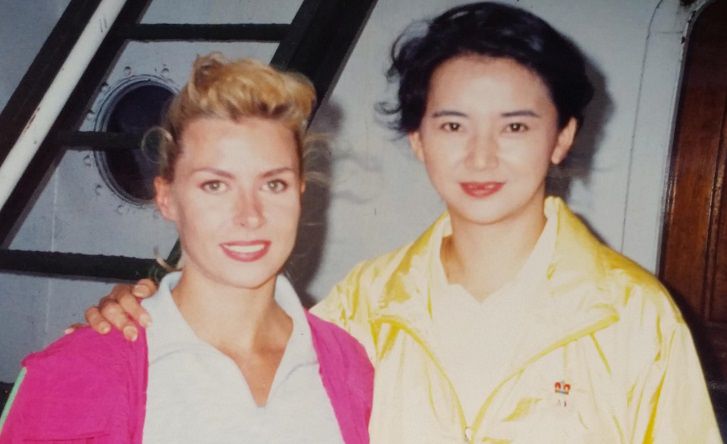 In another book about such women, she gave her most comprehensive interview for Chris Watson. Like how I don’t want to be seen as stealing Mollie’s thunder, I don’t want to be perceived as bottling lightning: “I knew I needed a job, so I got one at the Central Plaza Hotel in Bangkok. My job was to teach the staff English. The hotel gave me a modeling assignment, which was a small brochure. After that, the agency that got me that job asked me if I wanted to be an extra in an American production called Kickboxer (1989) with Jean-Claude Van Damme. They were looking for Caucasians to be in a bar and fill up the background. I was always very sociable. I loved talking to the crew and everybody, so I got to chatting. One guy said “Why do you want to do movies in Thailand? You’re not going to be able to do movies in Thailand. You are British; you have a British passport don’t you? Why don’t you go and work in Hong Kong?” Bingo! I could work in H.K. without worry about a special visa.” 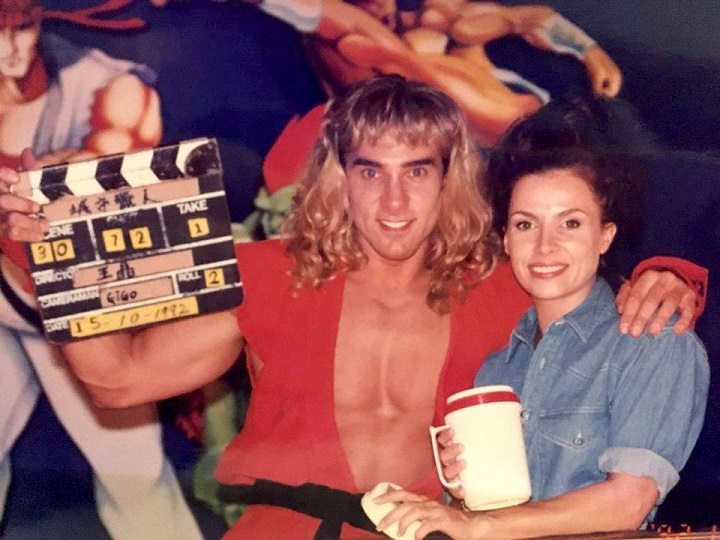 The habitat: “There were several excellent Western martial arts guys working there. There was a void of women, but there was a call for women. They needed Western women to beat up! I was very willing to learn something new, so I practiced martial arts, gymnastics and stunts with the H.K. stunt guys plus a few of the local Westerners. I would often train in Kowloon Park with Rambo Kong or in the gym with Michiko Nishiwaki. Occasionally, I would train a little with Gary Chow in his class. I started learning fighting skills for camera. I also had the opportunity to train with Yukari Oshima. She became my mentor and manager. She taught me about intensity. She showed me how to use acted power and expression in my fights. We had very few actual conversations. She didn’t speak very good English and my Cantonese was pretty poor. It didn’t matter because we were able to get along on a level that didn’t require it. Sign language, laughter and a love of action was enough for us to have a mutual understanding.”

Her favourite H.K. experience was The Big Deal (1992): “I loved it. Everything in H.K. was over the top, whether you were fighting or acting. I got to play a character who could be wild. It was meant to be fun. It was a goofy comedy. Everybody was in such good spirits when they were working on it. There was a lot of laughter on set. I didn’t feel any of the racial tension that I felt on other sets. My salary had gone up, so maybe people respected me more and treated me better. The whole scene in the playground took a long time to film. We went back and forth, back and forth. It was the first time I got to do comedy. I really loved just being an idiot.” 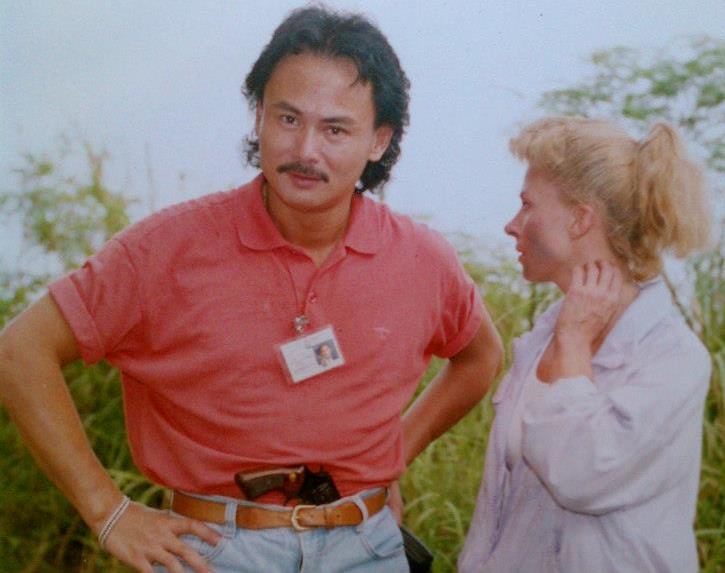 Gordon Liu: “I absolutely love him. We were actually friends in H.K. We hung out sometimes and had some great chats because his English was quite good. Really, I think that he just liked to practice speaking English with me. He has a sweet heart and wasn’t prejudiced at all. He’s a lovely, generous man.” 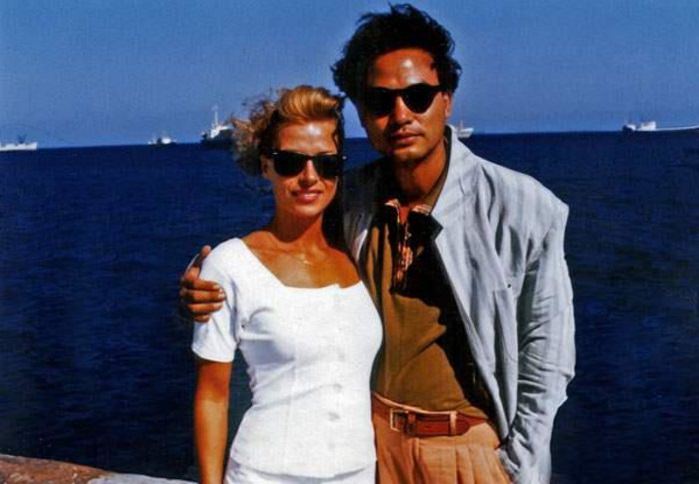 Simon Yam: “I was in love with Simon for years. At one time, I had a huge crush on him. I’m a big fan of his work, and I think he’s a terrific actor. I loved working with him because he had a sense of humour!”

Moon Lee: “We started off on rough ground when I did my first film, New Killers in Town (1990). Moon got frustrated with me because I was brand new. I was trying to get through the choreography, and I kept making mistakes, so she kicked me in the throat. She didn’t apologize, and laughed about it. The crew followed suit, and pretty soon everyone was laughing at me. That just made me fighter harder and probably got a better performance out of me. It was humiliating stuff like that which set a fire under my butt. You can humiliate me, I’ll take it; but I’ll just train harder and be better. The next few films that Moon and I did together, she could see that I was progressing, training hard and getting better. We started to fight better together, much more fluid. We weren’t really good friends, but we were sociable and worked together well.” 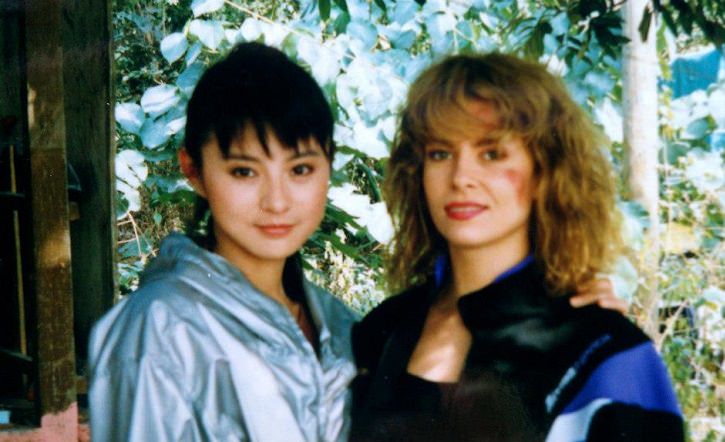 The aforementioned racism: “The bar is set very high in H.K. Being a white woman and being new to martial arts came with a huge amount of criticism. When I had to go to an audition, I would sometimes doll-up a bit in skirts and high heels. I remember getting kicked in the street once by a man saying Go back home! There was that underlying tension towards me at times that I was different from anywhere else on my travels. I got lots of dirty looks and even spitting at me on occasion. It was always from the older generations. The younger kids didn’t seem to care. I guess because they were already steeped in Western culture. I met many different kinds of people in H.K. Some of them were amazing and others were not.”

The scene whose budget was slashed like a tire in Cyprus Tigers: “The fight in the garage was fun. Simon was great to work with. I had a laugh falling on top of him. He is a really good sport. After spending so much time shooting Simon and Joey Wong, we only had a few hours left to shoot my fight. This was just one of those little fights and then that’s it. I did many of those.” 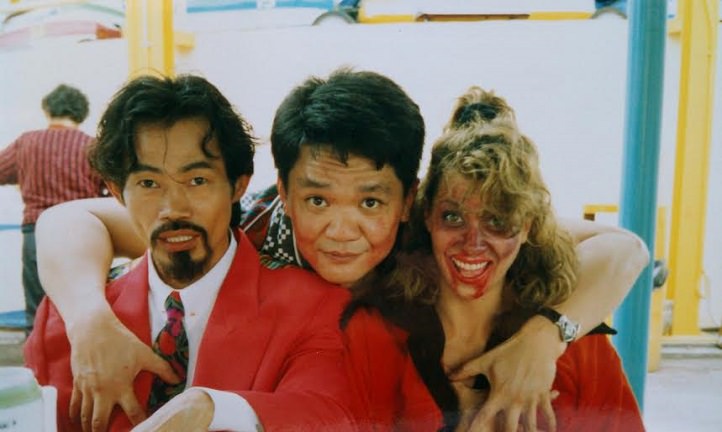 Why the pay-off doesn’t justify the build-up: “We simply ran out of time. They spent so long on the build-up that when we finally got into the garage, there was no time left for a big fight. Many of the locations were not paid for. I don’t know if this one was or not. Most of the time, they don’t have permits and some of the locations where we shot were run by Triads. In the beginning, I was always paid in cash. I would look around set and find the guy who was supposed to be paying people. He would pull out a roll of cash from his pocket and pay me. There were never any cheques. I don’t know where the money was coming from, and I never asked. There were no unions to protect you, so you had to look out for yourself. They shot quickly with very little set-up time. It was a really a rag and bones production. I think that’s why many of the movies during this time were so creative. There weren’t a lot of producers or head of studios coming down. Everybody had a free-for-all and did what they wanted. Sometimes, it would work and sometimes it wouldn’t.”

Story of the Gun: “I broke my foot during the fight scene in the building. It was a stupid thing because it was a tiny gag. They shot my character in the leg to cover it. Being an inexperienced stunt performer, at the time, I didn’t clear the area. All I had to do was jump through a hole in the wall. When I landed, my foot rolled over a rock, and I snapped a bone. That’s the first time that I snapped any bone, so I kept going. In a scene with Gordon Liu, I ran down the hill with the broken foot but I didn’t realize it. My foot was so swollen up. After shooting that day, I took myself to the hospital. The doctor put a cast on my foot, but we couldn’t finish the movie without shooting that big end sequence with Yukari and me on the boat. I cut the cast off my foot myself and bandaged it tightly.” 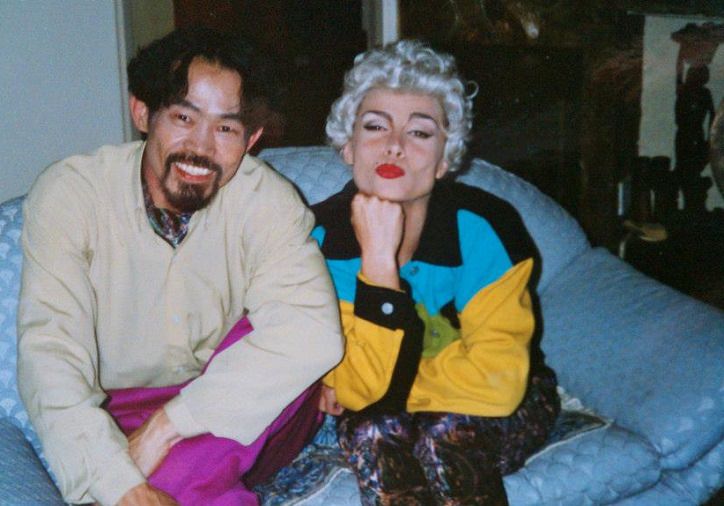 Angel Terminators 2: “I can’t remember how I got that job; I think someone just paged me. I would just take my head-shot from studio to studio and beg personally. At the time of doing this movie, I felt like I was becoming a part of the Yukari and Moon team. It felt good fighting with them now because, the first couple of years, I felt so awkward and uncomfortable doing any fights. Moon and I got on really well during that shoot.”

To learn more about her, read my article about the TV adaptation of Buffy the Vampire Slayer. For those who wish harm against Moon Lee for kicking her in the throat, she did get her comeuppance when Yukari Oshima knocked her out during the making of a 1992 movie titled Kickboxer’s Tears. In fairness to Moon, Sophia confessed in Top Fighter 2 (Toby Russell’s documentary) that she accidentally hit people when she first began her career as an on-screen martial arts performer.