In 1988, Anthrax were denied the opportunity to play at Donington for the second time (the first time was in 1987). Because Anthrax encourage mosh pits (they wrote a song titled Caught in a Mosh), it was assumed that someone would die during their set. The irony was that two fans died when Guns ‘n’ Roses performed. GNR would cause another problem for Anthrax in 1991, but I’ll get to that later. Meanwhile, 1988 was the last banner year for The Marquee Club in London. Anthrax didn’t know this as they were trying to book a gig. They were rejected because of what happened in Donington. 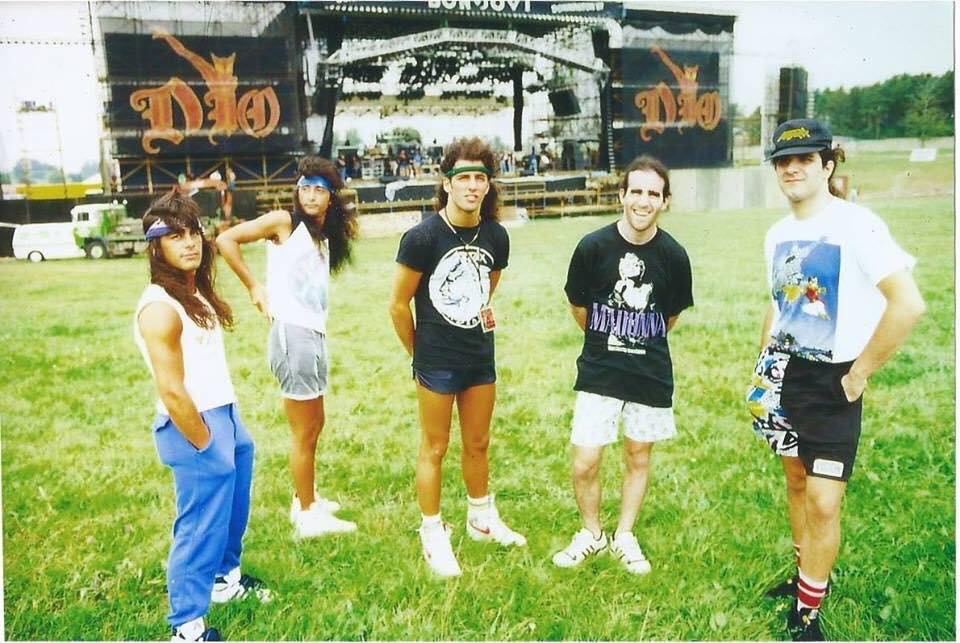 Anthrax’s 4th album could’ve benefited from Tom Allom as the producer. Initially, they wanted him before they realized they could hire his engineer. It’s common for bands to focus on the more technical side as opposed to the side which is conceptual. The problem is that Anthrax needed someone who could scrutinize them. I don’t have a problem with the album but most fans do. Unlike Ratt’s attempt at wanting to work with him (for their first album), Anthrax were in a very lucky position because he had finished working with Judas Priest on Ram It Down (which was a month before Anthrax began their album).

Scott criticized, from a hindsight perspective, that State of Euphoria suffered from too many riffs which could’ve been used in separate songs. The riff-cramming was more likely to do with not wanting to be seen as repetitive, especially due to the progressive nature of Metallica’s 4th album (which had been released one month before the release of Anthrax’s 4th album). James Hetfield criticized his own album by saying that there were enough riffs on Metallica’s masterpiece to form twelve other songs. Another problem for Anthrax is that 1988 was when the musicians of Anthrax were thinking about replacing Joey with John Bush. 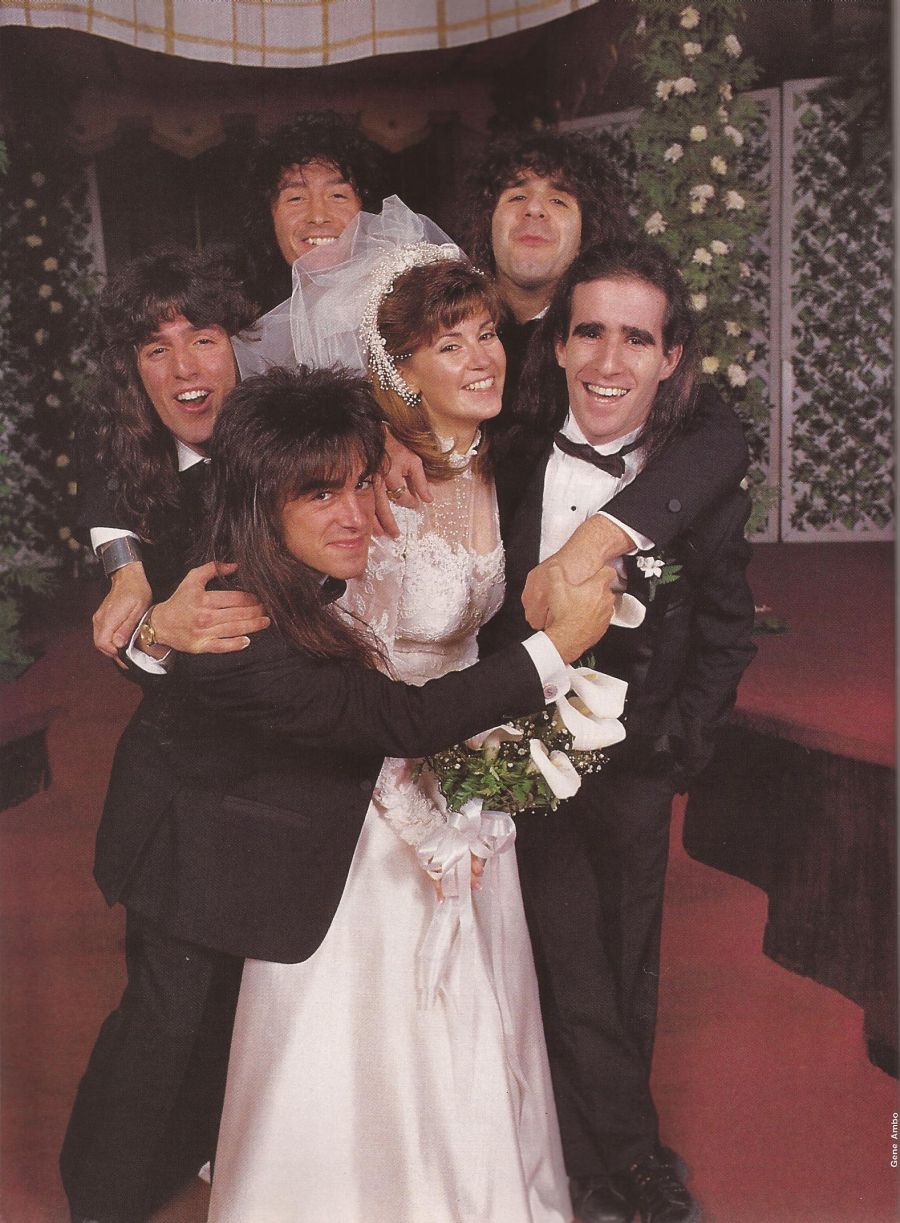 On the music video front, Anthrax were disappointed that the video for Who Cares Wins received little screening outside of Headbangers Ball. The reason was that the video was deemed as too depressing for mass-market consumption. In case that the standards of success couldn’t be any lower, Anthrax experienced double standards when Phil Collins had more success with his song about the homeless (Another Day in Paradise). Even before his song was released, Anthrax laughed at the irony of a band and a hit single called Living in a Box. The only consolation was seeing Metallica lose to Jethro Tull for the best hard rock/heavy metal Grammy. Charlie and Frank, in particular, were the ones who were resentful about Metallica being more profitable. This became more apparent in magazines by the time that it was 1990.

The cover artwork for State of Euphoria could’ve been better. The only positive from the release’s cover is that the circling heads made for spellbinding stage imagery. A better cover would’ve been the centerfold in the January 1989 issue of Rip. The ornately psychedelic poster (which is a montage of photos) depicts a living room which either has no ceiling or has a ceiling which looks like the sky. The rug either looks like a seaside or a lower entrance to one. Anthrax are positioned upside-down on the sky, which (intended or not) symbolizes their downward spiral even if it’s meant to symbolize their down-to-earth nature. The living room has a plethora of miscellaneous items (mostly on the walls). There are too many items to mention. 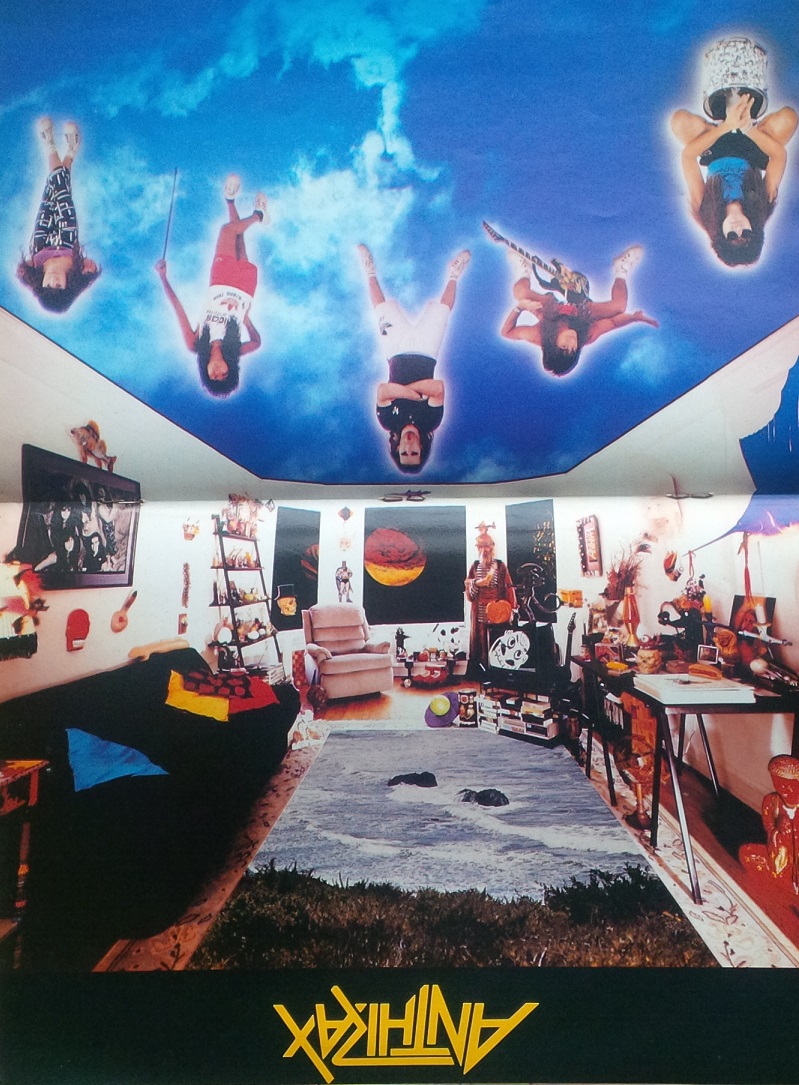 As you can see above, there is so much stuff to take in that the top page should have been displayed at the back of the record; especially since you can already see a photo of Anthrax on the bottom page. What I will mention is that the band’s mascot can be seen on a TV set in the distant right corner. On top of the TV is a miniature of H.R. Giger’s xenomorph. Most notably, there is a miniature cut-out poster of Batman which is in between two of the windows. This is a reference to the fact that a part of the intro to Make Me Laugh is reminiscent of the TV theme. Scott claimed that the part had the same chromatic structure of the Batman riff. To summarize the centerfold, I will say the smorgasbord of colours (from the abundance of pop culture artefacts) is a far cry from the bland nature of most metal artwork (especially contemporary covers).

If things weren’t already bad enough, the last few weeks of Ozzy Osbourne’s tour saw the quirky quintet being replaced by Winger for two reasons i.e. the surface reason and the secret reason. The surface reason was that Winger were way more relevant. Artistically, Ozzy was increasingly veering away from heavy metal to pop metal. Commercially, Winger’s self-titled début LP was more profitable than State of Euphoria. The secret reason was that Anthrax were more lucrative than Ozzy. The promoters didn’t think that he should be upstaged by them like he had been by Metallica in 1986. This was confirmed by Joey (whose knowledge is impressive considering that he wasn’t as business-minded as Charlie). Johnny Zazula (the manager and producer of Anthrax) didn’t exactly see eye-to-eye with Sharon Osbourne on some issues including merchandise. 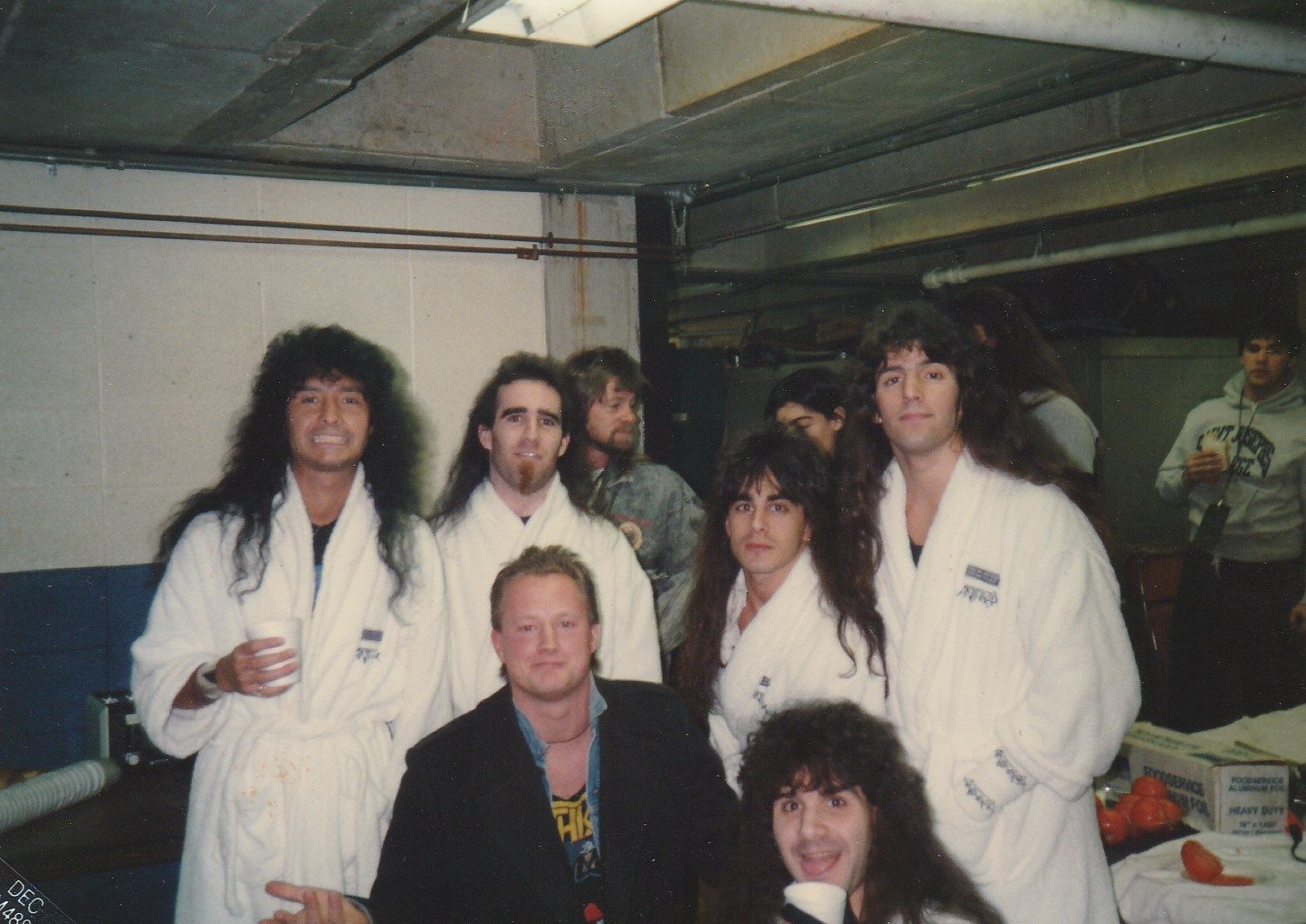 This is what Joey had to say about the Ozzy tour:

“The Ozzy tour was good for a while, but (near the end) we started to feel like we weren’t wanted anymore. I guess we were doing too much merchandise and making too much money for an opening act. The Osbourne camp wanted someone cheaper. It was a business thing instead of a personal thing. Personally, I think Ozzy is a cool guy. I like him. Zakk Wylde and I jammed together almost every night. He picked, whereas I sang. It was fun.”

On December 3, a fan died before Anthrax and Ozzy were to perform at the New Haven Veterans Memorial Coliseum in Connecticut. The 17-year-old male (Steven Frank Piech), who arrived early, was on the top level of the parking garage which was above the coliseum. He slipped and held on for a moment before slipping to his death. The distance from where he fell to where he landed was 130 feet. The only consolation for the band was that, earlier in 1988, they got to open for Kiss (who inspired Scott to be a guitarist). 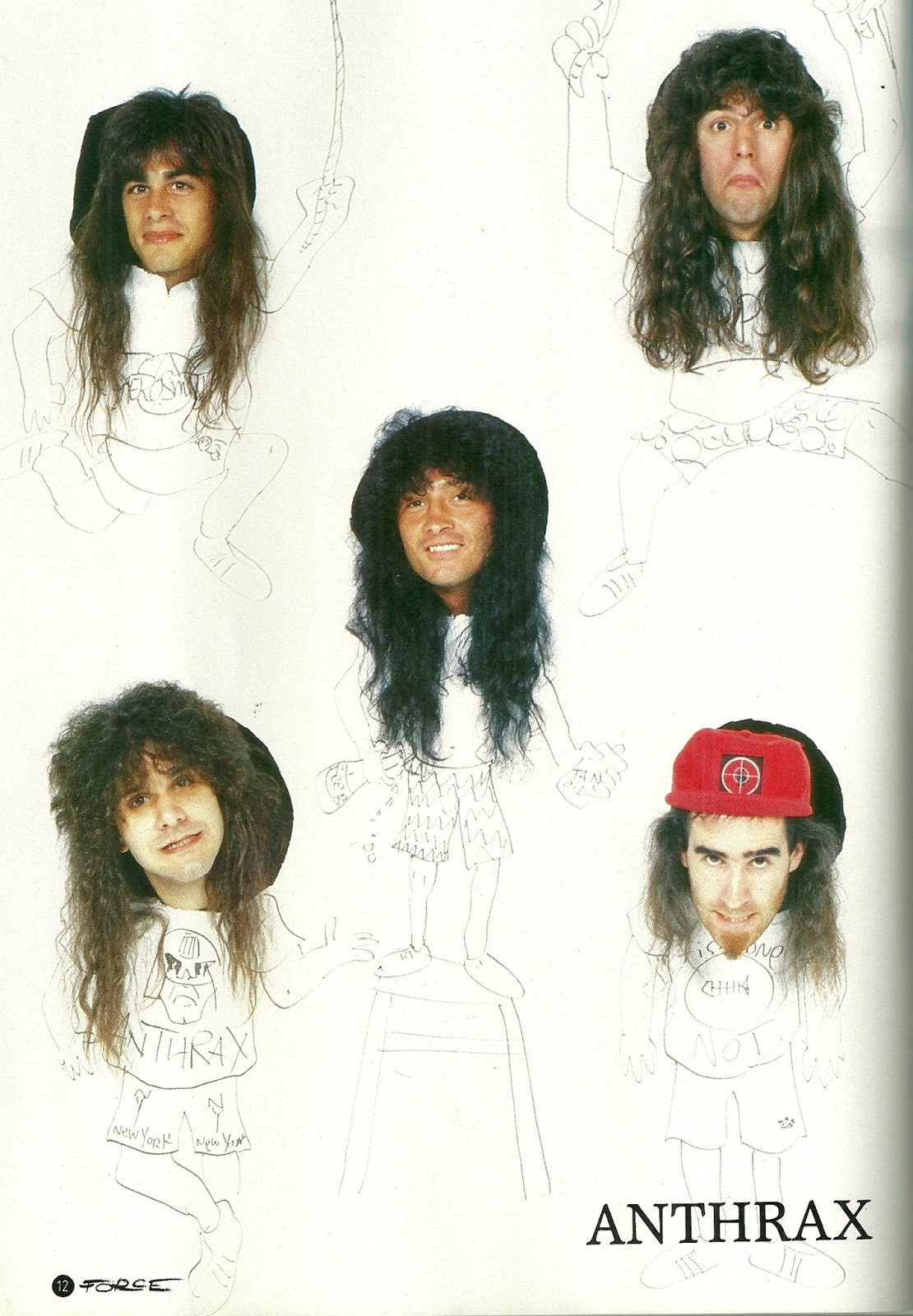 According to a male fan who attended the Civic Auditorium in San Francisco, most of the crowd seemed to be there to see Anthrax. The floor went nuts while they played but, after their set, the floor cleared and the remaining Kiss fans were able to get up close to their heroes. The reverberation of Sharon’s alienation continued as Anthrax tried to open for Ozzy’s summer 1996 tour before Ozzy’s team opted to go out with The Misfits. This is akin to Mr. Bungle’s career being destroyed by Anthony Kiedis (the Red Hot Chili Peppers frontman). The only consolation for Scott is that Stephen King prefers Anthrax to Ozzy. Joey claimed that Anthrax consulted with Stephen a lot about basing songs on his stories.

A missed opportunity is one thing but it’s another if the opportunity is never given. Anthrax felt that, because of a song titled Indians, they should’ve performed at the 1988 Human Rights Now! tour (which was cleverly organized by Amnesty International). Unfortunately, corporate America was becoming confrontational towards heavy metal due to the negative publicity that came from the trials involving Ozzy and Judas Priest along with the assorted backlash (e.g. Twisted Sister) which were associated with the P.M.R.C. 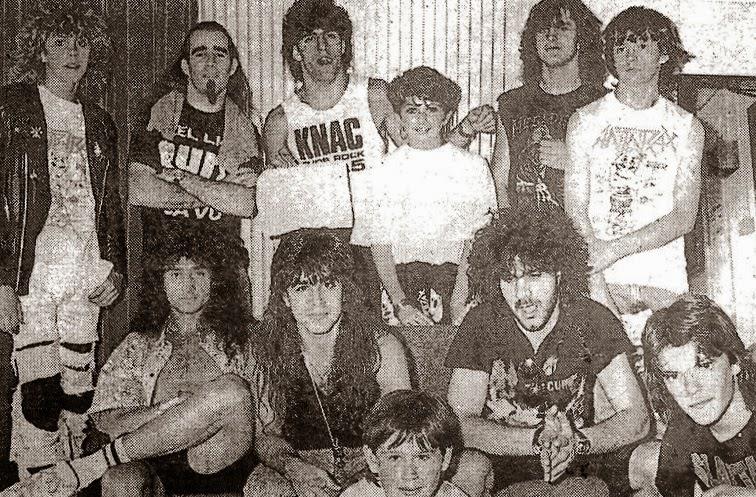 Anthrax could’ve been more popular if they recorded the theme song for the Teenage Mutant Ninja Turtles movie, which was made in 1989 (it just so happens that Dan went as far as having a guitar with the characters painted on them). That year was also when it became obvious that Joey was the odd-man-out in Anthrax. In the August issue of Rip, he said something which made people question his place in the band…

“I’m probably the loner. The guys all have their own people who they like to hang out with. I live in upstate New York. The rest of the band is in or around the city. Even if I lived near them, I probably wouldn’t hang out with them that much. Danny and Scott have got wives. Charlie and Frankie have girlfriends. I’m the bachelor. These guys have a lotta fun and raise Hell like no-one else. For one thing, I do not stage-dive because I’m afraid that I may not come out in one piece. I do my own thing on stage. Let the kids do that stuff in the crowd. It’s too risky for me. Most of the sick stuff that my bandmates do is not what I’m into – like pirate raids on hotel rooms and interfering with people’s clothes and things, but I do enjoy the fact that Anthrax don’t do drugs and party like other bands do. We’re more accomplished without those distractions. Now don’t get the wrong idea – I can rage and have fun too. Hell, I gotta have fun, or I’m outta this business because, otherwise, what’s the point?” 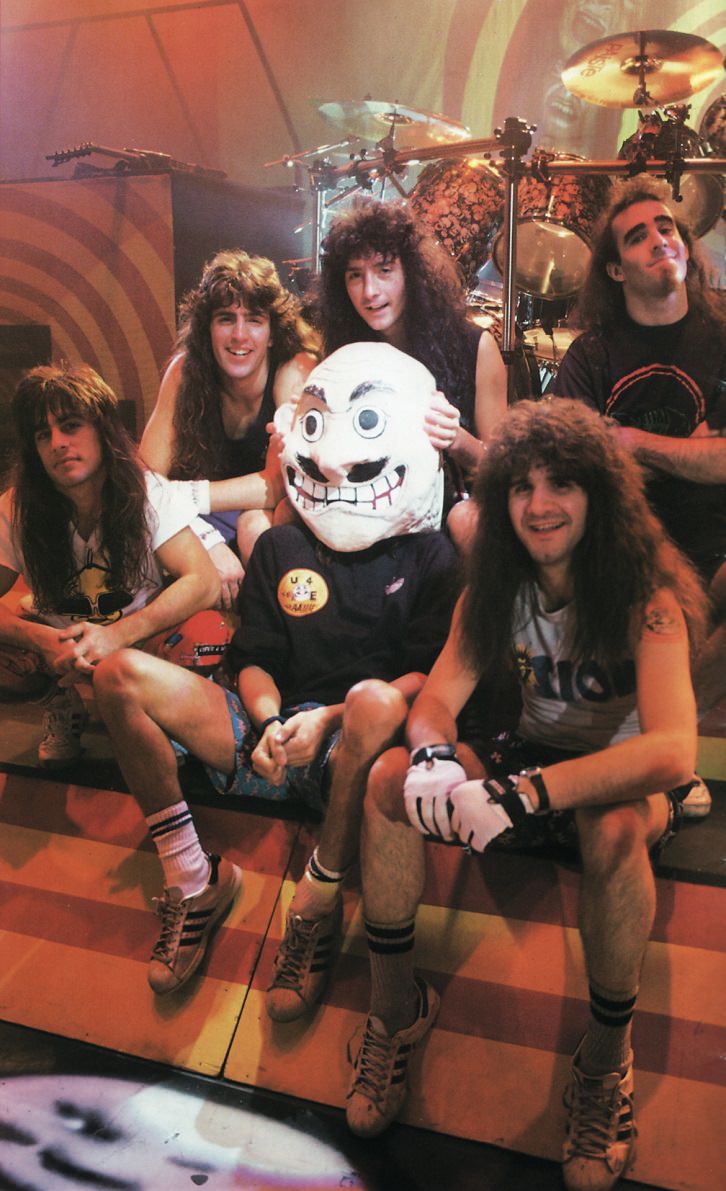 Charlie was very happy when he got his photo taken with Sinéad O’Connor during a party that took place in an English pub which was rented specifically for Anthrax. It was after they finished touring with Living Colour in England. If this photograph became widely circulated in mainstream media, Anthrax would’ve received more exposure. It, after all, was the biggest party that Anthrax had attended (according to Charlie). Back to the August `89 issue of Rip, Scott alluded to an irony about Living Colour: “What we’re doing is giving them exposure to a metal audience that they haven’t had in the States. Living Colour broke in the U.S. mainly on the power of their MTV video…MTV isn’t metal.”

Anthrax’s manager, Jonny Zazula, confirmed what Slash said in his 2007 memoir about the white world of eighties metal: “I hate to say this, but there is still quite a lot of racism among the American heavy metal biz ranks. I think the reason why King’s X didn’t go through the roof with their début LP was the fact that they have a black frontman. The industry is still blue collar, but maybe it’s getting better.” 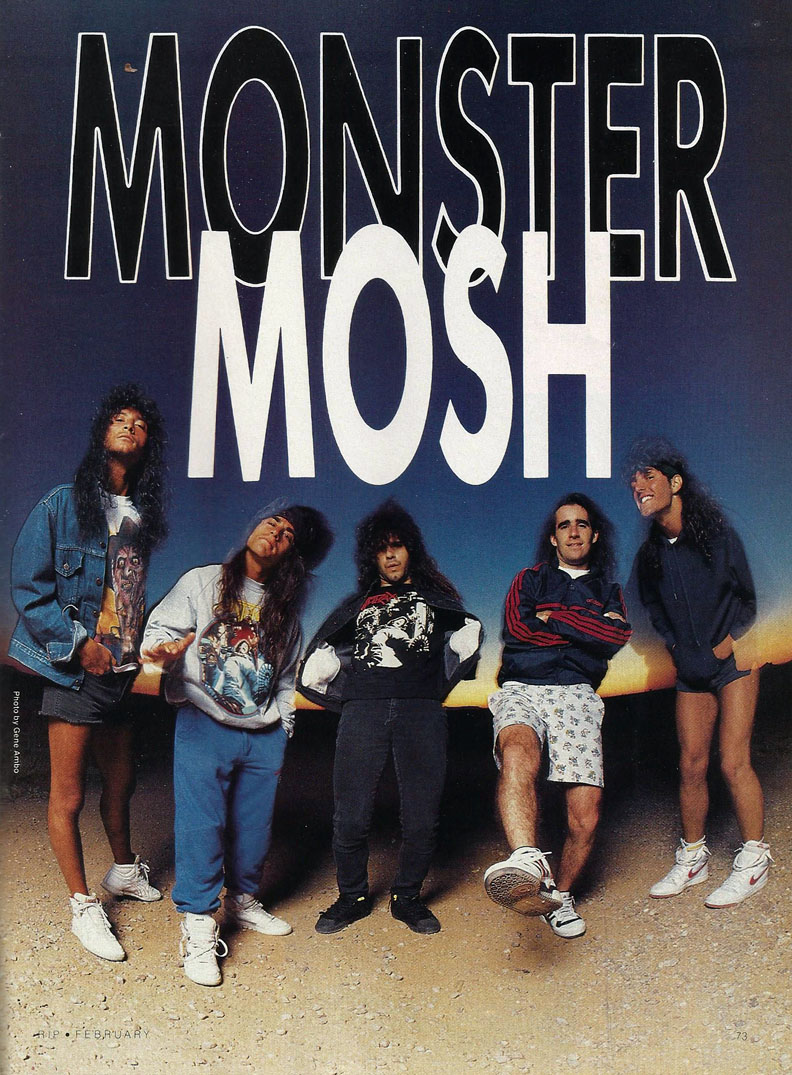 Joey explains why the U.K. metal fans love metal more than the U.S. ones: “They’re more hungry because they have less to do with themselves here, so the music gets a higher priority. They’re definitely more messed-up at the gigs. Some of these kids don’t eat all day then they spend all their money on beer before raging and puking at the concert. English TV networks suck, so the live experience is everything for these fans. A brew of beer, barf and bands is the U.K. way!”

The audience in Manchester was a bit hostile when Living Colour performed. Some of the punters were throwing things at them. To be fair, the sound mix was quite poor. The Newcastle audience were friendlier. The irony is that Newcastle is a lot more blue collar than Manchester, Liverpool or Birmingham. Racism is primarily a working-class problem, and heavy metal’s audience is primarily working-class, so you can see why there is more intolerance in the U.K.