The woman in the featured image is Jennifer Jason Leigh. She lost out to other leading ladies for the following mainstream movies – Taxi Driver, Superman, American Gigolo, An Officer and a Gentleman, Flashdance, Superman III, The Terminator, Desperately Seeking Woman, Back to the Future, Hannah and Her Sisters, The Fly, Fatal Attraction, The Accused, Batman Returns, Death Becomes Her, Hannibal, A Beautiful Mind, Unfaithful and Chicago. In case that wasn’t enough, she went on to lose the role that Susan Sarandon played in Enchanted. Jennifer didn’t win the second-string female role that Melanie Griffith won in Working Girl. Ditto for what became Drew Barrymore’s character in Charlie’s Angels. Jennifer had the misfortune of her father making her lose to Brooke Shields for The Blue Lagoon. 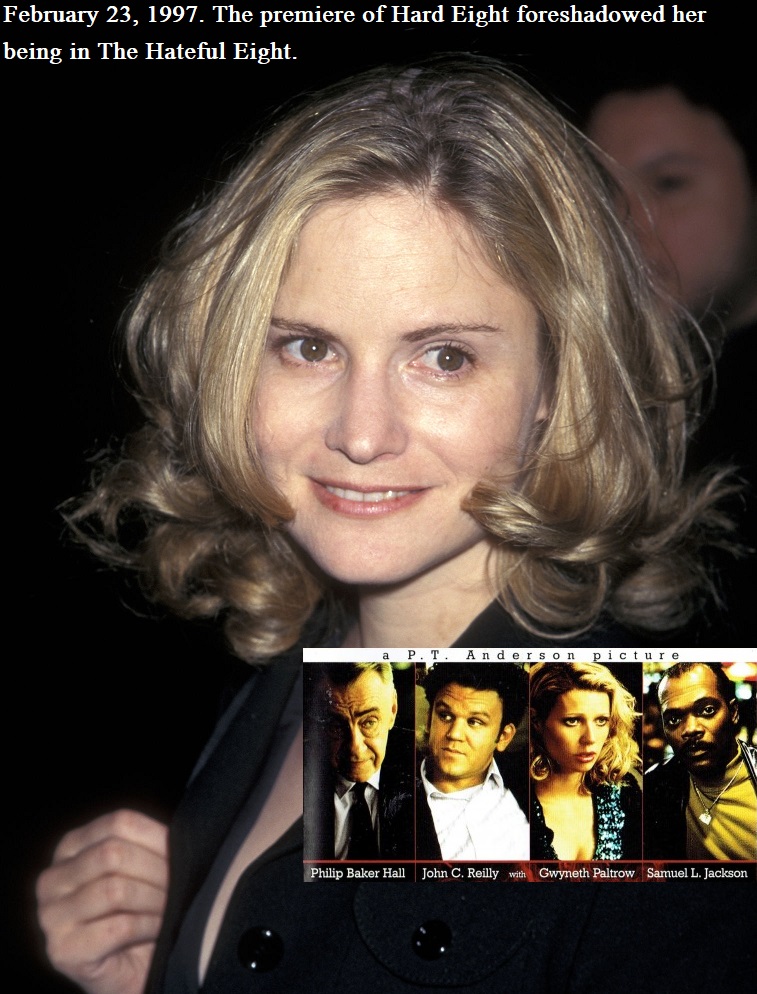 Jennifer rejected the career-making chance to be Molly in Ghost (which revamped Demi Moore’s floundering career), and Kim Basinger’s career-saving role in L.A. Confidential. What was obviously the Oscar-parlaying lead in The Piano would have been her gain had she not been too busy. She rejected the chance to be in Sex, Lies and Videotape (thereby kickstarting Laura San Giacomo’s career to the extent that she has more net-worth). As it turns out, Jennifer regretted the latter rejection. As for the title of this article, it is a play on words relating to two phrases – lift the lid and an eye-opening experience.

Eyes Wide Shut has a Chinese title which means Eye-Opener. It would have been more satisfactory for all concerned if I could find a still of her as Marion Ziegler, but there are none to be found because Stanley Kubrick wanted the erotic film to have an air of secrecy. Filming was so secretive that Nicole Kidman likened the number of crew members to that of a film school short. J.J. began working on the film in 1996, but her services were dismissed in 1998. She had completed the role, but the press release claimed that the part had to go to someone else because she was already contracted to another film.

“There seems to be little justification for the highly publicized replacement of Jennifer Jason Leigh. Marie Richardson takes over for what is little more than a cameo appearance.” 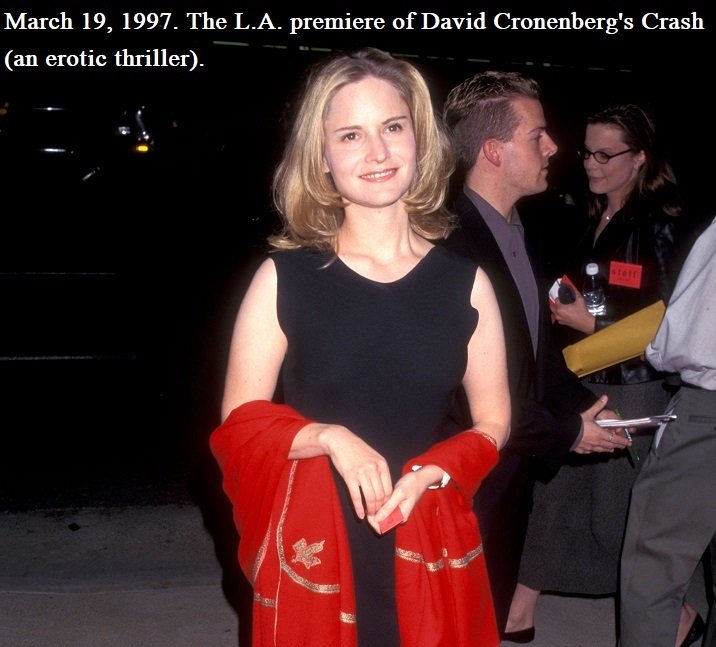 The one thing that kept her in good stead for the role was the same thing that might have harmed the production’s prospect of prestige – Jennifer had a reputation for getting naked on camera, sex or no sex. With this in mind, it shouldn’t be a surprise to find out that she had auditioned for the role of Vivian in Pretty Woman when the film originally had a darker screenplay. In the February 1992 issue of Playboy, Jennifer recalled how relieved that she was for not winning the role because she thought that the film was to prostitution what Top Gun was to navy recruitment.

The news of Jennifer joining the cast was announced in a Warner Brothers press release on October 24, 1996. Three days earlier, she was quoted in the London Times as saying that the part of Marion previously belonged to Robin Wright (as far back as July). The last press release to have mentioned Jennifer (24/4/98) gave away the real motive by proclaiming Marie as a leading lady of Ingmar Bergman. She was mostly in his plays and a Swedish TV film titled In the Presence of a Clown, which was going to be shown at the Cannes Film Festival in May. Stanley wanted his potentially embarrassing film (an artificial erotic drama) to be an Oscar qualifier.

The substitution is not as sympathetic as what had happened during the making of Saratoga (1937). Jean Harlow died when the film was nearly done. The remaining scenes were shot with Mary Dees (who had already worked as her double in two prior films) while her voice was supplied by Paula Winslowe. MGM had planned on scrapping the film before starting all over again with another actress (it was down to Virginia Bruce and Jean Arthur). However, Harlow’s fans demanded that her last film be released and the preview audiences were receptive. The studio had acquiesced. J.J. Leigh had it easier than Barbara Loden who was not paid for her emoting in The Swimmer (a 1966 movie which was shelved before being released in 1968). 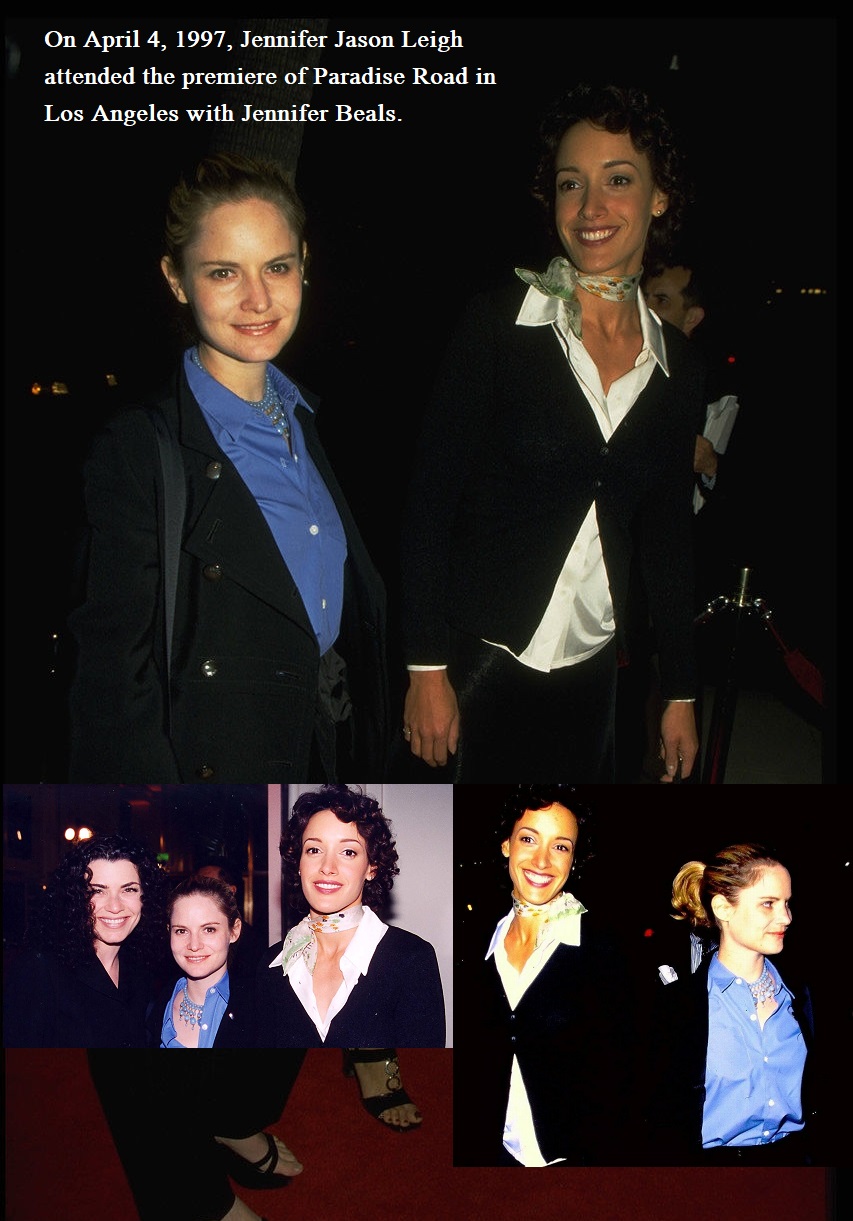 Barbara was fired because Burt Lancaster didn’t like the fact that she stole the limelight. What made it worse for her is that her husband at the time, Elia Kazan (a director who didn’t work on the film), conspired with Sam Spiegel (one of the producers) to have her sequence removed – going behind the backs of the Perry spouses (a directing and writing duo who both thought Kazan was acting as an advocate on behalf of them). The irony is twofold in that her replacement was twice screwed over by Sam Spiegel after he promised to impart a vintage painting as payment and second billing (which actually went to Janet Landgard). The second part of that twofold irony is that Burt was let down by Sam, who promised that he would supervise the production.

On January 31, 1997, Jennifer was a guest at a San Jose film festival called Cinequest so that she could speak after a viewing of Uli Edel’s Last Exit to Brooklyn (an `80s novel adaptation which Kubrick wanted to direct before the `80s). The number of people in the auditorium was approximately 400. After the viewing, she was introduced by Heidi Roizen (of Apple) and did a little Q & A session. A man named Stefan Youngs asked:

“Could you tell us about working with Stanley Kubrick?”

She beamed as she answered:

“It was the most incredible experience of my life. He’s an amazing man. He’s funny, compassionate and he’s a genius. As you probably know, we’re sworn to secrecy by Stanley, so I can’t discuss anything specific about the film. It was just a great experience. I’m going back there after this.” 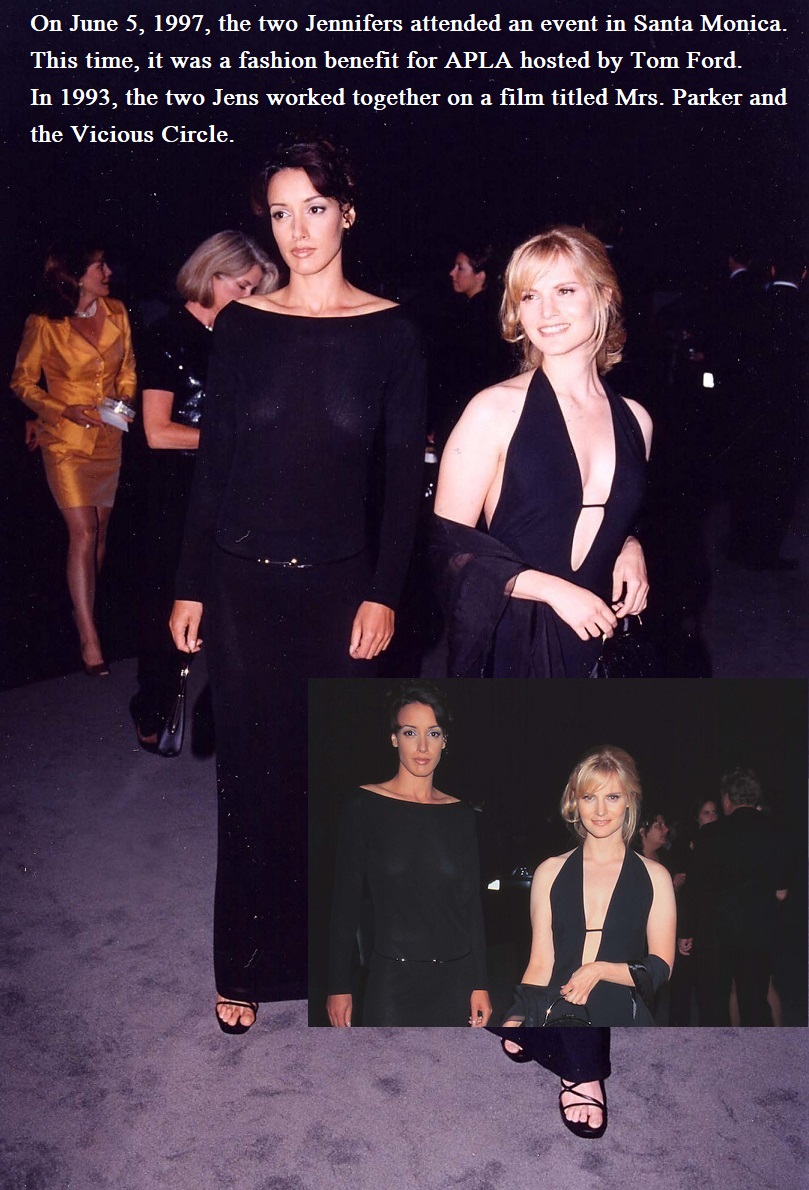 When being interviewed for the October 5 issue of the San Francisco Chronicle (in 1997), Jennifer claimed that Kubrick had cast her because of Georgia (she regarded this as being worth more than an Oscar nomination). Her agent asked Leigh’s permission about giving her phone number to him. She permitted it. Leigh went on to say:

“It’s very, very clandestine. For example, when I read the script, I had to go to the supermarket to pick it up, and then return it later in the day. It was really fun, like I was working for the C.I.A. The woman who was dropping it off had to describe what she looked like. You know you’re doing something right when Stanley Kubrick offers you a job. I walked on air for 2 months just from talking to him on the phone. He turned out to be lovely to work with, so gentle and thorough. I was sorry I didn’t have a bigger part. I wish I was still working on the film.”

Jennifer was busy in the last three months of 1997. There were two TV movies that she was involved with – The Love Letter (whose filming schedule lasted from October 22 to November 20) and Thanks of a Grateful Nation (whose filming schedule lasted from October 26 to December 18). On 14/4/98, it was mentioned in the N.Y. Post that a spokesperson for Jennifer (a 60-year-old manager by the name of Elaine Rich) denied the report that she had been summoned back to the set to start all over again because Stanley was displeased. By that point, she was starring in David Cronenberg’s eXistenZ (one of those flops which becomes a cult hit). Appearing in Kubrick’s film necessitated extra publicity for what could have been an easily ignored Sci-Fi thriller (it surprisingly didn’t go straight-to-video or remain just in art houses).

In the February `99 issue of Paper, she had this to say about the overall Eyes Wide Shut experience: “It was a great experience, but meanwhile, I’m not in the movie, which is sad and a drag.” 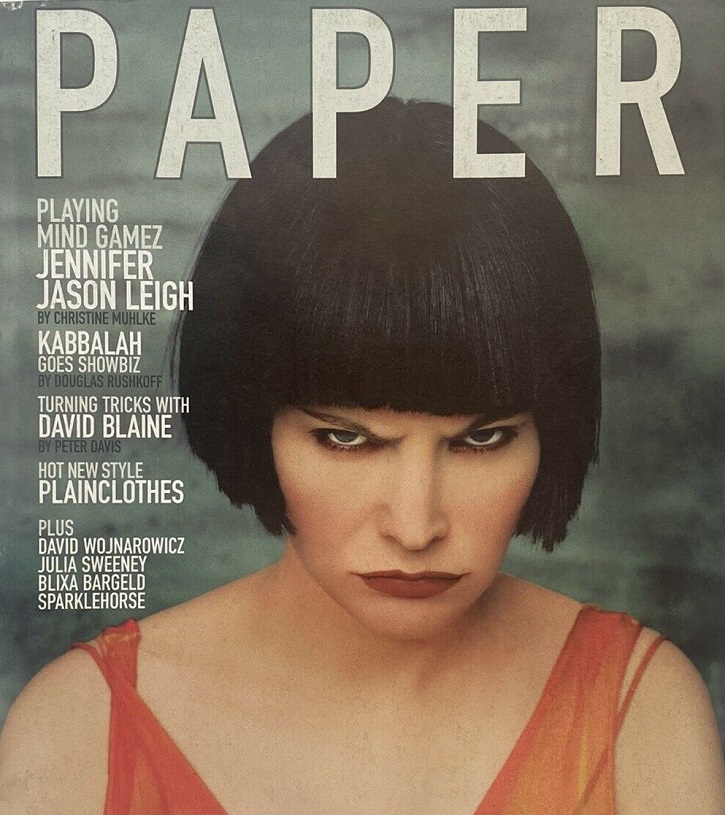 “It’s very exciting to work with people who inspire you. I’m really lucky that way. I was so sad and so shocked when I heard that he died because he seemed so young and so healthy. He was a real mensch….lovely, funny, sweet, gentle; all the things you’d never feel about Kubrick. I loved working with him. Sometimes he was really open, to the point that we were improvising, and other times he would actually give line readings. It was a small crew, maybe only 10 people. We didn’t do that many takes, the most was about five. I have the experience of working with him, and that’s what I prize more than being in the actual movie.”

In the spring of 2001, when being asked about Eyes Wide Shut, she said that she had only been there for 10 days. It begs the question that a single and simple scene would’ve been analyzed at the end of each day. Interestingly, she had this to say:

“It is like going through the looking glass when you work with him because you enter a world without time. Time just fades; it has no meaning. He’s incredibly gentle, open and specific. He knows what he wants.”

It’s been suggested by a film fan that the entire film – the casting, marketing, posters, media anticipation and eventual story – was structured to create the effect of a failed sexual act (i.e. much like Cruise’s character’s failed sexual adventuring). It was intended to show the disorienting, distracting and fruitless rewards of pursuing lust over love. With that said, it’s still disrespectful to Jennifer because the film had been in production for so long that it broke a record.

A blind item (dated 7/7/98) insinuated that she had a drug habit that was affecting her performance and behaviour. Even blind items can be manufactured by studios as a way of raising interest in their movies. Naturally, one should always turn a blind eye to such items.