Like my Hong Kong cinema articles in October, the info is a mesh (or should that be mess?) of news stories from the two Dailys with similar names – Ming Pao Daily and Sing Tao Daily. By the way, the teddy bears on the cover remind me of two things – gay slang and Jordan Chan appearing in Andrew Lau’s adaptations of the Teddy Boy comic books. Anyway, here are the news stories…starting with this December 11, 1996 item – location: a funeral home in Kowloon. A scene was being shot on this day – Francis Ng’s character has come to pay his last respects to boyfriend Fredric Mao Chun-Fai, but Francis receives cold looks from Mao’s family because they didn’t want to accept the fact that he was a homosexual. 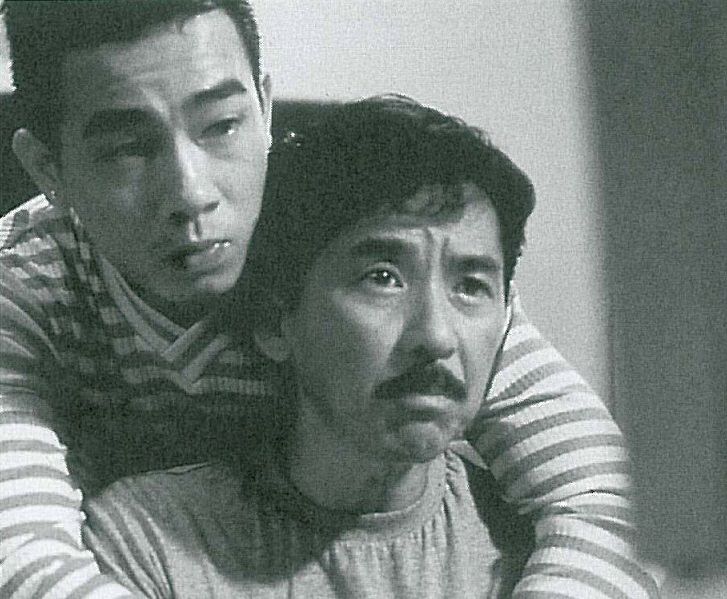 The director, Kenneth Ip Kin-Hang, felt obliged to say: “Movies with homosexuality as a topic will definitely be dramatic. In the past, movies didn’t dare to touch it because the average person rejects the topic. Now that the times have changed, the resistance is less, so creators no matter mind using their heads on this direction. Nowadays, movies lack subjects, many times a risk must be taken. The alternative subject may be a surprise hit, so might as well give it a try. Foreigners watching a homosexual Eastern film may feel it is more interesting.”

He addressed the impending political situation with H.K. being handed over back to the Mainland: “1997 believably may be a problem. The directors who wants to make this subject all hope to finish this dream before then because, after `97, no one knows whether topics like these would be passed. This topic was given to me by Media Asia’s Philip Chan Chi-Leung. It isn’t my idea, but I felt it could be made, so I began from there. I also have quite a few difficulties. Attitude and standpoint all must be done carefully, as I don’t want to mock. Comedy doesn’t mean there must be a clown. I must think normally and not twisted to handle this touchy subject. Average people still isn’t completely accepting toward this. Some looks extremely open on the surface, but inside may not be the same. Nonetheless, a truely open society should keep an eye on each other. The recent wave of homosexual topic films doesn’t represent an encouragement. Discussion can also face the problem. If it isn’t discussed publicly, more prejudice will appear.”

George Lam (Mustachio) talked about acting like a gay man opposite Jordan Chan in A Queer Story (1997): “It isn’t that hard, only the object of love is a man. When acting, I pretend he is a woman, it is all acting.”

When asking Jordan if his hair stand on its ends when himself and George kissed, no one expected George would be beside him laughingly saying: “Hair standing on ends? It isn’t that horrible!”

In Who’s the Woman, Who’s the Man (1996), Jordan played a character who fell for a lesbian played by Theresa Lee Yee-Hung – who he had a love scene with. How do the two scenes compare? Jordan faced with this question suddenly seemed a little reticent. After some pausing, he reluctantly says: “The two scenes weren’t that exciting, especially the one with George. It was shot with positions and angles.”

If it wasn’t for Anita Lee Yuen-Wah being his girlfriend (no nuptial) , many people would have believed that Francis Ng is gay. When asked if he has been flirted with by gay men or if he has ever fallen for a man, he turned his head toward George and said: “Making this movie, I find George very attractive. Why? His speech, manner, taste and knowledge are all great.”

When George was asked by the reporter about his reaction to Francis singing his praises, he said: “I don’t feel I have any attractiveness!”

On December 4 of 1996, it was revaled that the movie was arranged to be shown on December 31 at 19:30 and 21:30 in one of the Golden Harvest theaters. Despite the fact that the public release date was going to be January 16, early screenings were held so that the movie could be qualified for the H.K. Film Awards in April. The director who’s also known as Shu Kei was confident that Jordan and George would win. Clifton To, the producer who is more successful as a director than Shu Kei, revealed an interesting tidbit about the post-production. George brought his wife, Sally Yeh (mostly known in the West for her role in John Woo’s The Killer), to see the first print. It wasn’t so much to do with marital privilege as it was to do with the fact that he was worried about not getting her approval.

She was described as very resistant toward homosexuals, but the writer may as well have not pussyfooted…..just say it – she is a homophobe (imagine how she would react if The Killer had been an actual gay action film instead of the homosexual subtext that critics have read into it). After she saw the film, she was moved to tears and greatly praised her husband’s performance. George claimed that he has many gay friends, especially when he lived in San Francisco. He believes that time is moving too fast for homosexuality to be a big deal, as there was a gay couple in Taiwan who were then getting married and holding a wedding banquet. When asked if any homosexuals have hit on him recently or ever, he said: “Everyone knows I like women!”

Surprisingly, the director didn’t get fired when he told Jordan not to inform George about the kiss so that it would be a surprise. However, Jordan didn’t go through with it because he was afraid that George would slap him. The shoot still went successfully. Jordan said that he had never kissed a man before. He joked while still finding time to compliment: “Kissing George feels like entering a forest because of his mustache. Plus he doesn’t smoke or drink, so it felt pretty sweet.”

George acted in A Queer Story back-to-back with Up for the Rising Sun. He explained it was mainly due to finding the appropriate scripts and not for money. If he were to place money first, he would have accepted 10 movies in a year. However, he would later find himself getting arrested for shoplifting in 1999. He presumably forgot to pay for them because he was browsing other items for quite some time and realized that he had an appointment which he had to attend.