In late July, I watched a documentary about Robin Williams (Come Inside My Mind). The story behind the conception of Mork & Mindy in 1978 was that one of the Happy Days producers had a son who felt that the sitcom lacked a space man character. Inane! The father didn’t want to let his son down, so he agreed. Far from it. In actuality, the success of Star Wars meant that many people sought to ride the meteoric rise in popularity. All you have to do is look at what followed in the remaining years of the seventies – Blake’s 7, Battlestar Galactica, Starcrash, Moonraker, Alien, Star Trek: The Motion Picture, The Black Hole and that’s not including stuff that was green-lit in the seventies but released in 1980 (Battle Beyond the Stars before Flash Gordon). However, what I want to concentrate on is not much the genesis but the terminus (the genesis part was just an intro). The way that the documentary deals with the end of Mork & Mindy happens to tie in with John Belushi’s death. As a sidenote, I like to think that if Belushi didn’t die then Henry Winkler (who played The Fonz) might have cast him to play Jack Dalton (who had 19 episodes) in the original MacGyver. 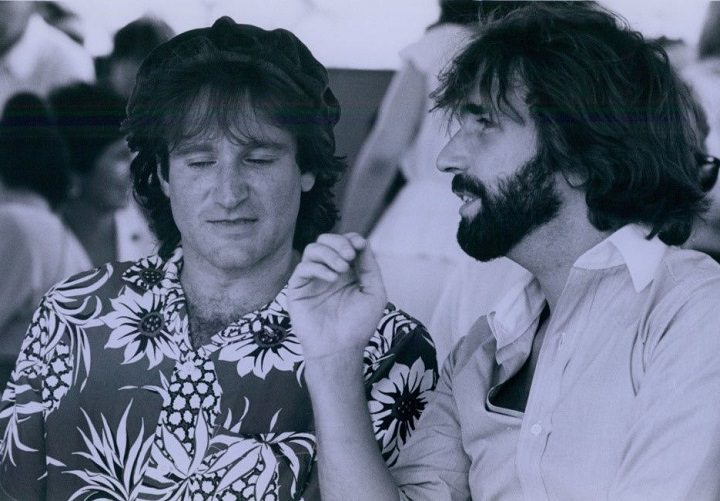 Back to Belushi’s death, he was getting high with a female snitch at a bungalow which belonged to an L.A. hotel called Chateau Marmont. The L.A.P.D. allowed Cathy Smith to bring drugs from their evidence locker so that they could set up a sting. Her early release, plus the total lack of investigation into the source of the drugs, back up this story. She told her police connection that Robert De Niro and Robin might be coming by. She was told to keep getting John high till Williams and De Niro showed up so that the bust could be higher profile. The men showed up briefly at different times, heading out in disgust with her presence. She kept getting John high till he overdosed right in front of her. She immediately called her connection – a woman who was sleeping with the officer who supplied the drugs. He got on the phone and told Cathy to just wait for him. He showed up at the Marmont, told her to leave and come back in an hour. He proceeded to prepare the scene in the way that he wanted it to be found, then went down the block and waited for the body to be discovered. For all we know, Belushi got rid of the drugs and was killed in retaliation. 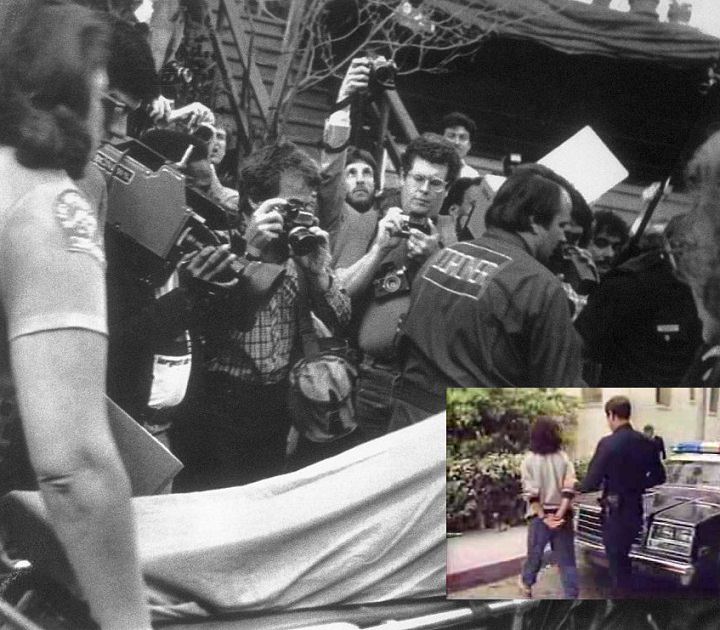 For what we do know, John was speedballing too much. The Quaaludes and alcohol didn’t help matters either. If he had just taken cocaine or just heroin then he might have survived. Maybe I’m old-fashioned; my idea of getting stoned is getting drunk whereas my idea of getting wired is drinking coffee. LSD and hash brownies would’ve suited him more. Anyway, after John took his last shot, he laid down in his bed, turned on his right side, and went to sleep. Cathy Smith then went into the living room of the bungalow and wrote a letter to a friend in Canada. The letter took some time. As she was writing, she heard some strange, wheezing sounds coming from his bedroom. Concerned, she walked into the room and shook him awake to ask if he was okay. He replied that he was fine but his lungs felt congested. She gave John a glass of water, which he drank, and then he went back to sleep. She ordered room service and a few minutes later, the food arrived. She ate the breakfast and checked on John. He appeared fine and was snoring loudly. She decided to not wake him and to take his car to run some errands. She left the bungalow around 10:30 a.m. 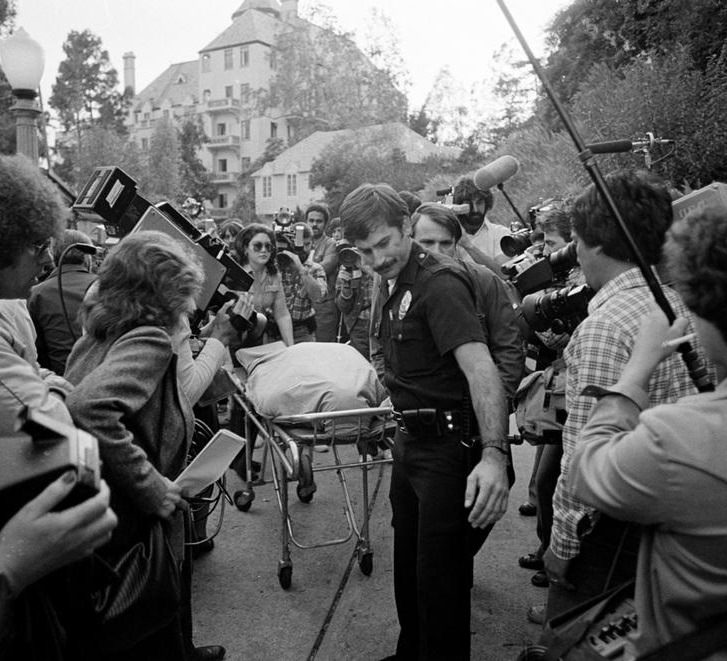 Between 11 a.m. and noon, a security guard alongside a maid observed an empty L.A.P.D. police car outside of the bungalow. Both employees were sure that the police were inside Bungalow 3. In fact, the maid tried to enter from the outside walkway and was denied entry by the cops. Around 12:15, Bill Wallace, a close friend and physical trainer of John, entered the bungalow. He was there on an errand for John to deliver a typewriter that he had requested on the previous day. The room was very hot and eerily quiet. Bill called out for John but there was no answer. Bill walked into the bedroom and saw John lying on his right side. Bill shook him and got no answer. Finally, Bill pulled the body towards him and saw the horror. John’s tongue was hanging out of his mouth, the right side of his body had a ghastly dark section of settled blood. He tried resuscitation. John was not responding. Finally, Wallace called John’s manager – Bernie Brillstein, who had his secretary call 911. Bernie dashed out of the office to go to the emergency room. When the paramedics arrived, they failed to resusitate John. Finally, at 12:45 p.m., John Belushi was declared dead. 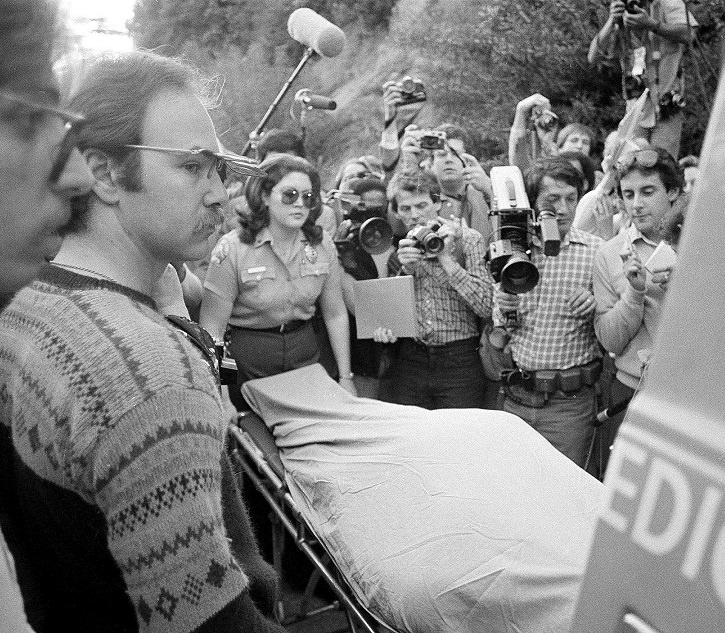 The L.A.P.D. came to the Chateau Marmont soon after the paramedics. Bungalow 3 was sealed off from the public. Bill Wallace was interviewed by the police. He explained what had happened. The police then called the coroners office. By this time, the media got wind of a big story at the Marmont and descended on the scene. Rumours swirled that the body in the hotel room was John Belushi. The cops confirmed that it was. But, no one from the L.A.P.D. let John’s family know that he had died. Cathy was arrested after she fled the scene in John’s rented red Mercedes. The below photo fascinates me because Ron Howard (Richie in Happy Days) wanted to team up John with Henry Winkler for Night Shift. Because of John not wanting to leave New York for the L.A. shoot, his role was given to Michael Keaton. At John’s funeral, the celebrities most notable for their absence were Robert De Niro and Robin Williams. The funeral had only been five days after he died on March 5, 1982. Robin was paranoid because, the night before John’s death, a narc had pretended to be a parking lot attendant so that he could tell Robin that John and Robert wanted to meet him. 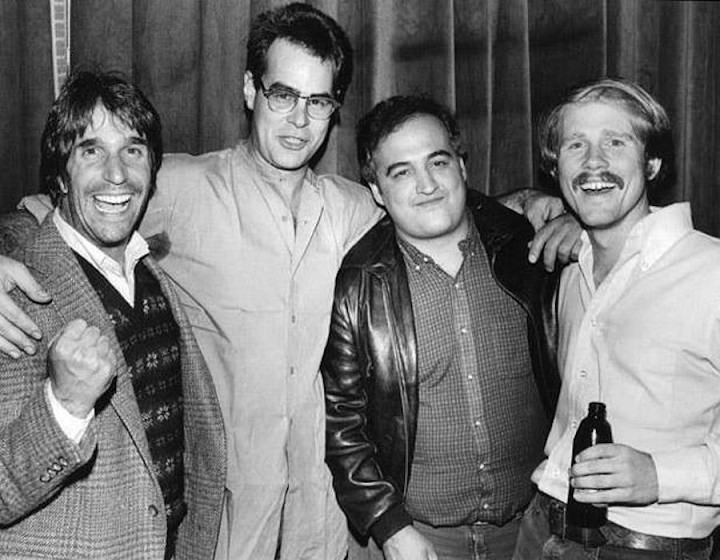 Robin found out that it was a lie, but still snorted some cocaine anyway and left before he could be busted. He denied about partaking in some blowing, but you can’t blame him for looking over his shoulder. A male detective, Addison Arce (who would later work on the O.J. Simpson murder case), wanted to interview Robin and Robert. Williams agreed, but De Niro was supposedly too busy being in Italy for the filming of Once Upon a Time in America. However, filming only began in June of that year. With that said, William was said to be so traumatized that not only did he give up the drug but he decided to move out of L.A. around the same time that Mork & Mindy came to an end (two months after John’s fatal overdose). Robin had more to hide since De Niro only showed up because Robin had invited him. De Niro entered the bungalow from the back. After spending a small amount of time at the party, Robert had retreated to his suite in the Chateau Marmont. Robin mentioned that he never saw John shoot up heroin. 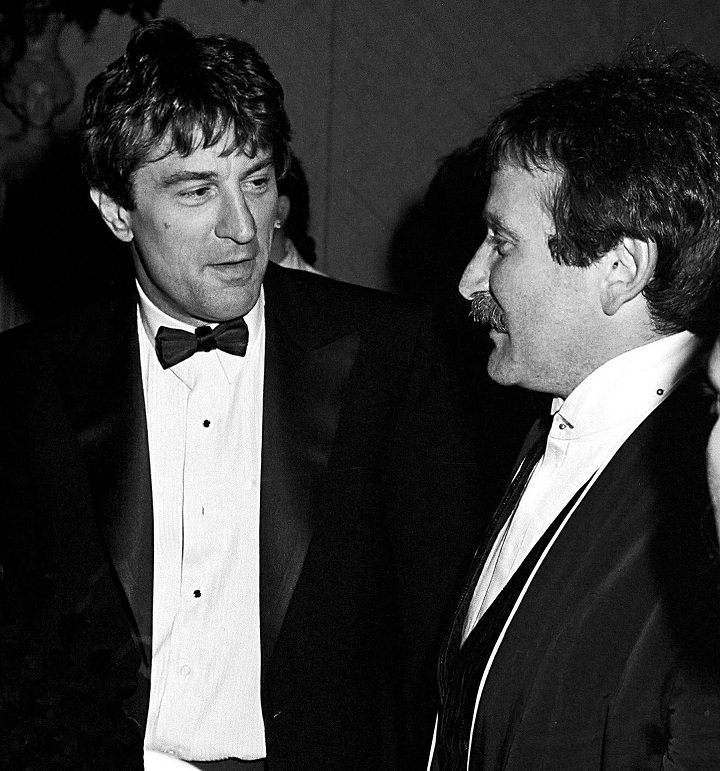 It should be noted that Robin testified before a federal grand jury where Robert only did it via an amplified phone call, but only at the request of the L.A. District’s Attorney Office. Outside of that court hearting, De Niro has had a reputation for refusing to speak about it. Williams was nowhere near as tight-lipped as him. Despite how they differ in attitude, this didn’t stop the two Robs from working with each other on Awakenings in 1989 and 1990. You can bet that they talked about Belushi, even if it was only in private. They would’ve had a lot to talk about seeing as how they had socialized with him on more than one occasion. When researching for this article, I was surprised that there are no photos of Belushi with either of them. Eddie Murphy also socialized with Belushi but, again, no photos. When Judith Belushi (widow) got Bob Woodward to write a book about John, Williams agreed to be interviewed but not De Niro. Robert felt guilty because Belushi wanted to emulate his method acting style. He was taking heroin so that he could relate to a punk rock character that he was going to play. This also explains why he was partying with Derf Scratch – the bassist of an L.A. punk band called Fear.