It’s funny to think that Gary Holt became the Dave Mustaine of Exodus in the sense that there was a time (2005’s Shovel Headed Kill Machine) when he was the only original member in the band. Then again, both guitarists could get away with that since they were the leaders. Of course, that type of compromised line-up only lasted for a small time in Megadeth’s history. What made Mustaine lucky was that the firing of members helped move the band forward. With Exodus, there was always a sense that losing a member wasn’t really about losing dead weight. Steve Souza replacing Paul Baloff as the vocalist was a bad idea because it sometimes made the songs sound too silly. Gary has always had mixed feelings about Steve’s vocals and lyrics. Steve always wanted to be the American equivalent to AC/DC’s Bon Scott. 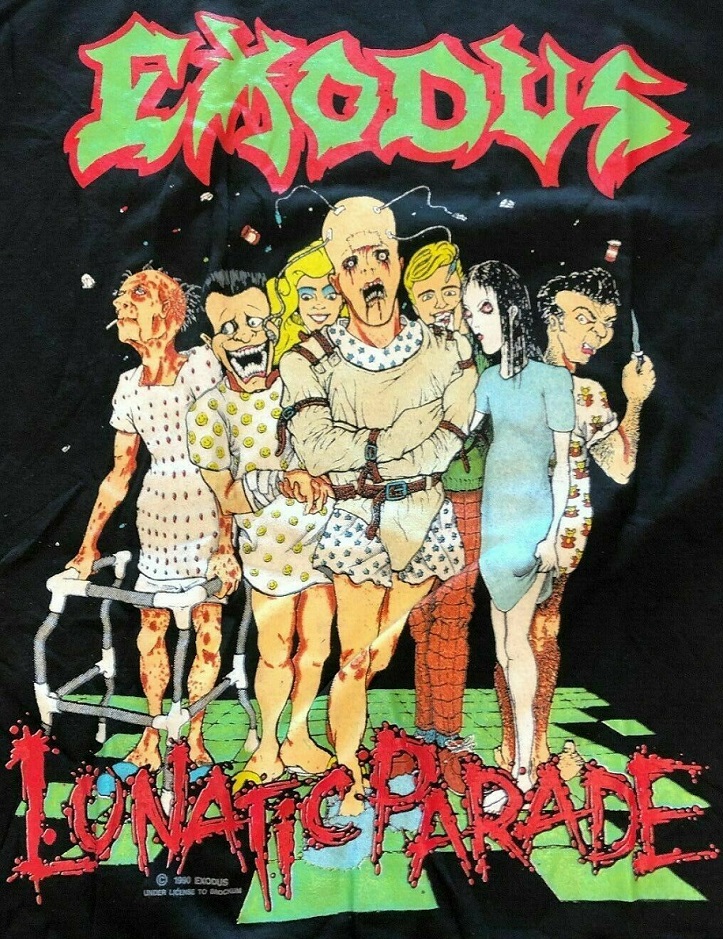 Exodus even did a cover of Overdose, which thankfully was left off the vinyl release of Fabulous Disaster. As off-key as Paul was on the first Exodus album, Bonded by Blood, he improved on the Pleasures of the Flesh demo. He reminds me of Neil Turbin who, unlike Paul, never failed to memorize the lyrics. Looking at the trading cards below, Rob McKillop looks like what if Robert Sean Leonard quit acting to be in a thrash metal band whereas Rick Hunolt looks like what if Def Leppard’s Phil Collen looked deranged. Gary looks like what if Kerry King had slightly softer facial features and no facial hair. When Steve isn’t pulling faces, he used to look like what if Carlos Valdes was older and stockier (if not chubbier). The pictured members worked on three albums – two eighties albums and a 1990 album titled Impact is Imminent. 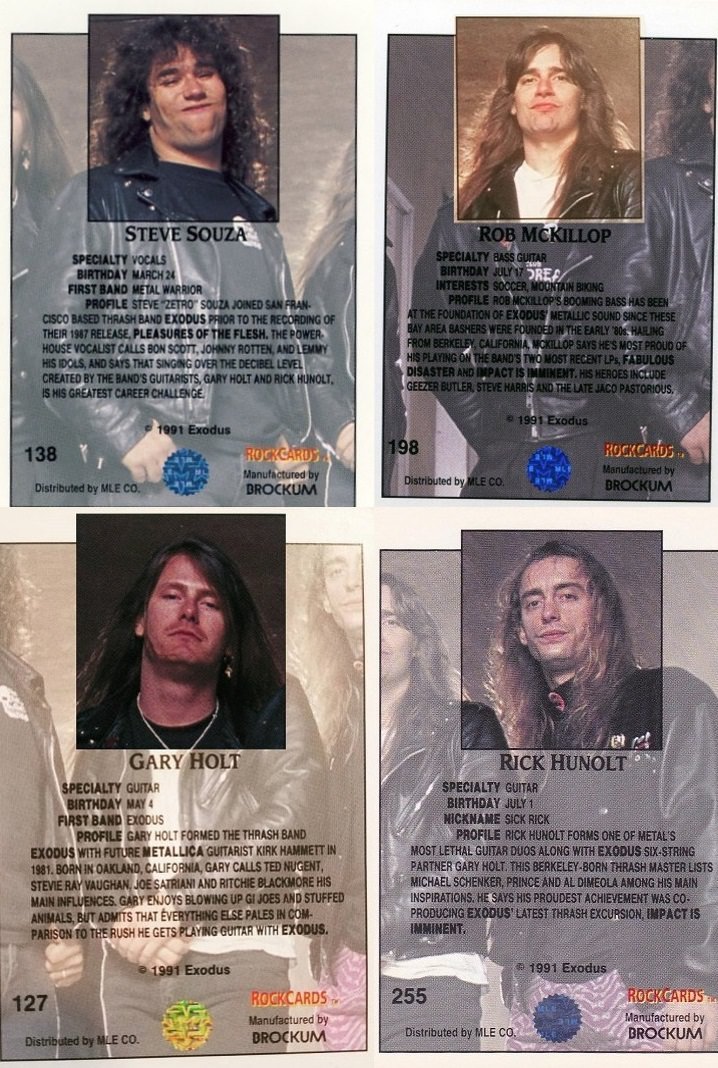 I can imagine that you’re wondering where the drummer is. It’s not that they decided to only use a drum machine, although that would tie in with the humour of two trading cards having info attributed to the wrong members – hence why you can tell that I switched photos. As mentioned in this interview, Tom Hunting left Exodus not because of an illness but, rather, he was getting homesick. More specifically, he was in love with a woman who Gary and Rick hated. Reading between the lines of what Gary said, it would appear that she came out of nowhere because she wanted his money under the false assumption that he was a rock star. My conclusion is that Tom may have been testing her loyalty to see how much that she genuinely likes him if he was no longer in a band. He returned to the band much later, so who knows? 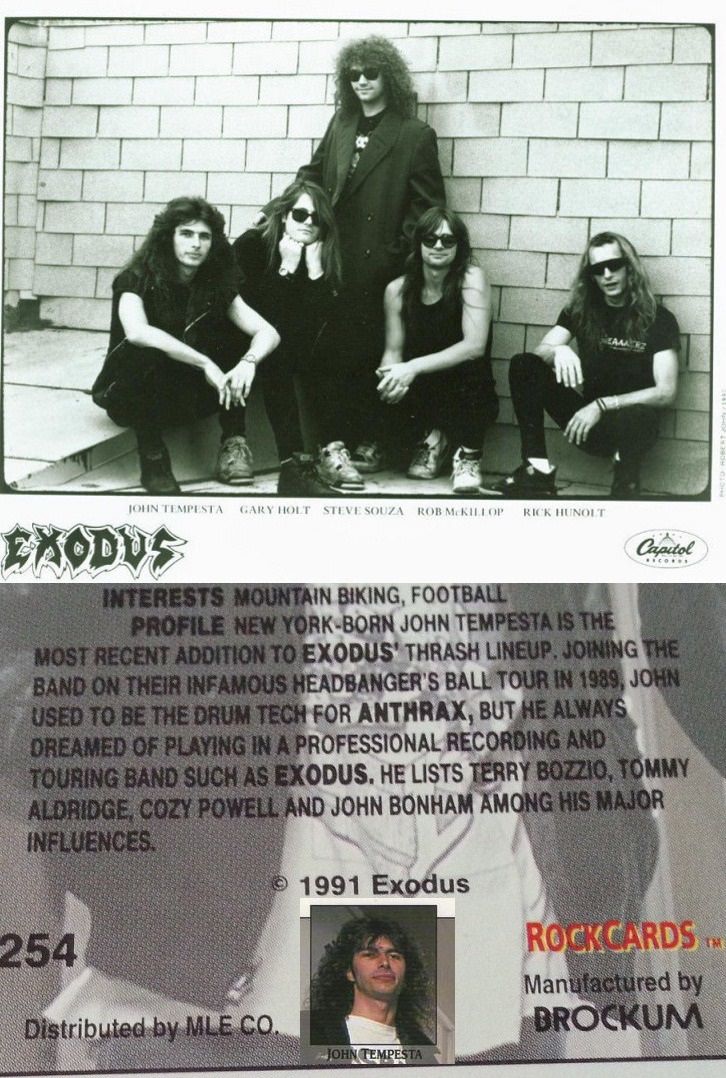 I’m surprised that he didn’t leave Exodus after Pleasures of the Flesh given how the drums, particularly the cymbals, lacked presence on that album. Now that you know who the replacement was for behind the kit, we can move on to the most important exits (since there are too many to talk about). If you read the 106th issue of Kerrang (October 31 in 1985), you will see that Kirk Hammett’s departure actually hurt Exodus more than Gary lets on. Kirk came up with two Exodus riffs that helped make Metallica’s Trapped Under Ice and Creeping Death become enduring classics. It seems strange that Gary and Kirk would fall out over the latter not being much of a thrasher, because the Holt who put a halt to Kirk’s artistic involvement would eventually evolve into incorporating slower rhythms and even acoustic melodies. 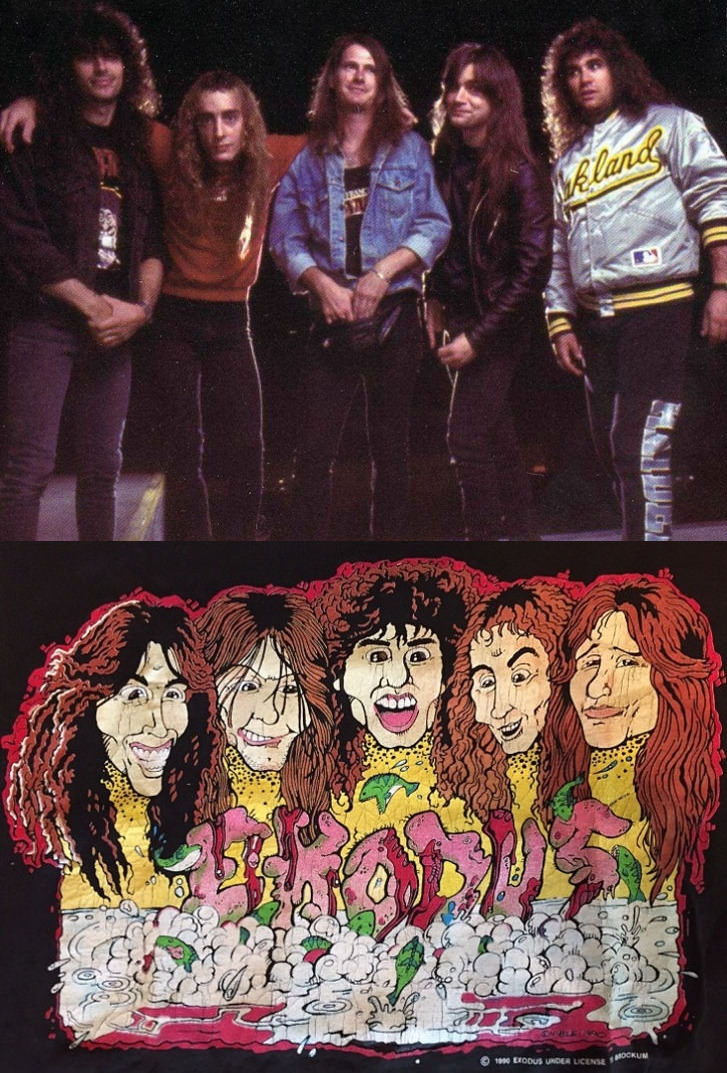 This would be much to Gary’s detriment seeing as how he actually wanted Exodus to be signed up to the same label as Metallica i.e. Elektra. Instead, he was stuck at Combat before the band was signed up with the same label as Megadeth i.e. Capitol. The latter label was responsible for Impact is Imminent in 1990. Besides the same year’s release as another Capitol record, Megadeth’s Rust in Peace, Exodus were overtaken in the sales because the album lacked bass. The lack of a bass guitar on Metallica’s …and Justice for All had inspired the producers, the band’s guitarists, to bury the bass in the mix. This would result in Rob McKillop gradually losing interest in playing in any kind of metal band. This would obviously give the H-Team (as they are called) pause for thought, since they didn’t produce 1992’s Force of Habit. 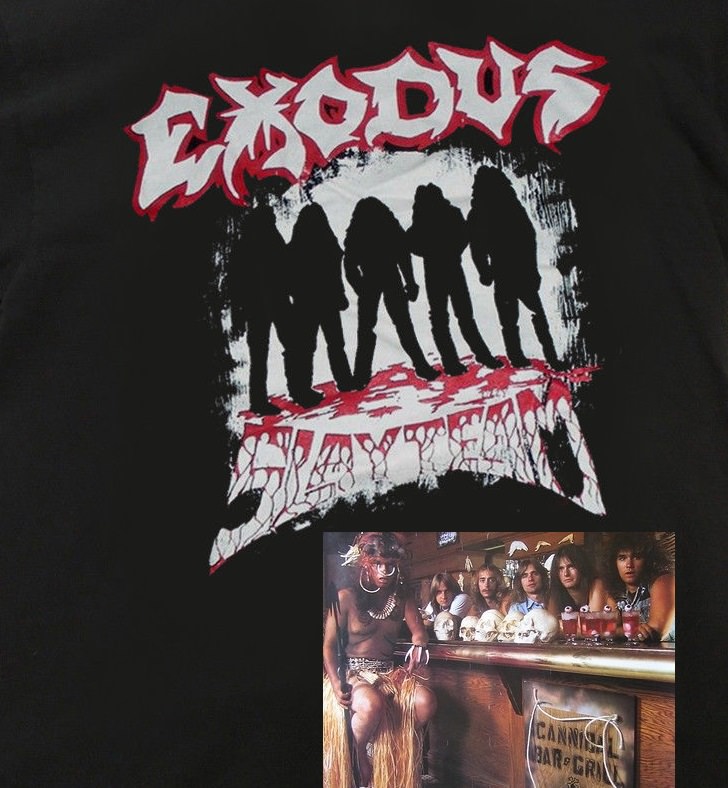 The artwork for the above T-shirt was originally going to be part of the cover for Bonded by Blood. Much like how Metallica’s Kill `em All was initially titled Metal Up Your Ass, Bonded by Blood was initially called A Lesson in Violence. Like how the original cover of Metal Up Your Ass had a dagger emerging from a toilet seat, the one for A Lesson in Violence depicted the band walking down a darkened street where, at the end, there were women who were mutilated. One example of mutilation is that their legs were cut off. The original release date was going to be November in 1984. What delayed things further was that there was an accident with the mastering company who did their master plates. The plates broke, so the whole album needed to be remixed and not just remastered. This caused a three week delay. As for the cover for Pleasures of the Flesh, that was the second reject (after the animated cannibal jungle).