This 1987 film was a precursor to Basic Instinct (1992) in terms of having a bisexual serial killer named Catherine being pursued by a detective who she gets intimate with. Sadly, Black Widow was one of many mid-list films that came and went at the box office during the second half of the eighties. Had the American poster been as iconic as the Romanian poster, it may have stood out more. The best thing about the U.S. poster is that it had an influence on the worldwide poster of The Crow (1994) by having a central male figure stand in front of a white background with a dark column at either side of him, although the original VHS release differed from that as you can see below. 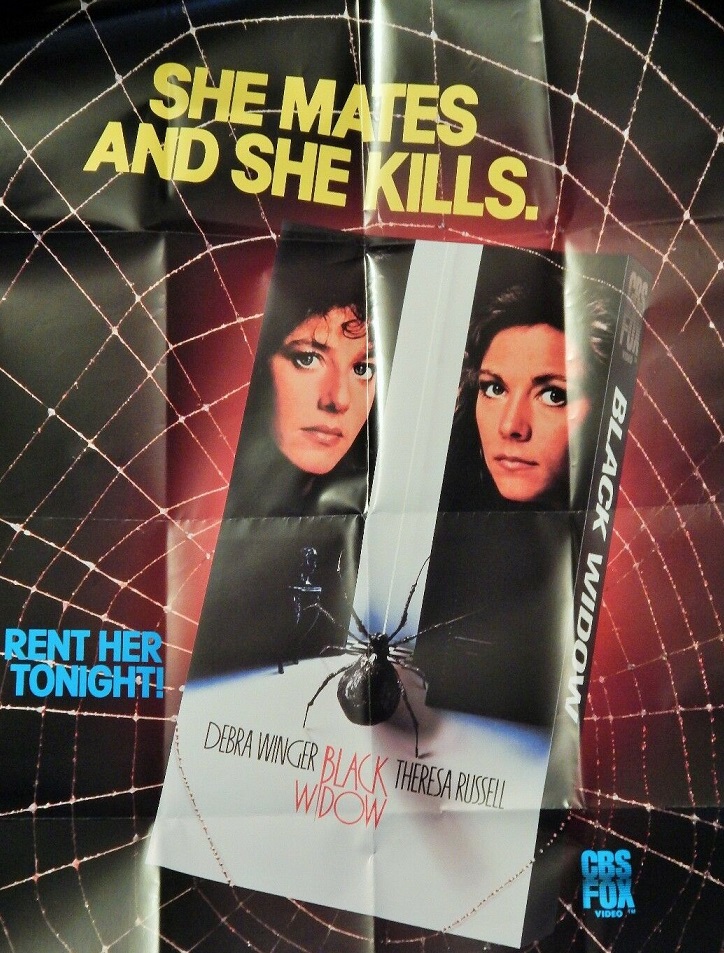 Ultimately, Black Widow didn’t make much of an impact because it wasn’t titillating enough to entice horny men and sexually inclined women nor was the casting esteemed enough to guarantee critical favour. Had Meryl Streep played the role of the charismatic chameleon (as originally intended), the change of outfits and personas would have given it at least some “for your consideration” status (not taking anything away from Theresa Russell’s ability to combine the intensity of Lucy Lawless with the swagger of Michelle Pfeiffer). That ability to wear many hats, literally and figuratively, even came through with the casting of Anne Lockhart, who played two roles – an assistant district attorney and a hotel guest. One particular thing that differentiated Basic Instinct from Black Widow is that having a male detective save the day instead of a female one made it less of an emasculating experience for male audiences regardless of whether we’re talking about alpha males or beta ones.

Another benefit to the box office success of Basic Instinct is that it lacks a happy Hollywood ending. The writer of Black Widow, Ronald Bass, began his career as an entertainment lawyer where one of his clients would later be the writer of Basic Instinct. In fact, Ron once said about him: “I’ve been criticized two or three times by Joe Eszterhas over something I said in an article in the Writers Guild journal several years ago. I said that ultimately, at the end of the day, the director’s vision has to be served, and the writer has to help the director work toward it. I still stand by that. If you want final decision-making authority, you have to direct. If you look at power as I think Eszterhas looks at power, as who’s going to win in a head-to-head confrontation, I don’t think the writer has that kind of clout in our business.”

How both men went about writing their bisexual killer stories amounts to more than who is the real feminist. The question in Ron’s story is how will the heroine catch the killer whereas the question in Joe’s story is could there be another killer? In Ron’s story, the detective has to convince the police that a widow can be the culprit whereas the police don’t question the similarity between the killer’s novel and real life. While Black Widow is emasculating, especially in how it neglects the heterosexual relationships in favour of the interplay between the two women, the film also insults the female audience’s intelligence by having the detective’s boss question the possibility of a woman being clever enough to pull off being a widow on multiple occasions.

What redeems Ron’s story is the possibility that the detective may be crazy in thinking that several widows could be the same woman assuming several aliases. However, there are not enough double takes (mistaken identities) to make the viewer doubt the proceedings. Ron’s story is more surprising because the detective only solves the case by quitting her job and pretending to be someone else in a way that’s reminiscent of the beauty makeover sub-genre of romance films. Like in Joe’s story, the wrong woman is accused of murder except it’s the detective who is blamed. Sensing that the ending would be criticized, director Bob Rafelson told the Bangor Daily News in 1987: “Hitchcock has been lioninzed as a stylist and a master of the whodunit, but he should be even more well-respected as an artist who explored the dark side of human behavior. Those are the things we remember about thrillers; we remember characters and situations but not so much how it all came out, the ending.” 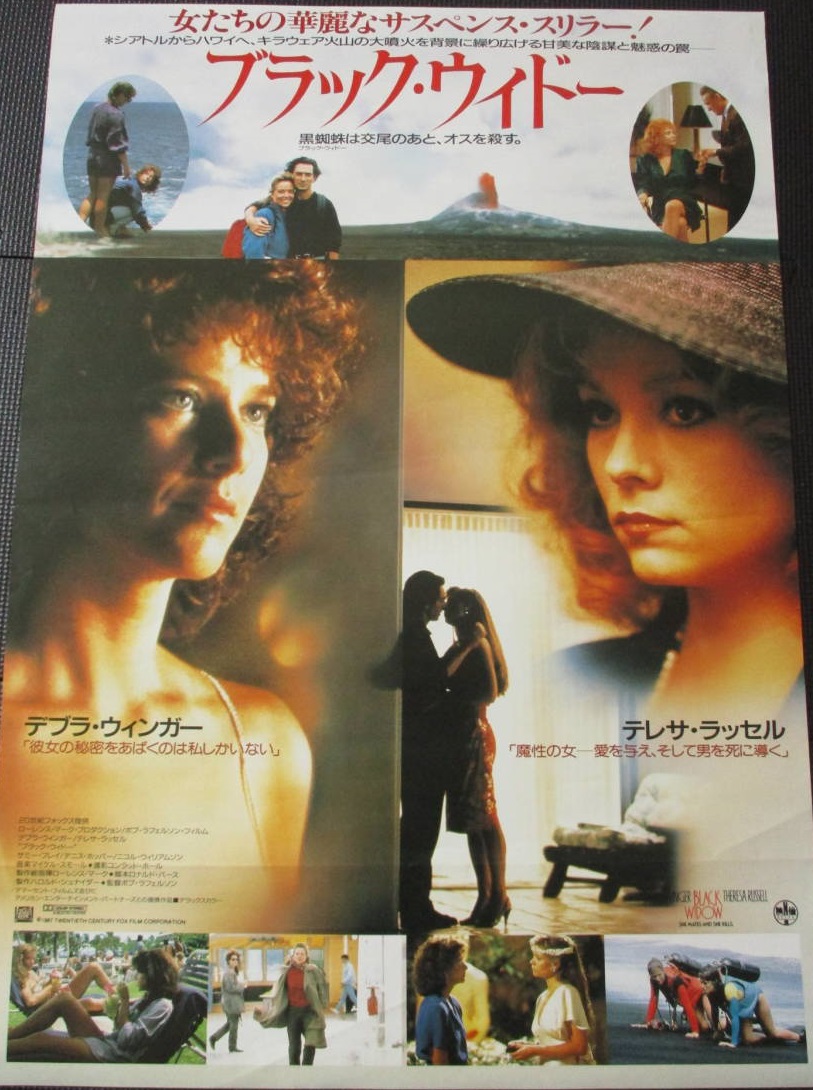 The green colour scheme, imitative idolatry, the poison MacGuffin, the FFM love triangle, nude pool swimming, and the sense of symmetry between the legal adversaries in Black Widow clearly had an influence on Wong Jing when he wrote and produced Naked Killer – a 1992 movie which is often seen as having more in common with Basic Instinct. In fact, it would appear that Basic Instinct was an attempt for director Paul Verhoeven to reclaim what Black Widow had taken from him since it took more than a few ideas from his last Netherlands film before he made the move to Hollywood i.e. The Fourth Man. So intent on outshining Black Widow, Verhoeven had cast Anne Lockhart in a bit part before hiring four crew members to literally make the loudest bang i.e. foley mixer Greg Orloff, sound effects editor Marvin Walowitz, ADR craftsman Norman B. Schwartz and assistant sound effects editor Donald Ortiz. Both films even share the same title designer, Wayne Fitzgerald.

Ron has the last laugh since Black Widow invites more interpretation such as the analysis by Valerie Traub which puts forth the notion that not everything has to be explained in order for a film to be effective. This is impressive considering that the film has enough plot holes and fade outs to suggest deleted scenes. Many have speculated that Black Widow was compromised by the studio, but Theresa admitted in a 1987 interview that she refused to get naughtier. Bob Rafelson had directed another sexually charged thriller years earlier, The Postman Always Rings Twice (it was rated X in 1982), and would later co-direct Tales of Erotica (1996) before directing Porn.com (2002). In a 2009 interview for the Senses of Cinema site, he said: “If I had been making the film in France, those two women would have completely been in love with each other. As it is, we got as close as we could to what would be acceptable in an American movie.”

In the March 3, 1987 issue of Star-News, he claimed that he only argued with Debra Winger on two occasions (this was probably due to the two lip-sharing scenes with Theresa*). Other than that, his relationship with the studio was wonderful. To conclude, here is a continuation of Ron’s earlier statement: “If you look at power in a different way, as the capacity to persuade, the capacity to have the strength of your ideas heard and accepted, I think the writer can have a lot of power. This is a business that has to work by collaboration; it can’t work by confrontation. I would say 90 percent of the time, I feel very comfortable with the extent to which my opinion has been heard and respected. I haven’t won every battle and I don’t expect to.”

* In the February 2, 1989 issue of Chicago Tribune, she described Debra as a very good kisser because: “We did lots of takes, and we experimented with which kiss would look best. We frenched, we did, like, a real gay kiss, we did this little soft whispery one, we even did the Italian macho kiss of death.”

† Two Februarys earlier, she told the Tribune: “We filmed about five different kisses, everything from a Mafia-style kiss-of-death to one that is a very tender ‘I care for you no matter whether you catch me or not.’ And then we shot some in-betweens. I haven`t seen the film yet; so I don’t know what was picked.”