Claudia Schiffer looks like Kim Basinger, who was perceived as the new Brigitte Bardot. This explains the subconscious attraction that led to Claudia being sought out as a model back in the eighties and nineties. What doesn’t get mentioned about her is the age that she was when hired to be the “Whitesnake woman” in the music video to Here I Go Again. She was born in August 25, 1970. The single and video came out in June 1987. Despite the fact that Claudia was fired, what makes it disturbing that she was sought out is that 1986 was when Traci Lords was exposed as an underage porn star. 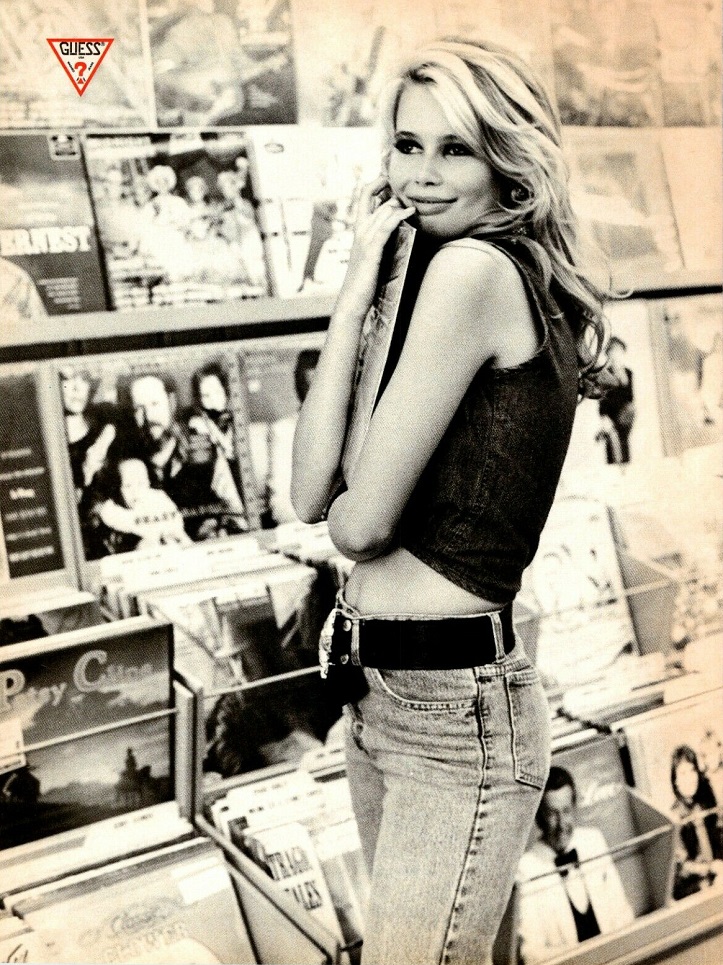 Traci was previously in a Helix video for a song that was released in 1984 – Gimme Gimme Good Lovin’. This was a few months after she turned 16 (she was born on May 7 in 1968). There were two versions of the video – one of them was family-friendly whereas the other had topless models. When Traci was exposed, she was three weeks away from turning 18. Between her and Helix, the latter benefited from the whole “There is no such thing as bad publicity” adage. Had Claudia not been fired from the Whitesnake video, comparisons would have been made in the media about how both girls were only seventeen. This would have allowed Claudia to be most prominently featured in a teenage magazine called Seventeen, and it would have added significance to Winger’s 1988 hit single – Seventeen.

The Traci Lords scandal can’t have flown under Whitesnake’s radar. Speaking of, it begs the question as to how Claudia Schiffer was even on their radar. Officially, her career began in October `87 when, at the age of 17, she was spotted in a Düsseldorf nightclub by Michel Levaton – the head of Metropolitan Model Agency. After leaving high school, Schiffer flew to Paris for a trial photo shoot. Her first campaign was print ads for Guess Jeans then Revlon Make-Up. Many sites cite October `87 as her career origin, but it seems like this was a way to make Michel Levaton seem less creepy.

Still, you have to give her credit for moving on after being fired from what was the biggest opportunity of her life at that time. The irony is that while she was replaced by a woman who was perceived by the director to be hotter, Claudia Schiffer went on to be one of the most successful supermodels of all time. Much to her credit, she is both profitable and charitable. The other woman, Tawny Kitaen, underwent a state of decline in the nineties. What they both have in common is that the `90s were when they, as actresses, played women who love women. Tawny played a lesbian in Three of Hearts (1993) whereas Claudia played a different kind of lady lover in The Blackout (1997). In real life, Tawny was not known for her bisexuality but I do wonder about Claudia.

There was a suggestive topless photo of her and another blonde model wearing jeans. The other blonde grabbed Claudia’s ankles and it looked like she was about to trib her Amazon-style. Then there’s the cover of my article where Claudia kissed Béatrice Dalle on the cover of a German magazine called Gala (circa 1997). Béatrice played a lesbian in Bye Bye Blondie and got intimate with Claudia in The Blackout (starring Matthew Modine and directed by Abel Ferrara). This doesn’t get spoken about much by the English press but the French press interviewed Dalle about the movie and learned that both actresses had bonded over the fact that they shared the same lover – a French actor who Dalle didn’t want to identify.

Then there’s the photo where Nadja Auermann looks like she is about to kiss Claudia. A heterosexual female model, especially one with the status of Claudia Schiffer, wouldn’t feel comfortable taking photos involving intimacy with another woman. In the December 2009 issue of i-D Magazine, she was photographed nude alongside Eva Herzigova and Helena Christensen where they look like they’re moments away from a cuddle puddle. Helena was already naked with two other people, as she was said to have a threesome with Ali Hewson and Bono. On Data Lounge, it was suggested that Bono and Ali have a polyamorous relationship where Ali sees Helena. Back to Claudia, she was involved in another gay photo shoot with Eva for the Paris edition of Vogue’s October 2009 issue. In the photo, both women are clothed but Eva is bending over in front of Claudia’s crotch.

Besides resembling Kim Basinger, Claudia also resembles Chelsea Handler. You have to applaud Claudia for her brain as well as her beauty. Before she became a model, she wanted to be a lawyer. She was halfway to achieving her dream by working in her father’s firm. It just goes to show that you can’t always dismiss a beautiful blonde as a bimbo. Her resilience should also be applauded since Aline Souliers said that the magazine crowd initially didn’t take too warmly to Claudia. A chance meeting with Odile Sarron changed all that, as Aline said: “People thought she looked babyish, too chubby. They’d say She’ll never be more than a catalog queen! Sarron thought she was divine. She booked her right away for the following week, a rare feat for a beginner. Odile has always been ahead of the game. She’s got a good eye.”