Jackie Chan and Eddie Murphy share the same Zodiac sign: Aries. The Zodiac creature is the ram. My star sign is Taurus whose Zodiac creature also has horns. This makes me think that the energy drink known as Red Bull should be called Ram Bull, which is almost a homophone of Rambo – played by a man who has affected the lives of Jackie and Eddie i.e. Sylvester Stallone. Eddie became a bankable leading name when he starred in Beverly Hills Cop, which was rewritten after Sly departed from the project. As for Jackie, appearing alongside Stallone in An Alan Smithee Film: Burn Hollywood Burn gave him the publicity needed to make his big Hollywood comeback in the form of Rush Hour – a movie which was originally written with Eddie in mind as the black detective who teams up with the Chinese inspector. It’s too bad that Eddie turned it down to do Holy Man because otherwise people would have noted the similarities between Beverly Hills Cop (1984) and Police Story (1985). 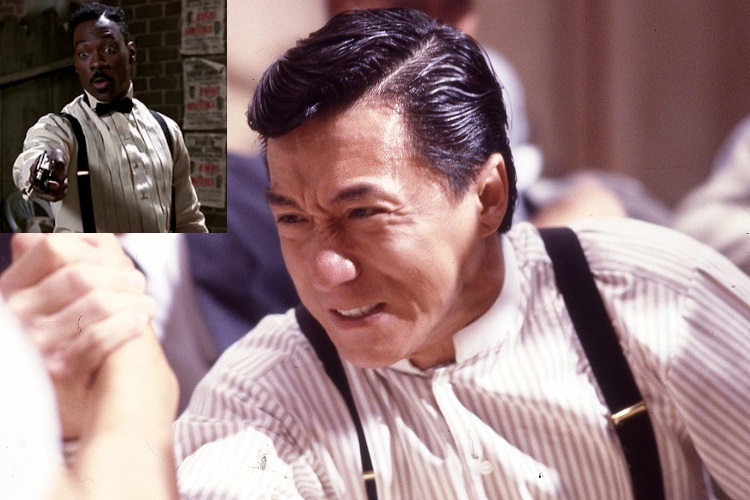 It’s become all too common for people to cite Charlie Chapin and Harold Lloyd as Jackie’s idols but Eddie Murphy deserves more credit for Police Story. Besides Jackie’s hapless cop character having more in common with Axel Foley than the cops that he played in Sammo Hung’s movies, there are glaring instances of Jackie being inspired by Eddie: both movies begin with undercover sting operations which result in the protagonist hanging at the side of a moving vehicle (the protagonists even wear the same dark green cargo pants). Not only do the main characters later suffer a clash with glass, there are homages to Michael Jackson. In Beverly Hills Cop, there are two characters who wear the Thriller costume. In Police Story, Jackie does some moonwalking in order to get rid of cow excrement that he accidentally stepped on. Both movies even share the use of food as a comedy prop. With Axel, there’s the banana in the tailpipe scene and getting a henchman’s clothes dirty in a restaurant. With Jackie’s character, Kevin Chan Ka-Kui, it’s eating noodles with pencils as chopsticks then much later on there are scenes where people shove birthday cake in his face.

Much has been made of Jackie’s Police Story being a way to stick it to James Glickenhaus for how he directed him in The Protector, but little of a case has been made about how Jackie was wanting to do his version of Beverly Hills Cop. In fact, Jackie’s movie should have been retitled in the U.S. as Hong Kong Hills Cop since there are two action sequences involving hills. Much has been said of Stallone using Police Story as a source of inspiration for Tango & Cash but little has been said of how this relates to Eddie’s world. Stallone was inspired by Jackie turning Jim’s thrown lemons into lemonade, so much so that Sly decided to take his original ideas for Beverly Hills Cop and reformat them as a serious film called Cobra (1986). This co-starred Brigitte Nielsen who then played the villainess in Eddie’s Beverly Hills Cop II (1987), where everything came full circle complete with the Cobra poster appearing in the movie. They were friends at the time but their friendship ended after the movie came out, which was two months before Sly divorced Brigitte. Coincidentally, Police Story co-starred an actress named Brigitte Lin.

Stallone had already worked with the Western Brigitte for Rocky IV (1985). Even though she played the wife of Dolph Lundgren’s Ivan Drago, he was dating Grace Jones at the time. It’s a small world and an even smaller dating pool when you look into Grace’s background. She appeared in Conan the Destroyer (1984) which was followed by a 1985 spin-off movie (Red Sonja) where Arnold Schwarzenegger played Conan. During the making of this spin-off, Arnie had an affair with the star: Brigitte. Grace was a polyamorous bisexual, so who knows how far that her reach had literally exceeded. One thing is certain: she had a relationship with Arnold’s stunt double and hired henchman, Sven-Ole Thorsen. Grace had a connection to both Jackie Chan and Eddie Murphy. In a Chinese magazine called Cinemart, there was a photo of Grace with Jackie in New York circa 1987 – the same year when Police Story was screened there. Grace’s connection to Eddie is that she would later appear in Boomerang (1992). In an interview for the Hong Kong Legend DVD release of The Big Brawl (1980), Jackie talked about how he has always had a huge black fan-base in the U.S. 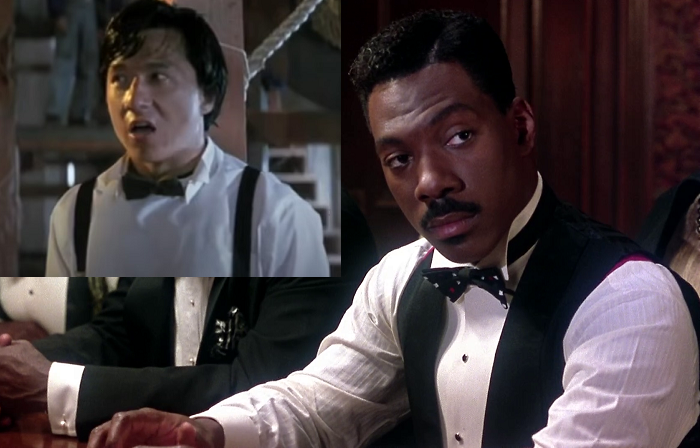 Ironically, it never occurred to film company Golden Harvest that they should have Jackie break the U.S. market via this demographic. Instead of trying to get Jackie to pair up with Tom Hanks in the unmade Singapore Sling, they could have got Jackie to co-star opposite Eddie Murphy in The Golden Child (1986). The Golden Child has a strange connection to Jackie in that the movie went into production around the same time that Jackie was doing his own mythical adventure movie: Armour of God. Even more ironic is that Jackie originally wanted an African actor to be his co-star instead of Alan Tam. Jackie wanted N!xau from The Gods Must Be Crazy (1980). He must have been more popular than Eddie in H.K. because N!xau later got to be in three H.K. movies – Crazy Safari (1991), Crazy Hong Kong (1993) and The Gods Must Be Funny in China (1994). To give you an idea of the timing, Eddie became attached to The Golden Child in June of 1985 – three months before Jackie got into the infamous accident that nearly ended his life during the making of Armour of God i.e. September 7 (as reported by Jackie’s manager for an English fan club announcement).

One of the writers for Armour of God was a Canadian named John Sheppard. He had done some uncredited writing on Jackie’s The Protector (which was made in 1984 and released in 1985). Ironically, John is more famous for being one of the writers for the original MacGyver TV series. The original series had an episode that was a rip-off of The Golden Child i.e. The Wish Child aired on October 20, 1986 – two months before the release of Eddie’s movie. There is a twofold irony here – John joined the MacGyver writing staff in 1988, and Jackie would end up doing his own version of The Golden Child many years down the line in the form of The Medallion (2003). The Golden Child had already been remade by Hong Kong filmmakers when Cynthia Rothrock co-starred in her final H.K. movie, Prince of the Sun. As for the Aries stars that this article is about, both The Golden Child and Armour of God have been declared to be the worst of their eighties output; so maybe they should have pooled together their efforts to make one Hell of a crossover event.

Later on, Jackie ended up directing Miracles and Eddie decides to one-up Jackie on that score by directing Harlem Nights. The filming schedule for Jackie’s film lasted from December 1988 to March 1989 whereas Eddie’s film began filming in April 1989 and finished in July 1989 – a month after Jackie’s film was released in H.K. cinemas. The original English title for Jackie’s film was Mr. Canton and Lady Rose. The surname of the detective in Eddie’s film, Cantone, could be seen as a reference to this. Both films take place in the `30s, and are about gangsters involved with a nightclub. For local audiences in Hong Kong, the appeal behind Miracles was to see Jackie square up against old cinema favourites Ko Chun-Hsiung and Lo Lieh. The equivalent in Eddie’s film was seeing him alongside Richard Pryor and Redd Foxx. Either Eddie had some inside track courtesy of a friend who was working on the movie or he got his intel from a Westerner who was interviewing Jackie. 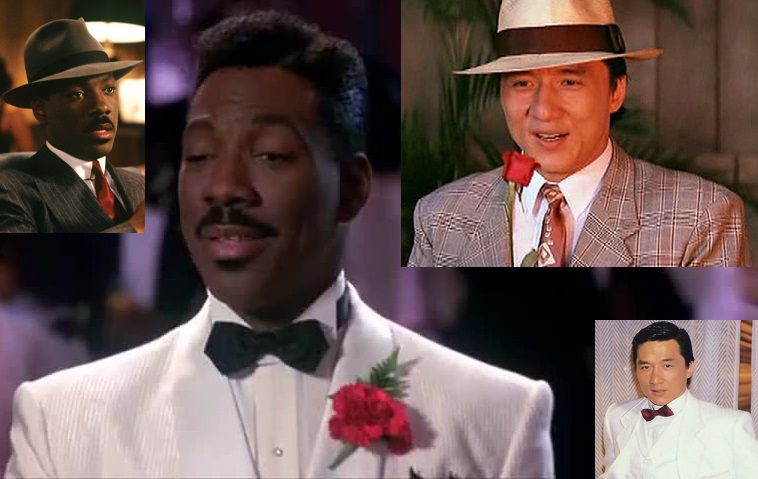 People don’t realize this but Hollywood can easily use journalists to get the latest scoop of what’s going on in foreign cinema, especially back in the old days when you had Westerners writing magazine articles where there were photos galore to feast your eyes on. Imagine the feeding frenzy that went on when Hollywood insiders would read issues of Impact or Eastern Heroes. The concept of bated breath was made easier or worse depending on the window of time that existed from exhibition in magazines to exhibition in cinemas (or even video). During the late eighties, Jackie was visited by several Westerners such as Chuck Henry for his U.S. TV series (Eye on L.A.) and Jonathan Ross for his British TV series (The Incredibly Strange Film Show). On October 6 in 2017, Miracles was screened at Beyond Fest in the Egyptian Theatre where another comparison with Harlem Nights came into play. Four minutes into this Q&A session, Jackie addressed the issue of an actress who wasn’t available to complete filming due to time constraints.

Eddie must have got wind of this because he suddenly decided that he should replace his actress too. The part of Dominique La Rue as originally played by Michael Michele before Jasmine Guy took over. Eddie claimed that it wasn’t working out but Michael claimed that it was because of his casting couch strategy. The actress who Gloria Yip replaced for the role of Belle wasn’t named by Jackie. The difference between both recasting scenarios is that you can still see the original actress in Jackie’s movie because there wasn’t enough time and money to replace the photograph that Belle was seen in during the long distance shots. The original actress looked like Moon Lee, which might explain why she starred in a 1989 film whose villain was named Jackie Chan. The studio behind the film, Killer Angels, was Golden Harvest. The director was the producer – Tony Lou Chun-Ku. He appeared in a 1972 film whose Chinese title is the same as the one for Armour of God (i.e. Dragon Brother, Tiger Brother).

Not content with merely letting the comparisons ends there, Eddie wanted to outdo the amusement park action sequences in Jackie’s My Lucky Stars (1985) when the time came to do Beverly Hills Cop III (1994). Back to the Zodiac connection, Jackie was born on April 7 in 1954 whereas Eddie was born on April 3 in 1961. Although they haven’t worked together, they did technically work on the same film – the original Mulan film i.e. Disney’s animated 1998 venture. Jackie dubbed the voice of Li Shang in the Chinese versions of the film. Jackie and Eddie working separately is pretty much similar to what usually happens on these animated movies. In this setting, actors only really work alongside each other if they are having a table read. When they record, they’re isolated (similar to what happens when bands record their individual instruments).