The drummers of Mötley Crüe and Metallica have shared similar criticisms from other bandmates although not about the ones which you are thinking of i.e. their drumming talent. 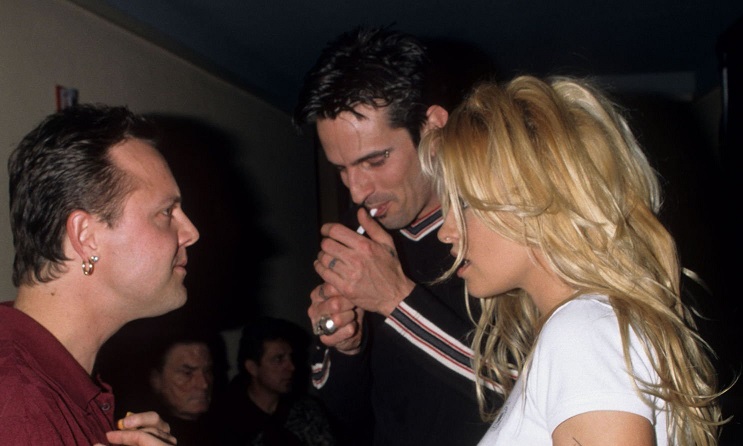 Mötley’s singer, Vince Neil, has this to say about Tommy Lee’s desire to be trendy: “His only problem is that he is so scared other people won’t like him that he lies to make himself look better. That’s the way he is and that’s the way he always will be. He’s a chameleon. Whatever is in, he wants to do that. He never really stuck to what made him what he was, which was rock and roll. If hip-hop is in, he is a hip-hopper. If Punk is in, he is a punk rocker. If Tommy had fucking tits, he’d be a Spice Girl.” 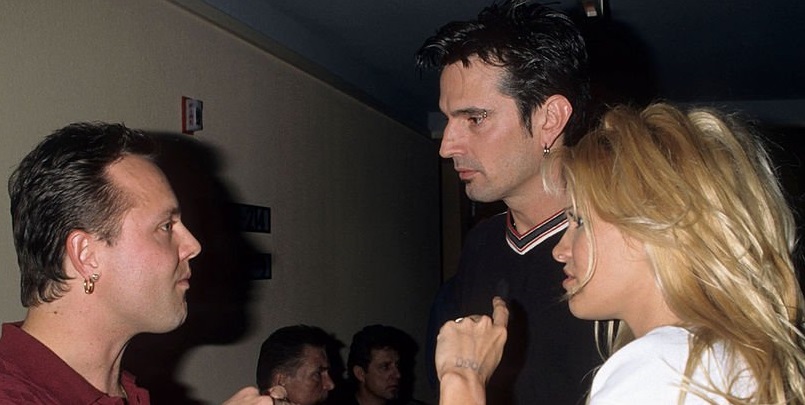 Metallica’s singer, James Hetfield, had this to say about Lars Ulrich’s infatuation with Axl Rose: “We were this band that was so anti-L.A., anti-Hollywood, and Lars was out there posing. Guns ‘n’ Roses to me were part of the enemy, and Lars was out there with them, posing up a storm. Lars is that way. He will be infatuated with certain people in his life and need to get into them. He likes learning things from people who have that something, and Axl had that.” 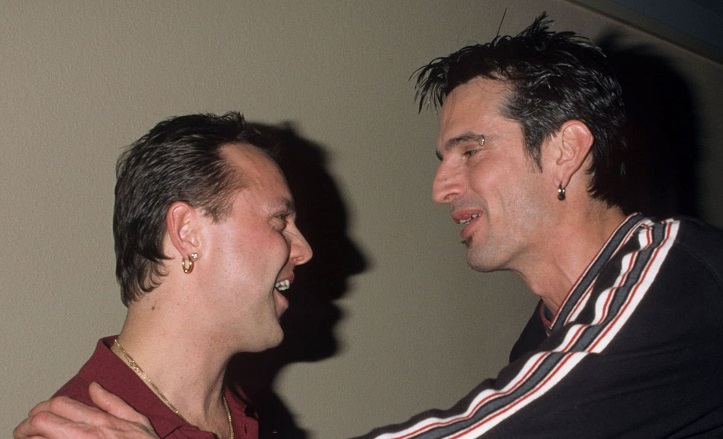 Mötley Crüe’s self-titled 1994 album owes a debt to Metallica’s self-titled 1991 album. Both albums were produced by Bob Rock, and they were an attempt to be heavier while branching out to a wider audience. Both albums even had similar working titles. Metallica’s 1991 album was going to be called Married to Metal due to the collapse of three marriages (i.e. the Hammett, Ulrich and Newsted couples). Mötley Crüe’s 1994 album was to be called Till Death Do Us Apart, although this was because of John Corabi replacing Vince Neil as the singer. This was the title of a song, much like how Metallica’s 1991 album was almost called Don’t Tread on Me due to the snake logo associated with that motto. But while Metallica’s LP was known as the black album, the MC album didn’t have any iconography to make it iconic. They could have at least called it 1994 as a nod to Van Halen’s 1984 album. 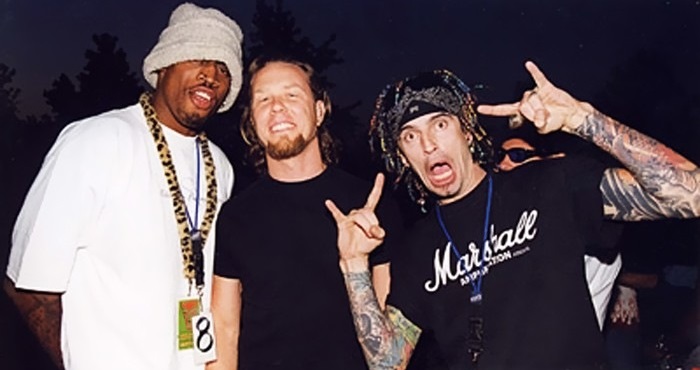 Like with the black album, marriages had ended for Mötley Crüe. From another point of view, MC’s eponymous album is comparable to Metallica’s Load album since both albums were a huge stylistic departure from their previous work. Both albums were criticized as being trendy attempts to fit in with the alternative rock scene in a post-grunge climate, especially when you look at their clothes and hair-cuts. Ironically, the cover of Metallica’s black album owes to Mötley’s Shout at the Devil in that you could barely see the pentagram on the latter’s cover. Both bands had already experienced similar progressions throughout their careers. Shout at the Devil has a half-brother in the form of Metallica’s Kill `em All. These albums were released in 1983 and showcased both bands at their most metal in terms of image, lyrics and sound. 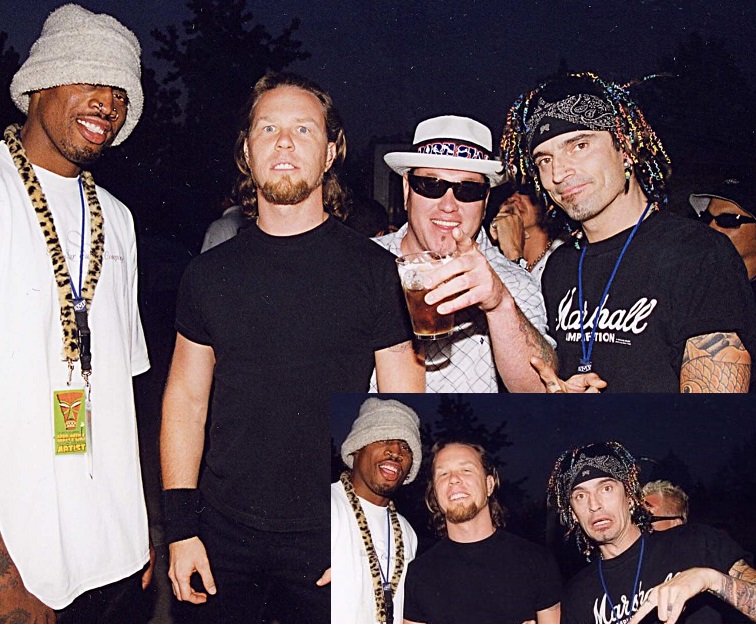 Their next albums were criticized by hardcore metalheads for having ballads. Mötley’s Theatre of Pain had Home Sweet Home and Metallica’s Ride the Lightning had Fade to Black – both ballads were inspired by hardships that came from touring. Both Mötley Crüe and Metallica share an affinity for punk rock which is mostly evident on their first albums – the aforementioned Kill `em All and Too Fast for Love. Although metalheads would cry foul at the mere suggestion of Metallica using keyboards like Mötley did during their heyday, Metallica did have keyboards played on the black album despite what the liner notes may suggest. You can even see Mötley’s future producer, Scott Humphrey, playing a keyboard for The Unforgiven in their documentary about the making of the album: A Year and a Half in the Life of Metallica. This documentary inspired the Crüe to have their own doc to promote their 1994 album but it didn’t get released. 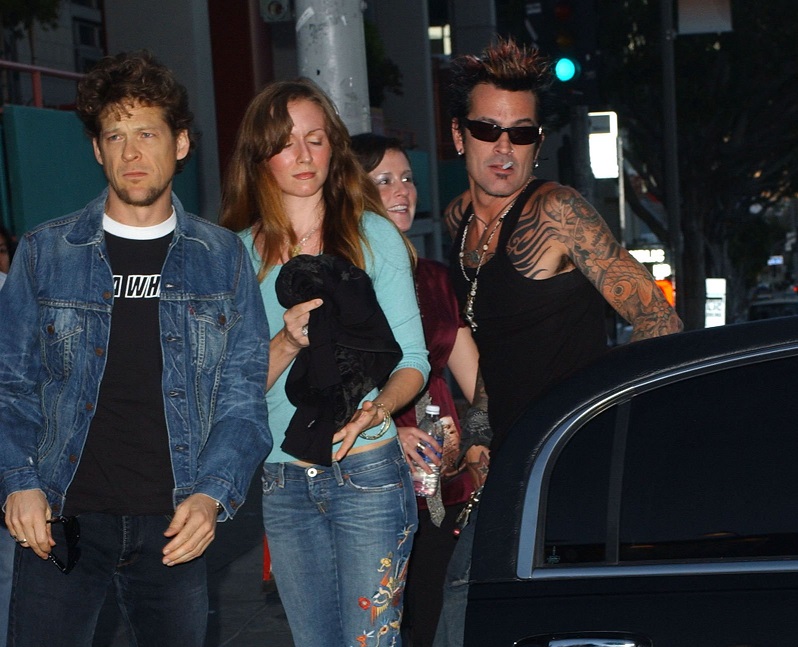 Mötley Crüe’s first album with Bob Rock, Dr. Feelgood (1989), was the reason why Lars Ulrich chose him to produce the black album. Both albums were the fifth LP for each band. Both bands benefited from being heavier while being forced to be scientific perfectionists in a manner not too dissimilar to Robert “Mutt” Lange pushing Def Leppard to the brink of insanity. The difference is that Crüe were already more experimental than Metallica and achieved less phenomenal success despite the inclusion of guest singers in the form of Bryan Adams, Aerosmith’s Steven Tyler, Skid Row and the singers of Cheap Trick – Robin Zander and Rick Nielsen. Had Mötley Crüe’s Nikki Sixx succeeded in enlisting Quincy Jones as the producer of Dr. Feelgood, James Hetfield would probably have convinced Lars to hire producer Bruce Fairbairn since he had produced two consecutive hit albums for Aerosmith in the late eighties – Permanent Vacation (1987) and Pump (1989). They were Hetfield’s favourite band in the seventies. 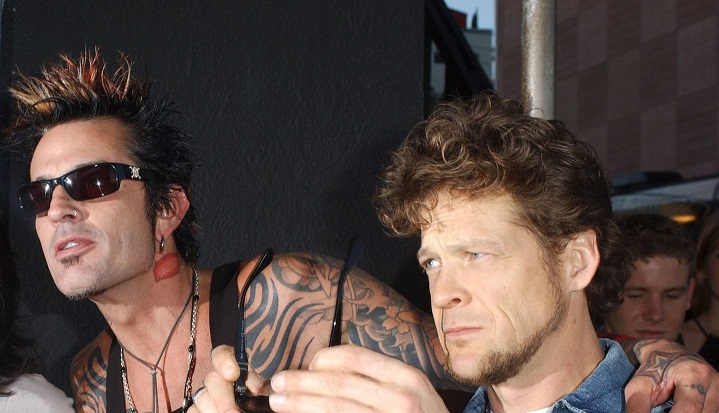 Mötley’s guitarist, Mick Mars, talked about how rehab affected his drummer – Tommy Lee: “The whole process was hardest on Tommy, I think, because he’d gotten to the point of being ultra-temperamental when he was rotted and, after a blow-up at his house on Christmas Eve, he needed to get sober to save his marriage. He was just a baby when the band took off, and I guess you lose your sense of perspective when you’re a teenage millionaire.”

Metallica bassist Jason Newsted said something similar about Metallica’s rhythm guitarist James Hetfield, who went to rehab after Jason left the band. Before Jason joined the band, James had barely come to terms with the death of Metallica’s previous bassist – Cliff Burton. Jason said: “When you get young guys together and they all become millionaires by age 25, you miss a few developmental stages that everyone else — people who live a less-accelerated lifestyle — go through.” 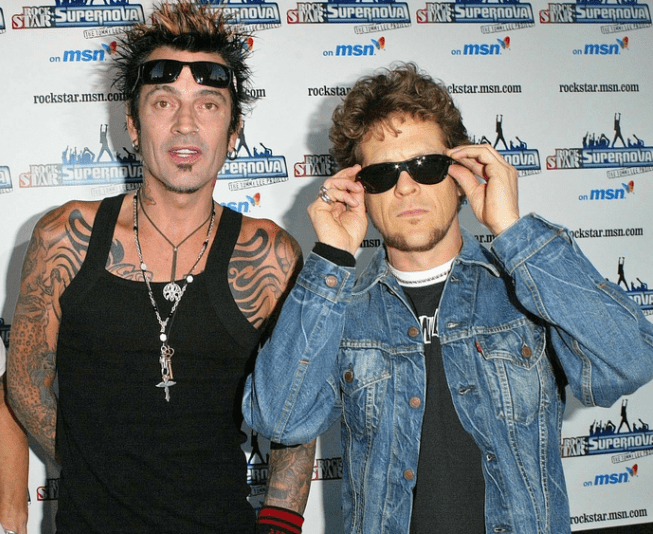 Perhaps it’s not too surprising that both guys were mistreated by their bandmates. Jason was hazed for replacing the dearly departed Cliff whereas Mick Mars was given a hard time for having a relationship with one of Mötley’s back-up singers i.e. Emi Canyn. Like how Reload was Metallica’s final album with Jason, Generation Swine (1997) almost did the same thing for Mick. In the band’s 2001 autobiography, The Dirt, Mick said: “Where I really had been ready to leave the band when they were being @ssholes because I was dating Emi on the Girls tour, now I was a little too scared to go through with it. What else was I going to do? I saw what happened to Vince on his own, and I’d seen a dozen other bands where a guy splits off and it doesn’t work out for him. There was nothing else for me to do but be the guitarist in Mötley Crüe. Even if that meant just hanging in and taking the abuse.”

ln 1987, Mötley proved that they were successful enough to travel across the States by plane. Metallica naturally followed suit when they began touring for their …and Justice for All album in 1988. The most interesting difference between both bands is how much home video footage that they are willing to share to the public. Despite Mötley being more prolific with music videos during the eighties, the YouTube era has made it apparent that Metallica have less things to hide with their home videos. 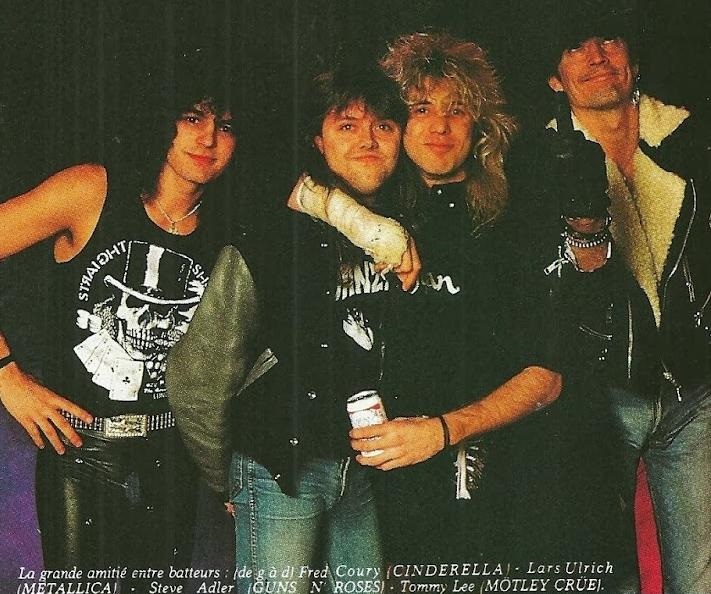 Visually, Mötley Crüe have more in common with Slipknot in how each album represents a stylistic makeover for what the band looks like. Metallica were only vaguely similar in that Cliff Burton’s death resulted in the band only wearing black on stage. When Metallica got round to making music videos for the black album, Wayne Isham was hired because he had worked his magic for the MC men. Even before Dr. Feelgood being cited as the inspiration for Metallica’s new sound, the Crüe influence can be heard on Master of Puppets (1986). Lars liked how Michael Wagener had mixed the Crüe’s first album (released in 1981), but he never got round to hiring Mike for Metallica because he was usually too busy mixing Dokken’s albums – Breaking the Chains (1983) then Tooth and Nail (1984) before Under Lock and Key (1985).

Dokken and Metallica were signed to Elektra Records thanks to Q Prime Management. Despite Lars being okay with taking photos with a glam rock star such as Poison’s Rikki Rockett, he never went out of his way to take photos with members of Mötley Crüe. The above and below photos of drummers being the exception to the rule. In the April 6, 1991 issue of Kerrang, Lars acknowledged the influence of MC: “We felt it was time to make a record with a huge, big, fat low-end and the best sounding record like that in the last couple of years – not songs, but sound – was the last Motley Crue album. We really liked the really big fat sound on Dr. Feelgood. The way I look at it is that Bob Rock brought out the best that Motley Crue had to offer and made the best Motley Crue record.” 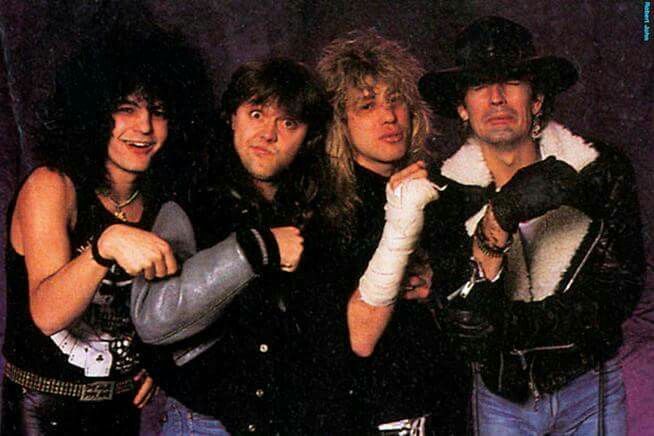 In an alternate timeline where Quincy Jones produces MC’s fifth album, Lars Ulrich would be talking about how Bruce Fairbairn produced the best-selling albums of Aerosmith, Bon Jovi and Poison. He also produced one of AC/DC’s best-selling albums, The Razors Edge (1990). In the Mötley memoir, Nikki said something that got me thinking about Lars and Metallica’s lead guitarist – Kirk Hammett. When talking about 1989, Nikki said: “Some of the guys from Metallica walked up to me at the Cathouse and offered to buy me a drink, but when I said I was sober, they walked away and wouldn’t speak to me.”

James Hetfield would never have been wanted to be seen with Nikki whereas Jason Newsted never socialized with Kirk and Lars outside of band business. However, James once looked after Jason’s cats while Jason was away. It’s too bad because James and Nikki are both intelligent lyricists who are well-read. It’s also a pity that Kirk never hung out with Mick Mars because, as the Crüe’s oldest and most mature member, he had a lot to offer to Kirk as a guitarist. Both guys have heavy blues influences. 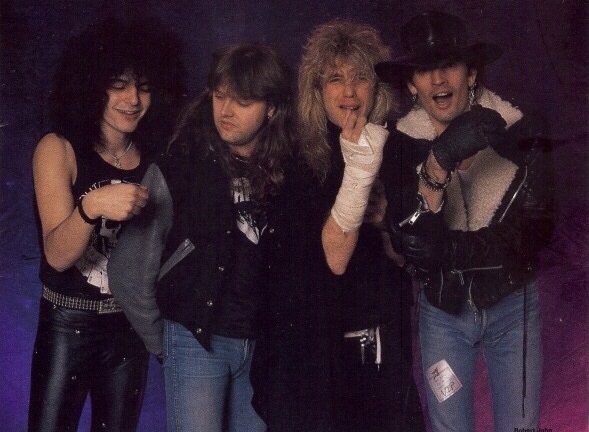 It’s a shame that Nikki never got to hang out with Cliff Burton. Like Cliff, Nikki was never content to have the bass side-lined in his metal band. While not as revolutionary with the instrument as Cliff (or as classically trained), Nikki’s strong bass presence in the mixing of his band’s albums meant that they stood out from a whole heap of `80s metal bands who were a tad too treble-heavy. Mainstream metal bands aside, even the underground metal bands were guilty of this. Iron Maiden was the exception to the rule regarding the former whereas Fist were the latter’s exception.

Had Quincy Jones been the producer of Dr. Feelgood as originally planned, the bass would still have been high in the mix. The electric guitar would probably have not been doused with reverb, but you don’t need reverb to make the heavy funk that the Crüe wanted to make. As for the powerful drum sound often attributed to Bob Rock, that only happened because Tommy Lee is a big fan of rap music. Even Bob admitted this. Finally, it’s weird that MC isn’t seen with Metallica much given how they were both signed to Elektra Records. Despite being more glam, Nikki is similar to James in how he perceives himself alongside fans. In an old issue of Circus, Nikki said: “I talk to them and it’s not like, there’s a rock star and there’s a fan. You can break all those barriers down.”