What I like about Scrubs is that the cutaways (or tangential scenes) made it the live-action equivalent to Family Guy. It’s baffling that John C. McGinley had to go through a literal handful of auditions (which you could completely count on one hand) to get the role of Dr. Cox. It makes me wonder whether the producers wanted his considerably more famous lookalike – Tate Donovan. The age gap between John and Zach Braff is 16 years. This is the same age gap as the one between myself and my big brother. 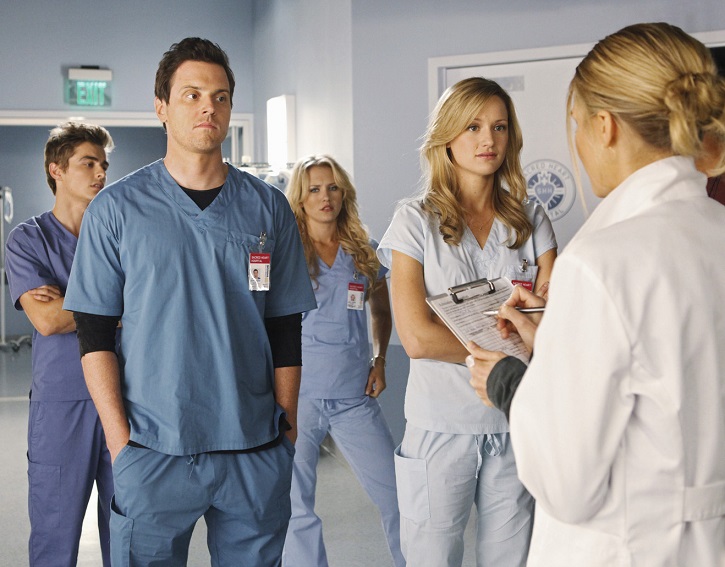 House became known for a universal catchphrase that actually originated from Scrubs, courtesy of Dr. Kelso: “Everybody lies.”

That said, it’s rather peculiar that Kelso is the surname of a characters in another TV comedy – That `70s Show. I’m sure that there were accusations of piggybacking if not plagiarism. A case (not a court case) could be made about how Scrubs carried on the tradition of having a character who is regularly talked about but never seen. This gimmick began with Cheers (Norm’s wife: Vera) and Frasier (Maris: the wife of Niles) then continued with Friends (Ugly Naked Guy). In the case of Scrubs, it was Enid (Kelso’s wife).

My First Coat (a season 2 episode) has a character named after a writer of The Simpsons – Dana Gould. It would have been better if we got more special guest appearances from famous actors who previously played doctors on TV like Jack Klugman from Quincy, M.E. and Neil Patrick Harris from Doogie Howser, M.D.

In 2018, I saw the entirety of Scrubs on Comedy Central U.K. where the channel had been sending a bad message by muting the sound of someone saying condoms (season 3, episode 9: My Dirty Secret) and deleting a scene that showcases them (season 3, episode 17: My Moment of Un-Truth).

A season 4 episode of Scrubs (episode 13: My Ocardial Infarction) came to my mind when I was reading a sample of Kareem Abdul-Jabbar’s 1985 book, Giant Steps. In Scrubs, Elliot teaches J.D. how to deal with train-wreck codes by breathing slowly so that everything will slow down. When another such code occurs, J.D. breathes slowly, everything slows down, and he succeeds. In Kareem’s book, he referenced Bruce Lee by saying: “The Chinese call it chi; the Japanese, ki; the Indians, prana – it is the life force, and it is incredibly powerful. I was familiar with the concept of chi, but Bruce showed me how to direct it, to focus it for fighting. I extended this and used it in preparation for basketball as well. I was quite amazed to find, after working with Bruce, that when I really had my presence of mind, when I did indeed control my life force, I saw things coming in slow motion with plenty of time to get out of the way.”

Clip shows are the best example of what it means to create bottle episodes. However, My Déjà vu, My Déjà vu (season 5: episode 22) encapsulates the agenda of a clip show (nostalgic to old fans while bringing in new fans) but in a way that goes without rehashing footage. It actually reminds me of a scene in Once Upon a Time in China and America (1997) where Wong Fei-Hung’s memory needs refreshing, so he’s reminded of what happened in the previous films.

The “nagger being mistaken for a racial slur” joke in With Apologies to Jesse Jackson (an episode of South Park) is also heard in Scrubs (Season 6, episode 16: My Words of Wisdom). The former was aired on March 7 in 2007 whereas the latter was aired on April 12 in 2007. Bearing in mind that it often takes a long time for an episode to go from being recorded to being aired. Kevin Biegel (who was a story editor on My Words of Wisdom) had worked on both shows, but the only South Park episodes that he is credited on were ones which aired in 2008.

Besides time slot changes, Scrubs got hurt by the ratings due to episodes being switched around e.g. episode 5 of season 8 was meant to be episode 1 but ABC were so desperate to have Courteney Cox (Friends co-star) appear straight away that not even some pick-up shots could hide the switch.

Season 9, the final season, is where you can see an attempt to have new characters be substitutes of the old regulars…

Denise = Cox (the cynical one)

I don’t like season 9. I understand that it was supposed to be a different TV series altogether i.e. Scrubs: Med School, so it’s like those movies which end up being forced to be called sequels (or even like solo albums which are forced to assume the name of an artist’s main band). When Scrubs changed networks (from NBC to ABC), it seemed like there was an attempt to reboot the series – different film stock along with a different style for the episode titles and closing credits.

One of the writers and producers on Scrubs was Tim Hobert. He carried on the tradition with a new series called The Middle, albeit it had less drama. Both shows had Neil Flynn as one of the main actors. Both shows had a similar acting style among the leads – Eden Sher could almost be described as mimicking the body language and speech patterns of Sarah Chalke. As such, it’s natural that both shows share some of the directors: Ken Whittingham, Gail Mancuso, Michael Spiller, Chris Koch, John Putch, Victor Nelli Jr.