This is the Hong Kong title for So Close. Because it was made in 2001, it’s safe to say that they weren’t cashing in on the making of Kill Bill. It’s a lame shame that people associate the jumpsuits in the publicity photo with Quentin T’s movie than Bruce Lee’s Game of Death. What was calculated in a contrived way was the casting being derivative of the formula behind The Heroic Trio (which should have been titled The Heroine Trio). The format involved casting a cute face (who happens to be Shu Qi), a singer (this would be Vicki Zhao) and someone who is recognizable from martial arts movies (i.e. Karen Mok). Indeed, the project was conceived during the same time that The Heroic Trio was being filmed (during the fall of 1992). The project took years to get off the ground because the girls with guns genre waned in popularity. Ironically, Corey directed the hospital escape in The Heroic Trio.

The worldwide success (albeit barring Hong Kong) of The Matrix rekindled the project, whose working title was Angels of the Dusk during pre-production in the spring of 2001 (specifically April). During production, it became Virtual Twilight because of the internet premise. In post-production, the English title became So Close because of a song by The Carpenters (Close to You). This is unfortunate because having it be known as Virtual Twilight would have got more notice by people who search for any of the Twilight movies on IMDB. So Close should have been titled So Close to Death. Still, this movie is described as being superior to the Charlie’s Angels duology (i.e. the two movies starring Cameron Diaz, Drew Barrymore and Lucy Liu). Originally, the martial arts starlet (without being an actual star) was meant to be Cecilia Cheung but she turned out to be too busy. 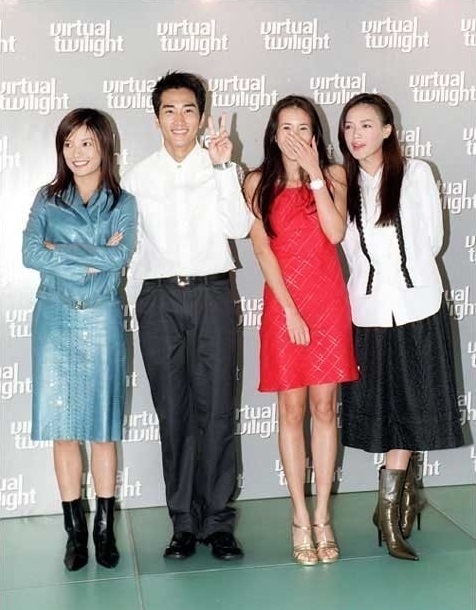 In reality, it was because Jet Li dropped out of playing what would have been the Chinese equivalent to Charles Townsend. It’s a shame because Cecilia had shown some potential in Tokyo Raiders (2000). Her drop-out would have unforeseen ramifications. Her replacement, Cathy Tsui Chi-Kei (who was previously seen in a Tsui Hark action film called Time and Tide), was dropped in favour of Karen Mok because Karen was in a 2001 summer movie titled Shaolin Soccer. It became the highest-grossing H.K. movie. The singer choice, Coco Lee, was dumped in favour of Vicki Zhao. The latter also had more relevance because of Shaolin Soccer. The cute face, Candy Lo, was ditched in favour of Shu Qi because Shu was going to be cast in an international production called The Transporter (which would be directed by the same guy who was going to direct So Close). Last minute changes in casting are usually avoided in H.K. because of legal complications that result in worthless costs. There was a lot riding on So Close.

For a H.K. movie, it’s unusual to take a year to go from pre-production to release. Even weirder, still, is that the movie was pitched to Columbia TriStar in the spring of 2000. What was going on from spring 2000 to spring 2001 can be boiled down to three things. Corey Yuen directed the pilot of a show titled Freedom (featuring Darius McCrary from Family Ties). Then he collaborated with Jet Li on Kiss of the Dragon and The One (which were made back-to-back). After filming ended for The One in May of 2001, he trained Karen, Vicki and Shu during the entire duration of June. Following on from that was a couple of filming months. So Close would have been perfect for a Chinese New Year release, but it was delayed because of the box office competition – Chinese Odyssey 2002 and Fat Choi Spirit. It still flopped months later in September. 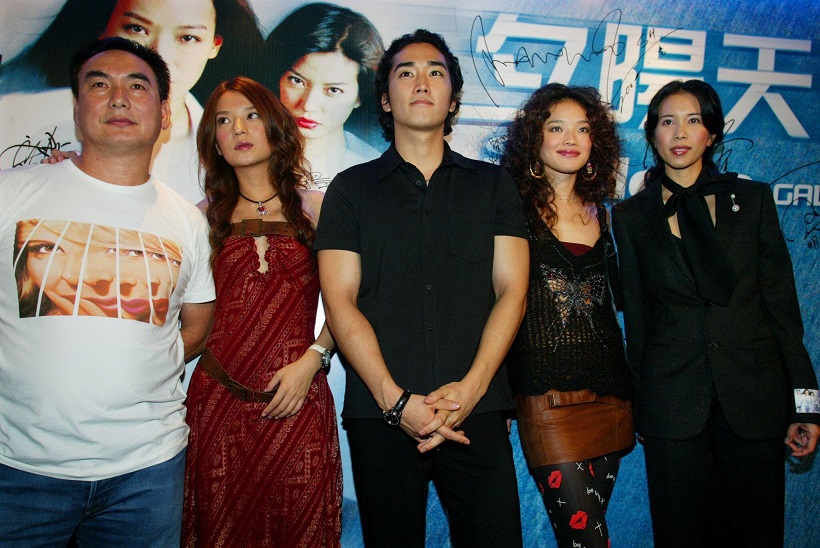 Corey reveals which gender that he prefers directing: “In shooting with women, I like to use some dance elements. When they make a pose, it has the feeling of dancing. The audience likes that – a mixture of dance and martial arts. Shu Qi plays the mature older sister, so her action style is very calm and brave. It’s almost like a family curse. Someone killed her father, so she is acting out of retribution. She only kills when she must. Otherwise, she shoots to wound. The action style of Zhao Wei reflects her role as kid sister. She’s not as brave nor calm. She tries to imitate her older sister. It’s a challenge because these actresses are newcomers to action. The three girls were comparing themselves, but it’s not like they were competing to say – Who’s prettier? Who’s thinner?”

He admits that the female protagonists are still more bloodthirsty than the racially uneven trio in the Charlie’s Angels duology: “I had the idea for this film before the first movie was made. I talked about it with Jeff Lau long ago and even now. I think this film is very different. You don’t have the three girls working together. They are fighting each other, suspicious of each other. It’s the psychology of that, along with the action, that made the film interesting to me. Ten years ago, the thought process of action movies was the end always having to be a big fight scene. This was before we thought about the story. We would think about the middle having such a scene before thinking about the beginning having to have a similar scene. Now, we think about the story first before we ponder the ending. Still, I’m always wondering how to make the action more interesting.”

Corey describes his ethos as an action film-maker: “The best action comes from the story and character development. The latter brings the action out. Even if you have very fancy and complicated moves, if there are no characters to justify it, the audience doesn’t know what you’re doing. It’s just martial arts performance. I like to see emotion in the faces when they fight, not just fighting. It’s very important to have expression in the face and in the eyes. Before I go to bed, I always turn on the TV to watch a film. I get ideas from watching the movement on TV. Sometimes I watch my own old films when I can’t sleep. I think about how I would do scenes differently. This is why I repeat myself. You walk on the street, see an advertisement and think – This is nice. I can use this sometime.”

Shu (a.k.a. Hsu Chi) lets slip as to why the movie tanked at the box office: “This was really different for me. I did some action films before but I only made some tough poses and nasty looks with my eyes. Somebody else would fight for me. A few years ago, I acted with Jackie Chan in Gorgeous. It wasn’t hard for me but I could see how hard it is for him. It shows you how truly talented stars like Michelle Yeoh are. You can get hurt and it’s completely exhausting. The action staff was very careful and serious about it. I got some bruises but I didn’t get really hurt. The toughest scene was when Karen and I fight while handcuffed together. We could only use one hand to fight, so there’s a lot of twisting and turning. I came home with more bruises than usual, but the dramatic part was tougher than the fighting.”

Karen having bragging rights explains why the movie bombed at the box office for people of an older generation: “I practiced the most because I’m the most obedient. I tend to get really worked up and stressed. When I want to do something well, I turn into a maniac. There’s one scene in there that I’m most proud of. I flip backwards and use my head to plunge through a plate of glass. That’s something which Michelle Yeoh did with Yuen on Yes, Madam! back in 1985. I felt if Michelle can do it then I can do it. This director is the best at making women look good fighting. There’s something special about women doing action. It’s really interesting that, at first, Zhao and I are antagonists then we join together. The emotion between us is somewhere between love and hate. I’m a cop, I’m supposed to chase her, but I also like her. It’s very subtle and wonderful.” 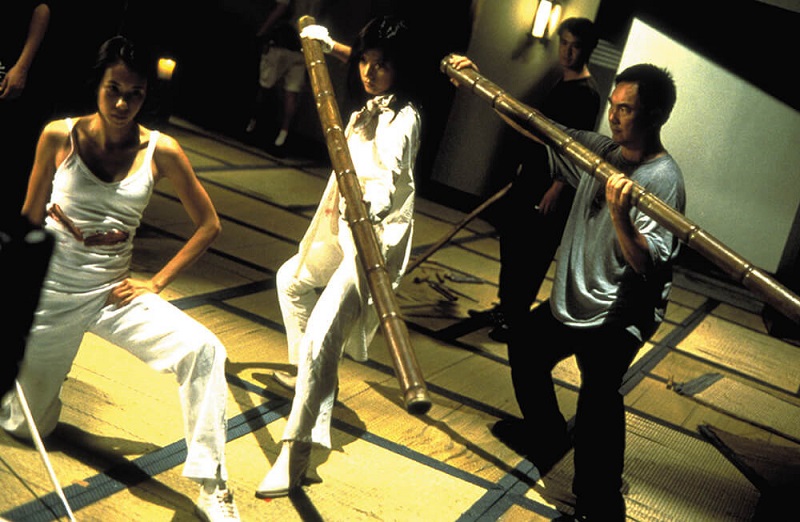 Vicki imparts wisdom that she learned from Corey and his team before imparting her improvisation: “Instead of dipping limbs in ice, you should have a hot bath after each night’s shooting. Warm ligaments enable you to move the next day. If I don’t have enough bruises, I’ll think that I didn’t fight hard enough. Bruising makes me happier. One of the scenes which I like is the one where I kiss Karen. It wasn’t in the original script. Karen and I came up with it. Yuen said – How can you have this kind of request? We told him that, during the fighting, we have a feeling of admiration for each other. Even though my feelings for her are different from her feelings for me. I was really satisfied with that. I didn’t have a boyfriend in the film, but at that moment, I felt that I had a lot of emotion to play as well.”

Here is the original DVD cover that was scrapped because it gave the illusion that it was an action comedy which featured Candy Lo. The information in this article came courtesy of a rare issue (#3) of Oriental Film Review.