The arrow in harrowing

What I like about season one of Arrow is that the series began as a combination of Kung Fu (flashbacks from the timeline that happened before the series which prove to be educative for the protagonist’s growth) and My Name is Earl (the protagonist redeems himself by going through a list). I find it to be symbolic, if not suspect, that the end of season one paved the way for The Blacklist – which satiated the demands of watching an action TV series where the protagonist has a checklist. Even though the makers of Arrow have cut down on Oliver Queen having flashbacks, we still get to see other people have flashbacks in a way that reminds me of how The Itchy & Scratchy Show used to reflect what was going on in the lives of the Simpsons. 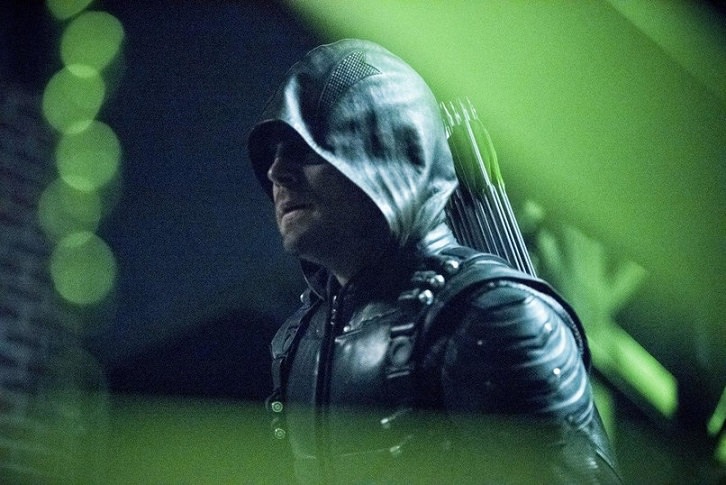 Since Oliver was on the North China island for five years, I feel that Arrow should only have lasted for five seasons like The Wire and Breaking Bad. The idea being that the final scene would be a lead-up to the first 2012 scene in the first season. This means that you would feel compelled to binge-watch after watching it in weekly increments. As for the storyline that’s become season 6, that could’ve been its own spin-off titled Triumvirate. The gimmick being that the adventures of Oliver, John & Felicity take a backseat to the misadventures of Dinah, Rene and Curtis. The Divided episode feels like it could’ve been a backdoor pilot. If the triumvirate series did happen, it would be easy for people to claim that it’s an assembly line of bottle episodes.

In other words, it would be dismissed as a cheapskate version – sort of like how Marvel fans have accused DC’s Legends of Tomorrow of being a scaled-down of The Avengers. It did, after all, begin like a stripped-down X-Men: Days of Future Past (i.e. the `70s setting). In general, it’s easy to detect a spin-off opportunity because there have been characters who have come and gone. Roy and Cindy could easily have their own series, especially now that Thea has left Star City with Roy. With the league of assassins not going to be happy when Nyssa, Thea and Roy seek out Lazarus pits to destroy, it would inevitably draw comparisons with the undeveloped Faith spin-off of Buffy the Vampire Slayer (i.e. Faith broke out of prison and has to juggle finding her safe place along with a desire to help people). One can only dream…so far. 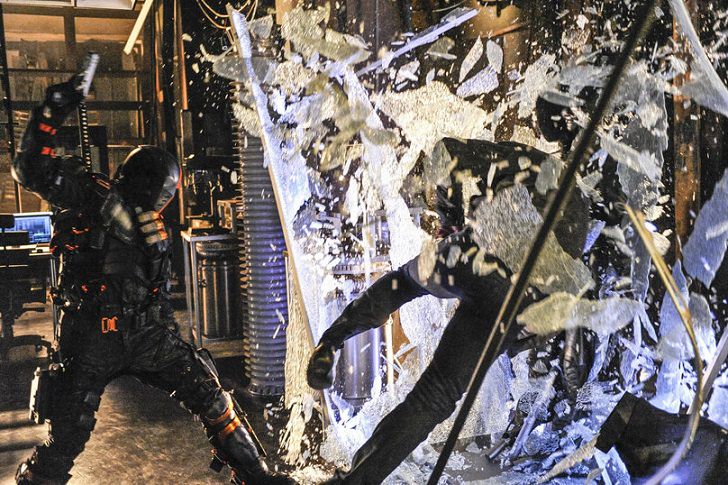 A series called League of Assassins could position Nyssa as the protagonist while the trademark flashbacks tell the story of the league’s evolution. To make it worthwhile, there would need to be exotic locations in Europe and Asia. Evelyn (who wasn’t killed for some reason) and Deathstroke (who had a grand exit) could have their own anti-heroic shows. Eve’s show would have flashbacks contrasting how she slowly became evil with her unintentionally redeeming herself in the current day, whereas Deathstroke’s series would have flashbacks of how his foes lost their way so that we strangely want them to live so as to reclaim their lost humanity.

It would seem strange to have a handful of spin-offs, but the DC franchise is three shows short of a full-week line-up. It’s not that I want to see them that badly. It’s just that the loose ends concerning Evelyn and Cindy confuse me, particularly when you consider how long that it’s been since either one has been seen, heard (i.e. phone call cameos like in Frasier) or mentioned. Another thing that bothers me is that the Constantine series would still be around if the titular character was first seen in Arrow on season 4 (the season that went from 2015 to 2016) before he had his own series aired on TV. You don’t have to be a nitpicker to realize that timing is everything. 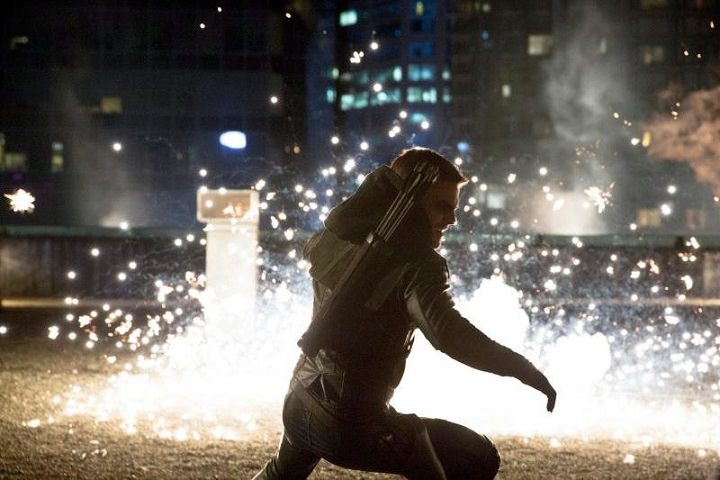 Speaking of stars aligning, there was a trend in 2016 to have TV dramas be at their darkest – NCIS, The Walking Dead, Banshee, The Flash and Arrow. After experiencing such pitch black darkness, I knew that things could only get lighter, and I was right. I sometimes wonder which Arrow writers or producers are fans of The Walking Dead. In 2016, both shows had the same mystery – whose death is mourned? In The Walking Dead, the question was who was being clubbed to death by Negan? In season 4 of Arrow, the enigma was whose grave was Ollie mourning over? Both shows had the same device of the tricky reveal by slowly revealing who was still alive.

In terms of suspense, the puzzle of who dies is scarier than who is the killer. The Arrow mystery, in particular, reminded me of One Tree Hill. The difference was that the mystery was first teased in the commercial for season 9 (the final season) rather than used as a cold open as was the case with Arrow. The scene was when we see Haley crying in a morgue after the coroner had revealed the face of a corpse. It reminds me of the tears shot in the trailer for The Magnificent Butcher. When I first saw it, I was fascinated as to who Sammo Hung’s character was supposed to be avenging when we see him holding a miniature gravestone while he’s wearing a funeral headband.

Back to the fandom that cements the connection between Arrow and The Walking Dead, some staff member was clearly fond of having an ex-castmate of the other comic book adaptation play a Negan-esque villain (nursery rhyme and baseball bat) for the beginning of season 5 that was aired in the same month as when The Walking Dead returned in its seventh season. This allowed people to see the range of Chad L. Coleman. He wasn’t the first alumni from that series to appear on Arrow. The most memorable one was Emily Kinney. It’s safe to say that Brie Larvan was named (i.e. instead of Bertram Larvan) because of Brie Larson.

Watching Arrow and The Flash back-to-back (in a way that’s reminiscent of how some people like to oscillate between Buffy the Vampire Slayer alongside Angel) makes me appreciate that the showrunners put the unity in community. Seeing Red (a season 2 episode of Arrow that isn’t a crossover episode) and Flash vs. Arrow (a season 1 episode of The Flash) have something in common which was then repeated in Legends of Yesterday (a season 4 episode of Arrow). The common denominator is a motif revolving around mothers. The small beeping sound made me theorize that the person who ends up being in the aforementioned grave is either Felicity’s mother or Ollie’s unintentional child-bearer. 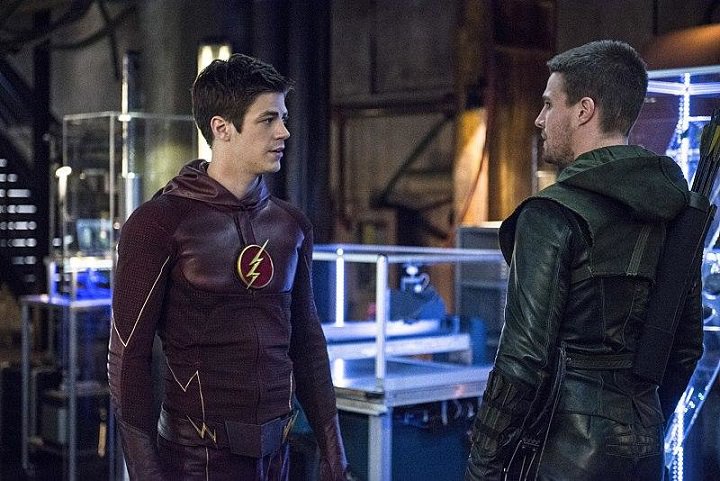 The ironic coincidence was that it turned out to be another woman. You can see why there is an attempt to get rid of the Lazarus pits, because it would be too easy to make light of a character’s death. It’s why most fans tend to prefer the first two seasons – they were more suspenseful. By the way, Paul Lazarus is a director whose name makes me think that he should have directed at least one of the Lazarus Pit episodes in Arrow. Then again, people might have assumed that it was an alias like Alan Smithee (the Chinese equivalent is Patrick Leung except it’s the real name of Leung Pak-Kin).