It’s like reading a selected filmography except this is not about Sylvester Stallone, but Jackie Chan (who visited Sly during the making of Demolition Man long after Lori Petty was fired without probable cause*). During his third American Wushu tour, Jet Li received a bouquet from Jackie backstage for his brilliant performance. Spiritual Kung Fu was actually shot back-to-back with Dragon Fist in 1978 because director Lo Wei started to think twice as to whether the former would succeed. In the English export versions of Spiritual Kung Fu, Jackie is knocked out by a neck chop. In the Cantonese version, poison makes him faint. Yuen Biao plays the masked assailant in Spiritual Kung Fu. Biao also played one of the five ghosts in Spiritual Kung Fu (as did Chiang Sheng). Dragon’s Claws (1979) was written with the intention of Jackie being the star. 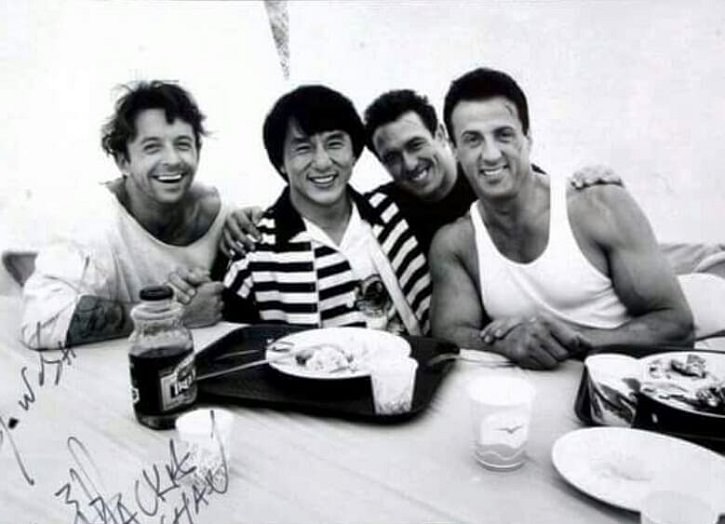 The number of swordplay films starring Pearl Cheung Ling (a.k.a. Chang Ling) which were choreographed by an uncredited Jackie can be counted on one hand – China Armed Escort (1976), My Blade, My Life (1978), Lonely Famous Sword (1980), Miraculous Flower (1981) and Wolf Devil Woman (1982). Both appeared in Fantasy Mission Force (1983). Pearl played his assistant in deleted scenes of Dragons Forever (1988). Wheels on Meals (1984) is almost uncut i.e. the uncut version shows Biao using the knife to cut himself loose so he can let loose in the finale. Remembering Jackie’s 1998 autobiography makes me realize how naïve that he was about why The Protector (1985) had a scene of nude women in a drug lab. Speaking of that movie, Danny Aiello provides insight in his autobiography titled I Only Know Who I Am When I Am Somebody Else: My Life on the Street, on the Stage, and in the Movies. 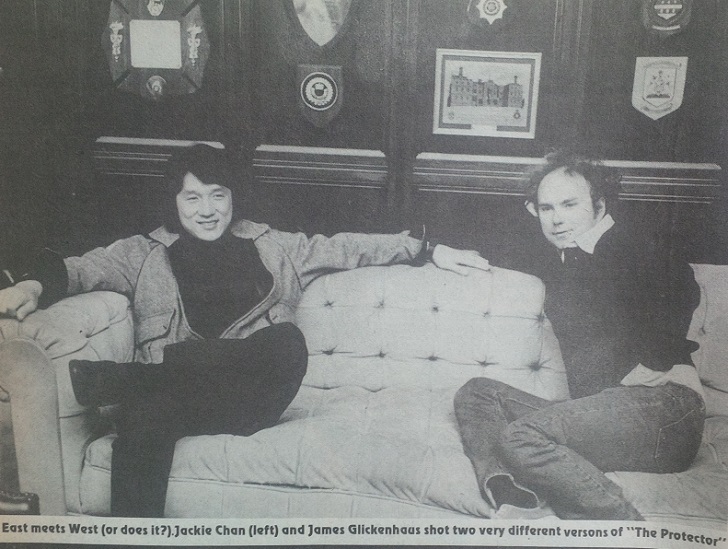 Production photos of The Protector were first seen in Issue 315 of the Milky Way magazine circa 1984. Jackie’s hairstyle in Armour of God was initially approved by Raymond Chow (the founder of Golden Harvest) as he thought that the `70s bowl was not modern for the international market. It’s often been said that Chow thought Jackie lost his power, like Samson, when he cut his hair during the making of this movie…but that should have been obvious when Battle Creek Brawl came out. Armour of God is the only Chan-directed movie to be shot in the 1.85 (full-screen) ratio (the original director was Eric Tsang). Jackie normally films in 2.35 (widescreen). In 1987, he didn’t want to do a sequel to Project A since Sammo Hung and Biao wanted to be legitimate stars in their own right. However, the Japanese Emperor requested (if not outrightly demanded) that there should be a sequel. Surprisingly, the sequel was a bigger hit. 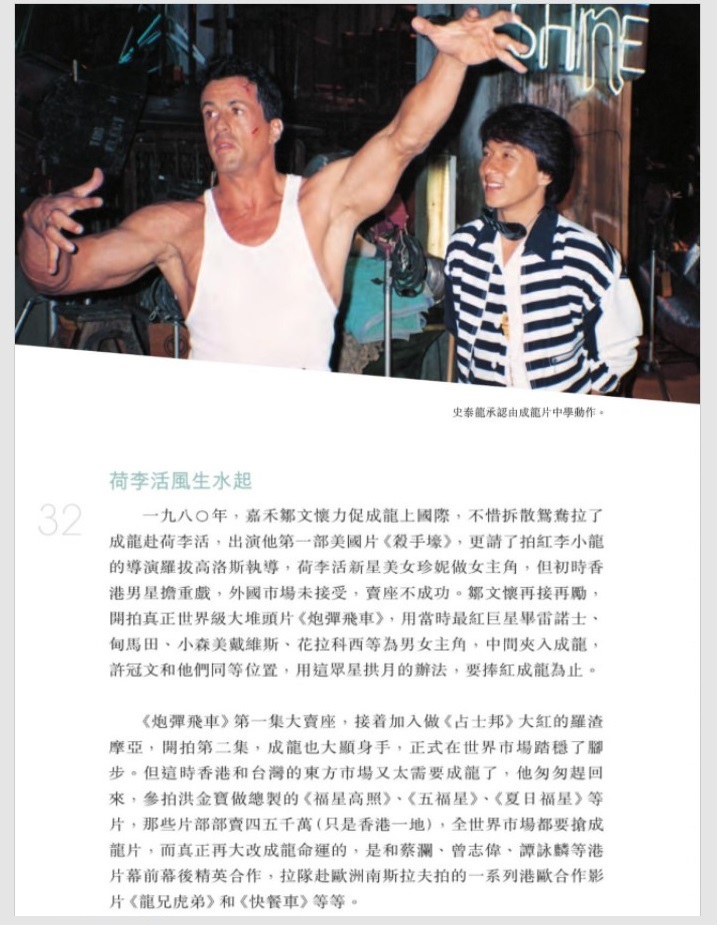 Jackie claimed that Painted Faces (1988) glamorized the hardships in his Peking Opera school. Sammo agreed that the exercises depicted were from Yu Jim-Yuen’s era. Reportedly, Farewell, My Concubine (1993) is said to be more accurate as cited by Jackie. The irony is that he rejected Leslie Cheung’s role. Painted Faces is really no less harsh than what was typed in Jeff Yang’s I Am Jackie Chan: My Life in Action (a foolish collaboration with Ric Meyers). It’s a safe bet that life was like Scum (a 1979 British film). Sammo was afraid that if he played Yu for who he really was, Yu would return to Hong Kong and kill him; yet Yu (who attended the premiere) thought that his portrayal was still too harsh. Reading between the lines, the child abuse must have been sexual (using a cane to sodomize instead of just flogging). Sammo once had a script for a sequel where he was to play Yu during his later years in America.

The roles which Conan Lee and Sheila Cheung played in Prince of the Sun (1990) were written with the purpose of Jackie acting alongside Maggie Cheung. The irony is that he would eventually do a remake of The Golden Child. It was titled The Medallion (2003), but was directed by Gordon Chan instead of Wellson Chin (once believed by some Westerners in the pre-internet era to be a pseudonym for when Jackie supposedly directs films starring others). Phoebe Cates wanted a role in Operation Condor (1991), but Jackie decided that she may not like his way of filming (i.e. no script and trailer for her). The sequel to the movie was originally going to be directed by Wilson Yip when it was announced after the dawn of the millennium. In the April 1990 issue of Combat, Jackie said: “I strongly supported the Beijing student movement and I want China to become democratic. I despise those who stuck up their fist last year, knowing full well that they were going to bolt before 1997.” 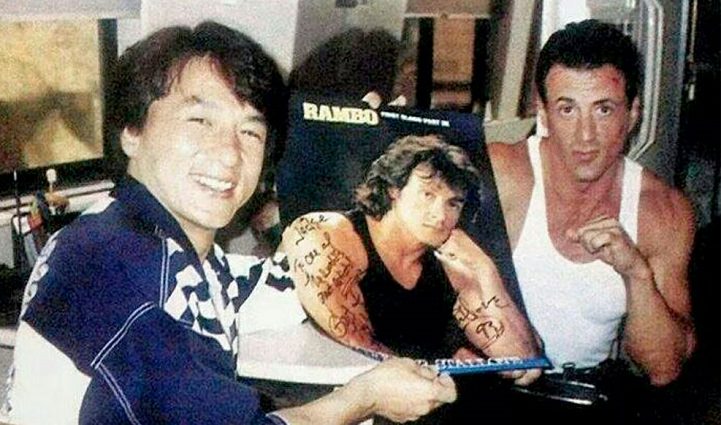 Jacke met Sly Stallone in the previous photos on May 26 in 1993 –  the same day when Cliffhanger premiered. The varied warehouse fight in Rumble in the Bronx (1994) took 20 days to film. Mr. Chan had to teach the local crew how to fight in the H.K. style. Carrie Ng had a small role in Thunderbolt (1995) which was taken out of the final cut because she later starred in an erotic film, Passion Unbounded, that came out before the release of Thunderbolt. Jackie had already acted in movies with actresses who did naughty things, so Gordon should’ve left her in. Initially, Shanghai Knights was to be a darker action comedy where the duo played by Owen Wilson and Jackie were to confront Jack the Ripper. This meant that the title would have to be Shanghai Dusk yet the producers wanted to have a decidedly British title. As a result, the title was changed along with the story. Jack was reduced to a cameo. 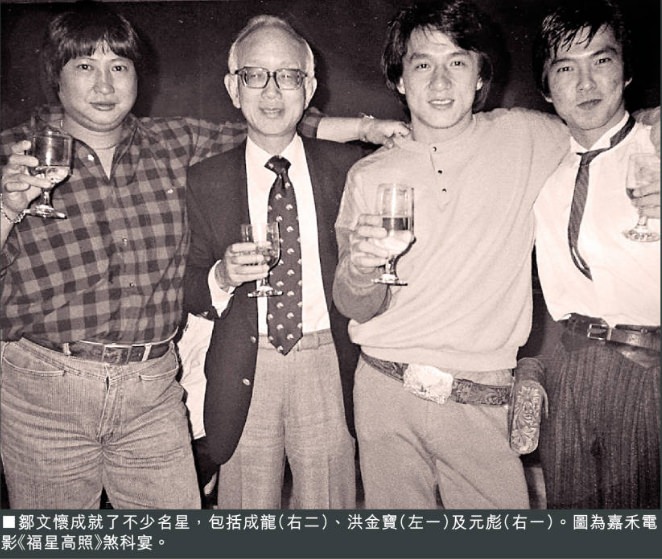 In Mr. Nice Guy (1997), Jackie’s skirmish with Gary Shambrooke in Giancarlo’s mansion was removed because of a nude painting. Gary (the thug who can be seen below) was nicknamed “Gwah-Sow-Gary” by the Chinese crew members (amongst other names like RoboCop) when they saw him perform authentic Buck Sing styles (of Choy Lay Fut) that are rarely known outside China. When talking about Mr. Nice Guy, he said: “I only did it because of the martial arts. I have done heaps of extra work and a fight scene on Hey Hey It’s Saturday. I just wanted to see what it was like on the sets. They make the story up as they go – they just tell you what to do and you have to do it. You don’t pull any punches; it’s all for real. They make you do it and do it until you’re all hyped up then you do it for real. Jackie really hits me with a chair. There was one scene that was taken out, I was beating up Gabrielle Fitzpatrick. I think it was too violent.” 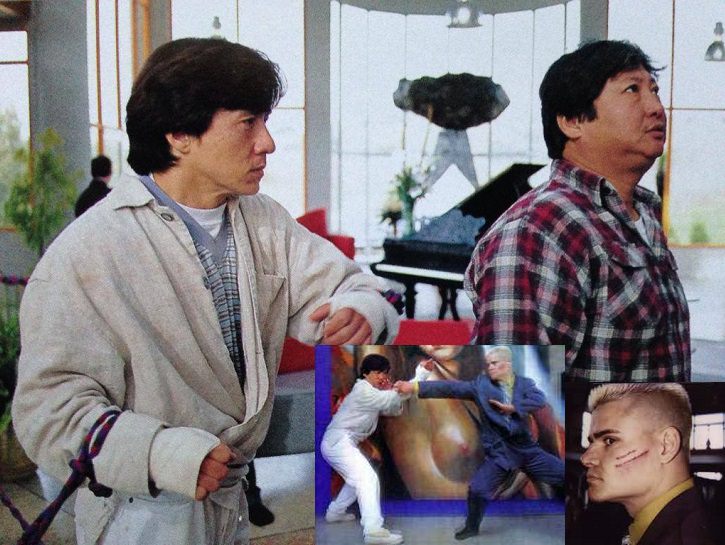 Awarded a part in the movie after showing Jackie and his team his prowess, Gary was asked to bleach his normally brown hair white. They saw an opportunity to remind people of Dolph Lundgren in Rocky IV. Doing his own stunts throughout the movie left Gary with stitches in his leg after jumping through a window, but earned him the respect of the rest of the crew: “A lot of the Chinese did the stunts instead of the Australians because they were scared of the Australian guys hurting themselves. But I did my own stunts, I didn’t have any doubles. I had to eat about four chillis and I couldn’t eat for a week. I couldn’t sleep either.”

Brett Ratner (franchise vandalist) referenced Mr. Nice Guy in Rush Hour (1998) by having Jackie accidentally touch the female detective’s breasts. Considering that Eddie Murphy rejected the chance to co-star in Rush Hour (sidekick status), Bowfinger seems suspiciously mean-spirited towards Jackie. The director, Frank Oz, said that the finale was inspired by the Z-grade Godfrey Ho ninja movies. If the 9/11 terrorism hadn’t happened, Jackie’s Nosebleed (no script finalized nor footage filmed) would’ve been hailed as a mixture between Game of Death and Die Hard (slightly foreshadowing The Raid). Since Jackie and Steven Seagal are friends, Steven was offered the main villain role for Rush Hour 3 (2007) but unfortunately rejected it.

* Jeffrey Boam claimed that the only reason why Teri Hatcher was cast in Stallone’s Tango & Cash was because she was the girlfriend of a producer who he previously worked for on Innerspace – Jon Peters, who was probably responsible for casting her in Lois & Clark: The New Adventures of Superman. When Warner Brothers produced that series in 1993, Jon was working with them on putting together a Superman movie. Back to Tango & Cash, 1989 was when Teri divorced her husband – Marcus Leithold. Peter MacDonald, one of the executive producers, talked about Daphne Ashbrook no longer going to play Sly’s sister: “I had to reshoot the dance sequence with Teri because they had employed another actress, and then decided it hadn’t worked out.”