The Chinese title is Scream, but the English title inspired the name of an Indonesian thrash metal band. Jude Poyer should seriously write a book about Hong Kong movies. There aren’t too many Western martial artists in H.K. cinema who go out of their way to write articles. He attended London’s elite Emanuel School. In 2001, he wrote an article for his website. This is what Jude had to say about the movie that starred Sam Lee and Jerry Lamb but hardly made a dent at the box office…

One of the movies that I most enjoyed making so far is Scaremonger. Why? Is it a good movie? Not really! The call to do the film came out of the blue. I was shopping in Temple Street when Aman Cheung called. Was I free these coming few weeks to play a fighting spirit in a new ghost movie he was directing? Sure I was. I worked for him twice before; on Fist Power and Twilight Garden. I like him because even though his budgets and schedules are usually extremely tight, he always remains calm and methodical, thus putting his actors at ease. 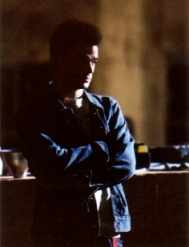 Much more famous directors on much larger films are sometimes known for their fiery tempers and impatience. Aman seems to realise that, to get the best out of his crew, he should give them confidence and make them feel comfortable. Another thing that I appreciate about Aman – and Scaremonger bears this out – is that he doesn’t mind casting a gwailo in parts which don’t demand a Caucasian performer. So much in the film business depends on opportunity. Aman has been good enough to give me some.

One reason why I enjoy the process of making smaller pictures over larger ones is the sense of family that develops amongst the cast and crew. For the three Aman films that I’ve done, there’s been the same production manager, assistant director, cameraman, stunt coordinator and common cast members as well. There are of course advantages with this approach. Time is often saved communicating because everyone understands everybody’s short hand, and has a better understanding of what’s wanted of them than a stranger could. Our cameraman, or should I say Director of Photography, Choi Sung-Fai is a remarkably talented fellow. I suspect that it’s largely down to him that the movies never look any way near as cheap and rushed as they were. Ah-Fai was the 2nd-Unit DP for Crouching Tiger, Hidden Dragon – meaning he shot the bulk of the film’s action scenes. 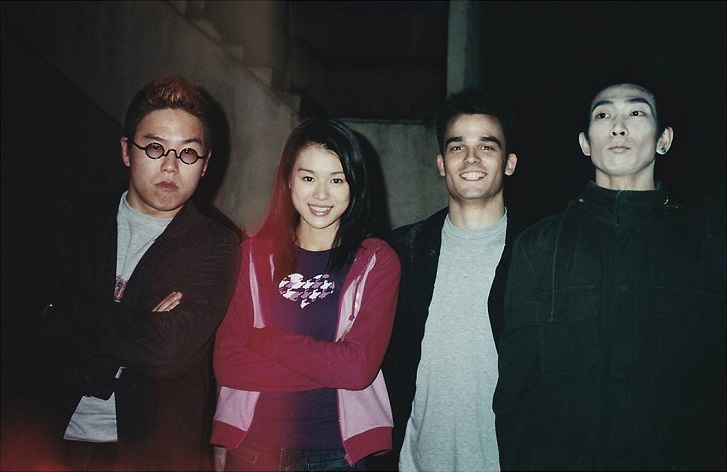 Aman comes from an editing background, which means much of the film is pre-cut in his head. So Ah-Fai tends to only shoot what’s needed. Very little footage, time or money is wasted on coverage. Low-budget shoots are demanding for all involved. Scaremonger was shot in 7 days, but that’s not to say that they aren’t fun when working with good people. I turned up for my first day of shooting at an apartment in Prince Edward and immediately bumped into Jerry Lam Hui- Fung. We previously worked on A Man Called Hero in China (two years previously) and on TV before that, so no time was wasted getting to know each other. Before we know it, I’m in bed with him! My character, a little spirit child, has become fully grown but still has infantile behaviour. It’s ridiculous, I know, but how else would you justify myself crawling into an unsuspecting Jerry’s bed, and grabbing his breast, if I wasn’t after a feed? Jerry and I remain close for the next scene. 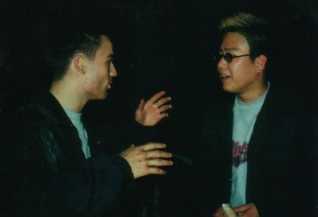 He’s sat on the sofa, with my 145 lbs on his lap while I dig into some Häagen-Dazs. It sounds kinky when I write it, but it was meant to be cute. As the camera rolled, I couldn’t help letting my mischievous character mess with Lam, so I improvised. I’m not sure whether Jerry liked me feeding him ice cream while he tried to deliver dialogue to Sam Lee and Myolie Wu, but the effect was good……so it stayed in the movie. We shot at that flat through the night. At around 8 in the morning, action director Ma Yuk-Sing turned up with two assistants. At 10, Jerry and I fought for two hours. At 12, I was allowed to go home while the crew continued working. I was expected back on the set in 7 hours for another shift. Did Aman and Ah-Fai sleep? 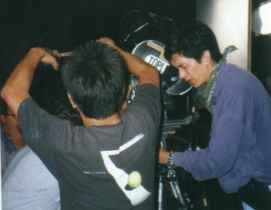 Ma, although the film’s credited action director, actually only choreographed that fight between Jerry and I. We battle it out in and around the apartment’s dining table. I’m running along walls and chopping at Jerry with a meat cleaver. Ma is famous for being the fastest in the business – he puts together his choreography and shoots it with no pauses for breath. Jerry, always the funny man, took to doing impressions of Ma’s lisping direction: “Ok, Get Ready…Action!” (often said before the performers are even in position). Ma has done 21 films with Ching Siu-Tung. His work on Bichunmoo (a Korean film) proved he can do wires as good as anyone. He’s better known for his more rough and tumble style though. As we shot our fight, Ma would occassionaly man the light Arriflex camera himself. Ah-Fai was in no way offended. In Hollywood, unions and egos wouldn’t allow such behaviour. In Hong Kong’s low-budget terrain, everyone’s just concerned with getting the shot in the can.

Apart from the flat, the other location where I worked was a disused gasworks (I think) in the New Territories. It’s a favourite (free) location, and I’d already shot scenes there before for Honey, I Love You. The floors were littered with small plastic balls, since weekend wargamers had taken to staging their military manouvers there. I’d heard the story of one unfortunate wannabe G.I. Joe who’d fallen through a hole, in one of the floors, to his death. His ghost was supposed to still haunt the place. I don’t know if it’s true, but it’s a good story when shooting a horror film all the same. The scenes that we shot involved myself rescuing Jerry, Sam and Myolie from evil Angela Tong being accompanied by her zombie lover. 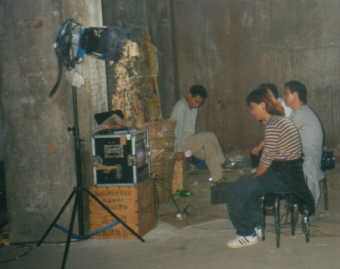 The film’s producer, Bee Chan (a.k.a. Billy Chan Wui-Ngui or Ah Bee), directed those scenes. He was a veteran stuntman who was in most of Bruce Lee’s Kung Fu movies. Fighting Angela was interesting. She’s no screen fighter, but was happy to get stuck in and had no complaints. One shot had her swinging a dagger at my face. With it being a side shot, it was impossible to cheat the distance between the blade and its target. As Ms. Tong kept being encouraged to swing closer and closer, I couldn’t help wishing someone had bothered to make a rubber dummy dagger.

Wirework for the film was extremely simple. One placement in the ceiling and one in a far wall were reused for all the different wire actions – bodies dragging along the floor, flying kicks as well as “Matrix” poses. Due to the bargain basement budget, the film was not edited on computer with wire-removal software, so retakes were often required with lighting adjustments to “hide” the wires. In the finished film, you can see the cables clearly. Oh, well. 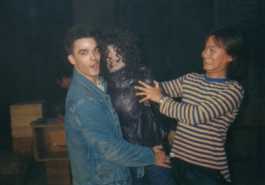 The only stunt double who I saw employed on the film was an inflatable sex doll which got thrown, thrashed and dragged all over the place. One shot required Tong’s character to fly through the air (as if thrown by me). Off camera, I lobbed the dressed up doll. It didn’t perform. Aman gave it a few goes. No luck. Then one of the stuntmen had a go. No better. Then Aman again. My friend, Art Black (an American film critic), was visiting the set. He watched these proceedings with a perplexed expression then he asked: “Does everyone get a turn?”