About the cover, the man in the top right (or what I call the North East position) is Stephen Chow. The man in the bottom right (or the South East position) is Charles Heung. The bespectacled man is Jimmy Heung – he looks like what if Simon Mayo was Chinese. These Heung brothers are connected to a criminal organization called Sun Yee On. The cover photos were taken in 1992 when Wong Jing (the bespectacled director in the far right of the below photo) was directing Jackie’s City Hunter and Royal Tramp i.e. hence Sharla Cheung Man (the lady in blue) and Brigitte Lin (who always looks best in white). It’s often said that Jimmy was the only Heung brother to be involved in organized crime, but Charles was identified as a top-ranking council member in 1992 (as investigated by the U.S. Senate’s Permanent Subcommittee of Investigations), 1994 (as testified in a Brooklyn Federal Court) and 1995 (as notified by the Royal Commission for Canada). As for why I have singled out Stephen over the other stars in the photo, Stephen failed to immigrate to Canada (as documented here) because he was only guilty by association. The association being that he was employed as an actor for a Heung film company called Win’s Movie Production. 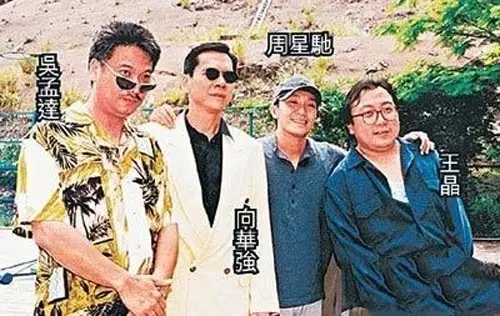 They had another company which he was involved in – Samico. Besides wanting to immigrate to Canada because of the handover of Hong Kong to Mainland China, like so many other Chinese, he wanted to work there since Jim Carrey wanted Stephen to direct him in a remake of the latter’s The God of Cookery. Apple Daily (not to be confused with New York or technology) reported in late January of 1998 that Stephen had filed for an appeal after his application was rejected. His lawyer, Barbara Jackman, pointed out that the official didn’t have enough evidence to prove that he was an underworld underling. It makes me wonder what would happen if Wong Jing had tried to apply for a Canadian immigration. On January 16, the court held a closed door meeting on the case which Stephen and Barbara were not privy to. Five days later, they participated in a public hearing in H.K. where the Canadian official, Jean-Paul Delisle, was criticized by Barbara for having holes of logic in his ruling.

According to Jackman, among the 46 movies which Stephen participated in before 1996, only 14 were produced by Win’s while one of them was produced by Samico (or Sam Wo as was mentioned in the article). This one movie was God of Gamblers III: Back to Shanghai. Samico were credited as a filming company for Win’s Fight Back to School II (1992). When Stephen was working for Win’s and Samico, his management company was Hong Kong’s TVB (who produced his first two movies albeit TV movies). His contract with any film company had to be approved by TVB, which proved that he isn’t a Heung puppet. Barbara acknowledged that Delisle believed that Stephen had met another Triad figure – Wong Cheung-Ying (the man who not only ran Samico but was credited as the presenter of a 1989 Andy Lau movie titled Proud and Confident). When Delisle met with Stephen, the former asked if he knew Wong. Stephen had never heard of that name. Delisle addressed the fact that Wong goes by another name – Wong Chun. Stephen was still clueless. 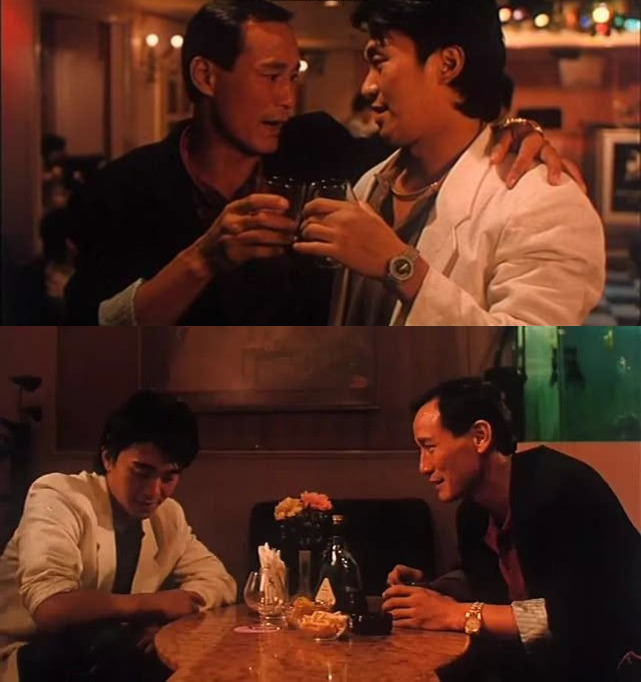 Apparently, they only had one meal together but didn’t have any other meetings. Wong’s nickname was Tiger of Tsim Sha Tsui East (as well as Tiger Among Tigers), but it didn’t matter since he died in a car crash within Thailand circa October of 1995. Although she didn’t know the content of the evidence handed over by the immigration department, Barbara still defended her client with vigour. She requested the court to treat the secret evidence in the closed door hearing with the usual standard for evidence in order to maintain the judicial spirit. After the hearing, she criticized the unfairness shown by the immigration department to Stephen in handing evidence over in a closed door hearing. She pointed out, without knowing the content of the evidence, that he could not react and respond, thus making her defense more difficult. At this point, I should mention that Jet Li’s first manager worked for the Sun Yee On. 14K are just as nefarious as any other Triad, but Michael Chan Wai-Man (seen above) is said to be a good man. 14K and Sun Yee On are rivals.

Before he was murdered, Jim Choi Chi-Ming was actually Jet’s second manager. His previous manager was the son of Lo Wei – the Bruce Lee director who worked for the Sun Yee On. The son was responsible for bringing Jet over from the Mainland so that he could be a H.K. movie star. He also arranged for Jet to obtain a U.S. Visa. This allowed Jet to star in a film produced by Lo’s production company – Grand March Movie Production. Yes, I’m referring to Dragon Fight (1989). The relevance is that Stephen was the co-star. Despite all of this, Jet fired Lo’s son after the success of Once Upon a Time in China II. Lo’s son was about to take him to court when the bosses of Sun Yee On had reached a settlement with him. Following Jim’s murder, they (under the illusion of Win’s) became Jet’s new management. In others, Jet had the sort of protection that Bruce should really have fortified himself with. Back to Stephen, who is a Lee fan, I would like to direct your attention to a 1996 issue of a Vancouver newspaper which addressed his immigration failure. 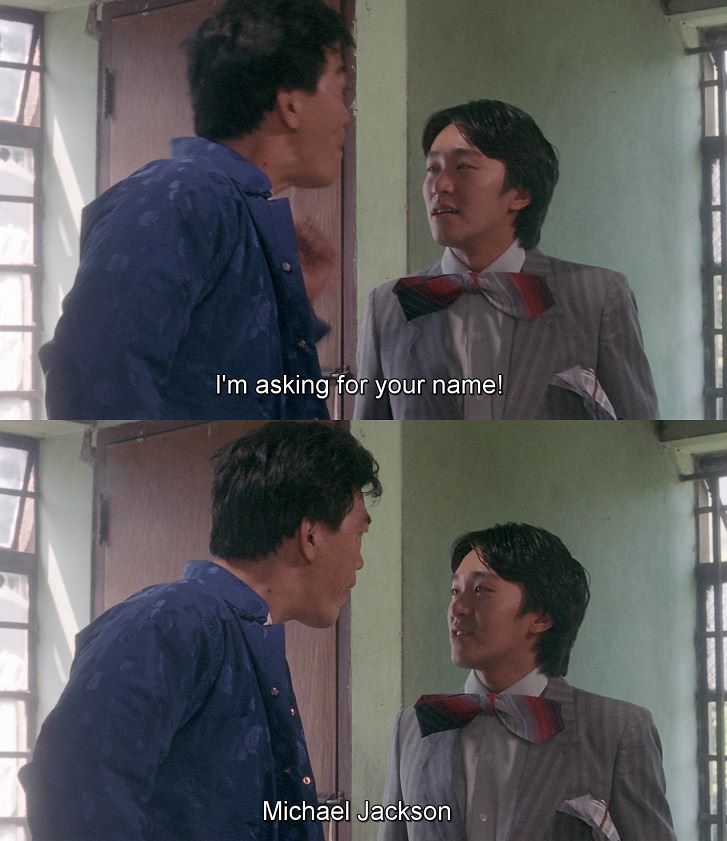 In February of 1998, it was reported that he had actually filed for immigration to Canada as far back as 1993. Coincidentally, 1993 was the year when Win’s Movie Production seemingly changed its name to Win’s Movie Production Limited. However, they both have different pages on the Hong Kong Movie Database. The first company’s last film (Wong Jing’s Last Hero in China) finished its theatrical run in April whereas the second company’s first film (Stephen’s Flirting Scholar) started its theatrical run in July. After February of 1993, Stephen claimed that the reason why he appealed was to maintain his image in the H.K. film industry. Despite being rejected again in 1995, the judge expressed that Stephen could appeal again. This would suggest that all Stephen had to do was to stop working for any Win’s company. Starting in 1994, the Heungs had another company called Win’s Entertainment. This resulted in Stephen starring in Jing’s Sixty Million Dollar Man (1995) and Forbidden City Cop (1996). Like Jet, he should’ve applied for a U.S. Visa.

Ng Man-Tat (seen in the first photo on the far left) is not a gangster but he has shown to be adroit at playing one. This comes from his experience of dealing with Triads. When he was younger, he was a heavy drinker and gambler. He also spent his time with many women. In 1980, when he was 28 years old, he owed 300,000 H.K.$ in gambling debts. Things got so bad that he wanted to commit suicide. Thank God that he didn’t do that, because where would Stephen be without his regular on-screen sidekick? In 1996, Stephen finally broke away from the Win’s brand. He was originally meant to be play Sing in a Derek Yee film (Stephen sometimes plays characters with this name because his Cantonese name is Chow Sing-Chi). Those in-the-know will know that I am referring to the character that Leslie Cheung played in Viva Erotica. Besides the fact that it was going to have a Category III rating, he told the press that he had quit the role because he wanted to be a director instead of playing one. He chose to concentrate on his own film project – The God of Cookery. 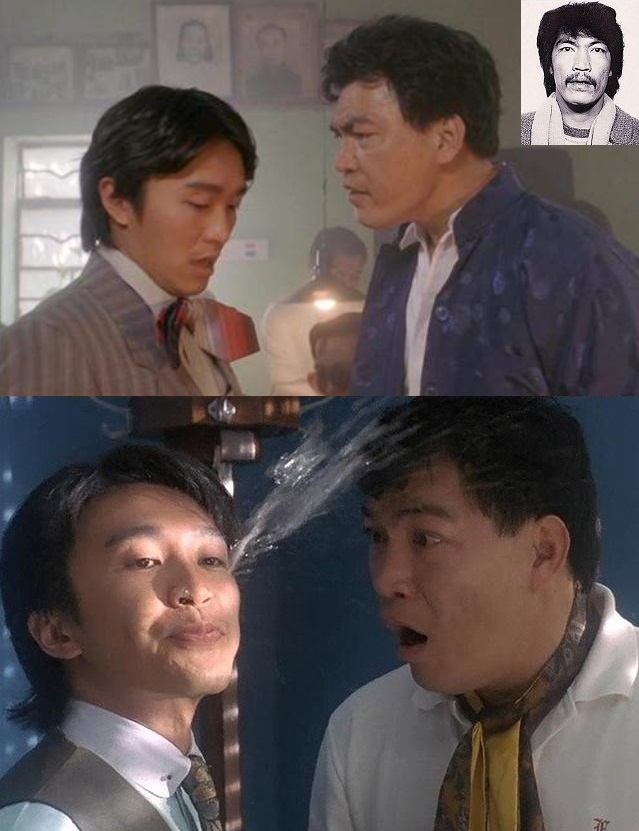 On January 7 in 1998, it was reported that Yuen Woo-Ping’s appeal for Canadian immigration was rejected too. He filed for an appeal that was also rejected. He applied with self-employment status, and planned to produce films there. He had worked in Vancouver for the opening reel of In the Line of Duty 4 (1989). Also, Hollywood likes to make films in Canada because of tax benefits. Therefore, he literally had a demo reel. After the officials reviewed his commercial plans, they rejected his application. The officials pointed out that his commercial plans were too narrow. They didn’t know about what The Matrix was going to end up being. Still, the taste for movies in Canada and H.K. was said to be different enough that he could not survive in self-employment. Although his lawyer attempted to appeal by citing that the interview was too short, the appeal was rejected. If it wasn’t for being hired to work on The Matrix (or Live Wire as it was originally known as before the movie was done), he would’ve ended up focusing on on making martial arts TV shows in Malaysia.

Shing Fui-On is the man who Chow is seen with above (I included his mug shot). When Shing was a child, he felt that he had a problem with his brain, so people called him Big Silly Head – a name that would be immortalized in Chase a Fortune (1985). In the early days of his movie career, he had worked as a prop master for the Shaw Brothers movie studio. He also once worked as a thug. He was sentenced to 4 years in prison for slashing people, and his sentence was reduced to 2 years and 8 months. Now you know why he didn’t do anything on camera between 1975 and 1981. His career picked up a bit more steam when he befriended Danny Lee in 1983. Danny always wanted to be a policeman but the salary was lower than that of an actor, so he compensated by playing policemen. As such, he could vouch for Shing’s character, especially when Shing became a bodyguard for the threatened and blackmailed Andy Lau. 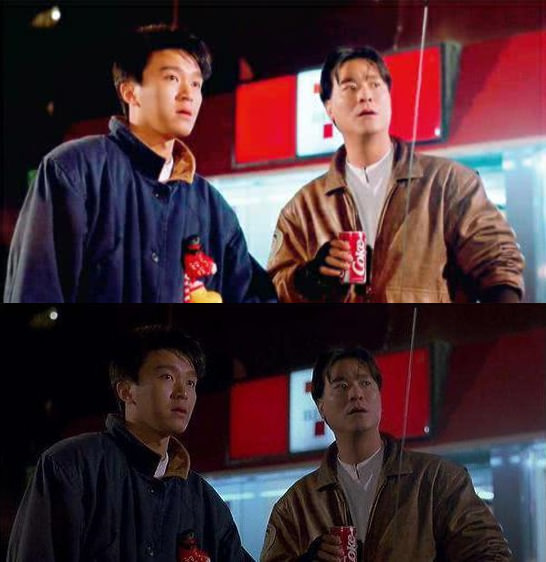 Danny and Shing have been in 34 movies together. Shing knows more than anyone that Danny was responsible for people taking Stephen seriously as a film actor after he was heavily typecast as a children’s TV show presenter. After all, Shing was in four of their five movies (three of which involved Danny acting instead of producing or directing). So you can imagine how dissatisfied that he was with Stephen disrespecting Danny by having his own character in Mad Monk (1993) slightly named after him (compare the Chinese characters on the Chinese version of HKMDB): “He was nothing at the time. No one knew him. It was my teacher who brought him in. Now he is red hot, he ignores the teacher. He also mocked Lee by having his character in Mad Monk be insulted wtih someone saying – Li Xiuyuan, I will kill your whole family! If Chow truly respects the teacher, he will discuss with the director to change the name of the character. Chow is too ruthless; I hope he will not forget this.”