Predator is a perfect example of how to reconstruct a movie in order to deduct expenses as much as possible. The cast and crew have given inconsistent stories as to why Jean-Claude Van Damme was fired, because of secrecy agreements. Even JCVD has resorted to telling variables of the truth. First of all, he told Starlog magazine (#138) that he was swindled about what the alien was to look like (a supposedly half-human face). He was hoodwinked into thinking that he would showcase his martial arts ability. It makes sense – if an alien can punch then why can’t it kick? It’s troubling to believe that the film-makers would cast the Belgian buns without realizing that he would be smaller than Arnold Schwarzenegger (Robert Patrick was smaller in Terminator 2). It’s unrealistic that J-C would complain about the visage of the post-production costume after getting into it instead of beforehand. 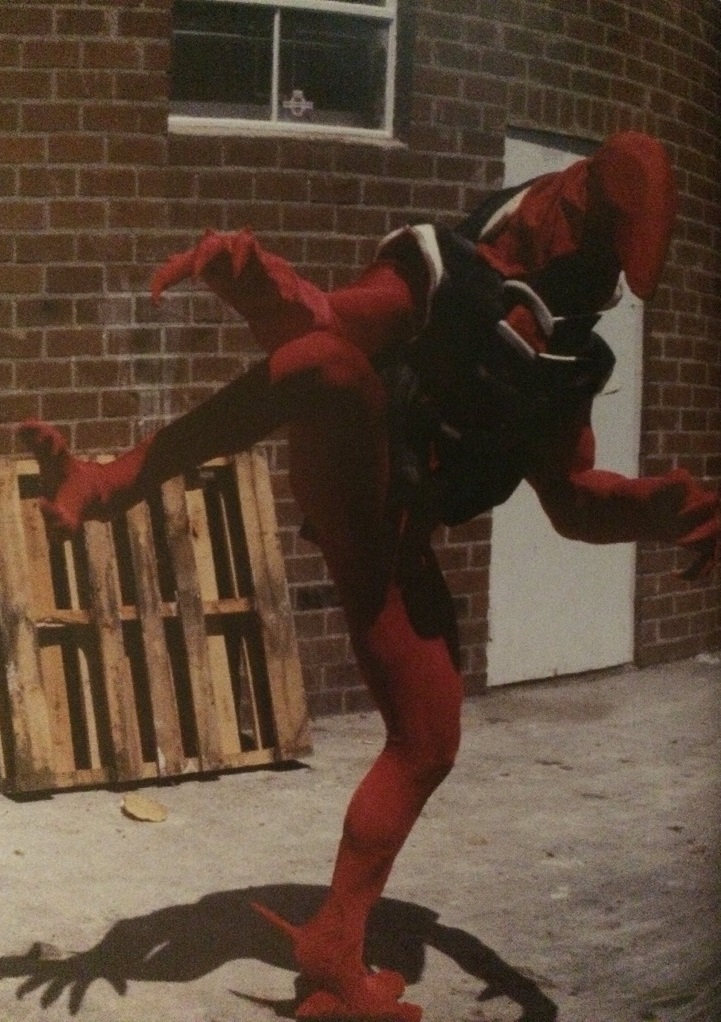 Last of all, he warned the film-makers that doing a high fall in the costume would result in a broken leg or two. Another man did the stunt. J-C was proven right. The stuntman was literally the fall guy. His injury provided a cover story as to why production had to be shut down, but Jean was still blamed because they needed a scapegoat to divert attention from two details. Firstly, the studio’s scheduling prevented the director from wanting to delay so that a make-up maestro could be hired (Stan Winston). Secondly, Kevin Peter Hall was always the titular tyrant in the eyes of the proficient producers because of his role in Without Warning. The problem was that he was too busy being in a TV series that he co-leaded (Misfits of Science with Courteney Cox). The stunt coordinator, Craig R. Baxley, had already worked on a TV series (i.e. The A-Team) where someone (i.e. Tim Dunigan) was deliberately miscast because the original actor (i.e. Dirk Benedict) was unavailable. 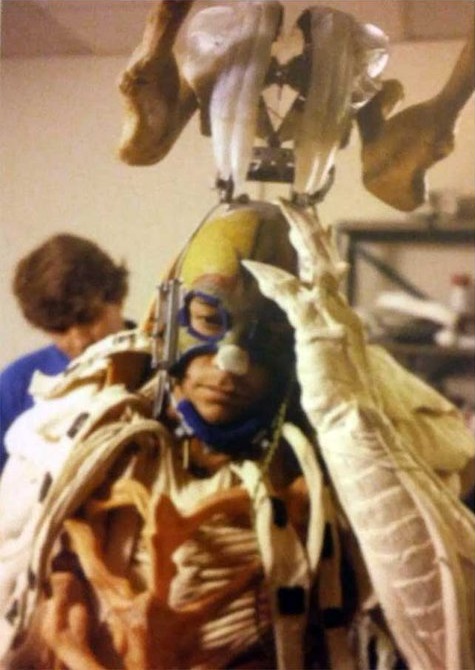 Having Hunter be retitled as Predator allowed the studio to convince tax creditors that they shut down in a way that wasn’t meant to be tax relief, especially since the original plot was about investigating a series of skinnings. In Robert J. Emery’s The Directors: Take Two, a 2000 book, director John McTiernan was interviewed. The book series is actually based on a documentary series, so the book’s content isn’t entirely new but it contains info that isn’t widely circulated. One such example is the issue of JCVD in Predator. John said: “Jean-Claude Van Damme had just come to Hollywood and was represented by the William Morris Agency. They came to me and asked if he could play the monster. So Jean-Claude came down to Mexico and they sent him off with the special effects guys who fitted him out with a red suit. Jean-Claude came out and he was so angry that this string of obscenities came out of him. You couldn’t get a word out of him that wasn’t f#ck or sh!t.”

John explained how the movie business can be monkey business: “I think that lasted maybe about a day before we all realized that this wasn’t really Jean-Claude’s big break in the movies and that this probably shouldn’t be his first film. You see, he had been told that it was a significant part and then he discovered that he was basically a technical. We also at one point tried to dress up a monkey in a red suit so I could get pictures of a creature jumping through the trees. The monkey wouldn’t keep the suit on.” 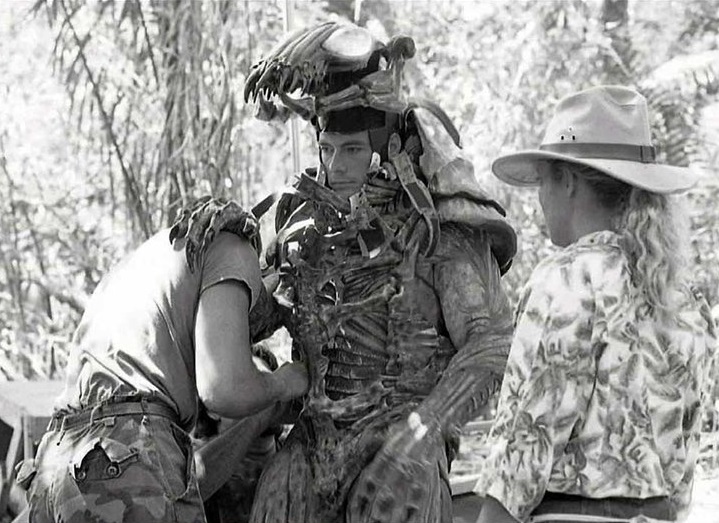 Predator began filming on April 14 in 1986. In behind-the-scenes footage of JCVD’s hunter pulling Shane Black’s Hawkins character, the clapperboard revealed that JCVD was still around on April 28. Bearing in mind that the movie wasn’t filmed in chronological order. For example, the scene where Dutch and his team kill the guerrillas was filmed after 48 days of principal photography. According to Craig Baxley, producer Joel Silver told John to rewrite the palapa scene (instead of reshoot it) because it hadn’t been filmed yet. The production schedule was 56 days, and the studio was threatening to shut down production unless there was a major action scene. John wasn’t happy with the movie coming off as a war movie, which suggests that his original vision had more in common with Alien (Sci-Fi suspense) than Aliens (all-out warfare). The original director, Geoff Murphy, would have preferred Harrison Ford to Arnold.

Speaking of the latter, Arnold’s 2012 autobiography (Total Recall) implied that JCVD had already filmed the climax. He also implied that the movie was more or less in the can, which makes sense because the American Film Institute site mentioned that production had been shut down after six weeks then picked up many months later where the only new footage filmed was the final confrontation and shots of the new alien. Anyway, Arnie’s quote was: “Nobody realized that the creature footage couldn’t be fixed until we were all back from Mexico and the film was in the editing room. Finally, the producers decided to hire Stan Winston to do a redesign and rearranged to send us back down to Palenque to reshoot the climactic confrontation.” 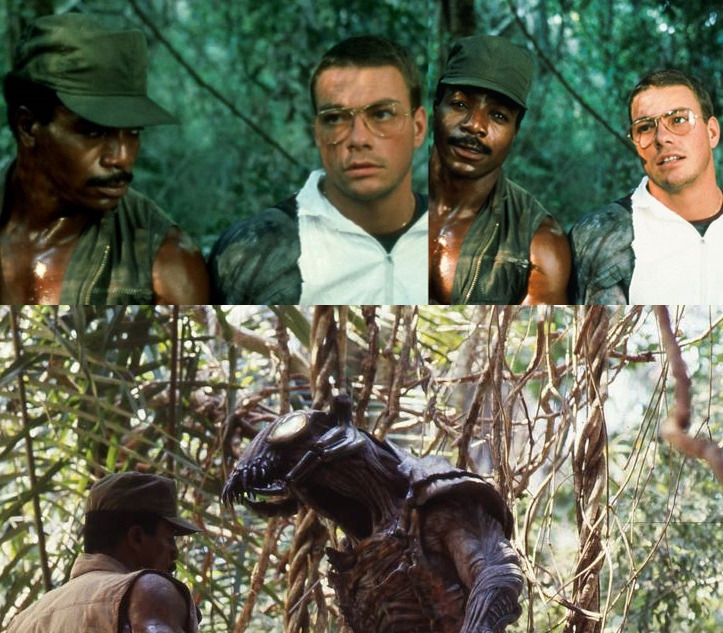 In Hollywood Reporter’s oral history report of the movie, 90% was given as an estimate as to how much was filmed prior to the shutdown. Back to JCVD, I suspect that he was duped into doing Predator because the casting director, Jackie Burch, was getting sick of him always pestering her for work. He was such a pest that he even stored his furniture in her garage. She didn’t have a misgiving about later being the casting director of Nowhere to Run (1993). Back to Predator, he can still be seen in the final product since the camouflage effect disguised the original costume. It’s his hunter who drags a dead Hawkins. Ironically, McTiernan tried to deny this earlier this year so that JCVD wouldn’t be paid any residuals: “We never shot anything with him. It was a complete screw-up with his agent, trying to hustle him into a job and didn’t know what the movie was. It’s silly. It was really silly.”