That scene in Casino

I got the cover from the Twitter account of Heidi Harris, who is a Las Vegas journalist. Martin Scorsese’s Casino is one of the most harrowing films of all time, mostly because of a scene that takes place in the final reel. Part of what makes the scene powerful is that the film, for the most part, is a glamorous depiction of crime with a ebullient tone despite the many scenes of swearing and violence. The film has often been described as a parody version of Scorsese’s Goodfellas. I feel that there are some scenes which could be almost seen as comedic such as the desert confrontation between Robert De Niro and Joe Pesci. Even the cornfield scene with the baseball bats could be seen as darkly comedic to some extent. The actor who plays Frank Marino (i.e. Frank Vincent) had played Billy Batts in Goodfellas. Halfway through the bludgeoning scene, he uses two bats simultaneously as his main victim is being dragged away. Near the beginning of the scene, a character’s narration is interrupted as he is hit in the back. 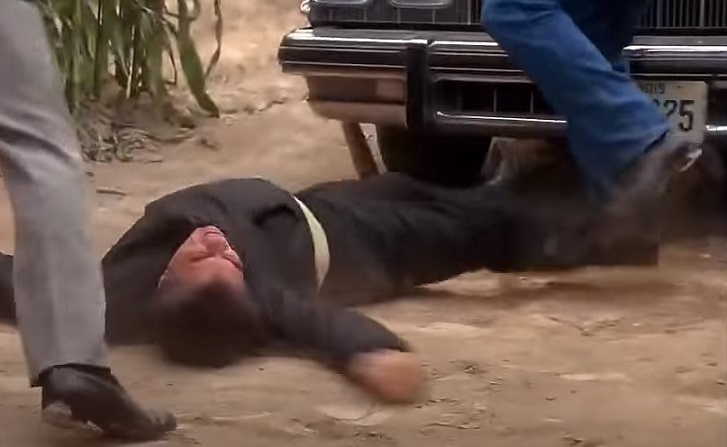 One thing that doesn’t get mentioned by critics, fans and miscellaneous observers is that one of the bats is next to the top right wheel of the opposite car. I feel sorry for Ken Diaz, who did the prosthetics for both Joe Pesci as Nicky Santoro and Philip Suriano as Dominick Santoro. All that hard work that he put into it didn’t get to be seen in its full gory glory. If you go to his IMDB page, you will see that there’s a significant difference between the way that Dom looked before and after his face was covered in blood. It’s kind of ironic that the MPAA (i.e. Motion Picture Association of America) were more lenient with the head-in-the-vice scene. In fact, Scorsese only filmed that scene so that the MPAA would see the cornfield scene as less violent. It’s more ironic that the original version of the film hasn’t been released on DVD or Blu-ray, especially since Scorsese claimed that he didn’t want to quickly gloss over the deaths of characters who were based on real-life brothers. He told Roger Ebert: “We could have made short shrift of their deaths, but I didn’t feel we should have. I think it was terrible, and sad.”

Many people are convinced that the bats scene couldn’t possibly be more unnerving, but I disagree. It would have been unsettling if Dominick was depicted as becoming mentally disabled after being bludgeoned by the bats. Because the film deliberately offers conflicting views of narration from several characters, it could be argued that it was a character flaw (rather than a writer’s flaw) that the Santoro brothers are referred to as having been buried alive. If you watch their final shot together, it’s clearly Nicky who is still breathing and moving. Many people online have noted that Dom can’t possibly be alive after Frank Marino delivers two more blows with his bat. If the writer or the director disagree with this assessment then they should have depicted Dom as alive but in a way which shows that he’s convulsing instead of comatose. It would have made for a far harrowing scene if Dom was twitching in his shallow grave. The scene is a perfect example of the mindlessness of criminal violence. If all five hitmen were told to bury the brothers alive, why not just simply break the limbs and jaws instead of going for the skulls?