During a Google Books search, I came across a 1976 entry from Volume 12, #133 of a rare magazine called Small Printer where an extra named Harvey Kane wrote an article titled A Little Extra. He stated: “My first scene was a rather long take involving quite a lot of action, and whilst waiting for the director’s call for action, I found myself in a grand Haddon Hall bedchamber with Oliver Reed (star of forty plus films), Fred Williamson (one of America’s top coloured actors), Patrick Wayne (actor son of John Wayne), Jimmy Wang Yu (billed as the new Bruce Lee), and the Japanese Swordsman Toshiro Mifune, who is capable of splitting a thick lead into two thins!” 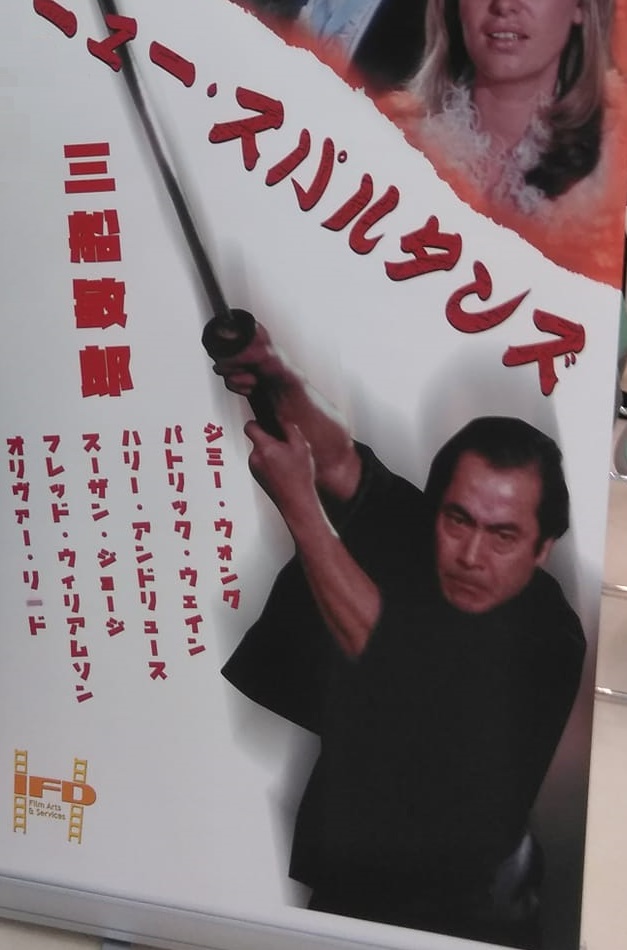 When writing about the above swordsman, Harvey wrote: “Toshiro looked quite placid sitting on the edge of a four-posted bed, and his costume gave the impression that we were filming The Mikado. Things Oriental have always attracted me, so going over to him and laying a finger on the long handle of his snickersnee, I asked if it was authentic or or merely a prop? Let me assure you dear reader that it was no prop, and when a remark was made by myself on Sheffield’s famous stainless steel blades he ejaculated a remark in Shinto.”

Harvey segues from the Jap to the English chap, Mr. Reed: “Having put him in a frame of mind for an execution, a move was made over to Oliver Reed, who was standing in front of an oil painting and sipping from a small bottle of brandy. Ollie has a great sense of humour, even during camera takes when he has passed out of camera range. Whilst working on the film, he would then not required, go in costume, into the nearby village of Bakewell – famous for its puddings. He was seen more than once sitting in the churchyard on a form in front of the parish church, sipping from his small bottle of brandy; the local Bakewellians looking at him with twisted expressions! It should perhaps be mentioned that his costume was that of a man of Holy orders!”

As for the other star from the Far East, Harvey referenced him again within the context of referring to an acquaintance who was also employed as a caterer: “Now, our devil belongs to the Karate cult, and so to keep things on an even keel, the devil came too. On arriving at the twelfth century hall, and amid the cluster of actors’ caravans situated at the entrance to the courtyard, a familiar voice bellowed out Come and have a cup of coffee, Harvey. It was of course our indubitable devil, donned in a clean white apron, standing. It was of course our indubitable devil, donned in a clean white apron, standing behind a table and dishing out cups of coffee and hot-dogs. It’s all free, he added. So as you can imagine, my call to the costumier was a trifle late. How on earth he landed that job at eight pounds thirty pence a day, and how the Devil he managed to get to the location before myself remains a mystery! As soon as the unit arrived at Haddon Hall, he made friends with Jimmy Wang Yu, his Karate idol, who is one of the leads in the film, so maybe it was a bit of Eastern power that found him that job amongst all that food!” 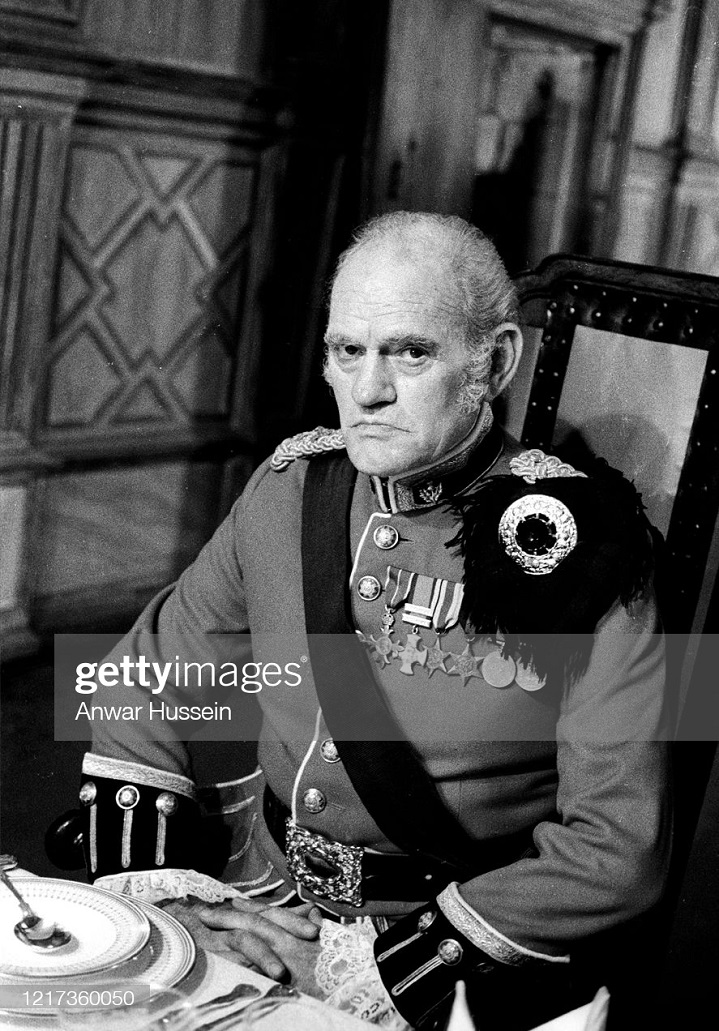 The above actor is Harry Andrews. According to their scant collection of black and white images from the production, the Getty Images site claims that they were taken in Derbyshire on June 1, 1975. In a spring issue of a British magazine called Films and Filming, it was mentioned that filming was to begin in Ireland. Unfortunately, the production later had to be moved from to England when the IRA threatened to slaughter all the English people in the cast and crew. Harvey had this to say about the new locales: “Picturesque and romantic Haddon Hall, an an olde worlde corner, and the seat of the Duke of Rutland , was the location of this venture , and set amid the glorious Derbyshire moors which are invariably dotted with golden pheasants; but at six-o-clock in the morning one can’t even see the moors let alone the golden pheasants!”

As for how Harvey Kane got involved with the production in the first place, he warily reminisced: “The voice on the other end of the telephone said – Have you heard about the New Spartans? If they are anything like the old Spartans we don’t want to hear about them was our unenthusiastic response to the question! Now, if there is a type family that we don’t much care for here at Shakespeare Press, this is that family – the Spartans. As a few infantrymen were required for the film, he got on the line to us. Well, of course, one can always use a little extra in these days of high inflation.”

The devil’s real name was Dave, who Harvey referred to next: “When he was told that they were putting me in a scene with some thirty nuns on the banks of the river Wye, he exclaimed If you think that I’m staying here doing the dissing whilst you live a Utopian existence with thirty nuns you must think me thicker than the great wall of China! He fumed a little then added and besides, on the subject of pay, what you pay me is another insult; I could do with a little extra too!” 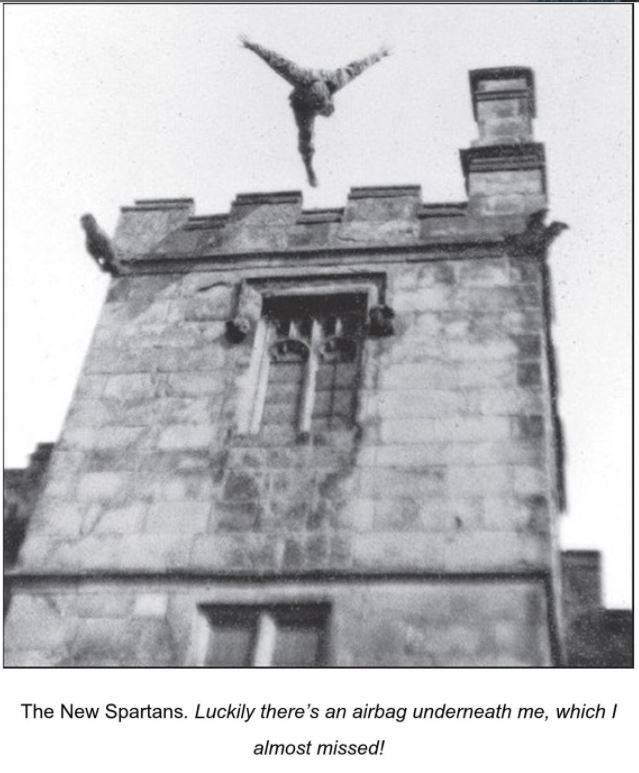 In Vic Armstrong’s 2011 memoir (The True Adventures of the World’s Greatest Stuntman), he mentioned that The New Spartans was one of several consecutive productions that he worked on with a stunt coordinator named Joe Dunne. Vic wrote: “The New Spartans was an action thriller shot up in Nottingham that despite a good cast including Oliver Reed, Susan George and Toshiro Mifune, never got finished. Still, it was important for me because it was the first time I ever saw and used an airbag. They brought one over from the States for me to be thrown off this castle and land on. Inexperienced and overexuberant, I launched myself off far too much. The cameraman, my friend Jimmy Devis, saw me disappear from the shot and feared I was going to hit the cement behind him. I actually landed right on the edge of the airbag, bounced off it onto my feet and did a running fall.”

It was all for nothing, as Vic said: “Eventually, they pulled the plug on the film when they ran out of money. The producer used to turn up on a Friday with a bag full of cash and pay everybody out of it, but it got less and less as time went on, until one day he didn’t show up at all!”

Vic’s final anecdote: “One night we were with Oliver Reed in this hotel and the local rugby club came in. When he’d had a few drinks, Oliver wanted to fight everybody. The bar was getting very noisy and boisterous. This small older guy, in his 50s, out with his wife, was getting really wound up. Oliver bumped into their table, knocking some glasses over, and this little guy jumped up and confronted him and his rugby mates. I don’t like this behaviour in front of my wife, he said. And if you want a fight, I’ll take you all on. And these hefty guys all folded up like a bunch of pussycats and cleared off. It was great seeing somebody call their bluff.” 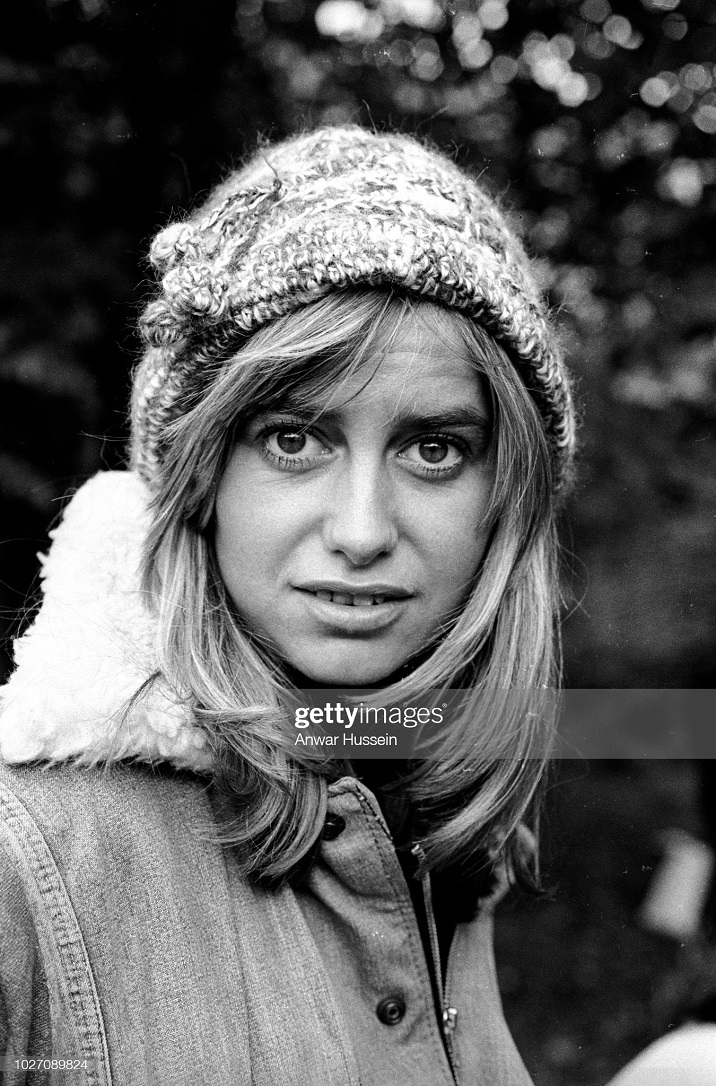 Now you can see Susan George’s face in full. You would be forgiven for looking at the cover and assuming that Helen Mirren was the token hot chick. Ironically, she wasn’t mentioned at all in Harvey’s article! Anyway, the only ’80s book that I can find which references this aborted film is the 1983 edition of The Film Year Book where Al Clark claimed that The New Spartans only managed to accomplish nine days filming before the axe fell. I have a difficult time accepting this because there is an auction archive site called Worthpoint which shows memorabilia dated October `75 instead of the aforementioned June. First there is Patrick Wayne’s call sheet dated Thursday, 25 October 1975 then there’s a screenplay whose latest date of amendment was October 13. Back to Al Clark’s book, he noted that personal conflict assumes little significance when measured against the commonest cause of movie breakdowns: money. Susan George said: “One minute we were working and the next minute we were told we needn’t come in tomorrow.”

Money could have been raised by putting together a trailer of the existing footage. Returning to the first paragraph, Harvey Kane described what could have been the literal money shot: “Action yelled Jack Starrett, the director, and the courtyard of Haddon Hall came to life as soldiers cleared the castle of captured terrorists. My place was at the rear of a group of terrorists that appear to make their way from the battlements via a flight of steps into the courtyard, and on past the camera into the main entrance. Directly behind me followed Oliver Reed, and the other stars who constitute The New Spartans, who made a defeated but peacock-like entrance. It was a long take to shot, and we were all very pleased when it was in the can! And you know, they never did use me for that scene with thirty nuns on the bank of the Wye. My services were required in yet another courtyard scene. It’s a pity that the unit used two cameras; and more’s the pity that the devil came too!”

This issue of Small Printer needs to be sought out by film historians because, going by what I could read from the snippet view preview of Google, there were at least two photos from the making of the film. Harvey’s captions were: “Ollie, along with myself in costume, can be seen taking a break during filming on the location photograph. The other still shows Dave, our devil, in grand form and complete with compositor’s apron, as he gets in on a picture with Patrick Wayne. Both photographs are exclusive to Small Printer.”