All roads lead to Rome

In late May of 1973, Bruce Lee had a long distance phone call with his mother (Grace Ho) where he told her that he was through with Hong Kong and that his next movie would be in Italy i.e. the deal with producer Carlo Ponti whose wife Sophia Loren was going to co-star. Bruce’s own doctor, Donald Langford, confirmed this in a phone call with Davis Miller that was used for the audio commentary of a 1993 documentary called Death by Misadventure: The Mysterious Life of Bruce Lee. When Bruce decided in early June of 1973 to do a movie for the Shaw Brothers film company in Hong Kong, it could have been a way to incorporate Ponti’s deal so that a Kung Fu Western would be made. This would have been a way for Bruce to surpass the Kung Fu TV series which he had failed to star in. Not only that but two cheques combined would have made him the highest-paid actor of his time. 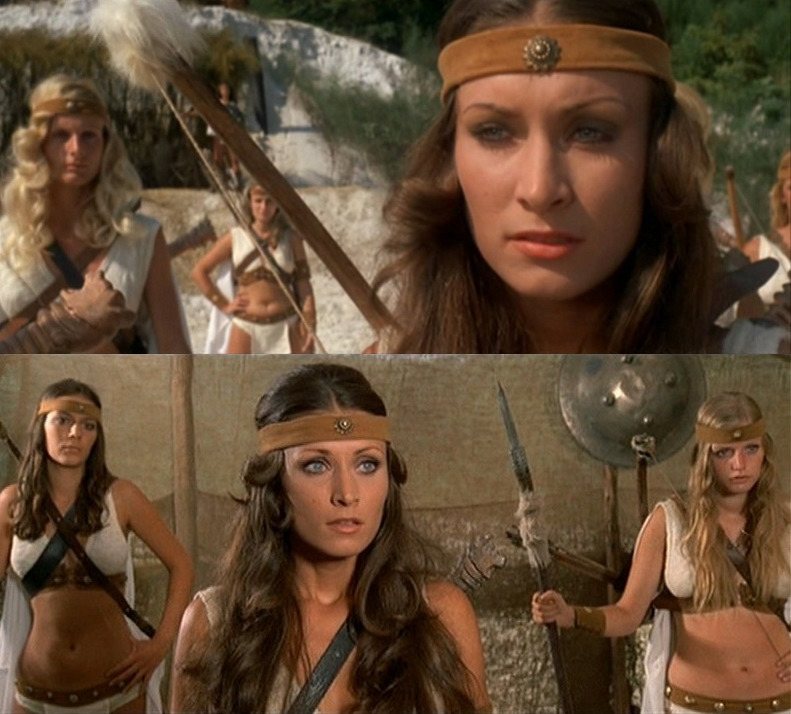 In a 1995 documentary called Top Fighter, Ron Van Clief (one of Bruce’s martial arts acquaintances in America) talked about going to H.K. in 1973 and being signed to a film contract by a man named Yeo Ban-Yee. Ron described Yeo as a manager for Shaw Brothers. This is a detail to note because Malisa Longo, who was in Bruce’s The Way of the Dragon (filmed in the middle of 1972), claimed that Yeo told her about Bruce’s death when she was in Rome. Malisa also said that she had signed a contract for Shaw where one of the three films that she was going to be in was with Bruce. After he died, she only did one movie for Shaw Brothers and that was the above Italian collaboration: Super Stooges vs. The Wonder Women (released in April 1974). When Bruce died in July 1973, one of his very few friends in H.K. was Jackie Chan. One of the reasons why Bruce trusted him was because Jackie had moved on from working for Golden Harvest to Shaw Brothers. In 1973, Jackie acted in a Shaw film called The Golden Lotus (released in January 1974) and was working as a fight choreographer on a Shaw co-production with Italians called Supermen Against the Orient (released in September 1974).

The director of the latter, Bitto Albertini, later directed a Western called Return of Shanghai Joe (1975). This was a sequel to Mario Caiano’s Shanghai Joe (1973). One of Bruce’s colleagues was a martial artist named Joey Chen. He appeared in a 1973 Italian co-production called Kung Fu Brothers in the Wild West, and he claimed that this was going to be Bruce’s next movie after Enter the Dragon. King Hu was going to be the director whereas Charles Bronson and Ingrid Bergman were going to co-star. Bruce had worked as a fight choreographer for a 1970 film co-starring Ingrid: A Walk in the Spring Rain. After Bruce’s death, Bronson and Bergman were replaced by William Berger and Rosemarie Lindt. This Kung Fu Western stars Jason Pai, who looks like a Chinese James Coburn. Another cast member is Tony Lou, who did many films with Jason. They even posed together topless on two different magazine covers in the seventies. Unlike Ti Lung and David Chiang, who only did so many films together because they were contracted to Shaw, these other two men collaborated for different companies. 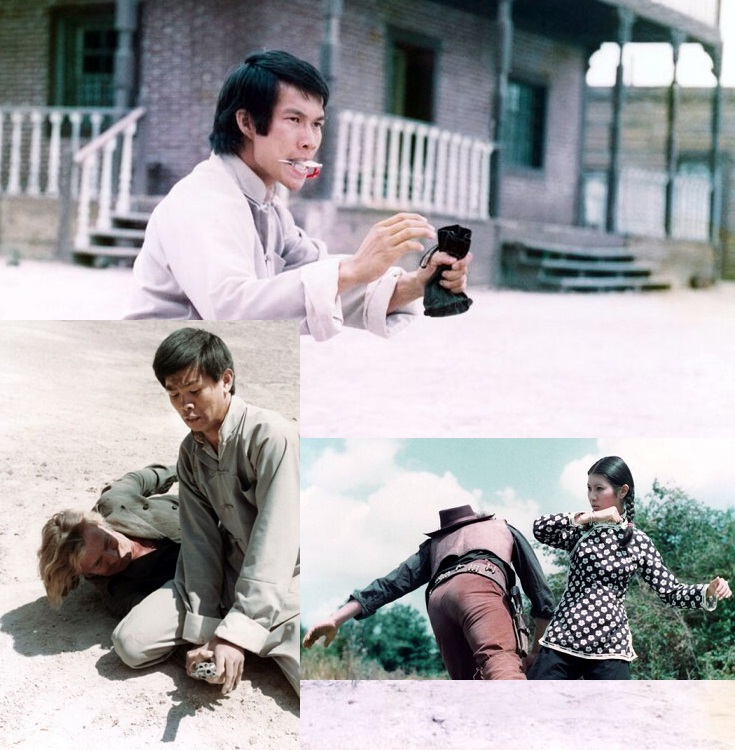 Jason and Tony did enough movies together to give the impression that they were friends…and maybe even more. They were not known to have wives or girlfriends. In fact, Sammo Hung’s Knockabout (1979) comedically alludes to this by having a literal couple of Kung Fu fighters. The name of Lee Hoi-San’s character (Chai Yao) is reminiscent of Jason’s Chinese name (Pai Piao) whereas the name of Wang Kuang-Yu’s character (Siu Koo) conjures the memory of Tony’s Chinese name (Lou Chun-Ku). It’s nothing short of serendipitous that Joey Chen cites Kung Fu Brothers in the Wild West as a potential Bruce Lee project because the producer and director of that film is the aforementioned Yeo Ban-Yee. Like Joey, Yeo was born in Singapore. Yeo used to work as an accountant for Cathay Organization in Singapore. In the mid-1960s, he was transferred to their branch in Hong Kong where he operated as director of accounting. Later, he was promoted to deputy general manager. He also participated in management and production.

In 1971, Cathay ended production in H.K. so as to focus on distribution. As such, Yeo joined the Shaw Brothers. During that same year, he formed a company called Yangtze Productions Limited. They produced Kung Fu Brothers in the Wild West. One of the executive producers for that was Riccardo Billi. He didn’t get any credit but his involvement was to do with having previously worked on Bruce’s The Way of the Dragon, where he can be seen as the bank manager. Riccardo also worked as an associate producer and locations manager. In fact, Malisa Longo later married him. Ironically, she did not appear in the Spaghetti Kung Fu Western which Carlo Ponti dropped out of producing. While Yeo Ban-Yee and Joey Chen opted to do their own Kung Fu Western, Carlo set about investing in a more stellar version of the concept. In 1974, he collaborated with Run Run Shaw to make a movie that was originally known as The Stranger and the Gunfighter before it became known as Blood Money. 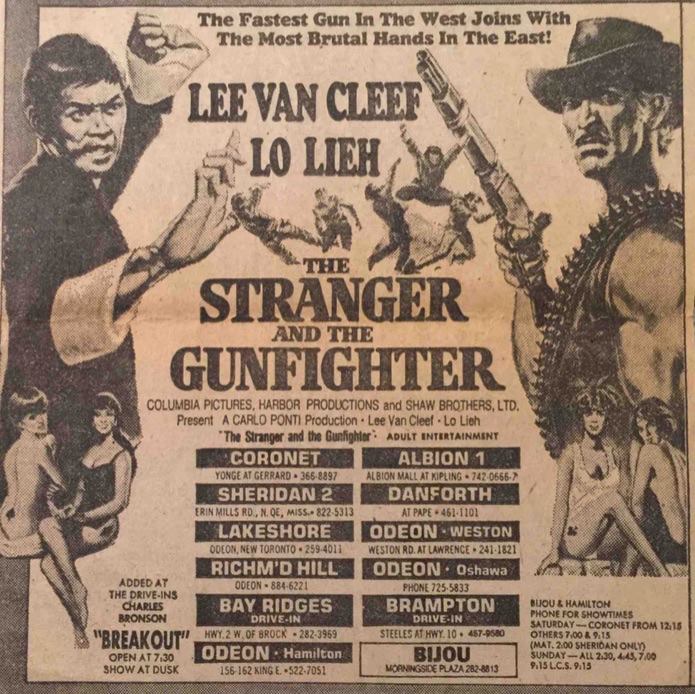 There was a missed opportunity to have Ron Van Clief appear alongside Lee Van Clief. Lo Lieh was Shaw’s biggest star but not their best martial arts star at the time (that honour goes to a real-life champion named Chen Kuan-Tai). I get the impression that, had Bruce lived, Sophia Loren would have been the leading lady instead of Patty Shepard whereas Malisa Longo would have played the role that was given to Femi Benussi. Femi and Patty had previously acted in an Italian film, Special Killers, which was shot from January 29, 1973 to March 9, 1973. Before The Stranger and the Gunfighter, Malisa and Femi had acted in My Darling Domestic (a 1974 release which began filming in June of that year) and Perverse Adolescence (a 1974 release which began filming in September 1973). Femi didn’t like the erotic lesbian scene that she had to do with Malisa in the latter.

After filming The Way of the Dragon in Rome for the last two weeks of May 1973, Bruce filmed the rest of the movie in Hong Kong. Word had to have gone round about Bruce in Italy because his widow, Linda, wrote a memoir where she claimed that Carlo Ponti was only one of several Italian filmmakers who cabled him fantastic others. According to Fighting Spirit, a Bruce Lee biography by Bruce Thomas, Lee was filming The Game of Death when Carlo cabled him. Herein lies the problem, Carlo was married to Sophia Loren whereas Riccardo Billi was becoming closer to Malisa Longo. Sophia was the bigger star, but Malisa was the one who Bruce bonded with. As such, there was bound to be a conflict of interest. It’s a tell-tale sign that even Sophia couldn’t be coaxed into being the leading lady of The Stranger and the Gunfighter. Carlo, himself, wasn’t all that committed to the film since he refused to have his own company, Titanus, involved in case the film turned out to be a flop. 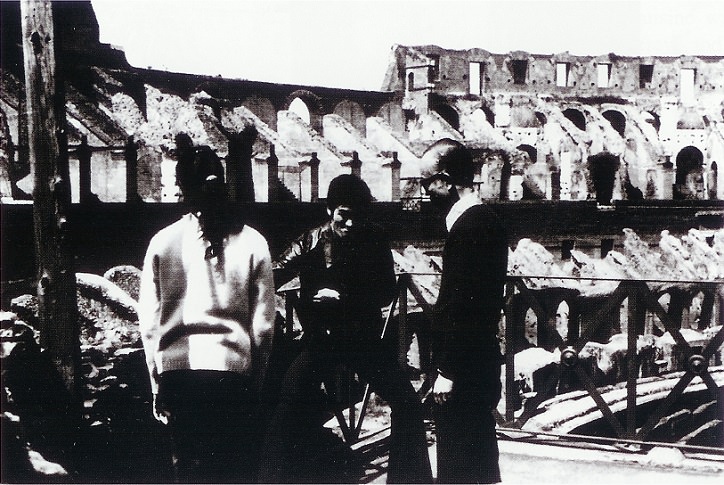 In an April 1999 interview for the City on Fire website, Bruce’s friend Bob Wall (who appeared as one of the fighting foes in The Way of the Dragon and Enter the Dragon) confirmed that Bruce’s next film after Enter the Dragon was going to be a collaboration with Carlo Ponti. It would appear that Run Run Shaw was also to be involved. In the August 6, 1973 issue of a magazine called Box Office, it was claimed that Bruce was going to be netting U.S.$ 750,000 for his next picture. In Hong Kong currency, this would have been over two million dollars. In the February 1973 issue of Cinemart, it was revealed that Bruce was going to leave Golden Harvest for Shaw Brothers in April with a 2.5 million H.K. dollar cheque. This didn’t happen because Bruce did some extended shooting for Enter the Dragon after March. By late April, a second insurance policy had been ordered for him via the Singaporean branch of a firm called Lloyd’s of London. The policy was to last from April 30, 1973 to April 30, 1974.

Perhaps he knew that someone would try to sabotage his collaboration with Shaw. After his cannabis poisoning on May 10, plans were delayed further. 2.5 million H.K. dollars is a strangely specific number. It’s not an even one like 2 or 3 million. The reason for this is because it was meant as a diss towards Warner Brothers, who were the people behind the Kung Fu TV series and Enter the Dragon. Warner’s president, Ted Ashley, was only willing to cough up U.S.$ 250,000 for the budget of Enter the Dragon. This forced producer Fred Weintraub to get Golden Harvest’s Raymond Chow to provide the same amount so that half a million dollars overall would give the movie a half-fighting chance to succeed in the world market. Putting this into perspective, Bruce’s The Big Boss cost less than U.S.$ 100,000 to make whereas Fist of Fury cost U.S.$ 200,000. The Way of the Dragon was set at U.S.$ 130,000 but Bruce was 40% over-budget, so the final budget was U.S.$ 182,000.

With Carlo Ponti and Run Run Shaw by his side, Bruce wanted to stick it to Ted Ashley by proving that Italians make the best Westerns, and that Chinese make the most out of small budgets. Going to Italy would have made Bruce the Chinese version of Marco Polo (who reinvented noodles as spaghetti). It’s not a coincidence that Shaw Brothers made a movie called Marco Polo, which was released in December 1975. Also released in 1975 was an Italian film made in H.K. with H.K. stuntmen: Flatfoot in Hong Kong. Starring Bud Spencer without Terrence Hill, it wasn’t a collaboration between H.K. and Italian companies but the spirit was definitely there – fighting spirit. In the April 1974 issue of Fighting Stars, there was an article about Bruce Lee’s influence on Italian cinema e.g. Carlo Ponti producing Mr. Hercules Against Karate (1973) a.k.a. Ming, Ragazzi!

Ironically, this Fighting Stars issue doesn’t cover film-maker Ng See-Yuen making two H.K. films back to back in Italy: Kidnap in Rome (a 1974 comedy for Seasonal) and Little Godfather from Hong Kong (a 1974 drama for Eternal) – both starring Bruce Leung Siu-Lung. Dan Erlich interviewed a foreign marketing executive for Titanus Studios who said something that reminded me of Flatfoot. This executive, Robert Little, was a partner in Cathay Films from London, who acted as Raymond Chow’s European distributor. When talking about Bruce Lee, Robert said: “His popularity was so instantaneous that the industry here was caught flat-footed. At first, I never thought this type of movie would go over. These films had been showing all over the Orient for years, but their quality was extremely poor. To prolong the success of these movies, major studios will have to try their hand at such productions. The films will need an American name or a European star and a good Chinese actor.”