A month ago, I was reminded of The Dynamite Brothers because there is a scene in Killer Joe (2011) where Juno Temple is watching the finale while attempting to mimic the martial movements. It’s difficult to find behind-the-scenes information on The Dynamite Brothers. Thankfully, there is a chapter about the film in a 2021 book written by the executive producer. Samuel M. Sherman’s When Dracula Met Frankenstein details his working history with director Al Adamson. Before I got my hands on the book, I could only imagine what events had transpired. For example, the common denominator between The Dynamite Brothers and Star Trek is the RKO Forty Acres backlot. This was a pretty big coup for a non-union shoot. Throughout his career, Al Adamson wasn’t above shooting without permits and doing dodgy dealings with gangsters. Things were made easier for myself when I happened upon the August 6, 1973 issue of Box Office Magazine. Before Charles Earland was hired to be the composer, the first choice was Eddie Harris. The score was originally going to be handled by Atlantic Records, Eddie’s label, but they dropped out. As for Sam Sherman’s book, I learned the following… 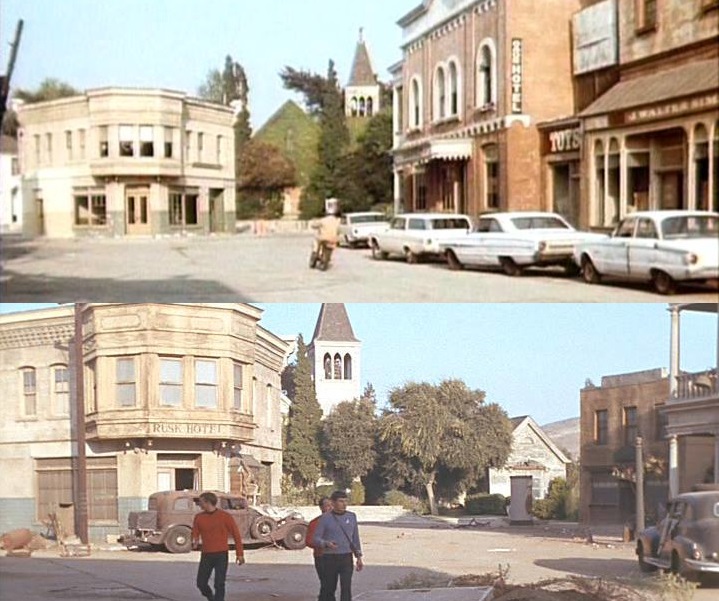 The credited writers/producers, Jim Rein and Marvin Lagunoff, were mainstays in the music business with no film experience. Jim had a connection with a Chinese man who was a professional soccer player. Naturally, I am reminded of Eric Tsang because he is a friend of the film’s star – Alan Tang. Eric raised some money which he, Jim and Marvin decided would be used to make a martial arts film in New York. I’m reminded of the fact that Alan’s Wing-Scope film company later made a film called New York Chinatown (1982). Back to The Dynamite Brothers, one can only imagine how Eric met Jim and Marvin. Perhaps Eric thought that black music in a martial arts movie would make the genre more appealing to a black audience, especially in light of the Chinese whispers surrounding the making of Bruce Lee’s Enter the Dragon.

Anyway, Eric, Jim and Marvin wanted to shoot the film without sound and then send it off to Hong Kong where it would be dubbed in Mandarin. This is clearly influenced by the making of Bruce’s Enter the Dragon where the film was partially dubbed and edited in Hong Kong. As for Eric Tsang, Jim Rein and Marvin Lagunoff, the trio needed a production company to carry out the plan. Executive producer Sam Sherman advised them to film in Los Angeles because there are a lot of sparse locations where you can stage car chases, blow up cars, and arrange spacious fight scenes. Sam recommend Al Adamson to be the director since he had a reputation on the West Coast. Jim and Marvin were a bit reluctant to proceed with Sam, so it took many weeks of communication in negotiating the project between Sam’s company “IIP” (Independent International Pictures), Jim & Marvin’s company (Larein Management Productions), and Asam – the Asian company.

If reading between the lines could be compared to the philosophy of the Wing Chun style of Kung Fu, then I am “closing the gap” with another interpretation. It seems like Asam wanted to make a movie that would be similar to two Golden Harvest films that Lo Wei had directed back-to-back. After Bruce’s death in 1973, Lo Wei went to San Francisco where he shot Chinatown Capers and Yellow-Faced Tiger. Both were truly Chinese films in that the main participants were Chinese. Although martial arts films being all the rage in America, Sam Sherman initially didn’t want to cash in on the trend because martial arts films were mainly played in urban areas with big downtown theaters whereas his I.I.P. company specialized in drive-ins for the Southern and Midwest markets. Despite the racist implications, it was his idea to have an African-American co-star. More specifically, it was him who vouched for Timothy Brown after seeing Bonnie’s Kids with his wife. 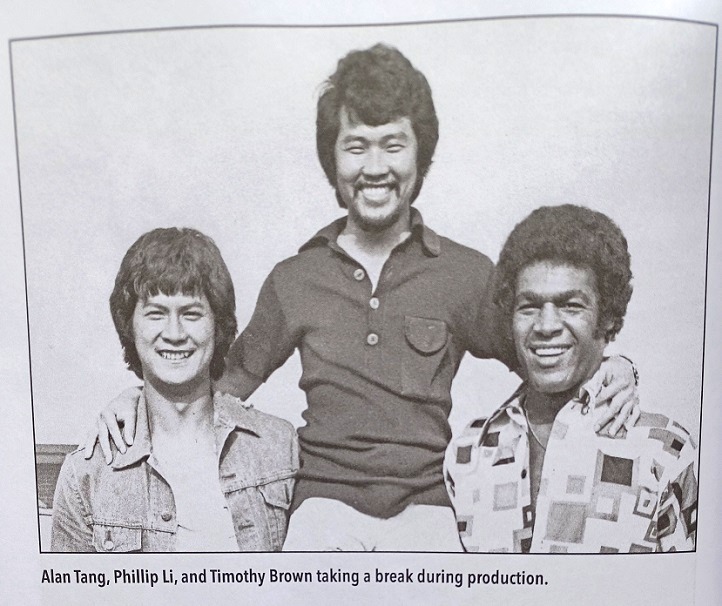 Jim Rein and Marvin Lagunoff represented Charles Earland, who didn’t write music. Everything was improvised because he was a jazz artist. This was maddening for Sherman because Charles was as equally inexperienced in film production as Jim and Marvin. Charles and his musicians had monitors on which they could watch scenes from the film. They spent more time and money than originally planned but the record company footed the bill. This seems to have levelled out Sherman’s original intention since the film was scheduled to shoot for four weeks but was filmed in approximately half that time. The classic soundtrack was recorded in November 1973 and remixed in December of that year. Reading in between the lines, it seems like Jim and Marvin wanted to make a movie so that they could sell an album. Usually, you make a soundtrack so that you can sell a film.

After the film was completed, Sherman agreed to distribute it but not through I.I.P because if the film flopped then everyone would be mad at the company. He was only willing to distribute it for foreign sales. Again, this echoes the making of Enter the Dragon because Warner Brothers had only agreed to invest in it due to the size of the Asian market. While The Dynamite Brothers was still in production, Sherman was working on finding foreign buyers. He scored big with Indonesia in such a way that the amount of money made had set a precedent for him. This makes sense because Alan Tang already had the experience of filming there. He worked for an Indonesian company called Goldig, which was ran by brothers: Alex Gouw and Hendrick Gozali. As for domestic distribution for The Dynamite Brothers, Sherman knew someone at Columbia Pictures but they refused to be the distributor because the movie had no youth appeal.

Adding to the stress was that two of the main Chinese backers had moved from H.K. to live in New York. They were constantly demanding U.S.$ 150,000 in cash. Sherman called someone who already had experience with martial arts and blaxploitation movies – Jerry Gross, who was screened the film, asked how much Sherman wanted, and agreed to pay without any argument. Perhaps Jerry was smart enough to deduce that Sherman was under duress. Much later on, B-movie producer Daniel Q. Kennis remarked that it’s rare to find the sale price being the same as the original asking price. In his many years of being in the film business, that was unheard of. In Jerry’s case, he already had the experience of putting up between the region of 200 and 400 thousand dollars. Once Jerry agreed to the movie, a contract was produced, lawyers were brought in, and the Chinese investment group were the first to be paid before anyone else participated…albeit the Chinese were paid in increments. 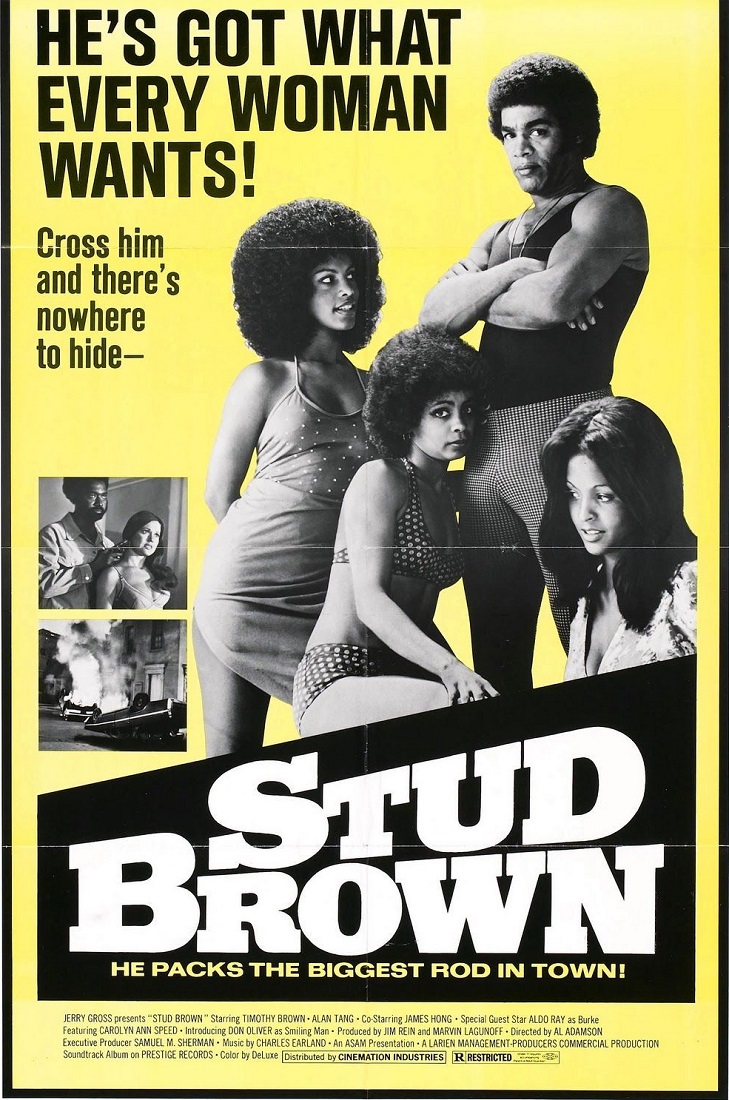 The film’s lack of success resulted in pressure from the Chinese backers to the extent that Sherman informed Jerry that they wanted a meeting. Sherman also told Jerry that they put up the money for the film and if they don’t get paid then Jerry will be killed. The next day, Jerry agreed to pay in two installments. Shortly thereafter, Jerry’s Cinemation Industries filed for bankruptcy and went under. So now the Chinese are feeling good because they got their money, but they’re still pushing on the foreign sales. Sherman finally worked out a deal to buy them out of the entire film. What happens next? Eric told him: “It’s good you were able to handle Jerry the way you did and get us the money. I funded the film through some bad people in Chinatown who are in the Chinese mob. They would’ve killed me and him.”

Sherman wanted the title to be Black Belt Brothers but, by the time that they finished it, they had heard from Warner Brothers that they had a movie called Black Belt Jones. This starred Jim Kelly from Enter the Dragon. Warner asked them if they could come up with a new title, so Sherman changed it to The Dynamite Brothers. The movie was also released under the following titles: East Meets Watts, Stud Brown and Killing of a Chinese Bookie. The original title was reported in the following magazines: Box Office (August 1973), Fighting Stars (April 1974) and Black Belt (ditto). In the latter, Howard Jackson was interviewed (the below image is from this issue). He was a Karateka. He’s not credited in the final film, neither is Emil Farkas. Howard’s friend, Steve Fisher, is credited. Howard didn’t talk much about the movie, and I can’t interview him because he’s dead.

Not to mention Alan Tang, Peter Chan Lung and Lam Ching-Ying are dead. Director Al Adamson was murdered in 1995, which is probably why Sam Sherman felt compelled to speak on his behalf by writing a book about their collaborations. It’s just as well because Alan Tang’s first American movie garnered no special TV reports by Chinese news crews nor Chinese magazine coverage with exclusive photos like there would later be with Jackie Chan’s The Big Brawl. There have been no Chinese-themed interviews about it in the internet era. It speaks volumes about how Howard Jackson was so talented that he was cast in a 1979 H.K. movie called The Magnificent 3. Legendary martial arts movie star Yasuaki Kurata is one of the titular trio. Howard was a favourite of Chuck Norris since he worked on Code of Silence, The Delta Force, Walker: Texas Ranger, Missing in Action III and Invasion U.S.A. 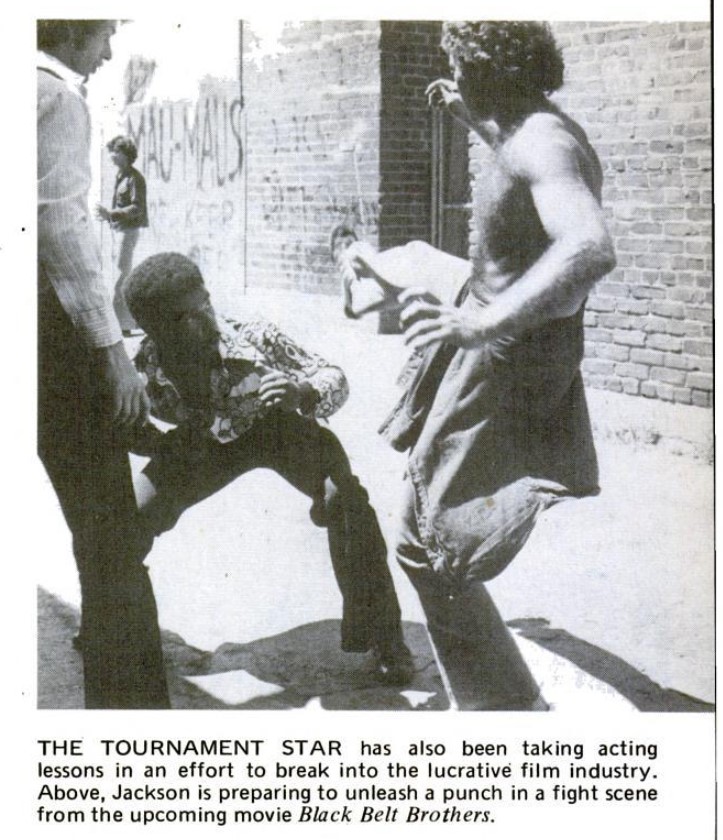 In the April 1974 issue of Fighting Stars, it was reported that 15 martial artists from H.K. were brought over for the making of the movie. Clearly, Alan Tang knew about Bruce Lee’s plan to take 20 stuntmen with him to Hollywood. Minus Alan, 14 H.K. stuntmen seems an awful lot for a low budget U.S. movie, especially when you consider the stuntmen who are used in more than one scene, and there aren’t that many fight scenes…at least in the released version. Only 8 of them are credited in the opening credit sequence, but then there are American stuntmen who are not credited despite having appeared in the final cut: Ed Perry, Kurt Woodlon, Jim Stiebinger and Daniel Spelling (uncle of Tori Spelling). Fighting Stars also reported that The Dynamite Brothers was released in January 1974. Although more American and more modern than Enter the Dragon, The Dynamite Brothers failed to make an impact in the U.S. market.

Alan’s English acting was so rough that you can only hear his voice for one scene that was shot in sync-sound i.e. the waterfall scene. Ironically, he worked as an English translator for a H.K. radio station before he became an actor. When I saw the movie, I noticed a couple of stuntmen who weren’t credited – Yuen Miu and Bruce Tong Yim-Chan. One of the Chinese men credited in the opening credit sequence is Kenny Mack. His Chinese name is Mak Bing-Kyun (麥秉權). He is the cousin of Leung Yat-Chiu (梁日昭), who is Hong Kong’s most famous harmonica player. Leung was born in 1922, and died in 1999. Back to Mack, three of his friends on Facebook are H.K. martial arts actors: Hsiao Hao, Chung Fat and Ng Ming-Choi: the last two being stuntmen who Bruce Lee wanted to bring along with him to Hollywood. Kenny studied at the City College of San Francisco and Galileo High School (also San Fran). The Dynamite Brothers was partially filmed in San Fran, according to Mack.