High stakes on a plane

I’m not a fan of Harrison Ford’s post-eighties filmography, but there was a guy who wanted to tell people on a message board about working on Air Force One (co-starring Gary Oldman and featuring William H. Macy alongside Glenn Close). Back in the `90s, you could get away with posting anecdotes because the internet wasn’t as monitored as it is now (there’s a reason as to why the IMDB’s forum was shut down). Back in the decade when you could get away with posting spoilers without studio heads freaking out and demanding some sort of punishment, Carl J. Stensel (the art director) had these things to say… 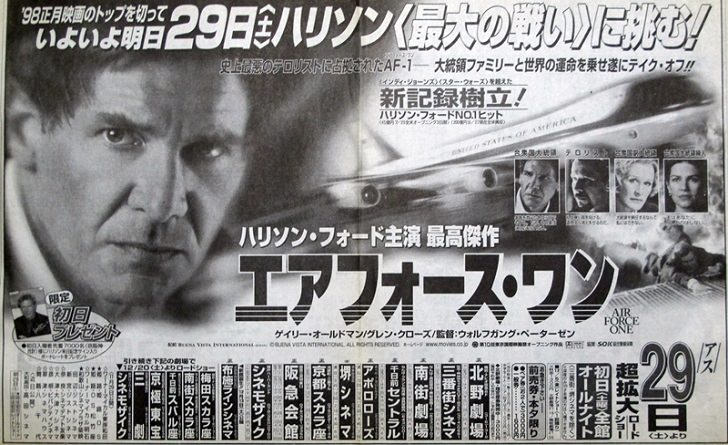 I am looking for a F-15 cockpit mock-up for a movie. What I need is a mock-up of a single seat model, preferrably a F-15C (although we could work with a F-15A), and build a new instrument panel. If you have a source for the F-15C controls, that would help too

When you are dealing with Wolfgang Petersen, the notion of “a script” is a laugh. He tends to do rewrites a few pages a day all through production. On Outbreak, we went through all of the script colors three times, and were on our fourth. I lost count on Air Force One. The issue of when Gibbs would be revealed as a traitor was a hotly contested one. It went back and forth throughout preproduction. Originally, he was not to be revealed until the end of the film, and my recollection was that this was the intent most of the time.

It wasn’t until well into shooting that a version revealing Gibbs earlier on started to be dominant, and, to tell the truth, I was a little surprised at the screening by the way things went, given what seemed to be happening during production. As for the motivation of Gibbs, I never heard anyone worry very much about that. Sorry. It is not a matter of scenes being left out. An explaination of this simply didn’t move the film forward, and so it isn’t there. This is similar to the issue about parachutes being brought to the plane at the end – we were after excitement here, not rationality. I thought that it looked pretty good on film, and that’s what counts, isn’t it?

Yes, other people were considered, but Wolfgang Petersen wanted Glenn Close very badly for this role. The production underwent considerable stress to fit into her schedule. Part of the reason for this choice was that the character of the Vice President was originally much more equivocal. Originally, Mr. Petersen saw her as quite interested in the possibility of replacing the president. Given Ms. Close’s history of dark roles, this was, I think, a good choice. As it turned out, by the end, her character had lightened up considerably, but she still did a very good job.

Thomas, look closer. There are seatbelts on the sofas. The conference room seats were custom-made.