Dragon Dynasty being the name of Harvey Weinstein’s DVD company for Asian films doesn’t feel right when you have the Shaw Brothers film studio to contend with. Sure, some of the DVD releases are from Shaw. However, even those releases don’t do justice to the panoply of genres that the studio partook in; especially since the ratio of martial arts movies to other genres isn’t as overpowering as you would think. The way that S.B. made movies has drawn comparisons with the mindset of Roger Corman. 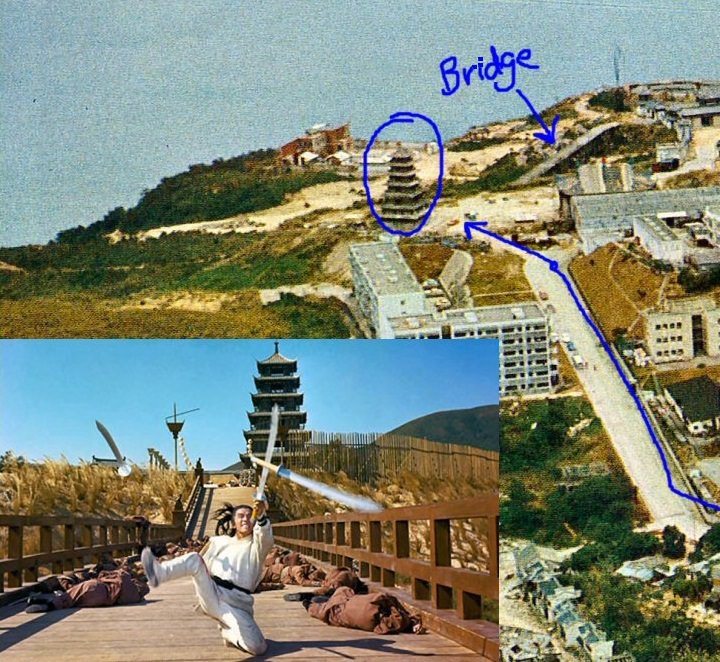 Before he became a movie director, he went on a tour in Asia that resulted in a visit to the S.B. studio. If any such influence of his on S.B. had occurred then it would have to be convincing international distributors and Western film companies that professionalism doesn’t affect the profit in the many ways which you are thinking of. The martial arts genre shares many similarities with the horror genre despite the lack of crossover movies, so it wouldn’t be a stretch to describe the studio as a house of horrors.

The studio’s partnership with a South Korean company named Shin Productions allowed it to conduct location scouting and shooting near Seoul, where (unlike Hong Kong) open land and cheap labour were abundant. For example, The Last Woman of Shang (1964) involved over 5000 local extras. Co-production with Thai, Vietnamese, Filipino and Indonesian film companies enabled S.B. to evade all kinds of anti-Chinese film laws in these nations. In doing so, markets were opened. It certainly helped that there would be different versions (not just languages but leading stars). As for the budgets of S.B. movies in general, budgets were no higher than 700,000 or 800,000 dollars in H.K. currency. It wouldn’t be a stretch to say that the budgets were about as big as any given Hollywood TV series before the eighties. 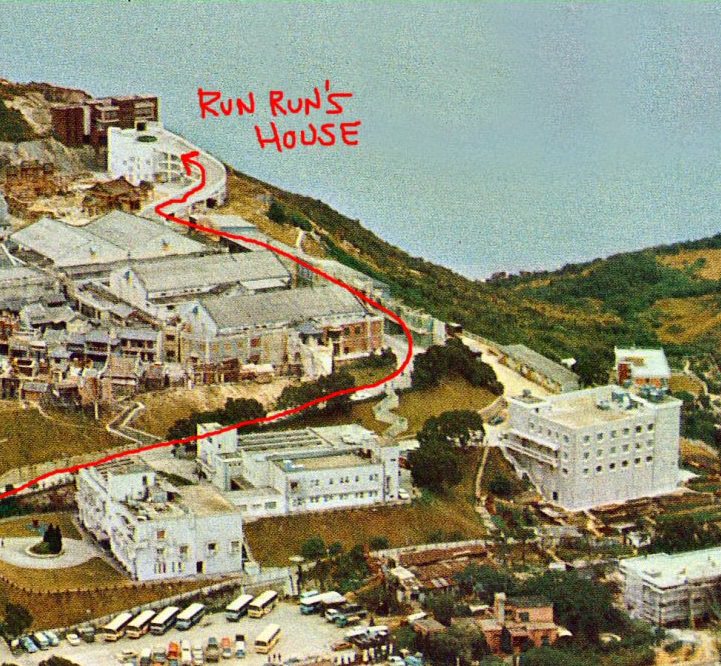 S.B. were the best at test screenings, because they used to run theme nights where the audience can only be one gender. The women’s screenings were the most successful. It was easy to snare hundreds with the promise of being able to snag female products that were endorsements. Typical promotions would include a negligee fashion show or a cosmetic expert giving free facials and make-up. Men’s screenings resulted in contests happening in the form of arm wrestling and drinking competitions where the loser still got to have a free drink (as did the rest of the demographic). As off-kilter as this sounds, these deals happened much like how anything is organized in Hollywood – interpersonal relations between line producers, entertainment lawyers, executive producers, talent agents and business affairs executives.

As you can attest from this, S.B. rivalled any Hollywood studio in terms of output. In 1965, S.B. set a record of 26 released films. Run Run Shaw was described as the world’s busiest film producer. In 1966, the output grew to a peak of 40. When S.B. ceased film producing in the mid-eighties to concentrate on TV, it was sad to see them adopt the BBC format – shooting in film for exterior shots while shooting on video for interior shots. An uneasy contrast for fans of either format. What made the transition all the more sadder was that they previously rivalled Golden Harvest (formed by an ex-Shaw guy) as far as collaborating with Western studios e.g. Blade Runner, Inseminoid and Meteor. The most appealing of U.S. collaborations with G.H. were The Cannonball Run, Enter the Dragon and High Road to China. Considering that The Man with the Golden Gun was mainly filmed in Hong Kong, it’s a shame that the services of S.B. were not sought out. 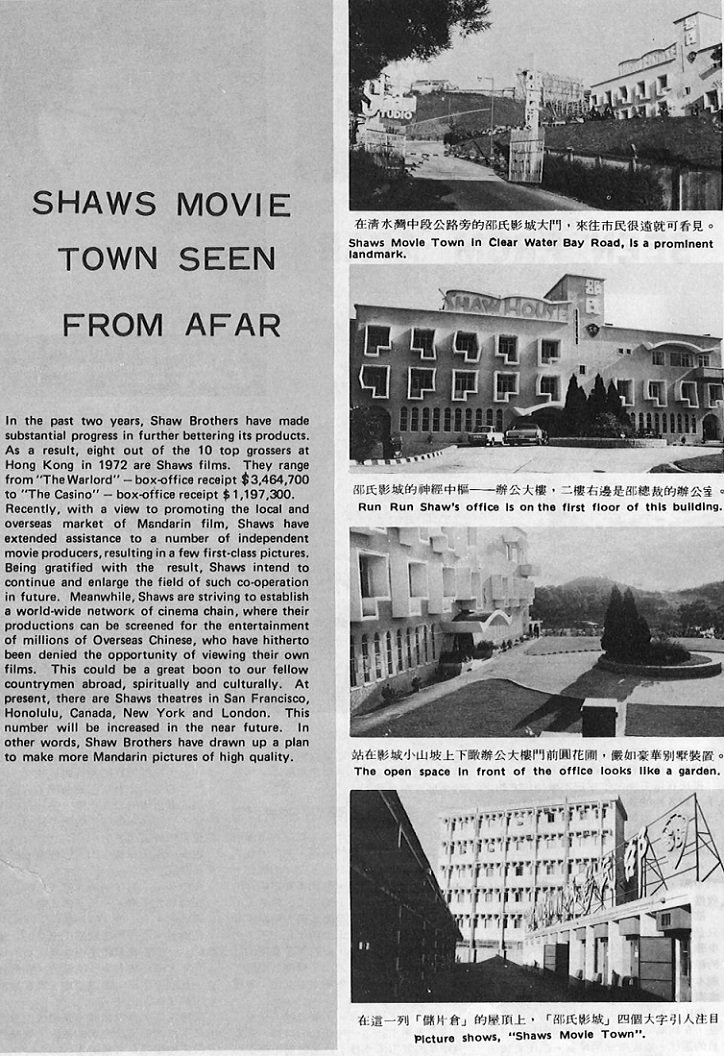 S.B. still managed to capitalize on the James Bond trend by making several spy thrillers. One such movie was titled The Angel with the Iron Fist (1966) – such a title would allow for a remake to be both a variation of Angel (1987) and a rip-off of Marvel’s Iron Fist. As for what was the most flagrant of 007 rip-offs, that was Special Agent 009 (1967). When S.B. first made movies in the Cantonese dialect (from the late fifties to the late sixties), the average budget was 150,000 dollars (30,000 in U.S. dollars). Well, this is according to the man who was in charge of Shaw’s promotion department. Someone with a closer involvement with the actual making of the movies had claimed that the budget was between 40,000 to 60,000 versus the average Cantonese film from the MP & GI studio, where the budget need be no less than 50,000. The cheapest S.B. films took 15 days to film, but the most expensive films took 22 days (that’s 3 sitcom episodes).

The below collage of photos may seem like Heaven for aspiring workers who worry about not being able to get to work on time, but there have been a few suicides. Some people who were contracted felt like they were prisoners since they were underpaid and only a few had private bathrooms. Chun Kim (a.k.a. Qin Jian) hanged himself in his quarters. He was depressed because he had separated from his wife. He lived on the same floor as Cheng Pei-Pei. After she moved to another floor, he hung himself to a pipe that ran between their bathrooms. An actress named Li Ting committed suicide. Had she been accustomed to living in the Peking Opera equivalent to a boarding school, she might have been inclined to see S.B. as a step up. 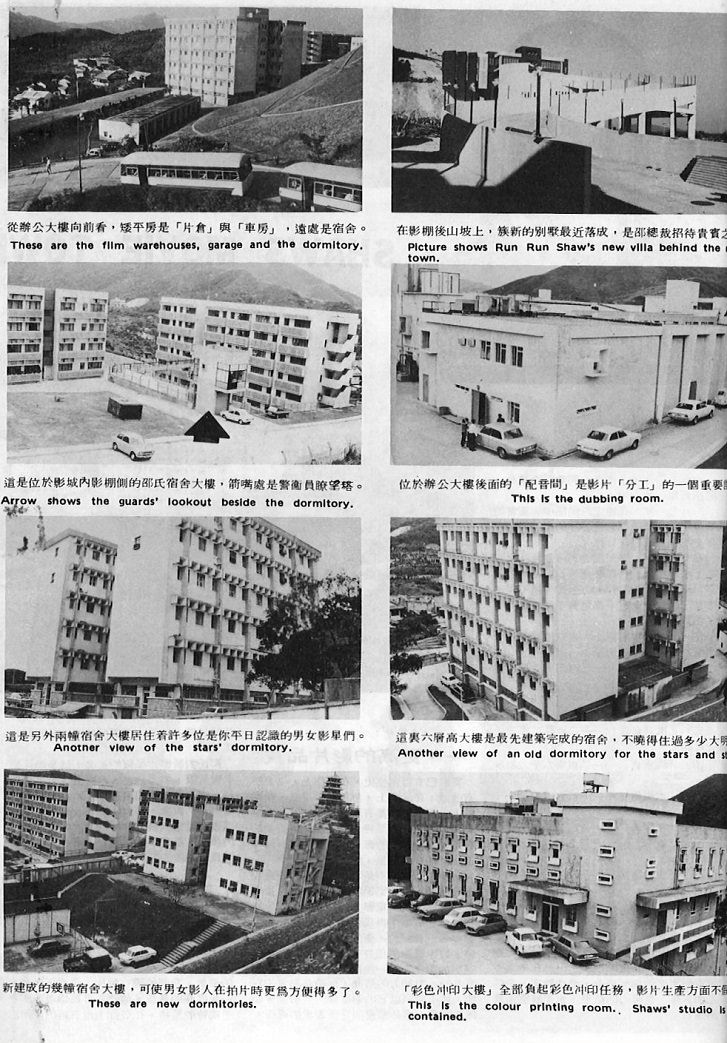 Despite all this tragedy, some directors thought it was best to treat S.B. like a retirement home. Certainly, that was the case for Chang Cheh (the most prolific of the S.B. directors). Raymond Chow, the founder of Golden Harvest, had cut his teeth as an employee of S.B. after working as a reporter for Voice of America. He became the promotional manager for S.B. in 1959. He took over as manager of a 1958-formed fan club called Shaw’s Jade Girl Fans Association. By mid-59, it was said to have a membership of 30,000 teenagers. Ray Chow was asked to extend the group by renaming it Shaw’s Film Fan Club. This then became the name of a monthly magazine. Ray’s reputation as a spin doctor can be traced here.

There was a popular young actress named Lam Fung, who was advertised as being middle-class when she wasn’t. Such publicity ensured that no tabloid could ever accuse her of being a raucous party animal. Back to the aforementioned MP & GI (the main rival of S.B. before G.H. came along), Grace Chang found herself appearing in a Hollywood film that was filmed in Hong Kong. It was titled Soldier of Fortune. It starred Clark Gable. This was 1955. In 1967, one of the most unique of S.B. classics was released. It was titled King Drummer. This was 5 years before the release of King Boxer. As it wistfully turns out, the title/credits sequence of King Drummer foreshadows a staple of Kung Fu movies where a person exhibits their skill in front of a blank screen. 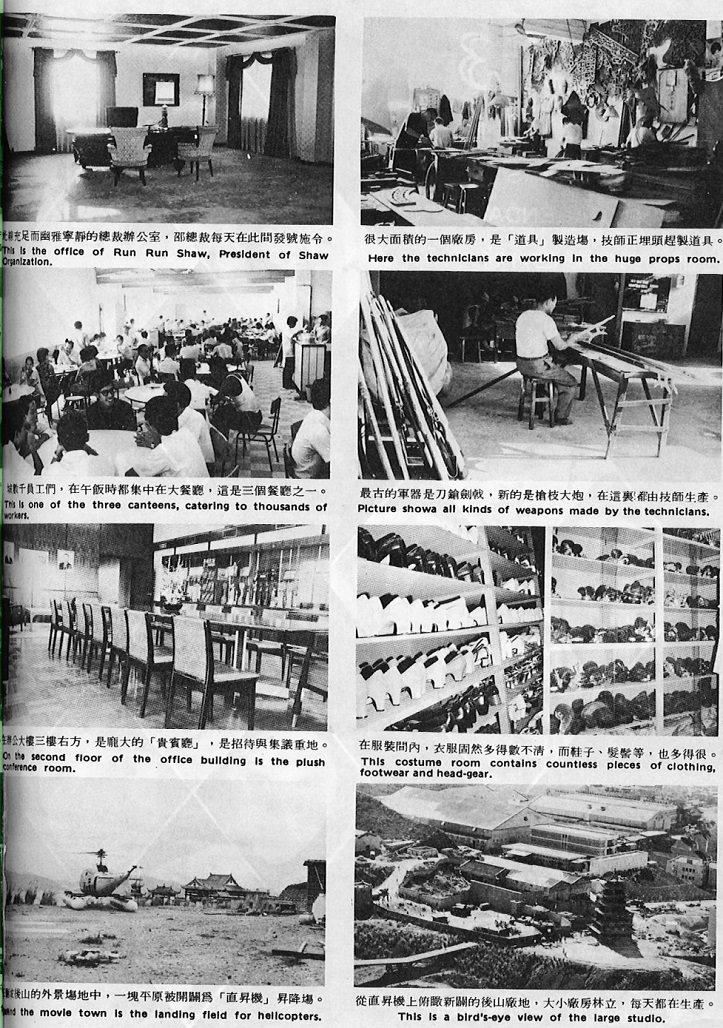 One of these days, that tradition should be resurrected but only if it’s to show some blue screen (or green screen) effects. Beyond the opening credits, the film (a combination of a musical, gangster movie and domestic drama) is classic for having a nightclub named Sharp & Flat Bar. Racially, the good characters have Chinese names whereas the bad ones have English ones. This is before it became common for British people to play villains in U.S. If the tea house is the common location for a Kung Fu movie then the common location for a H.K. musical is the nightclub. Taken one step further, musicals and martial arts tournament movies are where performers play performers.

On a general note, making a Chinese musical that revolves around a nightclub is like a Hollywood musical that takes place in show business. For all the differences, S.B. was keen on wanting to emulate Hollywood for the prime consideration to speed up production in the hopes of increasing capital accumulation. Basically, making cheaper movies meant that it was quicker to recuperate. This was made all the more easier by the fact that the brothers owned a series of cinema chains throughout Asia. They truly monopolized the Asian film market. 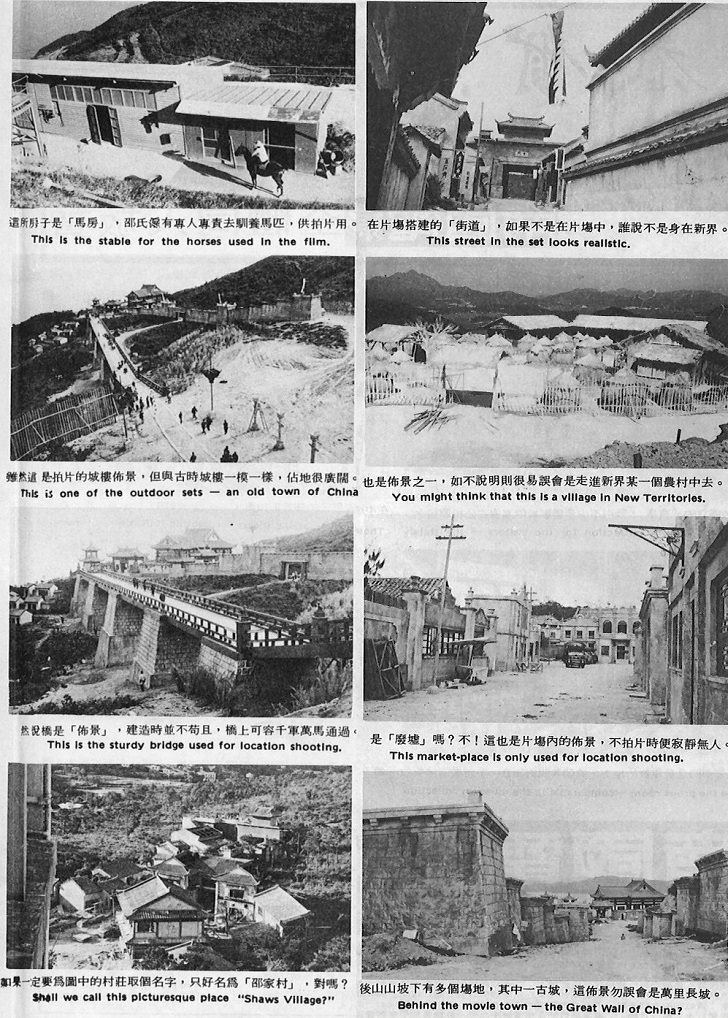 Unlike other Chinese studios who were prejudiced towards the Japanese because of the world wars, the Shaws were smart enough to realize that Chinese film-making would be improved by hiring Japanese cameramen since Japan was way more advanced than H.K. As financially grand as this sounds, it was cheaper to hire Japanese film technology. Because of this, Japanese directors of H.K. cinema (such as Inoue Umetsugu) were regarded (or rather disregarded) as mere technicians or journeymen.

One of the most tragic deaths that a S.B. director had was not self-inflicted. Making the death even more tragic is that it took place on a Valentine’s day. Even the death itself was romantic. It was Chinese New Year’s Eve in 1961. Ma-Xu Weibang was on his way to pick up some fruit after dinner with his girlfriend. He was knocked down by a reckless bus whose driver was in a hurry. Had he lived, we would have seen Kung Fu films depicted in the style of German Expressionism. 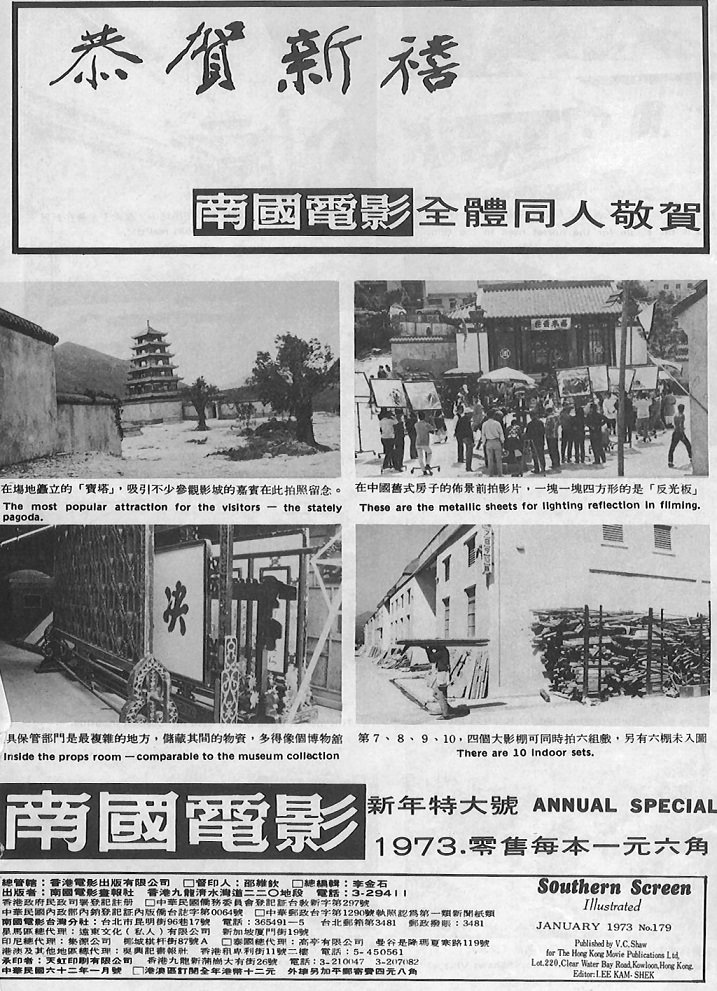 All things considered, S.B. was such a cheap studio that even a prestigious actress like Cheng Pei-Pei had to moonlight as a voice dubbing artist and dance teacher in order to make ends meet. On the side (especially on the plus side), she studied English, dressmaking and ballet for future jobs overseas. Her favourite pastime was going to the cinema, where she could easily watch four or fives movies in a single day. On occasion, she would even write film reviews. Back to the whole moonlighting thing, it was rare for any actor to be in two films at once during the era of the late sixties and early seventies.

For example, Cheng Pei-Pei found herself having to act in The Thundering Sword and Blue Skies on the same day. Anthony Lau Wing (a.k.a. Tony Liu as remembered by Bruce Lee fans) is the best example of what it means to be a full-time actor for the S.B. workaholics. Like what Cheng said – he would work from morning to afternoon, afternoon to night, and night to morning. Often, it would be days before he could lie down on his own bed. By the way, most of the information in this article came from a book titled China Forever: The Shaw Brothers and Diasporic Cinema.