It’s strange that Steven Spielberg was persistent enough to get permission for Michael J. Fox to play Marty McFly, but couldn’t do the same for the titular subject. Apparently, an actors strike in 1980 meant that Tom had enough time to act in Raiders of the Lost Ark before starring in Magnum P.I. as Thomas Magnum. This is because the strike, which began in July, had delayed the start date of the TV series from March to December. The George Lucas production was scheduled to begin in June, yet you think that the team behind Magnum P.I. would have got enough time to at least do the pilot had they begun in March. Unless they were afraid that the movie would result in Selleck wanting a shorter and richer contract, CBS should’ve delayed the series so that him being in the movie would allow the series premiere ratings to be big. 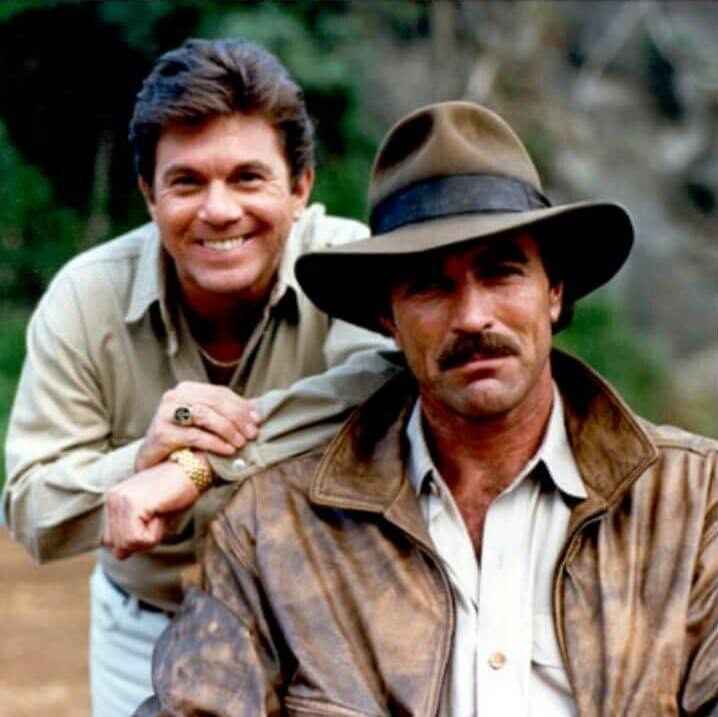 As it turns out, Ford snagging the part led to him being in Blade Runner (instead of the Star Wars assumption) because Steven was convinced that he would be Hollywood’s biggest star. Ridley Scott’s interest was piqued by Steve’s claim, and the rest was history. People like to blame this mishap as to why Magnum P.I. was never going to last long. It was par for the course for the show to end after 8 seasons because, bitterness aside, Selleck’s first marriage suffered because of how long that he spent filming in Hawaii. He is gracious enough to say that Spielberg & Lucas held the offer out for about a month, but the more that they held out and talked to the network, the more that the network said no. Supposedly, Harrison Ford was cast three weeks before filming began on June 23. CBS should have been told how long that the production would approximately last. 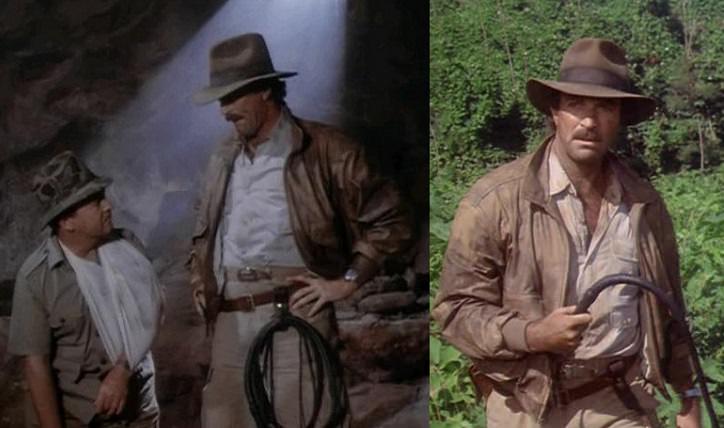 As it turns out, filming of Raiders of the Lost Ark ended on October – more than enough time for Tom to fulfill his commitment to CBS. I suspect that Spielberg didn’t barter hard enough with the TV producers for the securement of Selleck because he knew that Raiders of the Lost Ark would be a box office hit if it had a more recognizable star in the form of Han Solo, who Selleck seemed Hell-bent on rivalling when he was eventually cast in a Sci-Fi cop movie titled Runaway. It wasn’t exactly bigger at the box office than Blade Runner, that’s for sure…and Ford’s movie was a flop. Yeesh! Years later, Selleck would find solace in the fact that Three Men and a Baby was the domestically highest-grossing film of 1987. It also became the first Disney movie to gross over $100 million on home turf.

Spielberg once said that while Raiders of the Lost Ark would’ve been a funnier movie with Selleck, it wouldn’t have the humanity that Ford imparted. Spielberg comes off as hypocritical given that you could say the same thing about Michael J. Fox when compared to the actor that he had replaced for Back to the Future. The thing that I have learned the most about Spielberg is that he is more financially minded than people give him credit (or criticism) for. Example: he preferred Chris O’Donnell over Will Smith for Men in Black because Chris had higher net-worth due to having played Robin in Batman Forever whereas Will, despite having plenty of sitcom experience, would only become an A-lister when Independence Day was released three weeks after Men in Black had finished filming.

Six years before Raiders of the Lost Ark, Spielberg supposedly didn’t want any famous names in Jaws because memories corrupt the story by decreasing the believability and unpredictability. Realistically speaking, his desire for the casting was more to do with any given movie star having more power than him at that period of time. As the main producer and writer for Raiders of the Lost Ark, Lucas should’ve stuck to his guns by not having Ford since it takes away from his diversity as a storyteller. Typecasting had plagued John Hughes since his first five teen movies were supposed to take place in the same town. It’s fitting that his final teen movie took place in Los Angeles after Molly Ringwald turned it down. Once Lucas had cast Ford, those proverbial guns went into the holster and Spielberg could easily patronize him.

For Spielberg, it would’ve been good to have Selleck because Ford’s involvement puts too much emphasis on this being a Lucas project. After all, Lucas didn’t want critics to see Ford as the De Niro to his Scorsese. As for why Steven was so desperate to cast Ford, his own blazing box office streak was cooled a bit by 1941 not being huge like Jaws and Close Encounters of the Third Kind. Granted, the movie had succeeded in grossing three times its cost but it was still seen as a disappointment considering that the success was more to do with international grosses instead of domestic revenue. Also, his failure to make a big comedy hit was emphasized by his inability to take advantange of Dan Aykroyd and John Belushi teaming up together after working on Saturday Night Live.

Spielberg once hinted that 1941 would’ve been directed by Robert Zemeckis had that guy not flopped with I Wanna Hold Your Hand (1978). If 1941 had flopped with Zemeckis attached as director, Steven wouldn’t have tried to overcompensate when finding an actor to play Indiana Jones. The Legend of the Lost Art episode of Magnum P.I. is a better indicator (than High Road to China) of what would’ve happened if Lucas had it his way. Clearly, the interactions between Indy and Brody would’ve been even funnier as can be seen when Magnum interacts with Higgins. While Selleck had about as much experience with comedy as Ford did prior to the making of the first I.J. movie, being in a funny TV series would’ve given him the advantage over Ford when it came to The Last Crusade. This is the advantage that enabled Michael J. Fox for BTTF. 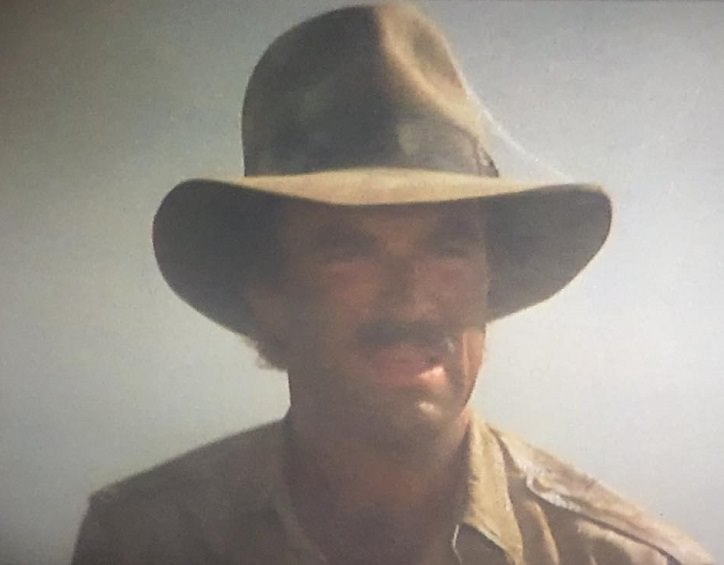 Let’s face it – Selleck looks more like he could be the son of Sean Connery. Had Selleck played Indy, people would be talking about preferring him over Ford as an everyman like they do with Fox as Marty McFly. There would also be less people admonishing Tom by saying that he’s too TV to be a film star. If Fox wasn’t cast in BTTF, this criticism could easily have been applied to him since Family Ties was shot on video. It’s become common for someone to say that they can’t picture anyone else in a certain role. Many people have said this about Selleck as Indy but Jim Steranko didn’t have a difficult time picturing him when he was employed as a conceptual artist to design both the character and the production. This reminds me of the pre-production storyboards for BTTF, but that’s another can of worms that I’ve already opened.

Howard Kazanjian (the main executive producer for Raiders of the Lost Ark) opens this can of worms: “George was suing Universal for Battlestar: Galactica, because many of the characters ripped him off. Glen Larson was the producer who not only has ripped George off, but a lot of other creative people. That’s documented. We know the film is a Paramount picture, so George personally is suing Universal and Glen Larson. Glen is the producer on the Tom Selleck television show – Magnum: P.I. We knew that a strike, an actor’s strike, was going to happen. It was inevitable, just like the writer’s strike we had a year ago. We said to Universal – give us Tom Selleck for this picture because we’re making it in England, not under SAG but under Equity, so we can keep working during the strike. Then by the time the strike is over, you’ll get him back, and he’ll have a great picture under his belly. They wouldn’t do it.”

Spielberg was still working for Universal. He should’ve helped Lucas cast Selleck like how he helped Zemeckis cast Fox as Marty. I suppose that it could’ve been worse; we could’ve got a scenario where Selleck is fired after a month of filming, which would definitely have tarnished anyone’s perception on his ability to play the role. Come to think of it, very rarely does a casting director get punished for miscasting an actor. In fact, you don’t get to read too many stories of casting directors being blacklisted. The actors and the directors become the scapegoats, such is the significance placed on box office profit. It’s a telltale sign that Spielberg once said that the only time which he ever knew that success would be through the roof for any of his films was the Indy franchise. You can bet that a lot of it was to do with the face value and name recognition of Ford.