I feel sorry for Gary Daniels. He should have been a mainstream movie star. He could easily have played James Bond. This article consists of archived web-pages from his very old web-site, which was memorable for how he advertised himself as a personal trainer. 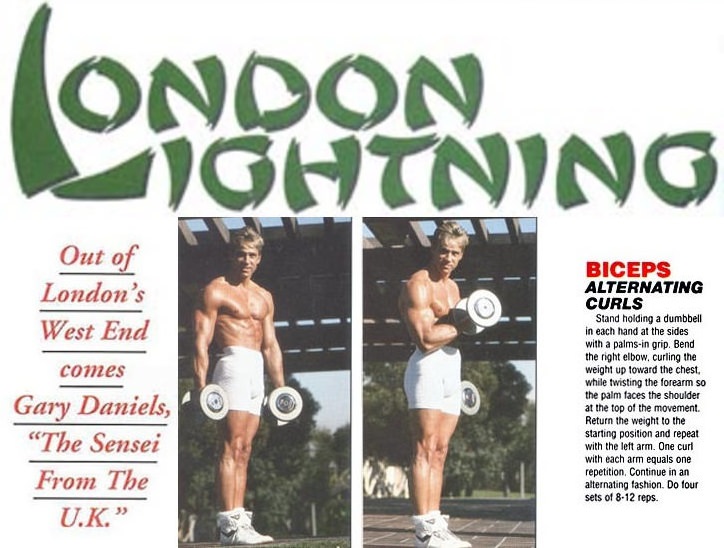 Hey, all you Gary Daniels fans! Have you ever wondered what it would be like to train with Gary? Gary, himself, is offering training and workout sessions all throughout Orange County, California!

Vamoos, Van Damme. Step off, Steven Seagal. England’s latest royalty is the new king of action heroes: London Lightning, Gary Daniels. The sensei from the U.K. has already worked in several hardcore martial arts films in Hong Kong and the Philippines. He is currently kicking his way to the top of Hollywood’s “A” list.

Gary was an average eight-year-old, reading Marvel comic books and going to the movies in his native London, when he saw a preview for Enter The Dragon. His eyelids stretched wide as he soaked in his first view of the late, great Bruce Lee flying across the big screen in an acrobatic fighting frenzy. 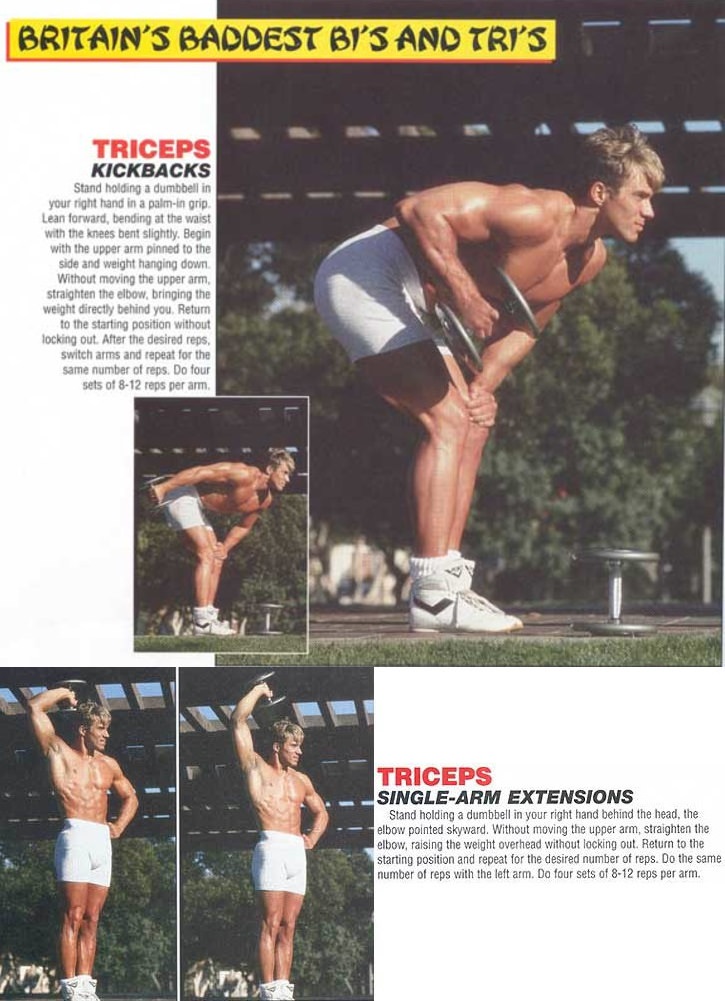 “Since that day, I knew the rest of my life would be dedicated to martial arts,” he recalls. The very next week he began taking lessons and never looked back. Now he has come to master Tae Kwon Do, kickboxing, and most recently, Siu Lum, which is a combination of various Chinese fighting techniques.

“After Bruce, I have a few people to thank for their inspiration and instruction. Mickey Byrne, a boxing champ in the British Army, took me to new levels of training. I’ve been studying under Winston Omega for the past seven years, and Scott Hays, a nutritionist – he has taught me a lot.” 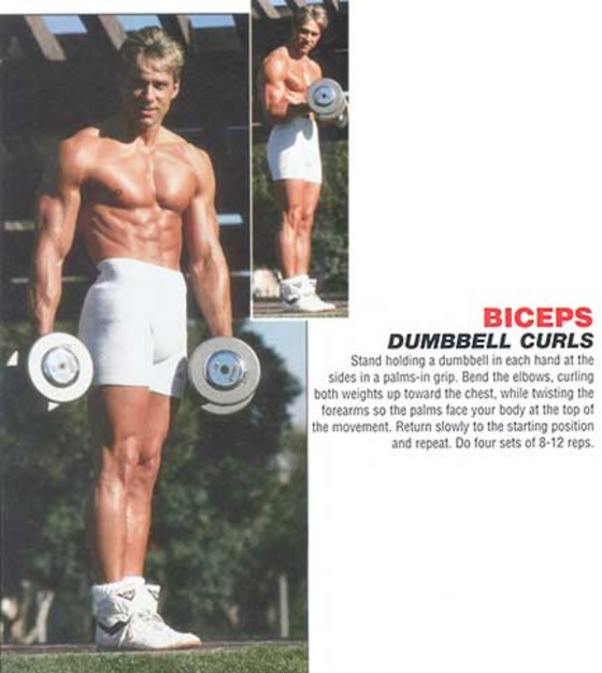 Daniels has achieved physique through a lifetime of hard work and listening closely to his teachers. Just what has he learned? Well, he hits the iron with three-days-on, one-day-off split, hitting two body parts a day. He also spins a stationary bike four days a week in the morning and abuses a heavy back four evenings weekly.

He tries to eat every three hours – seven ounces of carbs, 4-5 of protein and unlimited steamed veggies. He washes his meals down with only water or herbal tea, and his last meal of the day is a salad.

This iron-wielding martial artist gets added punch power using the arm routine. It’s a formula that’s worked, enabling him to pound his silver-screen enemies harder than ever. Keep Daniels and his training in mind when you are working out. Perhaps you will someday be the subject of an article, like this one, that begins, “Get lost, Gary Daniels!” 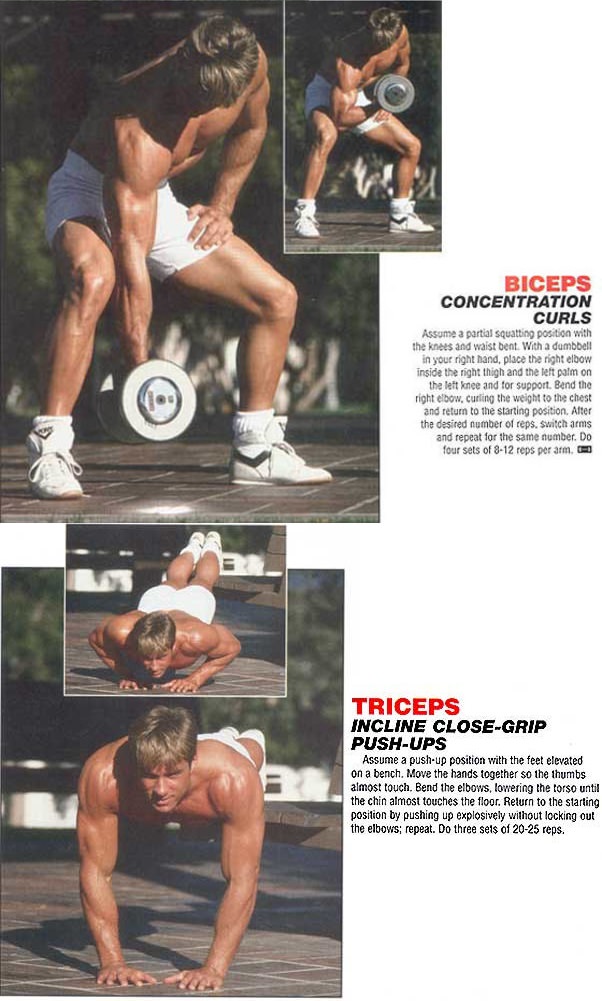 To add to this, there’s an interview that he did for the December 1998 issue of Martial Arts Illustrated (a British magazine) where he talked about…

2) Rope: Jumping rope is something I do, especially when I’m kickboxing, and that can help anybody because it’s a great all-around fat burner and muscle toner.

3) Resting: If I wake up one morning and I feel over trained or really tired, I’ll take the day off if I ever get in that condition. When I came to California, I really did get more into weight training mode. I’d been overtraining with weights. A lot of people told me at the time that I was doing too much and that I had to cut down to maximize my growth potential. But I didn’t understand it at that time because I felt that every time I came out of the gym, I had to be tired – that was the only way I felt like I had a good workout.

4) Diet: When I came to California, I met a guy named Scott Hays who’s a nutritionist. I spent six months with him and he taught me about diet, and I really realized at that point that diet is 90 percent of the look that you’re going to get. You know, he didn’t change my training, but he totally changed my diet, and that made a large difference in my life.

5) Flexibility: Obviously, stretching is very important. In martial arts, we emphasize stretching because we do a lot of kicking. But stretching can help everybody, not just martial artists. I mean, if you’re very tired and you wake up in the morning and you yawn, you can pull a muscle. If you’re reaching up to grab a can of food out of a cupboard, you can pull a muscle. So flexibility is important in all aspects of life, especially to athletes.