The truth about High Risk

A lot has been made about Jackie Chan being lampooned in High Risk. It’s one of those divisive classics which has more truth as time goes on. By the time that it was 1999, he wanted people to think less of the movie. Awareness was on the verge of happening because Jet Li was on his way to becoming a Hollywood action movie star. All it took would be for someone to do an internet search by typing “Jackie Chan Die Hard” and Jackie would be confronted with lots of questions by ruthlessly inquisitive interviewers. In 1999, Jackie decided (as early as February) that he was going to be in his own take on Die Hard so that people come across his movie instead. I can sympathize with him putting the project on hold so that he could do his cowboy movie (Sammo Hung cried when Jackie confronted him about his Jet rip-off as reported in the 1999 revised edition of Jackie’s autobiography), but he definitely should’ve delayed Rush Hour 2 and The Accidental Spy to make Nosebleed. 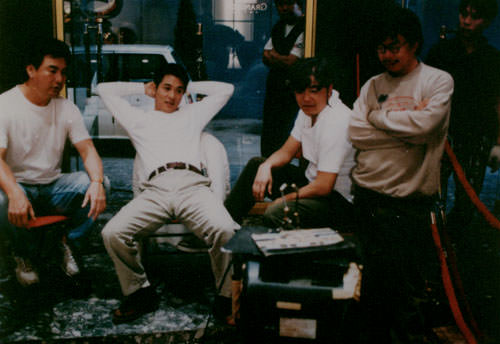 With this particular action comedy, he would’ve been one of the producers and writers (supplanting existing material in the script by Stu Zicherman and Raven Metnzer). He was to play a window cleaner at the World Trade Center who takes a fancy to a waitress who works at the Windows of the World restaurant at the top. The pair subsequently get caught up in a plot to blow up the building. This project never happened – not just due to 9/11, but he was busy with The Tuxedo. It’s a shame because the movie had the potential to be The Raid of its time – a mixture of Die Hard and Bruce Lee’s Game of Death. Jackie thought that there was a character in Nosebleed that was appropriate for Sylvester Stallone. He made the suggestion to the film company (MGM) but they rejected the idea because Sly’s career was going down a slippery slope. Likewise for Jet before he was in High Risk. Coincidentally, there is a chapter titled High Risk in I Am Jackie Chan: My Life in Action (1998). 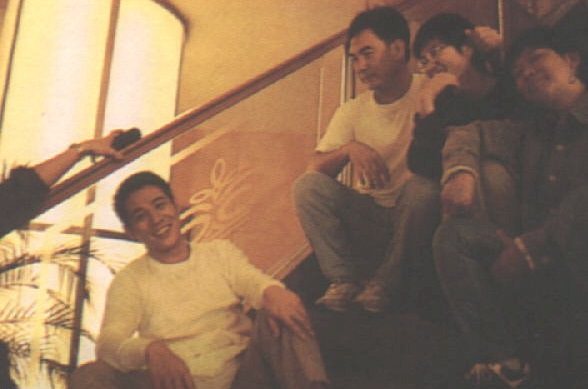 Nosebleed might not have been the most well-written since New Line Cinema sold it to MGM in 2000. The project was already in bad taste because there was a WTC bombing in 1993, alas the movie was going to have a budget that was somewhere in the region of 50 to 60 million dollars – a whole lot more money than the original Die Hard. Still, with all that cash to spend, it can’t possibly have been more satisfactory in terms of action and comedy than Wong Jing’s High Risk. I actually think that Jing’s movie is superior to Die Hard because the movie is less than two hours long yet accomplished more by covering three redemptive character arcs along with a healthy dose of three-dimensional comedy and risky action of a more diverse nature that makes the Bruce Willis movie look generic. Even though the movie has been described as a satire about Jackie, it’s more of a parody towards martial arts movies and action movies in general. Not that any of this mattered to the star who was being roasted. 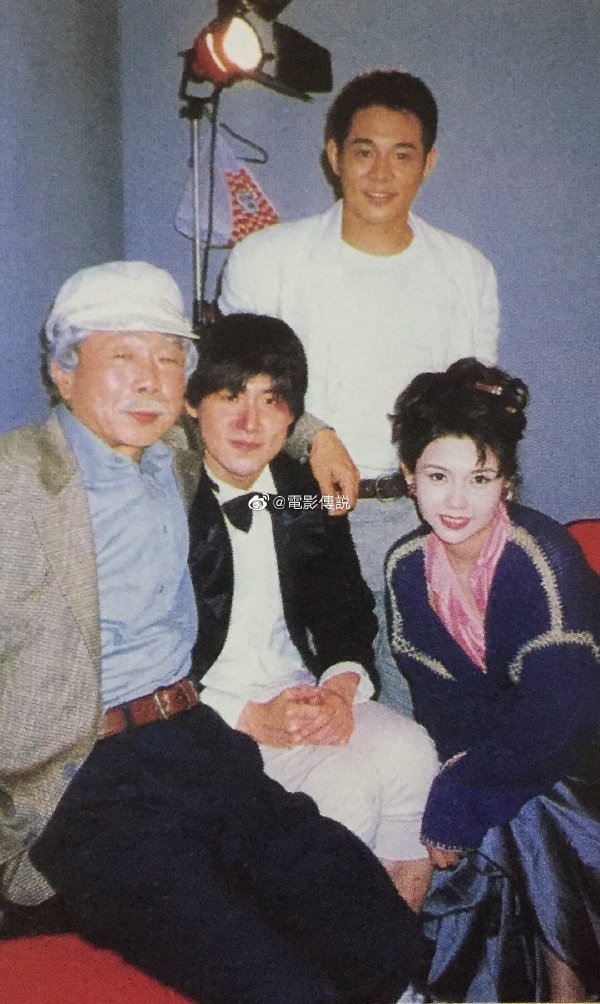 Near the end of 1999, fact made art less slanderous when it was revealed that he had an affair with Elaine Ng. Despite himself already having a family, she gave birth to his child. Being an unwed mother has more of a stigma in the East than it does in the West. The scandal had been an impediment to the success of Who Am I? in Japan. On October 11 (a Monday) in 1999, Jackie was confronted by a horde of Japanese reporters who demanded to know the truth. You have to bear in mind that this is the same country where Dragons Forever (1988) had flopped because he was playing a lawyer (they are even more reviled in Japan than in America). On October 12, the reporters had a field day when they dug up old files on Elaine – she had stripped and posed for the Hong Kong edition of Playboy after winning the Miss Asia title in 1990. Her pictures were splashed in the papers for all to see, so much for the conservative stereotype that is often fostered in the West. This particular Tuesday was worse for Jackie than the day before. 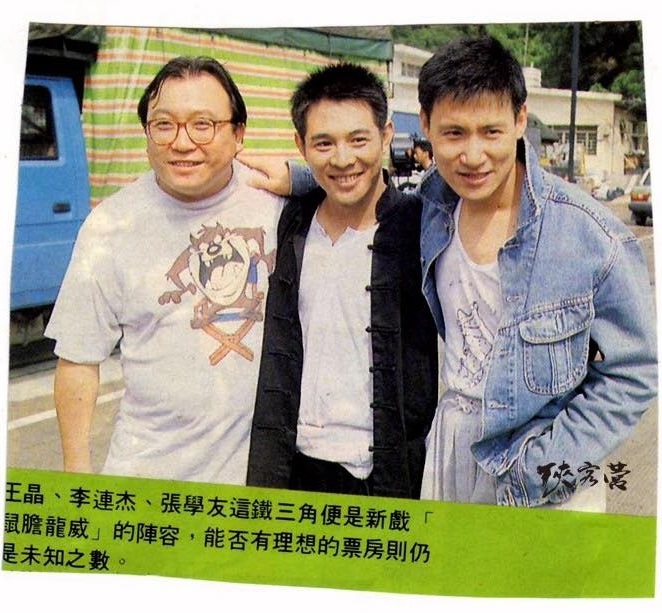 Especially since a H.K. reporter had managed to make a long-distance phone call to his wife. Joan Lin Feng-Jiao, a Taiwanese screen idol who was then living in Los Angeles, had declined to comment but was heard shrieking over the phone moments later. One of the most controversial elements of High Risk is that Jackie is portrayed as getting frisky with his manager (a gay man named Willie). Jackie’s sexuality was alluded to when (on Saturday, October 16) Elaine was interviewed on Carol Cheng’s talk show. She claimed that she fell in love with him for his offbeat dress sense – wearing a pink suit with white shoes or in assorted colours as if he had returned from Hawaii. She had first met Jackie in 1997. She had a boyfriend then but Jackie was classy enough to not make advances. After they split up, she hooked up with Jackie because she had never met a man like him. When Carol asked if he was the father of her child, Elaine became so overcome with emotion that all she could do is respond visually by nodding her head. 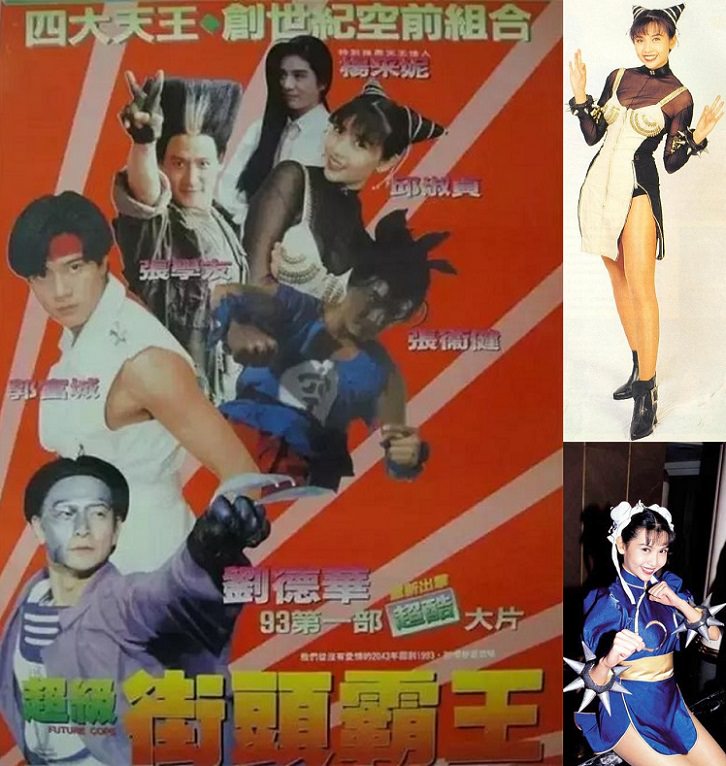 Future Cops (1993), the Chinese Street Fighter, is the sort of daring lampoon which had foreshadowed High Risk (1995) – testing legal boundaries with Jacky Cheung playing one of the main characters. As vicious as Jing was for blithely lampooning Chan, he refrained from making fun of his mother. His father deserved the ridicule because he was stricter. Also, it does make Papa look bad that he defended his son by saying that a blood test needed to be done to prove the paternity of the baby. Granted, Elaine was seven months pregnant in October but she had no doubt as to who the father was. Veronica Yip, a more salacious actress, defended her when she was interviewed by H.K. papers. Miss Yip condemned Jackie. The more that Jackie was vilified, the more that Jet Li’s guilt was alleviated. High Risk is a pivotal example of why he came to prefer working with Jing than Tsui Hark. The snake throwing scene is nothing compared to the animal abuse in Once Upon a Time in China III. 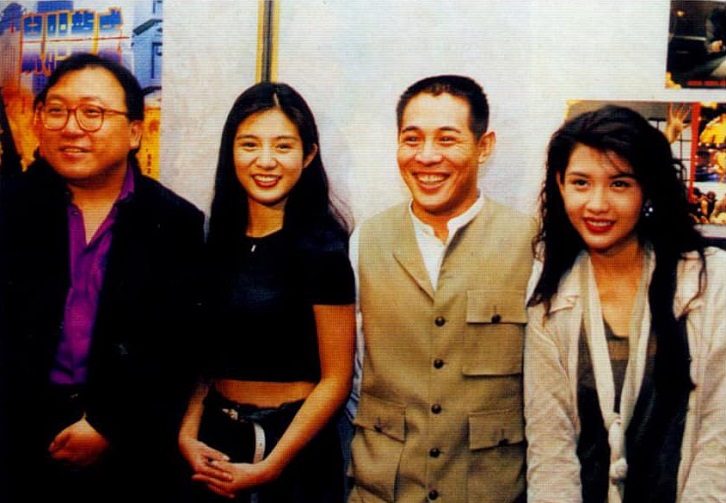 The biggest irony of 1999 is that people started to realized that Jing wasn’t out of line by portraying Jackie as being harsh towards his stuntmen. On the penultimate day of March, prior to when Gorgeous finished its run at the H.K. box office, a documentary titled Jackie Chan: My Stunts was released. It is famous for Ron Smoorenburg being lambasted by Jackie for not having the necessary rhythm to make the final fight in Who Am I? work. Sure, Ron got doubled by Brad Allan (who was in Gorgeous). However, Jackie had to get doubled for the building-to-building jump in Rumble in the Bronx (1994). I feel sorry for Ron because My Stunts stigmatized him and stopped him from being seen as the Western equivalent to Ken Lo – who Jackie fought at the end of Drunken Master II. Speaking of Ken, November 11 (a Thursday) was when he had a wedding dinner where Jackie got a bit too drunk. After drinking, Jackie made a shocking statement while singing on stage: “Next month, I’m throwing a full moon dinner.” 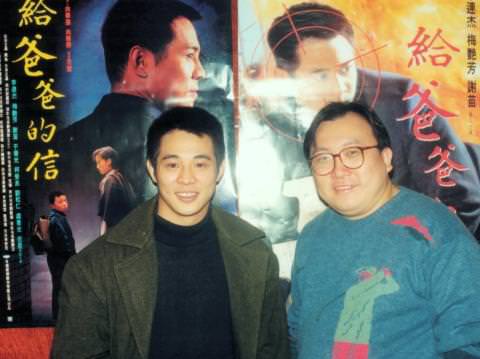 This is a Chinese custom to celebrate a baby’s first month. The wedding guests were left in shock. Some laughed at him for getting the date wrong, as Elaine’s child was due only in January. On November 18 (the next Thursday), his words were prophetic as around midnight, she checked into a hospital to deliver a premature baby girl through a Caesarian operation. As Jackie said about drinking in early 1999 – Water can help a boat sail but it can also sink it. While there was a time when most fans preferred My Father is a Hero (above) to High Risk in terms of modern Jing/Jet collaborations, this has changed. Even Jackie agreed (albeit indirectly) when talking to Winnie Chung for the South China Morning Post in February of 1999: “It is tough. I’m not like others who can have so much freedom in making their films. We all know dirty jokes are the funniest and violent scenes are always easy to shoot. Making an action film without violence is really difficult; staying away from dirty jokes is not easy.” 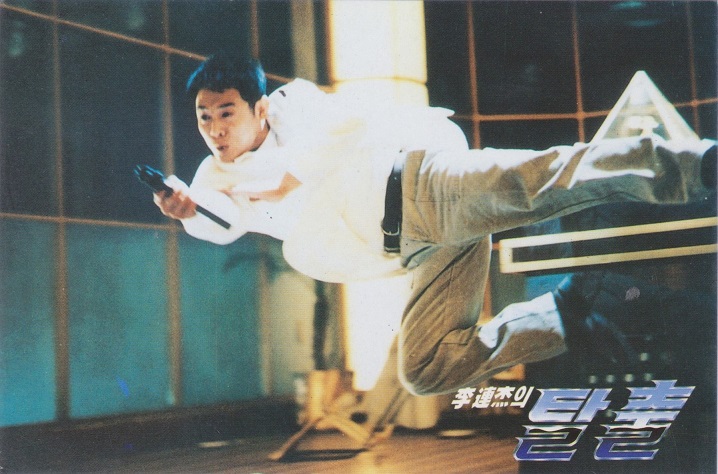 The scene in High Risk where Jacky Cheung is at the hotel dressed in a tuxedo top with blue jeans (and in shorts later on) is a reference to when Jackie Chan arrived at the Penisula hotel after Drunken Master made him Hong Kong’s biggest martial arts movie star. When he arrived, he was dressed in inadequate clothing as a way of getting revenge against the manager – the sort of patronizing jerk who would have thrown out Jackie beforehand for not adapting to the hotel’s dress code. Speaking of clothing, the caricature’s trademark fighting gear is Bruce Lee’s Game of Death suit because Jing wanted to make a point about how both men essentially became drunk lotharios. Another martial arts star who Jing made fun of was Jean-Claude Van Damme i.e. Billy Chow’s hairdo in High Risk was modelled after Van Damme’s mullet in John Woo’s Hard Target.