Jet Li’s girlfriend, Nina Li Chi, had quit show business in 1992 to go into the mainland Chinese property development business. She knew that there would be inconveniences if they were both working in films, but she was said to have lost U.S.$ 10 million (H.K.$ 78.5 million) when a project failed. This is what motivated her boyfriend to move away from H.K. cinema towards U.S. cinema. Their loyalty to each other paid off, since they got married in late July of 1999 – after his second Hollywood movie (Romeo Must Die) was completed on July 23. When he was going to drive her to their L.A. home after the movie’s completion, she called shotgun. How apt, since that they were going to have a shotgun wedding. He impregnated her when the film began filming in early May. Before filming his first Hollywood movie (Lethal Weapon 4) in 1998, his boss was a H.K. film producer named Charles Heung. Fastfowarding to July in 1999, both of their wives had described Nina’s foetus as a millennium baby. 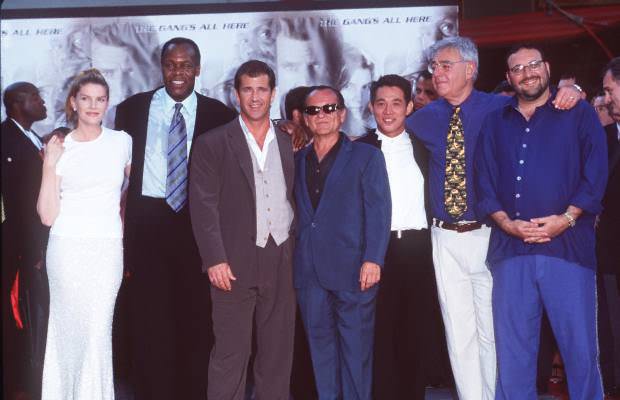 As you can imagine, Jet had more riding on the success of his Hollywood début than Bruce Lee did for Enter the Dragon in 1973. Unlike Jackie Chan after the success of Rush Hour, Jet has never been one to say a bad word about Lethal Weapon 4. Even John Woo has often made polite criticisms of Hard Target. In that respect, you could say that Jet is following the example of Chow Yun-Fat being mindful of what to say about breaking into the U.S. market with The Replacement Killers. What allowed Jet to become a more successful Hollywood player than Chow is that his face was added to the Lethal Weapon 4 poster at the last minute. Originally, he wasn’t meant to be on there but a preview audience had responded so positively to his character that Joel Silver knew that he was onto something as a producer. When the subject of Jet’s English is brought up, it should be known that he went to America to study it in April of 1997 – a month before Tsui Hark began filming Knock Off without Jet.

July was a most interesting month – Knock Off finished filming with Jet’s lackluster replacement (Michael Wong), Jet began filming Hitman (a downsized budget had meant that Stephen Tung replaced Gordon Chan at the last minute) and Miramax purchased the rights to some of Jet’s movies including My Father is a Hero (which was meant to be released in U.S. cinemas in 1998 but it would end up on DVD in 2000*). Quite a few of the U.S. buyers were bidding for it because, unique fighting aside, it was a serious movie where the characters were more human. More importantly than any of this was the screening of a 1996 movie at the 20th Annual Asian American International Film Festival in New York. Black Mask (where he played a masked crusader) was chosen by the committee as the opening and closing film. Jet had attended the festival. Word had gotten round to Silver, who knew that the time was right to take part in the Asian invasion trend (e.g. Michelle Yeoh in 007 #18).

When Joel approached Jet to play the villain, Jet said that he wouldn’t do it unless Corey Yuen was the fight choreographer. The series director, Richard Donner, and some of the executives weren’t too sure about this until Joel screened them a print of My Father is a Hero. 2 weeks later, Jet accepted the role. On Monday, December 22 in 1997, Jet flew to L.A. to prepare for the sequel – which he chose over four offers…including playing the villain in Blade. The Warner Brothers film studio rented a place for him and even hired a Chinese driver. According to Jet, Chris Rock’s scenes were filmed first to adjust to his schedule on Kevin Smith’s Dogma in the first half of 1998. Filming began on January 8, but it was only in the beginning of February that Corey flew in to be the martial arts director. It makes you wonder if Jet rejected Wesley Snipes because New Line Cinema didn’t find it necessary for a H.K. fight choreographer to be flown in. The Matrix, which was released a year after Blade, would’ve looked bad.

It was only after the lucrative trend-changing success of The Matrix in 1999 that we finally got to have a Blade movie where there was a H.K. fight choreographer. The Chinese guy being Donnie Yen instead of Corey. After the stateside success of Jackie’s Rumble in the Bronx in 1996, some film companies saw Jet as the next thing when Jackie proved to be elusive. Like Jackie did when he was in The Big Brawl (1980), Jet didn’t get an American agent because it wouldn’t make sense to sign with one unless there was an actual success story to come out of working in Hollywood. Jet, perhaps harking back to Jackie’s 1997 statements about acting on Rush Hour, said (in a rather diplomatic manner that was meant to reflect H.K. film directors): “Some say making a movie in America is very systematic, but the producers and director of Lethal Weapon 4 are very willing to listen to the opinions of the other actors. As long as the opinions are useful, they will be acceptable. They are very open and democratic.”

The H.K. press refer to Jet’s evasiveness as having Tai Chi skills, although he did say that the director would accept politically correct suggestions from Corey and himself. Lethal Weapon 4 was so successful when it opened on Friday in July 10 that Jet was paid 3 million U.S. dollars, on Friday in July 22, to star in Romeo Must Die. Corey was originally going to direct that until it was decided that having the cinematographer of Lethal Weapon 4 would make for a nicer tie-in. With that logic, they may as well have hired Dick Donner to direct. One thing that went against Corey is that his Shannon Lee movie (Enter the Eagles) had its release date delayed and, when it finally opened in H.K. cinemas, it bombed! It’s ironic because Jet told the H.K. press that Lethal Weapon 4 had a flying paper situation as with H.K. movies. Flying paper is when you write dialogue or ideas to give actors at the last minute. For example, Lethal Weapon 4 had an ending but there was no action finale written.

*  Jet Li’s The Bodyguard from Beijing, also directed by Corey Yuen, was supposed to be released on April 21, 1998 but didn’t for a reason that has never been officially provided.