That is Jean Lukitsh standing next to Donnie Yen. She is a martial arts practitioner who used to do interviews with him for the Kung Fu Cinema site. They know each other via his mother. The words which I’ve enlargened advertise her site. In the main photo of the cover, she was outside a cinema that advertised Drunken Tai Chi (1984). Courtesy of the Daily newspapers with similar names, Ming rhymes with Sing whereas Pao rhymes with Tao, here is a collage of news items essentially advertising the desire for Hong Kong cinemas to not end up like the Peking opera houses. In the last year of independence from mainland China (1996), a news story had emerged in December about how Raymond Wong Pak-Ming’s Mandarin cinema chain had merged with Sun Bo. He explained due to the lack of H.K. movies in recent years that reducing to one chain would be a good thing for both parties. Some people felt that this would reduce the chances of bad quality films being released and, in turn, eliminate the small companies that were in to make a quick buck. 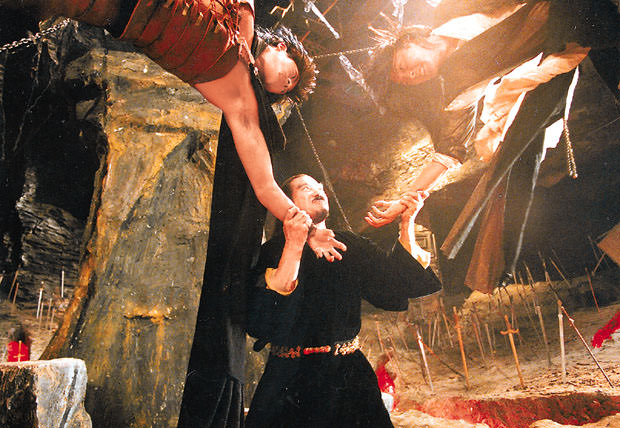 A 1996 Louis Koo movie, Those Were The Days (a.k.a. Man Wanted 2), was the last movie to be shown before the Mandarin chain ended. But, merging with Sun Bo basically meant that Sun Bo possibly may take in some of the cinemas. 1992 was the industry’s golden era. The total box office resulted in the 1,230,000,000 dollar benchmark in H.K. currency. In U.S. currency, that would be over 157 million. In 1998, The Storm Riders performed so well at the box office mainly because the comic book series was popular enough to justify the long-term publicity including merchandising. Even so, one would know (after all the money spent on resources and special effects) that the audience perceived the script as the weakest part of the movie. Film technology is improving, as is the audience. There were still viewers who would go to Yau Ma Tei cinemas to watch Category III films, but there are those who would talk on their phones (not recording audio commentaries) or viewers who would rather watch pirated discs. Video was on its way out, so you can’t blame the H.K. movie industry for eventually switching to digital cameras in case that the cinemas are closed.

Comedy star Michael Hui said: “The American film market is very large, and the overseas market is only 10% of its income. So no matter how much you counterfeit, the effect wouldn’t be too great. Hong Kong film cannot compare to Hollywood film. Take a look at how much has Hong Kong production income declined to. Originally, the predicted box office income was over 10 million, due to the effects of piracy – it’s only 3 million. When a film’s box office income isn’t good then there is no funding. When there is no funding then good talents cannot be hired. Without good talents, film quality will continue to decline. When that declines, there will even be less people watching Hong Kong film. The cycle continues, why not give film makers a chance? One has to know that they don’t get a cent from the pirated disc income. Those who get the money are crooks.” 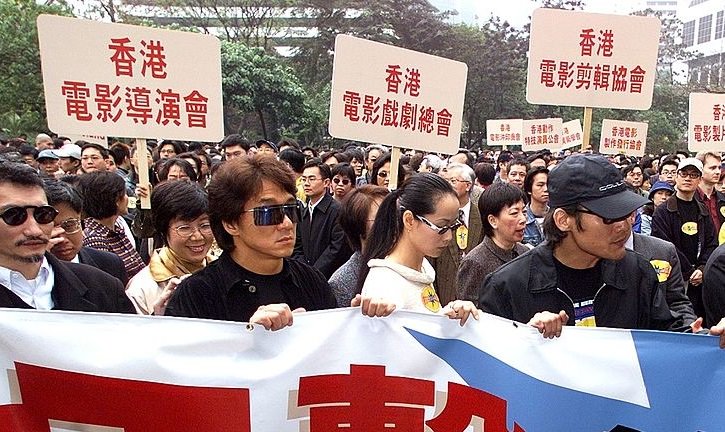 On February 20 in 1999, Commercial Radio host Leung Tak-Man said that some pirates felt that the sound recording in the cinemas was lacking and hired others to dub the film. There was another side to the story – those VCDs were not pirated at the cinemas…those were Mandarin versions. Since Mandarin versions have a limited market in Hong Kong, the pirates hired others to dub the goods. The best recent example was Stephen Chow’s King of Comedy. The writer of this piece, Kwok Hing-Ching, was watching a copy in a shopping center. The experience was quite strange since Stephen specializes in humour that’s derived from the Cantonese dialect. Even stranger was that this version was completely without foley sounds (diagetic sounds in other words). This means that it was like listening to a radio interview or a film voiceover with no accompanying sounds. The award-winning director Ann Hui said: “Since the Taiwanese have stopped investing in or buying the copyright for Hong Kong movies at very high prices, there’s not too much money coming in from Taiwan.”

There is something to be said about history repeating itself. On Friday, January 17 in 1992, it was reported by a Canadian newspaper (Alberta’s Medicine Hat) that Jackie Chan was one of 300 H.K. film professionals who led a protest against the bad Triads (since there are some good ones) on Saturday, January 15. Nothing good came out of it except for four months later when Anita Mui unwittingly set off a chain of events that resulted in a powerful gangster named Wong Long-Wai (not to be confused with Johnny Wang Lung-Wei) being killed. The message was simple: mess with the stars, we will mess with you. On Wednesday, March 17 in 1999, Jackie once again found himself in a march but this was one that was aimed against piracy. His strength in numbers was well over a thousand. The 73 cinemas took it seriously enough that they agreed to close for a day in the hopes of losing an estimated 1.5 million U.S. dollars. Ng See-Yuen, who can be seen in the below photo with a yellow logo, was the chairman of the Anti-Piracy Alliance: “It’s all because law enforcement is not strong enough to stem the problem. Closing the cinemas carries a symbolic meaning – if we do not attack the problems, no films will be produced for showing.” 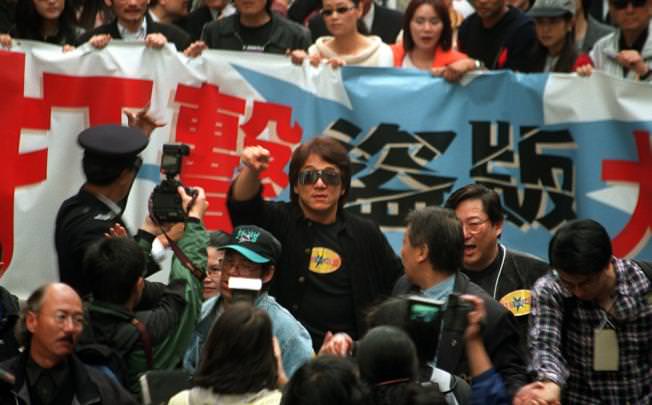 The protest came shortly after a U.S. government agency removed H.K. from a list of places on a watch for intellectual property abuses. In comparison to the smaller number of protesters in the march against Triads, Jackie had stronger numbers because some record companies and film production houses were closed during the march to allow staff members to join the demonstration. Some citizens still feel that though piracy is rampant, each star is worth millions. No one will starve to death. What the citizens see is only the brightest side of the film and music industry. Each industry has different levels, not every film worker makes millions a year. Many still take in only thousands per month. Film industry pays by the movie, not by a fixed payroll. The H.K. unemployment rate was around 6%. In the film industry, the rate might have reached 70%. With less people going to the cinemas, many closed one after another. Ticket sellers, ushers and transporters all had their services been terminated. When video stores closed, another group of people were unemployed.

It’s amazing that the below cinema looks so decrepit. It reminds me of Bruce Lee’s final home which had the potential to be a museum but apathy led to negligence. This image was the reality that went beyond the imagination of people’s heads. On the same day as the protest, Stella Lee reported for the South China Morning Post about how pirates had helped force two thirds of film-makers and actors out of work. Woody Tsung Wan-Chi, Chief executive of the Hong Kong, Kowloon and New Territories Motion Picture Industry Association, said: “We produced 300 local films in 1993 when the box office reached $1.2 billion. Last year, only about 90 movies were produced. There were about 30,000 people engaged in the movie industry in 1992 and 1993. We now have only about 10,000 with the other two-thirds with no work to do or being forced to change their jobs. Box-office takings for local films totalled about $400 million last year – the lowest since 1989 when they were about $800 million.” 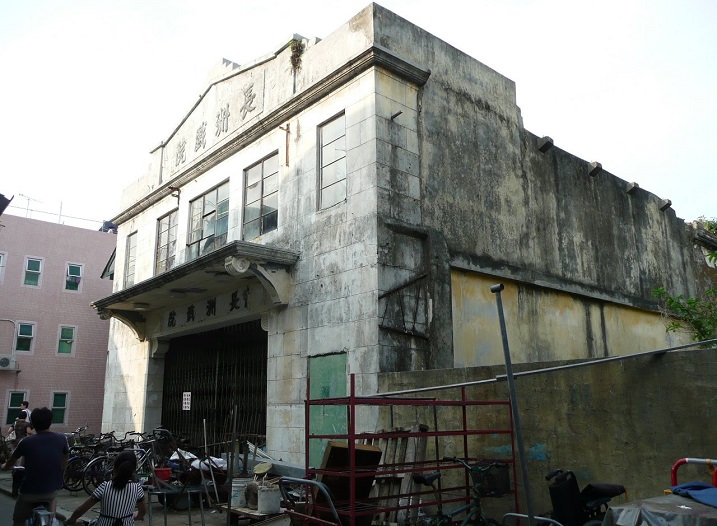 On May 6 in 1999, it was announced that official VCDs were released sooner than before, one such example given was a Leslie Cheung film titled Moonlight Express. When it was released in H.K. cinemas, the Japanese investors publicly complained about a lack of management in H.K. Customs since the pirated VCDs were already available at the same time as the movie’s release. By the time that the official VCD was released, the drastic drop in prices made the pirated version seem less attractive. From another standpoint, an official disc’s quick release would effect cinema owners. Many people have already said, with the exception of movies that have special effects or are worth watching, many would rather wait for the official VCDs. Earlier, when Customs conducted its pirated VCD sweeps, they mistook official discs for pirated ones because of the sooner than usual release dates.