To heck with Zemeckis

While Robert Zemeckis is a commercially successful director, he is a financial failure. Three separate movies point to this. First, there’s Back to the Future. In late 2017, someone had commented on this video* where Christopher Lloyd is sitting next to Bob Gale (the main producer) for a Q&A session with an audience. Given that I have received a lot of attention because of my BTTF articles about Stoltz, it’s important to reproduce a person’s comment because it was influenced by the way that I put my research together. This person’s comment is as follows…

“The body language from Lloyd is very interesting in this. He’s clearly not comfortable about what’s been said. Reading between the lines of what has been said, it sounds like they were running out of time and money to make the movie, so needed an excuse to get more time and money. It also sounds like THEY made the movie too serious…perhaps too dark, and because they didn’t have time or money to finish it right, they realised the only way to get the movie done was to reshoot a load of scenes with a more comedic vibe. The only way to get permission from the studio was to say Eric Stoltz wasn’t working in the role.” 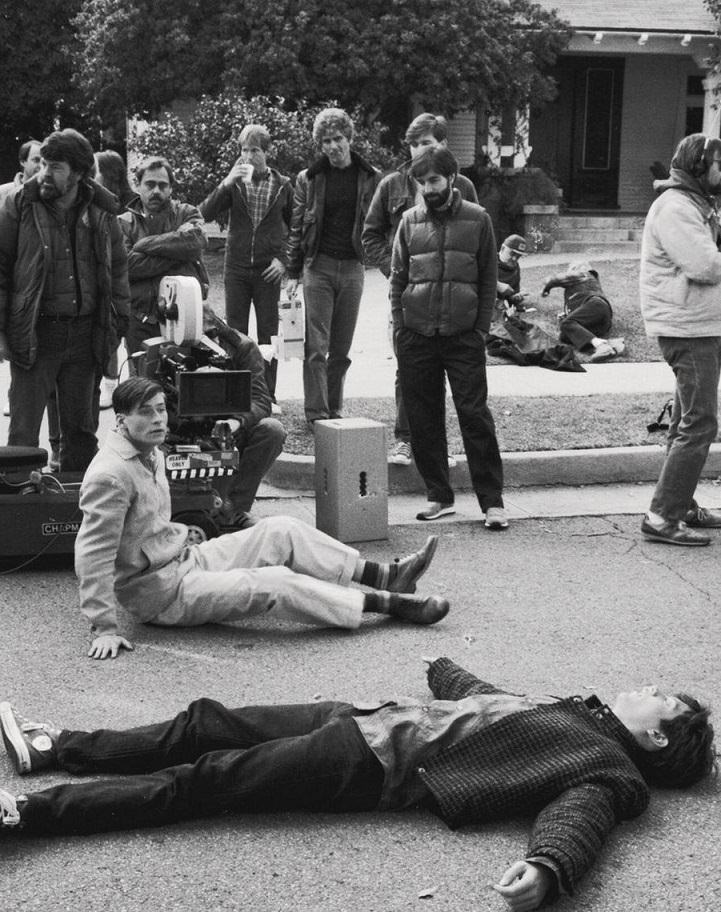 For those who don’t know which lines to read between, the budget had been cut in the pre-production stage. Officially, it meant that they had to change the finale. However, another anecdote revealed that Eric’s final (seventh) week resulted in the producers cutting costs by not filming any of his close-up shots despite the fact that they supposedly wanted to fire him after the previous week. On July 9 of 1985, The Philadelphia Inquirer reported that a rumor had been floating around about Stoltz being a scapegoat because several key shots were bungled early on in the shooting. I, myself, have a theory about what was going on financially. The basis of my theory is Crispin Glover claiming that the last scene which he had filmed with Eric was when Marty McFly sees his new family in 1985. This is fascinating since there weren’t any stills of this in the visual history book.

Going by the accounts of what people have said about filmed scenes, it seems like that prom scene wasn’t filmed because the number of extras would make it too costly. One of the black musicians (Granville Young) has a widow who told me that her husband didn’t film the scene with Stoltz, yet Joel Silver claimed that Stoltz was fired after BTTF was entirely filmed. In an interview with Robert Rodriguez for a talk show called The Director’s Chair, Zemeckis told him that they were already getting prepared to change the fifties sets to the eighties sets before they thought about firing Eric. What corroborates this is that Thomas F. Wilson claimed that the film was nearly done. Finally, a man in the SFX department had described the status of the Stoltz shoot as “basically” completed. This term generally means that it’s not really completed but you can just about wing it.

For example, Raiders of the Lost Ark. Steven Spielberg had to scrap a few action scenes from the script due to financial constraints. The consolation was that they could be used for the sequel. In the case of BTTF, Crispin told IGN that the script was constantly being rewritten during filming. One example is that the skateboard chase was originally going to end with Biff’s car being hit by a train. It would appear that the only way for BTTF to be finished in its then-current form would be to have Marty succeed in being a matchmaker after seeing George punch Biff and reunite with Lorraine. This would mean that a financial restriction might have forced Rob Zemeckis to rewrite the prom night scene so that Marty pulls out his photo and sees that his siblings are completely visible. This would explain why Courtney Gains was surprised about still being on their payroll.

This also explains an anecdote in Tom Wilson’s 2012 autobiography (The Masked Man) about how, during the final week, he had seen Zemeckis take Eric aside in between takes so that they could have long discussions. Getting fired requires one long chat, but saving money requires many of them. The other two times that Zemeckis had bitten off more than he could chew with either time or money were Who Framed Roger Rabbit (1988) and Forrest Gump (1994). The former was always in danger of being cancelled because he kept on missing the deadline (imagine how Chris Lloyd must have felt about history repeating itself). The latter was a worse situation because he ran out of money, and needed Tom Hanks to be his piggy bank. The below photos are from the première of the animated Beauty and the Beast in November 10, 1991. 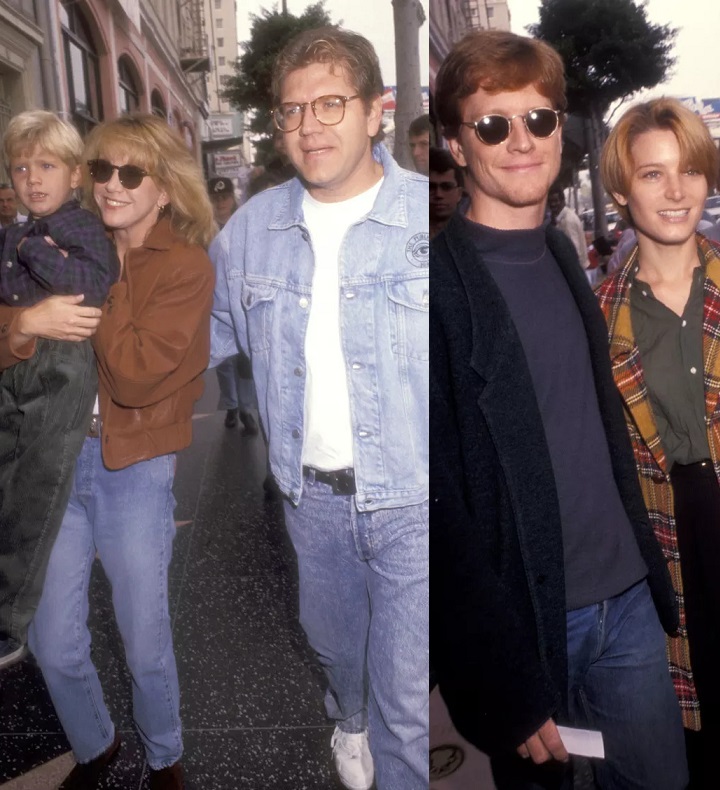 Rob’s wife is an actress named Mary Ellen Trainor. He married her a few weeks after the release of his second flop – Used Cars. She wasn’t in the movie but she would later appear in some of his other movies – Romancing the Stone, Back to the Future Part II, Death Becomes Her and Forrest Gump. She was in Spielberg’s The Goonies, which was referenced in Wilson’s memoir as being expected to be bigger than BTTF. As for the other photo, Eric is with Bridget Fonda. She was his girlfriend at the time. She had just completed a starring role in a movie with his ex-girlfriend. The movie was Single White Female. The ex was Jennifer Jason Leigh. Bridget’s relationship with Eric began in 1990 and ended in 1998, which he had alluded to in his article about being a director (where he claimed that the number of `80s directors who properly directed him could be counted on one hand).

Speaking of which, I asked Jeffrey Weissman if Eric (who he has met) ever told him about how he could have been funny if Zemeckis had actually put him in that direction. I should note that he was referring to Ally Sheedy when he said: “No. I only spoke once with Eric about him living with Ally when we were both testing for the lead in War Games (I couldn’t understand why she was not connecting to me and watching him during my test). Bob Z usually didn’t give a lot of direction. He casts capable talent and then trusts them to do their thing. It’s too bad if he didn’t communicate that it needed more comedy.”

In this interview for Amblin Road, Bob Gale tried to play down the hype that was surrounding Eric’s performance in Mask by claiming that nobody had heard of BTTF when it was first being made. However, a passage in Robert Clouse’s 1988 biography of Bruce Lee makes me think otherwise: “No matter where a film is being made, information about a project can be rapidly transmitted. The easy flow of conversation between artists and executives by transcontinental telephone, and through a million daily lunches, late-night parties and bar talk, starts the process toward a consensus of any given production. When a film is in trouble or going over budget, or if a particular picture has the potential of “flying,” it is soon known. The word of winners and losers seeps through the cracks of editorial rooms, music sessions and sound-mixing studios. A collective knowledge builds until an opinion has been gained. People will nod when a certain name or title is mentioned, though it may be unknown to the public for the moment. Future deals are proposed based on what will surely be, and no one wants to miss the boat.” 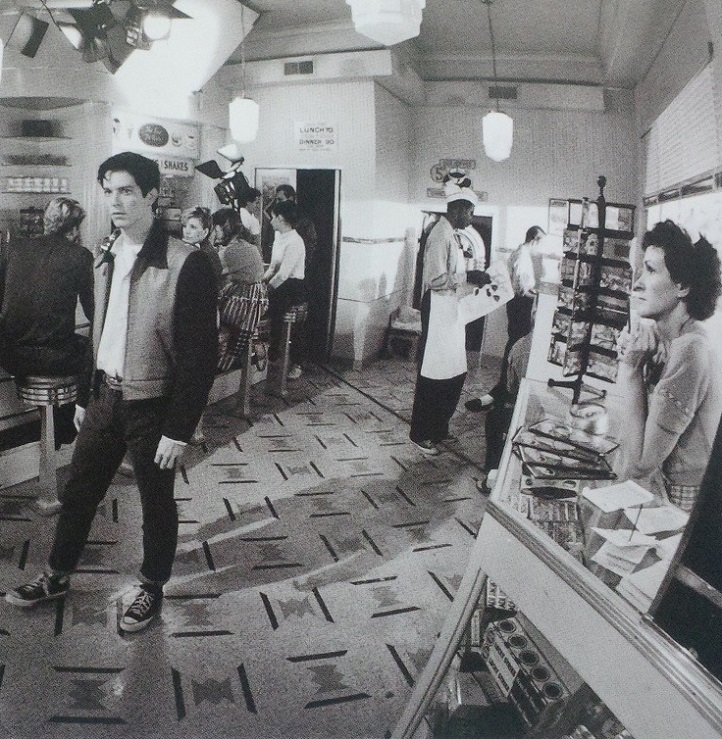 * As of 2019, that video was taken down. It was probably because the uploader was a bit self-conscious in how he positioned the camera, as if he was afraid of being caught. Also, there was some blurriness that resulted in some unkind comments. The Q&A session took place at the Chatham Orpheum Theater in Massachusetts on Wednesday, June 8, 2016. Lloyd’s body language was as follows…