The cover depicts Eric Stoltz in Back to the Future wearing a similar jacket to Anthony Michael Hall in Weird Science. I won’t go into detail about the rivalry between both movies, since I already did that in a 2015 article about how BTTF was originally more of a drama. Instead, I will put together out-takes from my article about people who were fired just because others were more commercially viable. For Weird Science, Kelly LeBrock replaced Kelly Emberg (who can be seen in between Judie Aronson and John Hughes below). This happened in September of 1984. It was the month before Eric was attached to star in BTTF. According to Robert Rusler (who acted in Weird Science), John Hughes had fallen out with the movie’s producer during filming. Looks like Joel Silver is the one to blame for Emberg’s wrongful termination, after all. Hughes would later redeem himself by casting Eric in Some Kind of Wonderful. 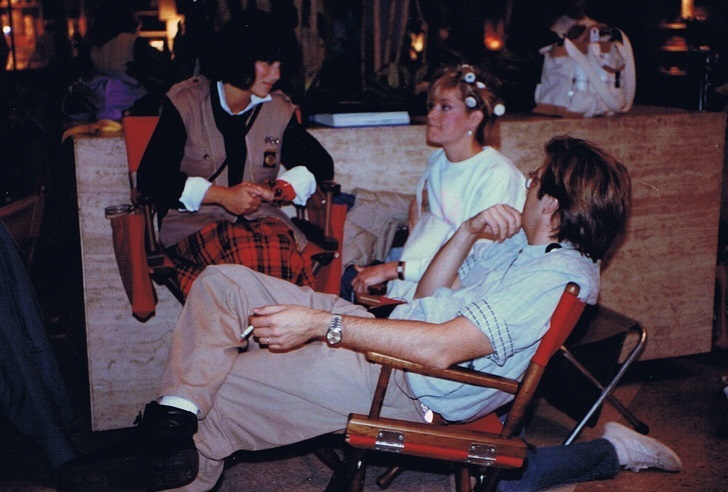 He knew that he unwittingly inspired Spielberg to can Eric. After three weeks of filming Some Kind of Wonderful, John fired the director along with most of the cast except Eric and Mary Stuart Masterson. It was a self-esteem tactic designed to help Eric. The previous director, Martha Coolidge, claimed that Eric was still traumatized about being expelled from BTTF. Eric’s mechanic character was originally greasy, long-haired and eccentric. You have to wonder how much preparation that Emberg (also seen below) needed, seeing as how she was an inexperienced actress. In a 1987 newspaper issue, Eric talked about how frustrating that it was to spend 3 months in preparation for nothing. In Jon Cryer’s recently released memoir, So That Happened, it was revealed that Howard Deutch replaced Martha after she replaced him.

He goes into more detail in his book, but here is the short of it: “They asked me to come in and read with Mary Stuart Masterson. Howie was itching to direct a hotly discussed script of John’s called Oil and Vinegar. Though he was prepping Some Kind of Wonderful, he nevertheless got up the courage to tell John he wanted to direct Oil and Vinegar. It seems John had wanted to direct Oil and Vinegar himself. Then suddenly Howie was fired, and I was out of the picture. Martha Coolidge was hired. Martha oversaw a massive rewrite, transforming it from a comedy about a nerd’s grand gesture to a kind of somber Pretty in Pink re-do. She then brought in Eric Stoltz and Lea Thompson. Well, the tone change was now too much, so they fired Martha and brought back Howie. With Howie too grateful to be back in John’s good graces to rock the boat anymore, he kept Some Kind of Wonderful in its now-serious state.”

This final Hughes teen movie was shut down temporarily due to the firings. This tacky tactic is the only way to get rid of an ironclad-contracted actor e.g. Melora Hardin had signed a contract for a two film deal before she was fired for being too tall to be Mikey Fox’s on-screen girlfriend. The two films were BTTF and a sequel. This would negate what the film-makers said about the first movie’s ending. Then again, they have been proven to be revisionists about other things. Also, the ending is clearly tacked-on for a sequel. In issue 97 of Starlog (August, 1985), it was mentioned that Bob G and Z had already been thinking of doing a sequel. In the 99th issue, Z had mentioned that Christopher Lloyd wanted to do a sequel where he gets to play the villain as well as the hero.

Since Melora never filmed any scenes, it was useless to have cast her. Fans of the BTTF franchise mourn the possibility that the sequels would never have happened had Stoltz not been fired, but let’s be honest…nobody ever laid stake to the claim that Back to the Future Part II is superior to the first movie like The Empire Strikes Back was to Star Wars. When I think about the plagiarism lawsuit that plagued The Terminator, I think about the similar lawsuit that Zemeckis was involved in where a lawyer defended him. It’s never been specified what that lawsuit was about, but it could be argued that Back to the Future is a heavily modified version of a much lauded 1967 Star Trek episode titled The City on the Edge of Forever. In it, Doctor McCoy stopped a woman from being hit by a car after going back in time but it made the Enterprise no longer exist. 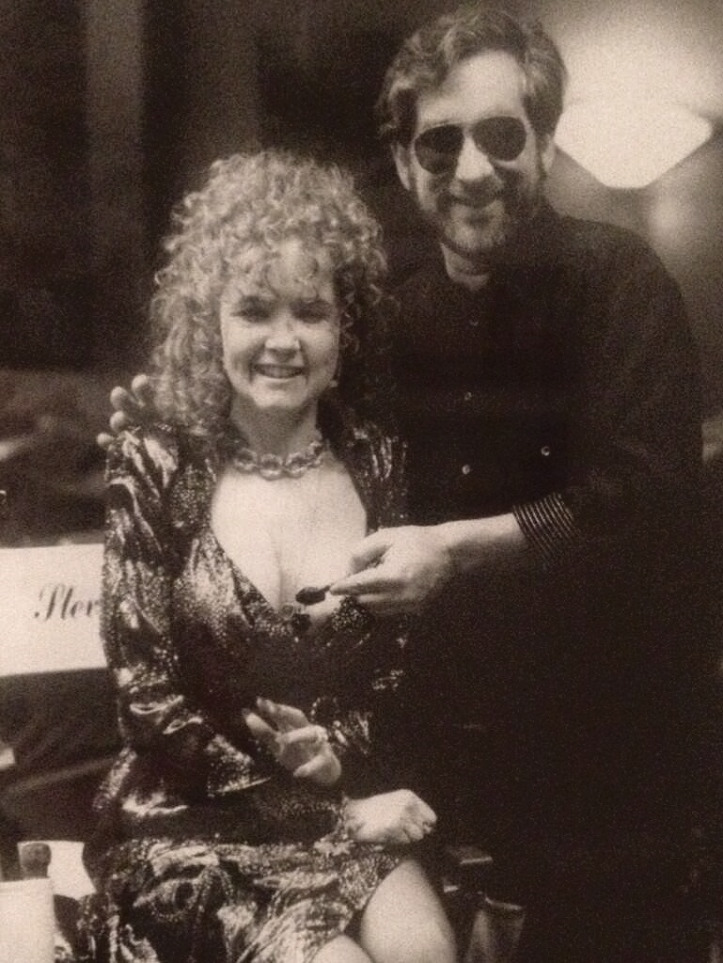 In the 140th issue of Starlog, Eric was asked to talk about the sequel to The Fly where he plays another Marty. Mc is an Irish prefix which means son of, hence the jokes about Martin being the son of a fly. Like in BTTF, he wanted everyone to refer to him as Martin; he even referred to Jeff Goldblum and Geena Davis as his parents. He responded to a question about the first two BTTF movies: “The sequel will all make it clear as to why I wasn’t in the original film. The professor and the kid go back to the period when I was in the cast!”

For those who are struggling to comprehend what he’s insinuating, he means that part of the attraction behind the first sequel was seeing an alternate version of what happened in 1955. Like what had happened with the previous film, shots not featuring Eric were used to cover expenses. Also, bear in mind that his version had a different screenplay which added to the feel of watching something old that was new. He was set up to fail. If Lionheart had been released in the spring of 1986 as originally planned then maybe John Hughes would not have found it necessary to bolster Eric’s confidence. 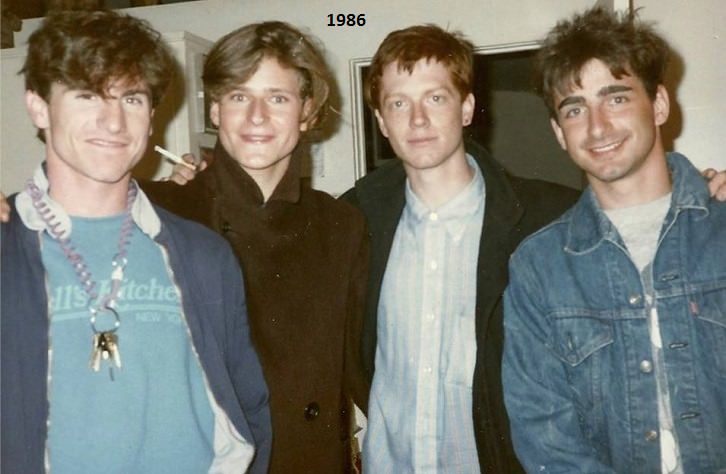 I should digress somewhat by pointing out that Eric used Starlog to prove that he did have a sense of humour by proclaiming that he would like to act in a musical comedy. Outside of the Starlog community, very few people knew about the BTTF sequel already being planned. In 1989, Zemeckis denied it to hide the blatant fact that Eric’s withdrawal from BTTF was commercially motivated. Like BTTF, Some Kind of Wonderful was originally an experiment by a director to have an edgier protagonist. There are nods to BTTF because John wrote it with Eric in mind. Yet again, Eric plays a rebel with brown hair who has trouble starting his car. He even has a love interest played by Lea Thompson. The name of the other interest, Watts, is reminiscent of gigawatts.

There’s a character who is credited as Skinhead. As others online have said, he could (and should) have been listed as Duncan. This is reminiscent of Lori Petty playing a character named Brandy but being listed as Hooker in a 1985 episode of The Equalizer (i.e. The Lock Box). In the original screenplay of Some Kind of Wonderful, Susan was the forename of Watts. Marty McFly’s girlfriend, Jennifer, was originally named Suzy. There’s even a scene where Eric leaves the family dinner table after he offends his parents. Also, Eric once again finds himself pushing a bully and being restrained by bullies. As would later happen with The Fly II, the ending was reshot. 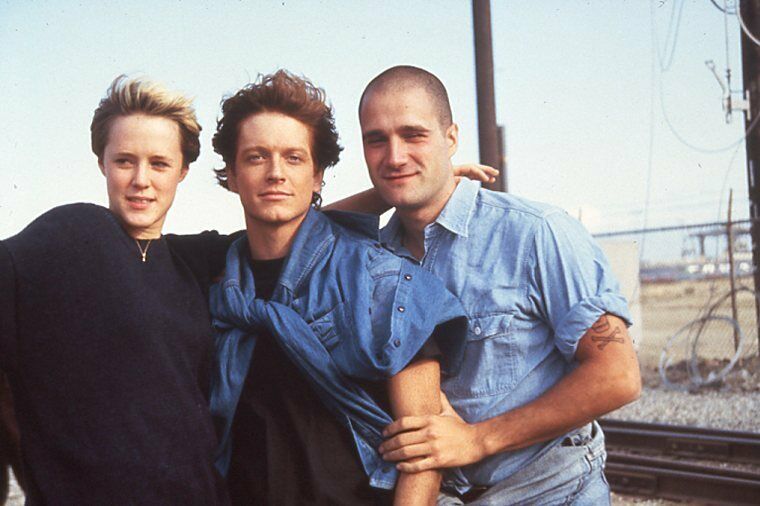 BTTF was made at roughly the same time as Universal’s Weird Science. In a 2014 interview, Ilan Mitchell-Smith (the actor who played Wyatt) claimed that Eric stole a studio back-lot cart and invited him so that they could harass a tourist tram for half an hour. Ilan accepted because they got along previously during the making of The Wild Life. The tram fiasco could not have gone unreported. From a public relations standpoint, it wouldn’t be good if Eric still worked with Universal. It’s just as well that John Hughes had stopped working for Universal after Weird Science, because they may have been reluctant to have Eric star in Some Kind of Wonderful.

A quote from Billy Zane makes Eric’s firing seem hypocritical: “I had a crash course in Hollywood, being on the back lot of Universal for about six months. It was the best playground on the planet. Michael J. Fox was very funny. He would play dead on a New York street, lie dead in the middle of the road, where the trams would come by, and they would have to stop and we’d come running out of the buildings and try to pilfer everyone for their Polaroid cameras and watches, like a highway robbery.” 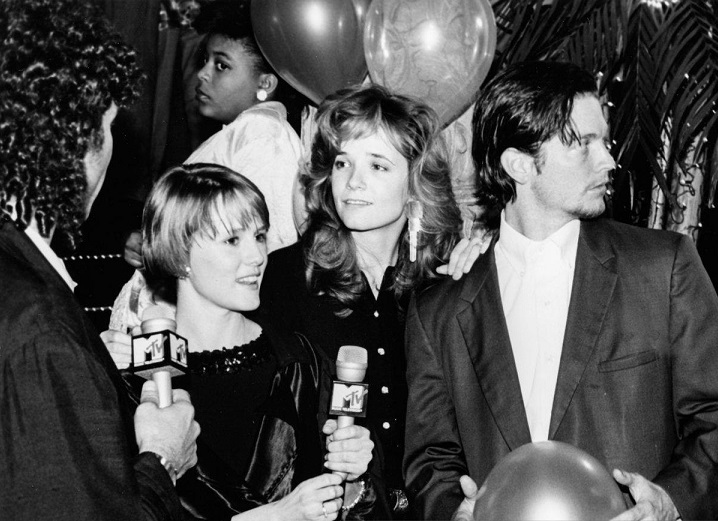 In different U.S. newspapers circa 1985, Zemeckis was quoted as saying: “Eric is a fine actor, and I wouldn’t hesitate to work with him again. There was nothing wrong or bad about his performance. His portrayal simply wasn’t in synch with what I wanted the movie to be.”

Like what someone mentioned here, Zemeckis could’ve redeemed himself if he had cast Eric as Matthew McConaughey’s role in Contact. Like what Gale said, it would be like calling the girlfriend who you broke up with. As for the other `80s Sci-Fi movie where Eric played a Marty, he told Movieline (in 1992) why he wanted to be in The Fly II (1989): “I wanted to be in every category of the video store.”

The movie is especially interesting to note in how they got away with reusing video footage from the first movie by re-recording Geena’s voice. This got me thinking about the videotape scene in BTTF. The position of the camera in correlation with the height of Doc Brown suggests that either Eric or his stand-in is holding the camera. Either way, it’s from the original version because Lloyd’s act does not have a single trace of dorkiness.

As far as the salary arrangement goes, Rutger Hauer’s 2008 autobiography (All Those Moments) helped to shed some light. Two weeks after he had signed on to star in his first U.S. movie (which may as well have been titled Bottled Lightning), it was cancelled. His agent and lawyer demanded that he be paid what he was promised. Because he didn’t do what the contract entailed, he could only be paid half (50,000 dollars). It could be argued that the prototypical version of BTTF was in near-complete stasis for two reasons – Eric wouldn’t be paid the full amount, but CGI technology would’ve been developed to the point that he wouldn’t need to finish the film.

It’s not a coincidence that Spielberg was working on Young Sherlock Holmes at the same time. That was the first film to have a fully-realized CGI character. Dean Cundey (the cinematographer) mentioned that Zemeckis wouldn’t film any of Eric’s close-ups in the last week of the production. This was because Gary David Goldberg had already given his approval for Fox to star. If Fox said no, they would’ve shot Eric’s shots later with the excuse being that the release of Mask helped them to find funds for pick-up shots. The fait accompli being the budget cut in the pre-production stage. This got me thinking about another elephant in the room – why are people so nondescript about what scene that Eric tested for?

For all we know, the prom scene was filmed as a screen test so that the makers wouldn’t need to pay any of the cast members (thespians are not paid to do screen tests). Although, it would have made for some interesting meta (i.e. hipster-esque) irony if the screen test was the scene where Marty and The Pinheads audition for Battle of the Bands. In fact, one of the assistant directors (Clyde E. Brian) mentioned that the make-up and hair department had dyed Eric’s hair for the screen test. It’s a strange thing to do. You would think that the responsibility would fall on the actor. There’s a good chance that, if true, the screen test could be incorporated into the unreleased cut like what happened with Richard Donner’s cut of Superman II.