This is the title of a Hong Kong film franchise. In this instance, it relates to a Northern English performer of martial arts and action. His name is Wayne Archer. In the cover (which I had obtained from someone named “Shapes” on the Kung Fu Fandom forum), he is pictured alongside Yuen Biao. Wayne’s T-shirt was printed during a time when the forename of Jackie was spelt with a Y. This changed in 1980 when the director of Battle Creek Brawl (a.k.a. The Big Brawl) told Jackie that the Y is how a girl would spell it. Clearly, someone forgot to tell Robert Clouse that there is a novelist named Jackie Collins. Maybe this would have prompted the man known as Chan Kong-Sang to be known as Jack Chan, but I digress. Wayne had first met Jackie during his Dragon Lord days in 1981, hence the below collage taken by one of his friends – Toby Russell. 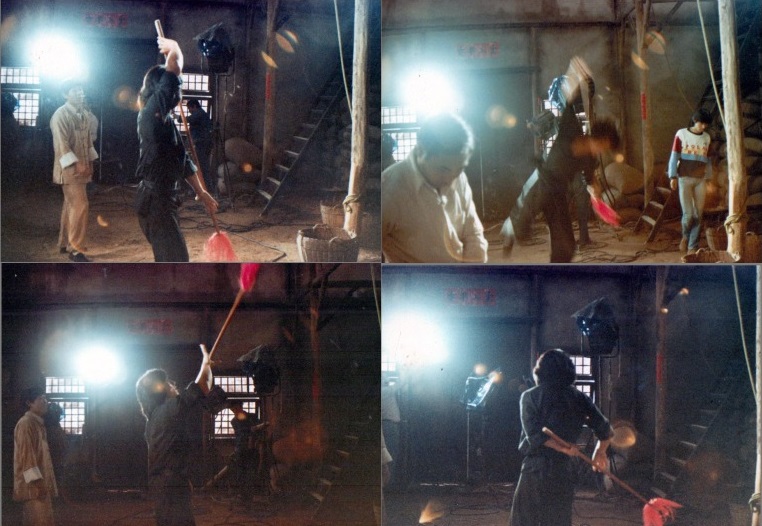 On the KFF forum, Toby (a.k.a. “Shapes”) explained the names of two Kung Fu genres: “That term ‘Basher’ was first coined by Wayne Archer in 1981. It’s stuck in the UK amongst a few very sad and broken people of which I am one. The term ‘Shapes’ was first used in connection to Kung Fu by Sifu Anthony Richards and his students. They were mostly from South London’s New Cross area. In the early 80’s, his disciples practiced the art of shapes. However, Chinese also call shapes: Tiu Sau – Shape Hands. This is used in film titles like Snake in the Eagle’s Shadow.”

I remember Wayne telling me that he enjoyed working with Jackie on Armour of God because the overall atmosphere was positive despite Jackie’s near-death experience, but Wayne’s experience on the sequel (mostly known in shorthand as Operation Condor) was soured by some surly assistant directors. Like in the Dragon Lord photos, Armour of God II sees Jackie wield a spear. I remember that Rick Baker (Toby’s business partner) had posted a still of the sequel on Facebook, to which Wayne responded by saying that he doesn’t rate the movie favourably. By the way, the below photo was taken during the making of the predecessor. The man throwing the punch is a JC stunt team member named Anthony Carpio. Wayne had written his first article for Combat (i.e. July 1992, Volume 18, Number 7). Titled Jackie & I, it provided a source of info for a 1997 book titled Dying For Action: The Life and Films of Jackie Chan, but most of the info was not used by the author (Renée Witterstaetter). 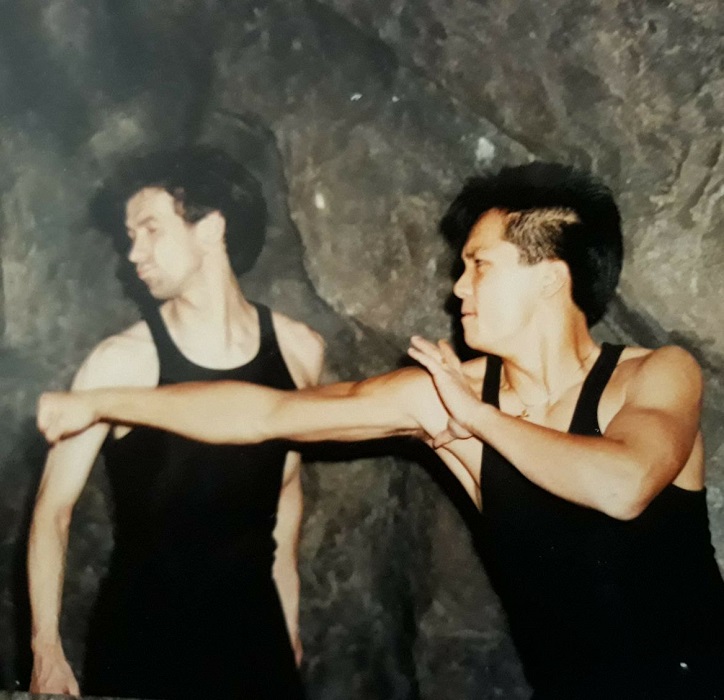 Wayne went out of his way to interview a Canadian who appeared in the sequel which was known in Chinese as Flying Eagle Plan (no shapes here). Wayne interviewed Bruce Fontaine in a Hong Kong watering hole named Hot Gossip. Wayne asked him what was his most memorable experience during the making of the film. Bruce’s favourite moment was when himself and the other Westerners had beaten the JC Stunt Group, Jackie included, at three straight games of water volleyball in a Morocco hotel pool. Starting on day one of shooting, Jackie seemed unapproachable to Bruce and Kenn Goodman. Once the ice broke, Jackie’s icy demeanour started to thaw and they got along like the best of friends. Bruce went on to say: “Between shots, Jackie would sit with Kenn and I, telling us stories of how he came up as a stuntman working for 60 Hong Kong dollars a day then, one day, a director saw him teaching an actor how to show pain. The director told Jackie he should be acting, and that is how it started for him.”

Jackie even confessed that all his stuntmen would drop off a rooftop at the snap of his fingers, but few had the ability to design a good fight scene. Jackie told the two guys that he didn’t want the fights to be too martially artistic, but he still wanted that element of spectacle and power. Bruce said: “Two months prior to Jackie’s film, I had fight scenes in five other movies. Those films required more of me in terms of punching, kicking and stunts. In each of those films, the action directors expressed great satisfaction with my work; so I figured – Hey, I’m ready for Jackie. But I was wrong! Jackie was so much more demanding on a technical level. Timing, angles, expressions…everything. When I finished Jackie’s film, I felt as if I had just graduated college and all the other films were just high school.” 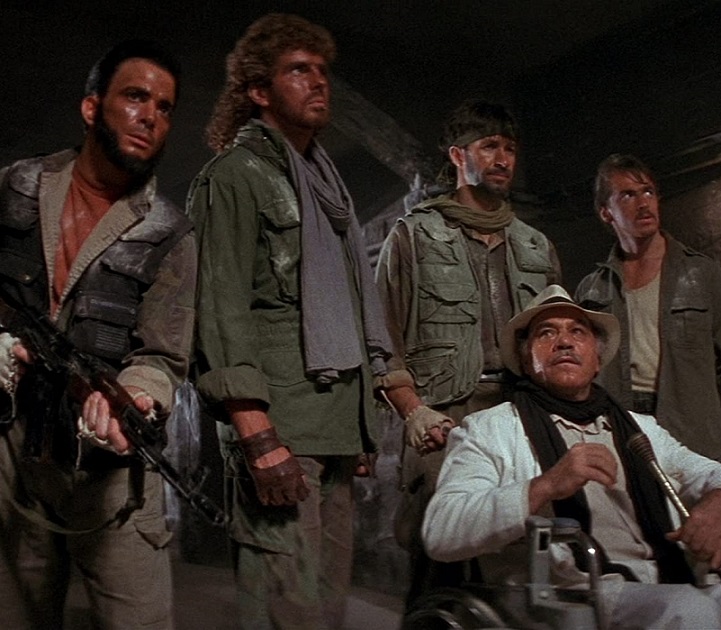 At this point, I should note that Jackie & I isn’t about Wayne’s journey as a Chan fan like Bey Logan’s upcoming book – Bruce Lee and I. Despite what’s written on the cover, the contents page of Combat had it displayed under the title Jackie and Bruce – which may have led (if not intentionally misled) most readers into thinking that the article was about Bruce Lee. That said, Jackie probably learned a lot from Lee about what to do when working with Westerners. Anyway, Fontaine described Jackie’s temperament: “Oh, great, really…and very patient. He would explain everything thoroughly to everyone in the shot so that everyone knew exactly what they were doing, which isn’t always the case with some Hong Kong directors I’ve worked with. He is certainly willing to persevere to get something just right. I think that is the one thing I found most admirable about him.”

Kenn Goodman, a New Yorker, can vouch for this perseverance. It took over sixty takes for Jackie to toss a hairpin into Kenn’s face during an action scene. Most directors would have settled after the fifteenth or twentieth take. The budget for Operation Condor was originally 40 million H.K. dollars but ballooned to 90 million then 115 million, yet the movie only grossed 39 million when released in 1991. When pre-production began in 1989, Golden Harvest hoped that Operation Condor would be the first H.K. movie to gross 40 million, but they were soundly beaten to the punch by Seasonal’s All for the Winner. Released in 1990, it made Stephen Chow such a huge star that it would take five years for Jackie to be Hong Kong’s box office king again (it’s ironic that Rumble in the Bronx made him reign instead of Drunken Master II). 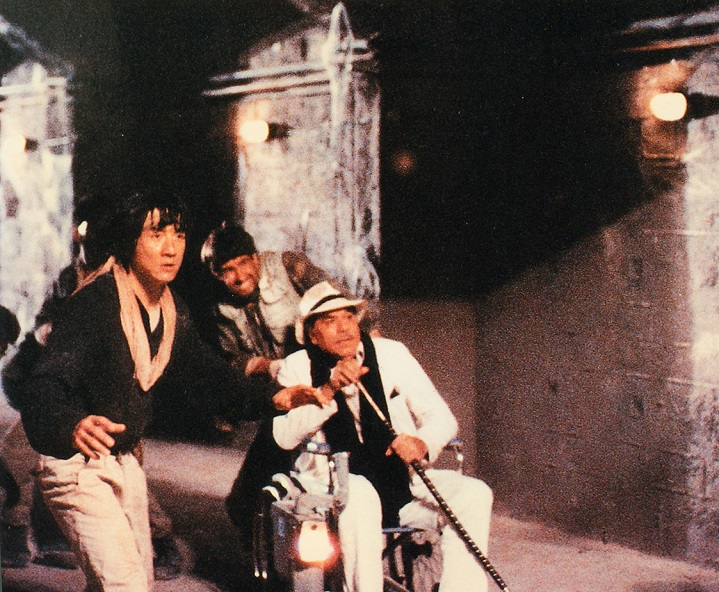 In the May 1991 issue of Martial Arts Illustrated, it was revealed that Mark Houghton turned down Jackie to be the main fighting foe in Sammo Hung’s Skinny Tiger, Fatty Dragon whereas Jeff Falcon didn’t return Golden Way’s calls due to how his role in The Inspector Wears Skirts II had been scaled down from what he did in the previous movie. Similar to Bruce Fontaine, Vincent Lyn said: “Having done many films in Hong Kong, I thought I would be ahead of the game when it became time to work with him, but I was very much mistaken. The first week of filming, I felt I had two left feet. Jackie made me watch the rushes of the previous day’s shooting, and go over anything that seemed wrong or out of context. A few times, we even reshot some scenes to make it even better, which is unheard of in Hong Kong movie-making!”

Despite how reckless that Jackie was with the budget and his body during the making of Operation Condor, he was gentle with the stuntmen. Bruce Fontaine, in one scene, was thrown backwards over a table and, in the process, received a small cut behind the ear. Jackie immediately stopped the shooting and attended to Bruce with a first aid kit. While Bruce felt it was nothing and suggested to continue filming, Jackie insisted on immediate attention to even the most minor of injuries or problems. Understandable considering that a lighting technician had fallen to his death during the making of Jackie’s previous film, Miracles (1989). This is why, for Operation Condor, Jackie had an extra pair of eyes and ears in the form of Frankie Chan, whose directing went uncredited. Otherwise, we would’ve got writers saying: Frankie Goes to Hollywood. 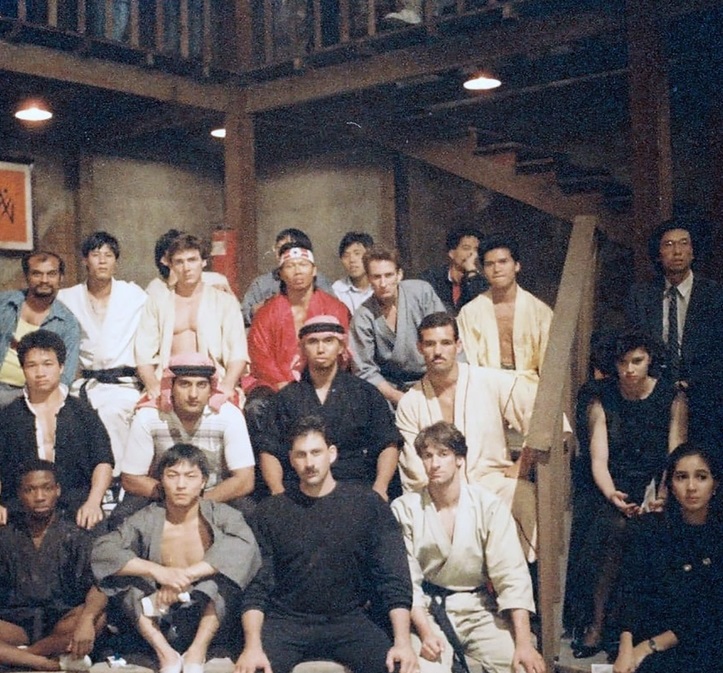 The scene where Bruce, Kenn and Steve Tartalia (another New Yorker) pursue Jackie atop three mechanical see-saw platforms took almost a week to perform and required the coorindation of about 50 crew hands to operate the machinery. Fighting aboard the out-of-sync moving platforms was an experience for Bruce that made him realize that his past and future work would look like a cakewalk by comparison. Bruce can’t give enough credit to Jackie: “In the two years I’ve been here, I’ve done about 12 films. The productions were all of a much lower budget and the talent in those films was somewhat varied. Most of them, however, came off very well; but working with Jackie was, even with the problems, still the best.”

In Archer’s article, Bruce cited three 1990 movies as containing his best work: Curry & Pepper (starring Stephen Chow), In the Line of Duty 5: Middle Man (featuring Steve Tartalia) and Forsaken Cop (which was secretly directed by the producer – Chen Kuan-Tai). Bruce was asked to do a second movie with Jackie, but nothing came of it. City Hunter, with its ample amount of Westerners, would have been an amazing opportunity, but Bruce wasn’t invited. He had been in four other movies with Wayne – Aces Go Places V: The Terracotta Hit (1989), Casino Raiders (1989), Kickboxing King (1990) and Retreat of the Godfather (1991). For those who want to know more about Wayne, read his interviews over at the One Armed Podcast and Golden Ninja Warrior blogs. The uncropped version of the above Bloodsport photo can be found on Instagram if you use the Wayne Archer hashtag.