This article was originally going to be in the 1989 chapter of my English translation of Wong Jing’s 2011 memoir. Literary agencies and publishers have a rule as to how long that a biography can be. The word-count varies from 80k to 100k depending on how famous that the subject matter is. After directing Donnie Yen in Chasing the Dragon (2017), there is a growing feeling that Jing may finally make the leap from Chinese to English language cinema. In that instance, I could probably get away with inflating the word-count to include an epilogue chapter that consists of post-2011 information. Anyway, here are the extracted pages… 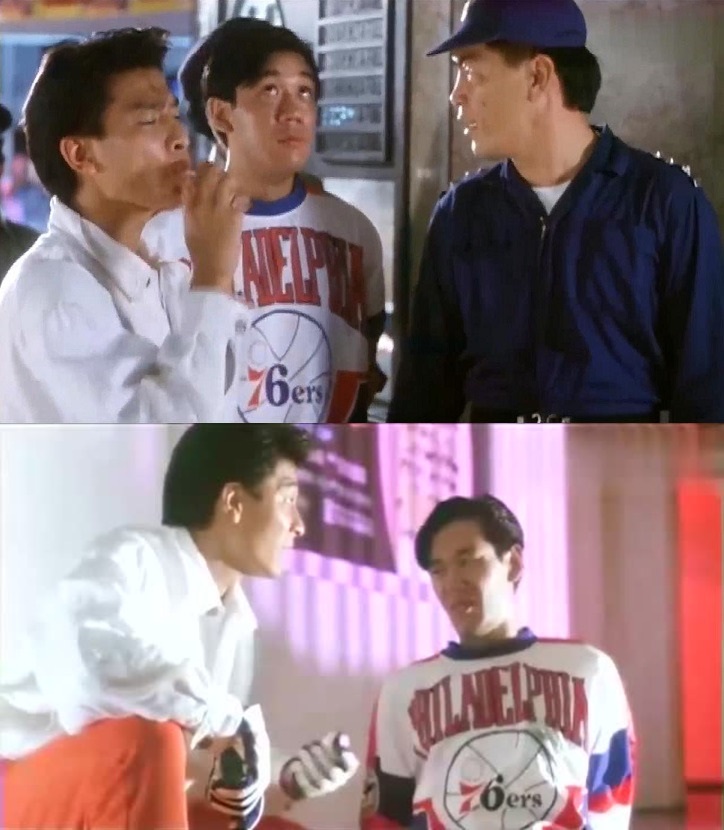 Crocodile Hunter (1989) was where Jing made his mark by being a singular producer for the first time. While it is not a gambling movie, it shares the character development of God of Gamblers in that the main protagonist goes from being superbly suave to comically common after a serious head injury. As was the case with God of Gamblers, Jing was inspired by the premise of a 1960 Chinese Opera film titled The Random Harvest. Jing would repeat this gimmick for Deadly Dream Woman (1992), which was Ken Lo’s favourite among the movies that he was in before he made his biggest impact in Jackie Chan’s Drunken Master II. The character development of Crocodile Hunter is also similar to God of Gamblers in that the protagonist finds himself in a vulnerable position when he is in a parking facility. The villain who confronts him is even played by the same actor – Jimmy Lung Fong. Instead of the protagonist being played by Chow Yun-Fat, the spotlight falls on Andy Lau.

God of Gamblers was released last (i.e. December) but made beforehand i.e. from late August to mid-September. In terms of narrative structure, the most notable aspect about Crocodile Hunter is that the first and third acts are Die Hard scenarios. Besides wanting to cash in on the box office success of Die Hard, the star-making vehicle for Bruce Willis is genuinely one of Wong Jing’s favourite films. It would appear that Jackie Chan’s Police Story had an influence on Die Hard with the innovative destruction of glass. The H.K. movie that was known as Glass Story by its stuntmen was screened at the 1987 New York Film Festival on September 26 and 27 (the weekend). It’s possible that the people behind Die Hard had seen it, because the filming schedule of the Bruce Willis movie went from November 1987 to March 1988. There was enough time to rewrite the script and order panels of glass. Both movies take place during Christmas.

Die Hard would then be bested by a 1989 H.K. movie titled Burning Ambition, which had the gimmick of two barefooted women fighting adversaries on a floor peppered with broken glass. Also released in 1989 was Tango & Cash – a U.S. action film that borrowed the climax of Jackie’s vehicle chase from Police Story. Speaking of the Sylvester Stallone movie, Andy Lau’s character in Crocodile Hunter was influenced by Sly’s bespectacled cop because Jing saw an episode of Entertainment Tonight when he was in America. In the first act of Crocodile Hunter, the most creative moment of action is when Andy’s character whittles down the list of suspect gunmen by using a felt-tip pen to play hangman on his wrist. This is an innovative variation on the tally chart method that John McClane had used in Die Hard. Out of the many movies which were influenced by Die Hard, Crocodile Hunter is the most satirical imitation because it begins as Die Hard in a cinema.

What adds to the satire is that the movie that’s being screened is Jing’s 1987 comedy, The Romancing Star (although it’s difficult to tell on the old DVD release). True to the satire of Crocodile Hunter, there is a scene where Jimmy’s villain dresses up as a phone repairman in a tribute to what Bruce Lee did in Fist of Fury. This was only natural since Robert Clouse’s Game of Death had borrowed that film’s gimmick of having the avenging hero pretending to be an old man. Strangely enough, Die Hard reminds me of Bruce Lee’s first two martial arts movies. Both Bruces representated a new kind of hero in terms of psychological behaviour, although The Big Boss was more ludicrous in action but darker in story. Fist of Fury had a dialogue scene that was shot to look like two people looking at each other when they weren’t, whereas Die Hard recreated this but with two enemies using walkie talkies instead of two lovers talking with their backs turned to each other.

It may be in a Filipino version, since she was popular in the Philippines. With martial arts actor Eddie Mayer among the main heavies, one can only imagine what was left out of the H.K. version. Perhaps there was an alternate denouement as was the case with some versions of a 1990 Yuen Woo-Ping movie titled Tiger Cage II, where it was Cynthia Khan and not Donnie Yen who fought Robin Shou. The Taiwanese version of Crocodile Hunter contains no extra action but it does contain more comedy overall. The best one-liner in this version is one that reflects the capitalistic society of Taiwan. Playing the role of a superficial actress loosely named after Taiwanese actress Brigitte Lin Ching-Hsia, Alvina Kong Yan-Yin (as Lin Chia-Hsin) pleads to one of her captors: “You can rape me but don’t steal my money.” 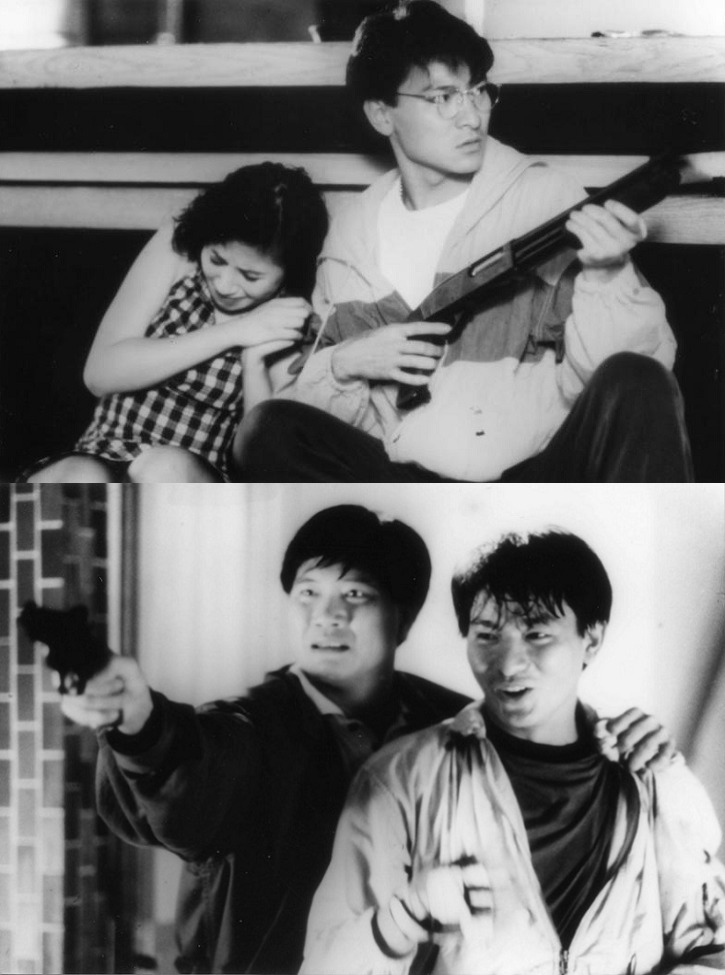 The main actress in both versions, however, is Sandra Ng, who rivals Alex Man’s status as the co-star in the Taiwan version. As of now, Sandra has acted in 17 movies which Wong Jing directed. She is Jing’s most talented comedienne, and Crocodile Hunter was really the best of her `80s work with him since she was free from having to play a small part in an ensemble of actresses that usually confront an entourage of men. She is the closest that he has ever got to finding the female equivalent to Stephen Chow, who has acted in 14 movies with her (4 of which were created by Jing).

Wong talks about her: “What we both have in common, besides our sense of humour, is that we have acted in ten movies with our fathers. Surprisingly, none of these movies overlap. Her father, Ha Chun-Chau, was directed by mine for a 1957 movie which was called The Coffin Spirit Bears a Son. Ha Chun-Chau wasn’t a director. My father and Sandra acted in a 2006 movie called The Shopaholics. Ha Chun-Chau acted in a 1995 movie which I produced and wrote. It was called Lover of the Last Empress. With hindsight, it should have been more like Caligula.”

As for Crocodile Hunter, it is notable for how Jing decided to incorporate Bruce Lee’s projectile idea from The Way of the Dragon i.e. using wooden darts to counteract guns. Previously, Bruce inspired Jing to surpass the double nunchaku fight in The Way of the Dragon for Winner Takes All. It’s all too easy to focus on Jing’s many imitations (or should that be limitations?) but he has proven to be influential in terms of quality if not quantity like John Woo. Without spoiling it for those who haven’t seen either movie, the opening shot of Crocodile Hunter had influenced the one in Striking Distance (a 1993 Bruce Willis movie) whereas the idea of using a bungee cord during a shootout was recreated in the first Tomb Raider movie (whose sequel had Simon Yam in a small supporting role). As for home turf, the gimmick of using a flashlight in a shootout would later inspire Corey Yuen’s The Bodyguard from Beijing.

Elsewhere, God of Gamblers inspired Stephen Chow to make a movie titled The God of Cookery (1996). However, the concept of mixing cookery with Kung Fu stemmed from Tsui Hark’s The Chinese Feast (a 1995 film which had a caricature of Jing named Wong Wing). Stephen hired Tony Poon Kin-Gwan to be the action director of The God of Cookery. Sammo Hung couldn’t be hired because he was too busy working with Jackie on Mr. Nice Guy (1997), where Jackie plays a chef. Previously, Sammo choreographed a kitchen fight in Michael Hui’s The Private Eyes (1976). The process had become full circle when Jing wrote and produced The Lady Iron Chef (a 2007 rom-com where Yuen Qiu’s character is named after Lin Ching-Hsia). Once again, Tony Poon was hired to action direct. This movie paved the way for Sammo to star in Ken Yip’s Kung Fu Chefs (2009).

Back to Crocodile Hunter, it is one of several Wong Jing movies where he wanted an actor so badly that he was willing to cast a lookalike if the desired choice was unavailable. In this instance, Alan Tam was unavailable for the role of Stalled Engine Te, so Jing had cast Cheung Kwok-Keung (a.k.a. K.K. Cheung). The other movies where Jing strove to hire a lookalike are The Seventh Curse (Brigitte Lin was wanted before Sibelle Hu), My Neighbours Are Phantoms (Nina Li Chi before Sharla Cheung Man), Dances with the Dragon (Carol Cheng before Deannie Yip), Perfect Exchange (Waise Lee before Wan Chi-Keung), Kung Fu Cult Master (Yen Shi-Kwan before Zhang Chun-Zhong) and Whatever You Want (Maggie Cheung before Sheila Chan).

One of the bad guys in Crocodile Hunter, Li Peng, is named after the man who was responsible for the Tiananmen Square massacre in 1989. Known as the butcher of Beijing, Li Peng was so vilified that he became the name of despicable characters in several other Hong Kong movies including Return Engagement (1990) and A Rascal’s Tale (1991). On a more serious note, the massacre influenced a spate of movies to reference it e.g. How to be a Millionaire (1989), The Iceman Cometh (1989), Jail House Eros (1990), Bullet in the Head (1990), Jing’s The Big Score (a 1990 tragicomedy), Her Fatal Ways III (1992) and Mary from Beijing (1992). This is probably proof that capitalism is just as callous as communism.

Jing’s Crocodile Hunter, despite having average success at the H.K. box office, would later inspire other H.K. film-makers to have shootouts that take place in a cinema. These movies are Tian Di (a 1994 David Lai movie also starring Andy Lau) and City Cop (1995). All in all, it’s both ironic and impressive that one of Jing’s non-best movies is somehow one of his most influential when you also factor in the influence that it had on the aforementioned Striking Distance, The Bodyguard from Beijing and Tomb Raider. If for nothing else, Crocodile Hunter deserves to remembered for delivering a 180 degree turn from the `80s teen movies where a nerd becomes cool.