The U.K. title for Wong Jing’s Holy Weapon (1993) was Seven Maidens, but the title of my article works on three levels altogether. The title references two other films – Stanley Donen’s Seven Brides for Seven Brothers (1954) and Tsui Hark’s Seven Swords (2005). Coincidentally, the Italian title for Jing’s Kung Fu Cult Master (1993) is The Seven Swords of the Vendetta. Twenty years later, Jing made a movie titled Princess and Seven Kung Fu Masters (featuring Sammo Hung with fights choreographed by Phillip Kwok). On the subject of all things seven, Michelle Yeoh mentioned in an old interview that she had more fun during the making of Holy Weapon than she did on Wonder Seven (1994). Michelle liked working on Jing’s movie more because she had the chance to work with four legendary actresses – Carol Cheng, Sharla Cheung Man, Sandra Ng Kwun-Yu and Maggie Cheung, who Michelle also worked with alongside Anita Mui on The Heroic Trio (and its sequel titled Executioners). Furthermore, Michelle found it so refreshing to work on a movie that wasn’t serious all the time. 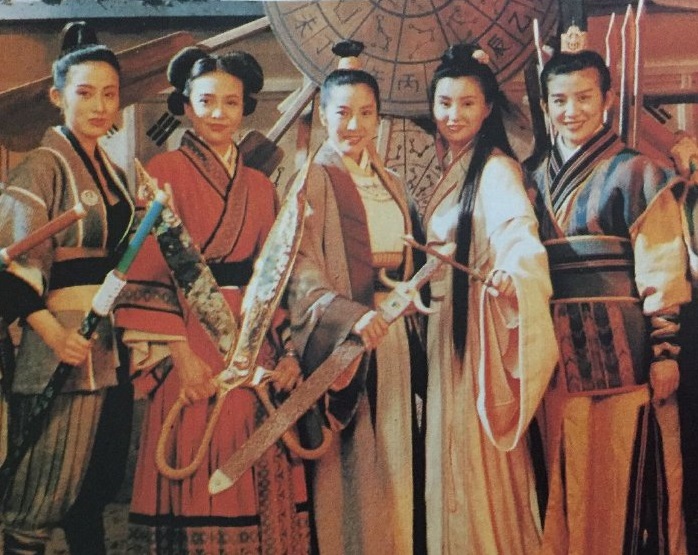 1993 was the most exemplary year for Wong Jing as he also proved that he could make a great female-driven action movie. Holy Weapon more than doubled the box office intake of Dragon: The Bruce Lee Story. Both movies had the same Hong Kong theatrical release life-span i.e. June 3 – June 23. Rob Cohen’s biopic grossed H.K.$ 4,585,782 whereas Jing’s movie grossed H.K.$ 9,817,166. With Jing being such a fan of and expert on Bruce Lee Siu-Lung, I can only imagine how hard that he laughed at the sanitized portrayal of the late little dragon (i.e. little dragon in Cantonese is Siu Lung). While Holy Weapon was something of a box office disappointment, it played really well over in Taiwan. A notable aspect of the movie is that, despite being made on a small budget, it captures the visual style of a comic book without using digital effects. This is due to the usual H.K. mastery of lighting and camera speed. More specifically, undercranking the camera instead of overcranking it.

My only complaint is that Maggie Cheung should have been replaced by Sheila Chan because the latter is a better comedy actress. However, Jing wanted as many big female names as possible. He originally wanted Joey Wong Cho-Yin for the role of Butterfly as a reference to her character in a movie that she had done with Michelle in the previous year i.e. Butterfly and Sword (which was released in January of 1993). Sadly, Joey was too busy alternating between acting in Green Snake and Painted Skin. Which is why Jing should be lucky that Michelle had the time to work on Holy Weapon since, like Jing, 1993 was her most prolific year as well. She starred in Executioners, Project S, The Tai Chi Master, Wonder Seven and Wing Chun. Released in June, Holy Weapon was filmed at the beginning of the year. The final action sequence triggered a recurrence of her spinal injury (which she suffered during a ballet practice session at her college years). This injury affected her in three other movies.

During her final scene in Executioners (which began filming near the end of 1992), the stuntman who was lifting her had accidentally touched a sore point on her injured spine. The pressure and pain caused her to have spasms before vomiting. On a Beijing location shoot during the making of Wing Chun, the pain was so bad that she could not move at all. So someone else had to stand in to film the scene where Wing Chun met with her teacher, played by Cheng Pei-Pei (who would later work with Michelle on Crouching Tiger, Hidden Dragon). Upon her return to Hong Kong, Tony Ching Siu-Tung and company were waiting for her to start filming Wonder Seven towards the end of 1993. Not wanting to disturb that film crew’s plans, she went to work. She ended up re-injuring her spine while shooting a scene that required her to fall into water. When she finally went to see a doctor, he was surprised at how she had managed to withstand pre-existing pain for so long without seeking medical attention. She was ordered to stay in hospital for a week.

The irony about Holy Weapon is that Jing gets blamed for a script written by Lam Wai-Lun, who would later direct Jing’s script for Satan Returns (a 1996 movie that Donnie Yen worked on as actor and action director). Dennis Chan Kwok-San, who played Jean-Claude Van Damme’s instructor in Kickboxer, was one of the three planners for Holy Weapon and directed enough footage to be deserving of a directorial credit. Like most H.K. movies, Holy Weapon is a multi-genre spectacle. It has a bit of drama, traces of romance, a generous heap of stunt-work and lots of comedy; especially horror (in one scene). The VCD version has an unusual beginning where we read the cast and crew list via someone turning the pages of a Chinese book (where the reading begins from the back). 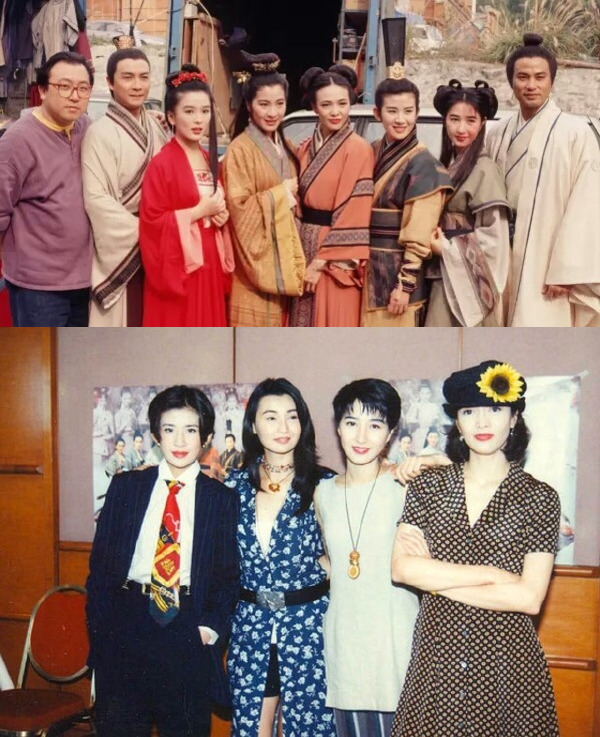 As per usual for Wong Jing, there are elements derived from other movies. The Thing and Evil Dead II are comparable to the point of being compatible movies to derive from. As was the case with Jing’s Future Cops and Kung Fu Cult Master, Holy Weapon is also derivative of anime (Wicked City and Six God Combination), but this could easily be perceived as parody instead of plagiarism due to the fact that Holy Weapon is a comedy. Jing’s best female-driven movie is reminiscent of Sammo Hung’s Spooky, Spooky (1988). The latter also had elements derived from Back to the Future, The Thing and Evil Dead II. Sammo’s movie also gives nods, if not blatant shout-outs, to Ghostbusters, Poltergeist and Quincy, M.E.

Back to Holy Weapon, there are even allusions to Western literature (i.e. Snow White is referenced before Cyrano de Bergerac but after Beauty and the Beast). This serves to broaden the Western accessibility. From an Eastern perspective, Holy Weapon is a parody of the Wuxia genre i.e. Chinese stories which incorporate elements of fantasy and swordplay e.g. a novel titled The Heaven Sword and Dragon Saber was adapted by Jing in 1993 as Kung Fu Cult Master. In particular, Holy Weapon is a comedic interpretation of a 1967 film titled Seven Princesses (which was divided into two films).

One of the stars of Seven Princesses was Josephine Siao Fong-Fong. She appeared in Fong Sai-Yuk (1993), which starred Jet Li and referenced Jing (who was one of the producers despite preferring to have his name taken off the credits). Because of the reference, Jing decided to indirectly reference the lesbianic subtext of Fong Sai-Yuk in Holy Weapon. The subtextual scenes in Fong Sai-Yuk were directed by a female director who claimed to not be a lesbian despite directing a 2010 lesbian drama titled All About Love. This director was Ann Hui. Back to Holy Weapon, if Dennis Chan was the only credited director then this movie would’ve been hailed as a feminist masterwork.

The biggest action sequence incorporates a giant crucifix, a burning Ferris wheel and human vultures. Ching Siu-Tung was hired to be the stunt co-ordinator because Swordsman II (1992) was very profitable at the box office. The star of the latter had her character’s name in Boys are Easy named after him. Brigitte Lin wasn’t offended because it wasn’t like Ellen Chan being named after Yoshiko Kawashima in The Love that is Wrong (1993). Ching wasn’t offended because he was spared the embarrassment that Mona Fong Yat-Wah experienced when Tony Liu Jun-Guk named a Japanese virago after her for a Category III movie titled 1/3 Lover (1993). In the `80s, Mona produced movies which Tony wrote and directed. Like what Jing said in his 2011 tell-all, she had many enemies…himself not included. 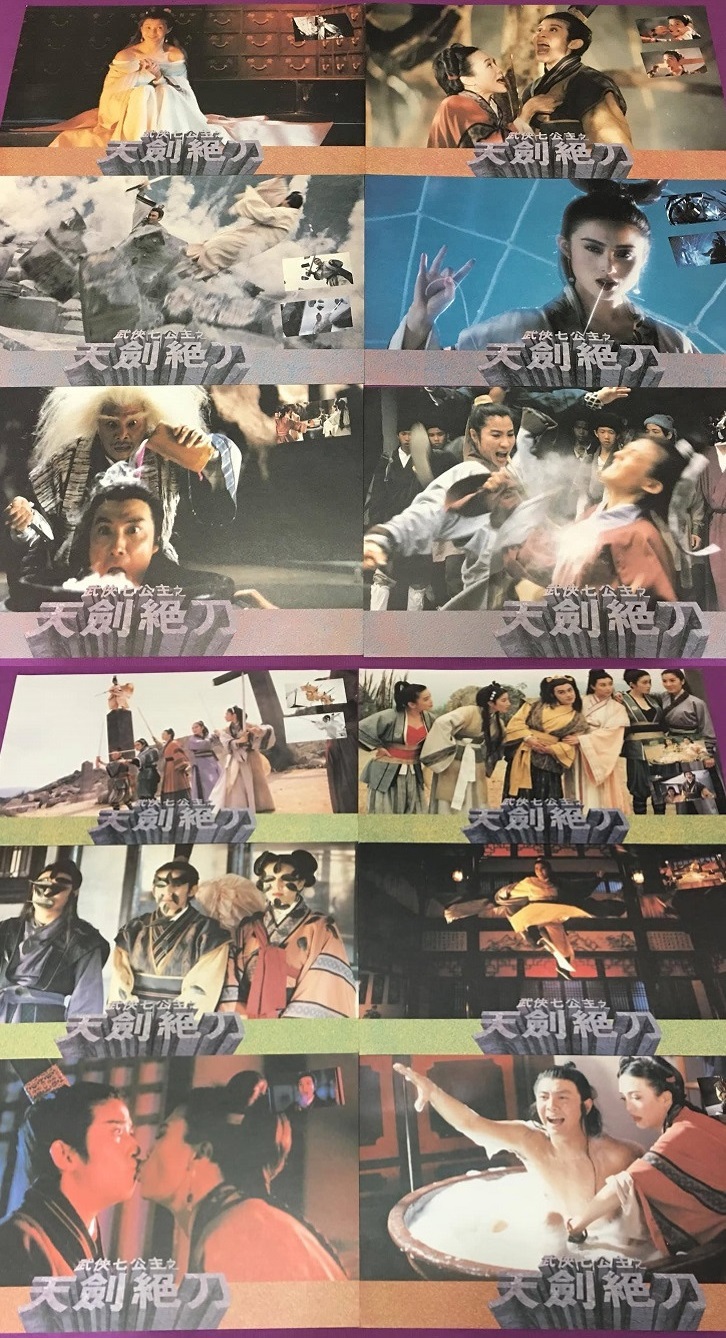 Holy Weapon is Wong Jing’s most femininely appealing film. Even other martial arts movie directors (such as Jackie Chan and Sammo Hung) can’t claim to have directed a movie which is as feminine as this. The crossdressing allows for a role reversal where a woman tries to force herself onto a man. The cross-dressing theme allows Jing to allude to transsexuality as well as homosexuality. As a result, the film contains lesbianic subtext as well as a conversation between a man and his penis. The latter is a homage to a 1992 H.K. movie titled Talk to Me, Dicky (a remake of a 1988 German/American movie titled Me and Him).

Back to Holy Weapon, the dialogue indirectly describes sexual enhancement chemicals as the greatest drugs. The script makes a point about how men become emotionally dead in the pursuit of obtaining power, whether it’s the sexual kind (e.g. resulting in infidelity) or otherwise. In another scene, sperm is described as invincible silk worms. A comic scene (vaguely similar to a scene in The Thing) could even be seen as a metaphor for an AIDS test. As an example of social commentary, one of the most disturbing things about the movie is that it highlights how some men are so confident about seducing women that they describe their confidence as fortune-telling.

Less disturbing is a supernatural scene that provides the basis for two Cantonese idioms regarding flowers – opening a flower bud (i.e. having sex with a virgin) and male flower (i.e. an attractive man used in a set-up to defraud or cheat a woman). Ironically, the man is a woman due to a Chinese opera tradition (e.g. Sandra Ng’s character is named after a crossdressing actress named Yam Kim-Fai). As for the star of the movie, Michelle’s character is a woman who describes herself as a killer of heartless men. She claims that she killed forty-seven men in three months. This is a strangely specific number if not for the fact that the number had already become known as a running gag in Star Trek: The Next Generation.

Elsewhere, another female character uses seduction to defeat an enemy. This is a nice little nod to Wong Jing’s Naked Killer, which was made and released in the previous year. Ironically, it was Wing Chun and not Naked Killer nor Holy Weapon that was screened at a gay and lesbian film festival in Florida on Wednesday, October 9, 1996. Wing Chun was selected because the protagonist is a strong woman. This was four months after Supercop was released in U.S. cinemas. In March of 1999, Michelle was on the cover of a San Francisco magazine called Girlfriends.