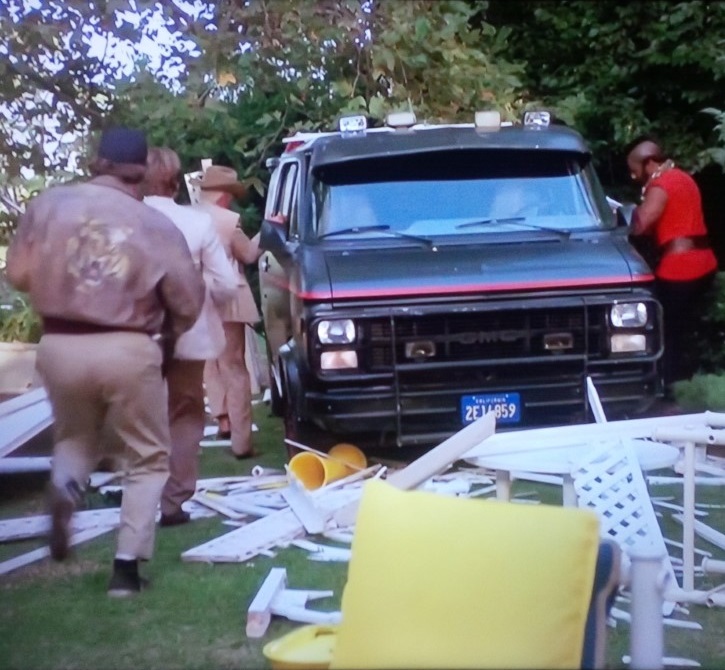 1) TV sets were so small that you could get away with stunt doubles and stand-ins, hence the above shot from this 1983 episode of The A-Team – The Taxicab Wars. You could also get away with vehicle stunts involving mannequins.

2) TV sets used to be so small that you could add dialogue to a person’s closed mouth provided that there was a considerable amount of distance between themself and the camera. Season 1 of CHiPs and Miami Vice are memorable examples. It’s precisely because TV sets were small that you could change a person’s dialogue without people realizing it. It especially helps if a scene is filmed in a way where you can’t lip-read. The best example is the dialogue scene between John Vernon and Charles Napier at an outdoor function in Labor Pains (a Season 2 episode of The A-Team) because they’re walking down a hill from a diagonal angle at a far distance from the camera.

3) Regardless of whether we’re talking TV of the last century or this century, you will often find examples of dialogue that can be heard but not seen. In other words, you wouldn’t know that they were talking if the sound of your TV was mute. This is usually because the writers were running out of time when writing the script or because the creative team were open to ad-libbing. There was a Season 4 episode of CHiPs (Episode 7: Satan’s Angels) where a final exchange in a bar appeared to be a moment of such improv.

4) If you ever wondered why old TV shows reused the same actors but in different roles, or recast them rather, this is because enough time would have gone by that the audience would have forgotten about it. The average viewer has a busy life regardless of whether they have lives outside of their home or not. If they are homebodies, especially couch potatoes, they would have seen so many hours of TV that they would be slow to put two and two together. There’s only so much that the brain can retain, which is why we often had TV shows which began with recaps. Elyssa Davalos memorably played two characters in Season 3 of MacGyver. The showrunners should have changed the airing order of the episodes because a fortnight wasn’t really enough to make people forget.

5) CHiPs had episodes where celebrities were attending charity functions of fun kinds, but the celebrities didn’t realize that they were being filmed as part of a scripted show. They thought that they were appearing on the news. The Season 3 Roller Disco episode is proof. Not only were the celebrities not credited, but there is an awkward attempt to make one of the celebs participate in some dialogue. Within the context of the storyline, a DJ is trying to get the attention of Cindy Williams. In reality, someone behind the camera called out her name so that she could turn around.

6) You will often get TV shows in the past where they couldn’t afford to film an establishing exterior shot, so they simply took a photograph of the location. You could always tell because there were no moving artefacts in the image, especially when the post-production team zoomed in on the photo i.e. the scan part of the term known as pan-and-scan.

7) Sometimes footage needs to be slowed down because the director said “Cut” too early or because something messed up the shot that would result in an awkward cut if things were played in normal motion. This often results in a fade-to-black moment or even a dissolve. Similarly, reaction shots can be reused in a single scene because not only is it cheaper but it makes editing easier.

8) Although TV is prone to more close-up shots than the big screen, it’s not just so that you can make a person’s face stand out more. Often, actors can forget their lines, so having more than one close-up shot is often seen as being cheaper than doing many takes, especially if you don’t want to annoy their screen partner. This is especially useful when actors are prone to corpsing – laughing at how funny that their lines are. Even for just one close-up shot, you have to avoid doing more than one take by getting the actor to rehearse their lines so many times that it doesn’t make them laugh anymore.

9) It’s impossible to stage a big sports event because you would have to pay so many extras, so it’s best to get to a real sports event and pretend that you’re making a documentary. They even do this in films like Days of Thunder, John Woo’s The Killer and Fist of Fear, Touch of Death.

10) In Season 1 of Hawaii Five-0 (Episode 16: E Malama), there was an attempt to make it look like Mariana Klaveno was witnessing an outside murder through a window. Due to the problematic logistics regarding angles and not wanting the crew to be seen, the only way that the window shot could have been filmed was to film two separate shots and have them overlapped simultaneously. Besides the moving exterior angle, it was pretty obvious that it was fake anyway due to the lack of window texture. 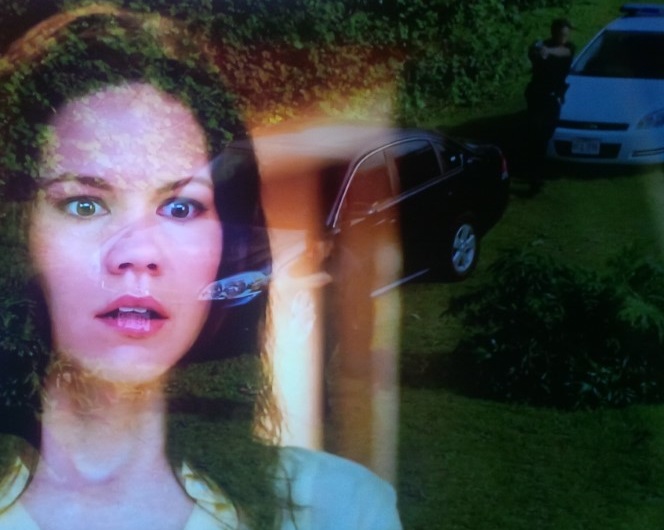 11) In the old days, a TV series would be shot on film and transferred to video so that tapes could be sent to TV stations. This cheapened expensive shows like MacGyver and Star Trek: The Next Generation. Both shows ironically benefited from this because they often had shots involving fake backgrounds, whether it be matte paintings or projected backgrounds (à la the average chase scene in The Dukes of Hazzard). When you transfer film to video (i.e. the telecine method), a certain percentage of visual information is lost. This is why fake backgrounds tend to look better on video than on film because the line of reality is somewhat blurred between the foreground and background.

12) With old TV shows, you could get away with fake newspapers regurgitating some paragraphs because nobody had the technology to freeze or rewind unless they went out of their way to record the shows. It’s easier nowadays.

13) One thing that doesn’t get mentioned about the casting process on television is that you want an actor whose voice won’t sound squeaky when the transference is made from NTSC to PAL formats. Raspy voices are fine for comedies but laughable for dramas. In the U.K. market and Region 2 markets in general, TV shows and films tend to be played quicker because PAL presentations are played at 25 frames per second versus NTSC’s 30 frames. British viewers are always taken aback by how low a woman’s voice is in NTSC, and how deep a man’s voice is in that format.

14) To avoid the audience seeing shadows of crew and equipment, they should always film facing the sun. If you can’t handle the light or heat then use the zoom feature so that viewers can’t see the illusion-breaking shadows.

15) In today’s world, some TV shows are so frugal that they use digital video cameras for insignificant shots as opposed to using digital cameras which have a fake film aesthetic. You can always tell when they use different cameras due to the lack of fake film grain and the faster motion of frames per second (as can be expected with video).

16) Watching CHiPs was significant for me because I learned that you can scan a shot, which is basically a zoom effect that’s done in post-production rather than during filming. There is a Season 3 episode called E.M.T. where a class of students has a few attractive women. The producers thought that the audience didn’t get enough of the women so the shows were shown in a zoomed format, and you can tell because the amount of film grain makes you feel like you’re watching it through a magnifying glass. This method was done for Robert Clouse’s version of Bruce Lee’s Game of Death when the decision was made to make sure that we don’t see his comrades-in-arms. Back to CHiPs, they could have filmed actual close-up shots, but it was cheaper to scale down a medium shot or a long shot. With other TV shows, a scanned shot is done to hide a mistake such as a lowered boom mike, an attention grabber or a small set where the edges can be seen.

17) You will often find non-verbal reaction shots played in reverse because it would make more sense for a character to go from looking at one thing to another thing. This effect is either done because the actor made a mistake with the coordination or the director decided that it would be more effective or meaningful i.e. seeing someone go from being introspective to being an extrovert. You see this happen a bit with some episodes of Psych.

18) When a show depends heavily on any famous person to make a special guest appearance, you sometimes need to film their stuff separately; especially if a famous person is so busy that they drop out at the last minute. This way, people won’t be able to tell the difference if the regular cast members were acting under the impression of seeing a particular celebrity. Look at the reboots of Hawaii Five-O and MacGyver, they avoided showing us the face of the main character’s surviving parent because casting had yet to be finalized. This also happened in Psych except Shawn Spencer’s father was still alive when he saw his mother at the end of season 2, although we never saw her until season 3.

19) You will often find stock footage used in action-oriented shows, and this is easier to hide if you’re using the same film stock as the original makers whether it be a shot from Airplane as seen in The Beast from the Belly of a Boeing (a Season 1 episode of The A-Team) or even just documentary footage in an episode of MacGyver (although they would sometimes steal from old movies without even mentioning it in the credits unlike the makers of The A-Team).

20) In an editor’s book about acting, How to Avoid The Cutting Room Floor, Jordan Goldman revealed that some directors will advise the cameraman to not cut straight away when the director says cut. This is because you will occasionally get a moment of speech or body language that lends itself naturally to a scene. The best example that I can think of is a Season 3 episode of Baywatch called Kicks (which featured martial arts movie star Loren Avedon). In the final training session, Pamela Anderson throws in some surprise punches that causes David Charvet to jovially look at someone behind the camera. 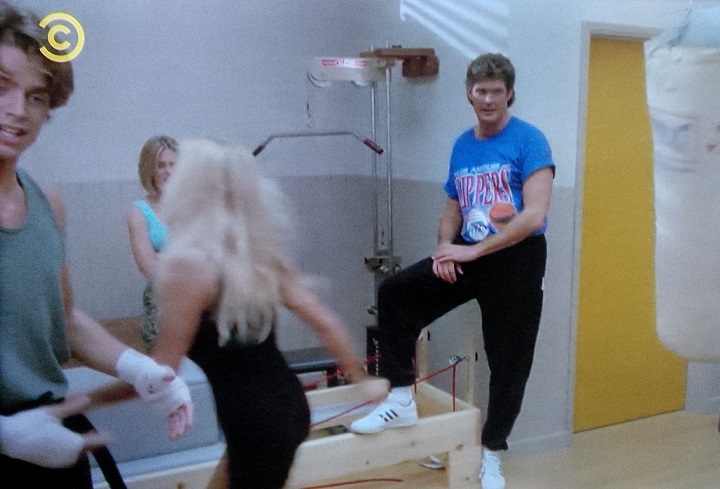 Final thoughts: Back in the twentieth century, very few TV shows outside of soap operas and sitcoms were filmed in the video format (i.e. excluding chat shows, game shows, news shows and documentaries). They might as well have been since the tradition tended to be having something shot on film before putting it on many tapes to send to TV stations. The eighties reboot of The Twilight Zone was shot on video. In Britain, the equivalent was Tales of the Unexpected. When you think about it, a lot of nineties TV shows got cancelled because it was expensive to shoot on film. The cruel irony being that soaps are less likely to get cancelled. A lot of TV movies and costly music videos could have benefited from being shot on video. There’s a reason why Saturday Night Live still airs.